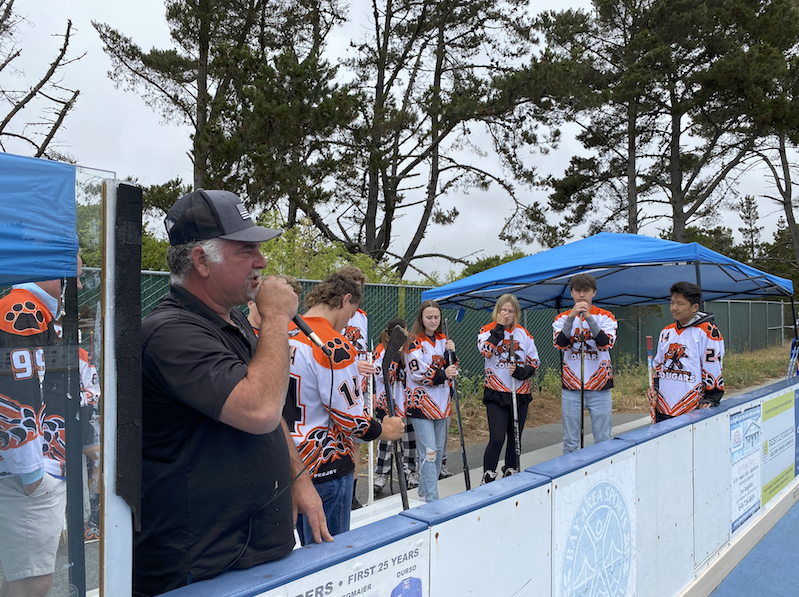 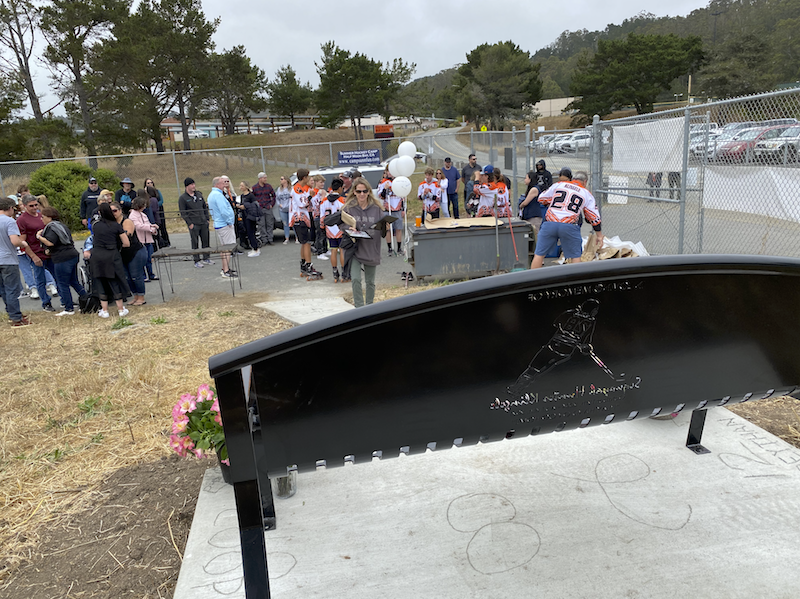 A bench and other reminders of Klingele's life will remain at the rink below Half Moon Bay High School. Photo courtesy Young Park / Hexa Communications

Sequoyah Klingele was passionate about hockey. Now, a memorial bench and exhibit from his teammates has been installed at the hockey rink near Half Moon Bay High School.

The exhibit, unveiled during ceremonies on Sunday, holds the team’s hockey sticks, his jersey and a puck. The words “play hard or go home,” a motto for athletes everywhere, is etched on the memorial bench with the dates of his Klingele’s life — Oct. 12, 2004 to April 6, 2021. A cement walkway with the team members’ names engraved leads up to the memorial bench. A balloon the teammates signed was released as a tribute to the teenager.

Coach Mark Modena said a few words in tribute to Klingele as the puck was being passed around the rink. He said what happened to the 16-year-old Klingele can happen to anyone, all the players have caring parents in their lives, and urged the teammates to be careful about the choices they make.

Klingele died of an accidental drug overdose in La Honda, according to his aunt, Kathy Klingele. She said she learned he and other teens had been setting up deals to buy methadone, originally intended for hospice patients, and secobarbital. She said the drug deals were made over social media.

“The more I hear, the more outraged I am,” she said. “We need to get the word out to the youth and parents.”

Speaking of the tribute his friends held for her nephew, Klingele said, “Sequoyah had the most heart and soul of any player. He was looking at scholarship offers for ice hockey. It was his life. He loved hockey.”

Modena said Klingele has been playing ice hockey since age 8, when he switched over from rollerblading. Modena said he will miss the young man.

“He gave you his whole heart as a player. He gave you whatever you asked. He was one of those rare players who would do that,” he said.

Modena said Klingele went with him to see the Junior Olympics and often took family outings together.

Dirk Kriet, who coached Sequoyah Klingele on the travel team, the Half Moon Bay Cougars, remembered the young player always had fun.

“He was a super competitive kid. All the kids wanted to be with him. From a hockey standpoint, no one could take the puck away from him. He could skate anywhere,” he said. “He was always smiling.”

In 2019, Klingele was a crucial teammate on the Redwood City Black Stars, an ice hockey team that won the state championship game when he was a freshman. In one critical juncture, he intercepted the puck mid ice, swung left and let an outside wrist shot fly past the Tahoe Grizzlies goalie for the win. He finished the season with one of top point totals in the state for defensemen. He was awarded the state championship game puck for his strong performance.

Amy Risk played with and against him for 10 years.

“Everybody wanted to be on his team. He was always smiling,” she said.

Marina Pokovny is a classmate who started a GoFundMe online campaign to pay for the memorial bench. She raised $13,000. There is money left over to commemorate him in a basketball award to be given each year to a Sea Crest student.

“He loved basketball,” she said.

Those who played with and against him said on Sunday that they will miss the passionate player.

“He was fun on the hockey team,” said Moss Michelsen, “He was a good person. I’ll miss him.”

Alex Stevens said, “The bench is a way for him to live on and stay with us forever.”

“The Half Moon Bay rink is an incredibly tight community,” said coach Jeff Stevens. “Sequoyah was a huge part of it. We were lucky to spend 10 years playing with him.”

His dad, Kenny Klingele, said the teens who remembered his son should remember to make good decisions.

Canadian country singer Jay Smith paid tribute to Klingele with a song posted to Facebook. The lyrics read, in part, “I’ve got my teammates by my side, so you don’t have to cry, leave the light on and leave my stick out by the door.”

Jane Northrop has covered Pacifica for the Pacifica Tribune since 1996. She has won first place John Swett Awards from the California Teachers Association for her coverage of education.