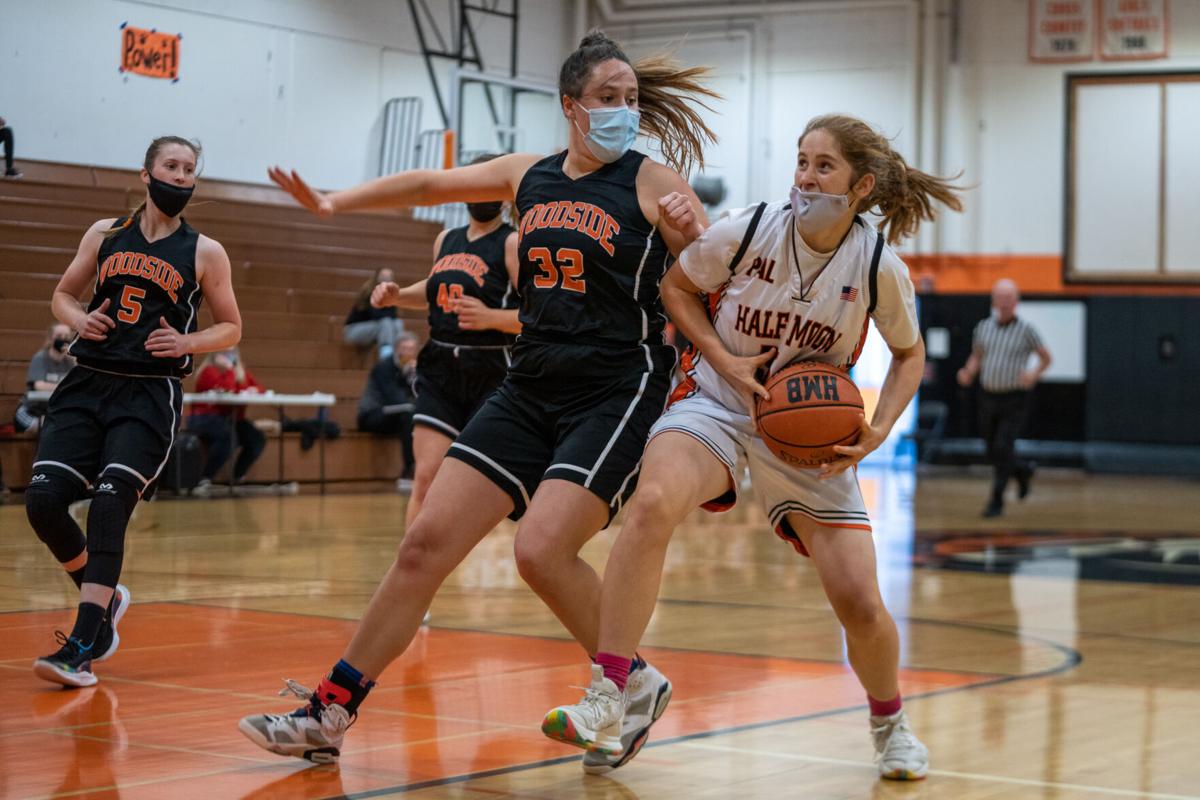 Half Moon Bay's Alli Dioli drives the ball toward the basket for a layup during their win against Woodside High School at home in Half Moon Bay on Friday, May 28, 2021. Adam Pardee / Review 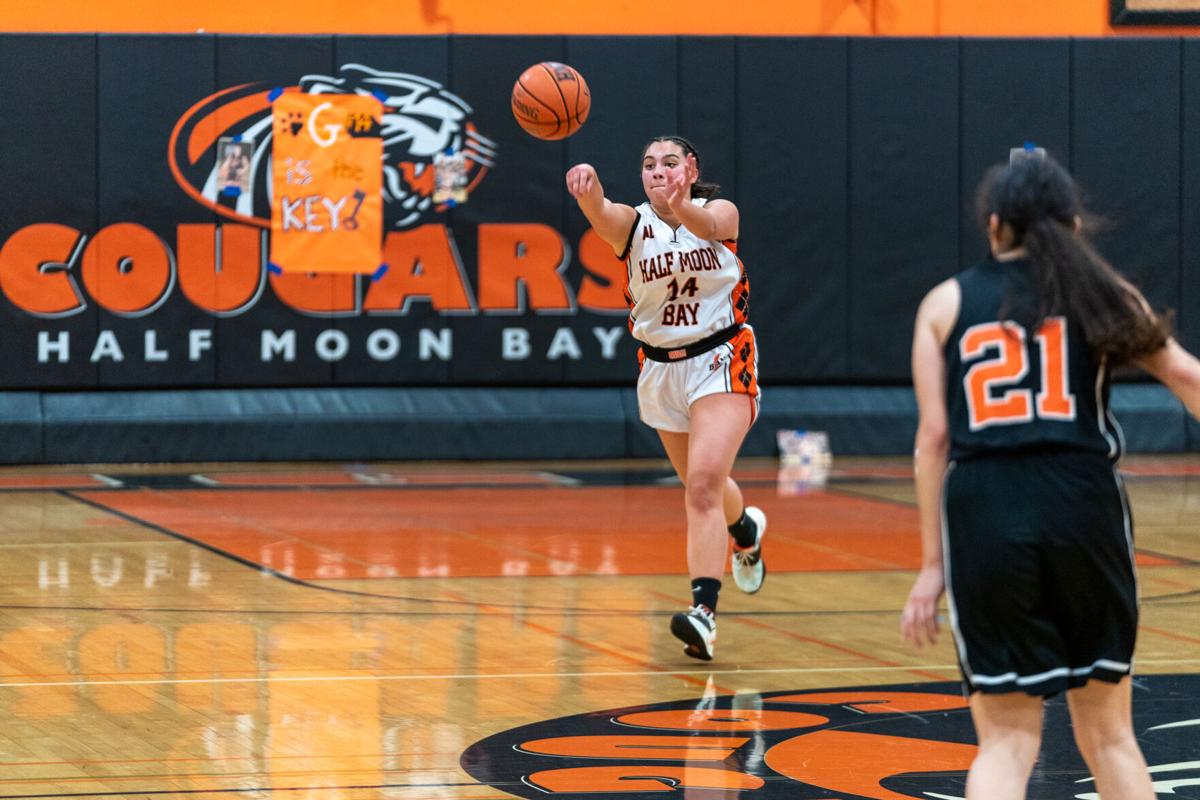 Half Moon Bay's Genevieve Belmonte passes the ball down the court during their win against Woodside High School at home in Half Moon Bay on Friday, May 28, 2021. Adam Pardee / Review 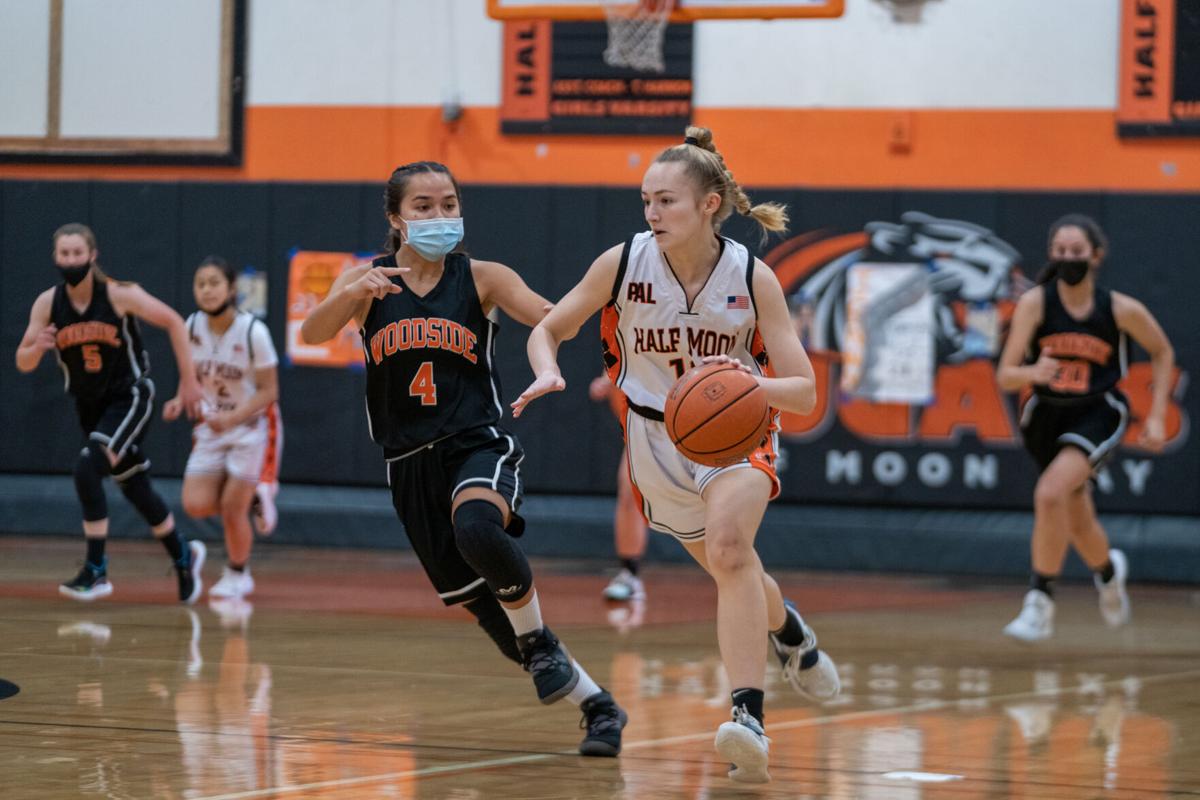 Half Moon Bay's Abby Kennedy on a fast break toward the basket during their win against Woodside High School at home in Half Moon Bay on Friday, May 28, 2021. Adam Pardee / Review

The Half Moon Bay High girls basketball team capped off an unusual season with the traditional Senior Night celebrations on Friday.

After the photos and festivities were over, the Cougars got down to business, securing a 64-51 victory against Woodside High School.

Both teams came out strong in the first quarter but Woodside controlled the tempo, forcing Half Moon Bay into quick shots and turnovers. Heading into the second, it looked like it could be anyone's game.

“If you can get three or four passes, you’re going to get a good shot against (Woodside), but with them running, you get in that same mood and no one's passing,” said head coach Antonio Veloso. “We probably could have been more patient and got off better shots. But that’s something (Woodside) does well, they create that pace, and when you fall in that trap and you’re not shooting well… that’s how we were down 18-0 against them (two days earlier).”

The Cougars stepped back on the court in the second quarter, and, after some back and forth in the first few minutes, Alli Dioli found the net from beyond the arc and Abby Kennedy stretched the lead to 21-17 on back-to-back possessions, securing Half Moon Bay’s largest lead of the game. Rippberger and Abby Co capitalized on offensive drives and Half Moon Bay led 28-18 to end the first half.

Woodside didn’t come within 10 points for the rest of the night.

The Cougars maintained a healthy lead in the third.

Kennedy got the momentum going right out of the halftime break with a fast break, and Abby Co, Ally Co and

Belmonte contributed to a 8-0 run to pull the lead to 36-18 with minutes to go in the third.

“I think we did a really nice job running the floor tonight,” said Kennedy. “Just pushing on defense and creating turnovers.”

While Friday might have been the last home game for the seniors on the team, the Peninsula Athletic League decision to allow teams to participate in playoffs means their season isn’t over. The girls on the varsity basketball team wrote letters to the board and many local parents were involved in getting the decision reversed.

“There are just a lot of people who are advocating for us and we are really grateful for that,” said Rippberger. “We’re happy we may have another two weeks to play together.”

The league board president, Al Mack, declared the original decision denying Central Coast Section participation to winter teams null and void on May 19 due to violations of the Brown Act governing public meetings.

“I think it’s a great decision and I think it’s the right decision as well,” said Veloso. “And not because of anything else other than that we should all be able to decide, meaning districts will decide what they want to do.”

The Cougars will be competing in their ninth consecutive CCS playoffs starting this weekend. Schedules have yet to be announced.

The HMBHS Lady Cougars take on the Harker Eagles in the CCS Division 4 Semifinal game tonight at 7pm @HMBHS.