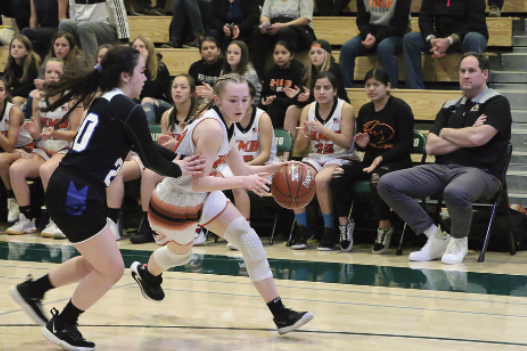 Martin Dioli sits at the end of the bench during Half Moon Bay High School girls varsity games, but his daughters are a big part of the Cougar success. And in his day, he was a star. Photography4Good/John Ediger 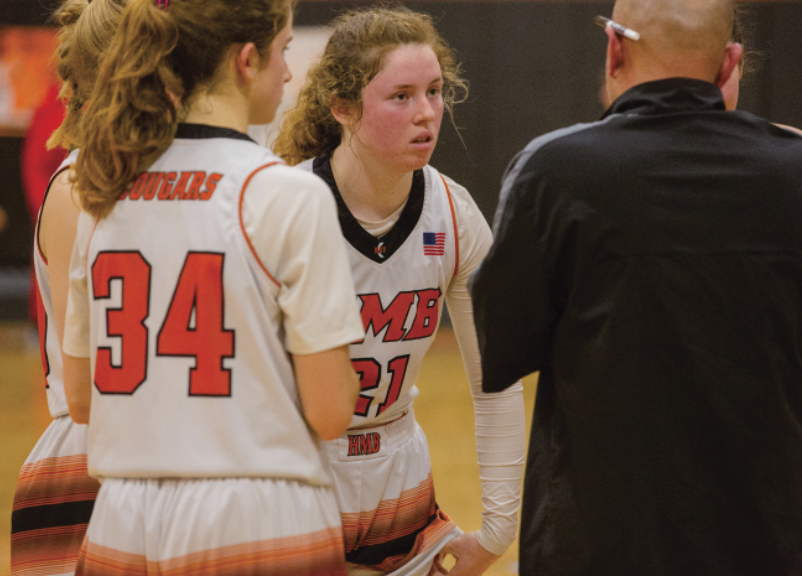 Alli, left, and Bella, center were the Diolis starring on the hardwood this year. Kent Hwang / Review 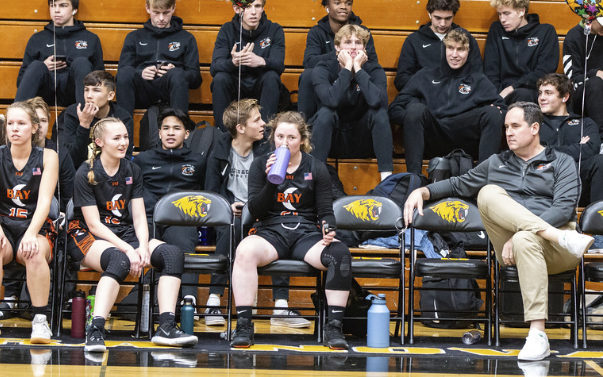 This is a basketball love story. No one dies in a tragic helicopter crash. Scary viral infections can’t stop it. This is the story of one Coastside family for whom March Madness continues no matter what.

It begins more than 40 years ago, when Martin Dioli was a youngster at Our Lady of Mercy Catholic School in Daly City. He’s the one who is always outgrowing his clothes. The story continues through high school, where Dioli starred on the hardwood for the St. Ignatius Wildcats, and onto a memorable career at Gonzaga, now one of the top college basketball programs in the country. In fact, if the NCAA national championships hadn’t been halted by coronavirus concerns, the Zags would be a top seed in the tournament that was to begin this week.

But the best part of the story takes place right here on the coast, where Dioli’s personal 3-pointer comes in the form of daughters Katherine, Bella and Alli.

“I was always tall for my age,” says Dioli, now a 6-foot-8, 51-year-old attorney and coach of the Half Moon Bay High School girls junior varsity basketball team.

That’s why the father of one of his friends goaded him into playing for the first time. Dioli and basketball turned out to be a perfect match. “I played different sports, soccer and other things,” he recalls. “But I really loved basketball.”

It was as if he were born into a basketball team. Two twin brothers a year younger are well over 6 feet tall. Another younger brother is 6-foot-6, and his sister is 6-2. “Mom is 6 feet tall and she’s the shortest in the family,” Dioli says.

While his height gave him a natural advantage, it took a while for Dioli’s game to gel. As a high school freshman, he was relegated to the B team. Then it was on to the JV squad before making varsity. The Wildcats were good, playing in the state championships in his sophomore year. By his senior season, colleges were calling. Several schools in what is now the West Coast Conference recruited the strong student-athlete, as did Ivies like Brown and Penn.

Dioli was charmed by Gonzaga in Spokane, Wash. A cousin recommended the school and the team seemed great. “I liked the guys,” he explained. It might not have hurt that head coach Dan Fitzgerald was also a St. Ignatius graduate.

“I was a specialist and came off the bench,” Dioli recalls.

He remembers one game against Pepperdine, when he was called for traveling twice in quick succession. Thirty years later, he swears he maintained a pivot foot.

“Anyway, I got screamed at at halftime and I was in the doghouse,” Dioli said.

Then there was the incident at the Cowboy Shootout, a Christmastime tournament in bone-cold Laramie, Wyo. Dioli was wiling away the evening in a hotel room along with teammates Brian Fredrickson and Paul Verret, who was laid up with a stress fracture in his leg. The trio ordered a pizza.

“Verret is sitting by the pizza and there is one piece left,” Dioli remembers. “Brian and I both decided to go for it. I think I picked Brian up and kind of dropped him on Verret.”

Verret screamed in pain, and the rough-housing turned a stress fracture into a clean break. Suffice to say coaches who depend on the working bodies of young athletes were not amused. Dioli maintains it all worked out in the end because the broken bone healed more quickly than the lingering stress fracture.

Then came the fateful day in his fourth year at Gonzaga — in his third year of eligibility — when Dioli was home sick and missing practice. Fitzgerald sent an assistant coach just to make sure Dioli was really sick and not malingering. Dioli didn’t like it, so he quit the team.

By then he had graduated anyway. He was planning a legal career and preparing for the law school entrance exam. In the meantime, the burly Dioli found work as a bouncer and bartender at a campus bar called Outback Jack’s.

One fine day in the spring of 1990, a pair of assistant coaches — Dan Monson and Mark Few, who would go on to become the now-legendary head coach of the Bulldogs — showed up at the bar. They wanted the big guy back on the team.

“They said, ‘Fitz is out and you have a year of eligibility remaining,” Dioli said. “I thought they were kidding. I said, ‘Do you guys want a beer?’”

But the seed was planted. He felt bad about the way his college basketball career ended. He decided to put on the Gonzaga uniform for another season, but first he would have to get enrolled in the college. He took the GMAT and got in to the MBA program. Because that wasn’t enough for a man who had always been an academic overachiever, he decided to take the five-part test to become a certified public accountant. And Dioli was still thinking about law school.

Dioli has fond memories of his last season on the hardwood. When pressed, he says, sure, he might have played professionally overseas. Instead, he went to the University of California, Hastings College of Law.

His basketball coaching career started when his oldest daughter was in the third grade. Some of the dads formed a Catholic Youth Organization team for Katherine and her friends. Little did he know he was signing up for years more in the gym.

“I didn’t even know if my girls would be interested in sports,” he says.

By Katherine’s seventh-grade year, Half Moon Bay High School had a new coach who also went to St. Ignatius. Antonio Veloso eventually asked Dioli to coach the JV team at the high school and to help out with the varsity team when he could.

In due time, Katherine graduated. This season daughter Alli began her freshman campaign even as her sister Bella was preparing to graduate. The Dioli duo starred on a Central Coast Section-winning team that finished the season last week at 25-4 and a perfect 11-0 at home.

But Martin Dioli is the real winner in this story. He’s an undefeated 3-0. He says the game brought him closer to his teenage daughters, and that they even wanted him around through high school years that can be tough on dads and their daughters.

“I worried I would be there too much, but they want me there,” he said. “I’ve gotten to see all of their games.”

Today, Katherine is studying international relations with an eye toward finance. Bella, he said, wants to be a nurse. But Alli, who was honored as the Peninsula Athletic League MVP as a freshman, may be the real baller of the whole bunch.

“She wants to play in the WNBA someday,” her proud father says. It’s a lofty goal, but he says she is doing everything right. She gets straight A’s at Half Moon Bay High School and plays basketball relentlessly. On March 6, the day after the Cougars lost in the state basketball tournament, she was back in the gym at 7 a.m. Dad says she shoots hundreds of shots each and every day. The next day, she practiced from 8 a.m. to noon with her West Valley club team.

Her father had the same drive, both in the classroom and the gymnasium. “I can relate to her,” he said.

There is one member of the family who might consider the decisions to suspend the NBA season and cancel the NCAA tournament a reprieve from the constant sound of a dribbling basketball. That would be Dioli’s wife.

“Sometimes it gets to be too much for Jaime,” he says.