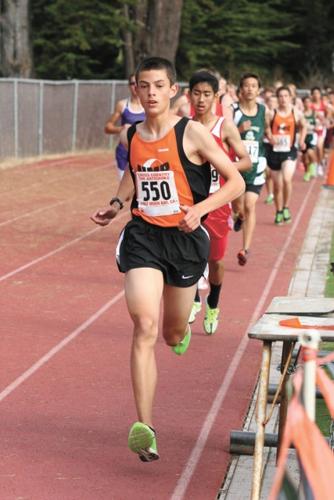 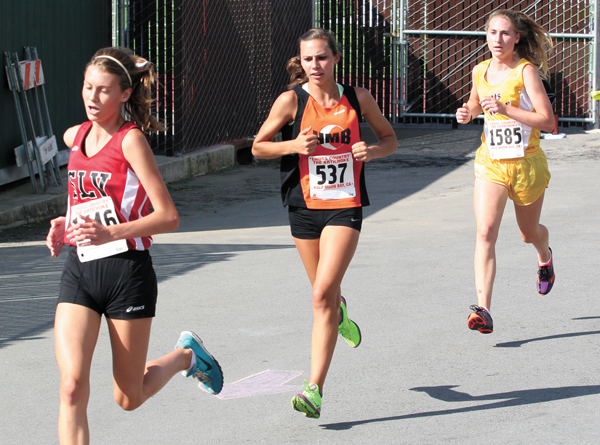 Half Moon Bay’s Chandra Anderson, center, comes off the track and heads toward Cougar Hill with San Lorenzo Valley’s Jessica Germany, left, and Scotts Valley’s Abby Utic. Anderson finished ahead of the two girls to place seventh in the varsity girls’ race at Saturday Artichoke Invitational.

Half Moon Bay’s Chandra Anderson, center, comes off the track and heads toward Cougar Hill with San Lorenzo Valley’s Jessica Germany, left, and Scotts Valley’s Abby Utic. Anderson finished ahead of the two girls to place seventh in the varsity girls’ race at Saturday Artichoke Invitational.

Put it all together and Half Moon Bay High School cross-country teams look to be in contention at both the Peninsula Athletic League Championships and Central Coast Section Championships, next month.

Four Half Moon Bay boys broke the 13-minute barrier Saturday at the Artichoke Invitational, turning in the second-best team competition of the day. Only PAL rival Carlmont was better by a minute.

Mitch Martin turned in the fourth fastest time of the day for all boy runners, running the 2.33-mile course in 12 minutes, 12 seconds. He ran in Saturday afternoon's Large School Division, finishing second. He couldn't run with his teammates in the morning as he was taking his SAT exam.

"Second place is pretty good I suppose," Martin said. "I can't complain about that, especially after taking the SAT this morning."

Logan Marshall won the frosh-soph race in 12:22, outkicking Jacob Hicks of San Lorenzo Valley. Marshall's time was seventh-fastest among the 889 boys that ran.

Meanwhile, Half Moon Bay's girls finished eighth of the 46 teams that ran. Chandra Anderson was Half Moon Bay's top runner, finishing 12th in 14:54 among the 573 runners.

"It was definitely weird that I was the only one running," Anderson said. "I like it lot better to run with your team."

Half Moon Bay's Natalie Strohm and Paige Williamson were out with injuries.

"It's hard running without your entire team, but it's something we have to do and work from it rather then let it set us back," said Jasmine Shaff.

The sophomore finished fourth in the frosh-soph girls' race in 15:28, 28th overall.

The best news of the day was that nearly everyone who ran on the Half Moon Bay team set a personal best.

Anderson was the happiest with her showing. It was much different from a week earlier when she was Half Moon Bay's second finishing runner at the Stanford Invitational.

"Last week was a really bad week for me and I wasn't feeling good," Anderson said. "Today I just wanted to pick it up and not have one of those meets again."

Half Moon Bay is off until Oct. 11, when it participates at the second Peninsula Athletic League meet, taking place at Crystal Springs. The Cougars run on Oct. 15 at the Monterey Bay Invitational.

"It's nice to get a break and give us time to recover," said Maddie Hagarty.

The freshman was second for the girls' frosh-soph team, 15th overall in the race and 83rd of all girl runners in 16:38. Half Moon Bay finished eighth as a team in that division.

Kylie Freeburg was happy after her race Saturday.

For more images from this year's Artichoke Invitiational, click here!

We love rivalries: Ford vs. Ferrari, Ali vs. Frazier, Cal vs. Stanford. Friday’s showdown be…

In only their second contest since seven girls tested positive for COVID-19, the Half Moon B…

Smith Field, the popular recreation area at the end of Wavecrest Road, is in the early stage…