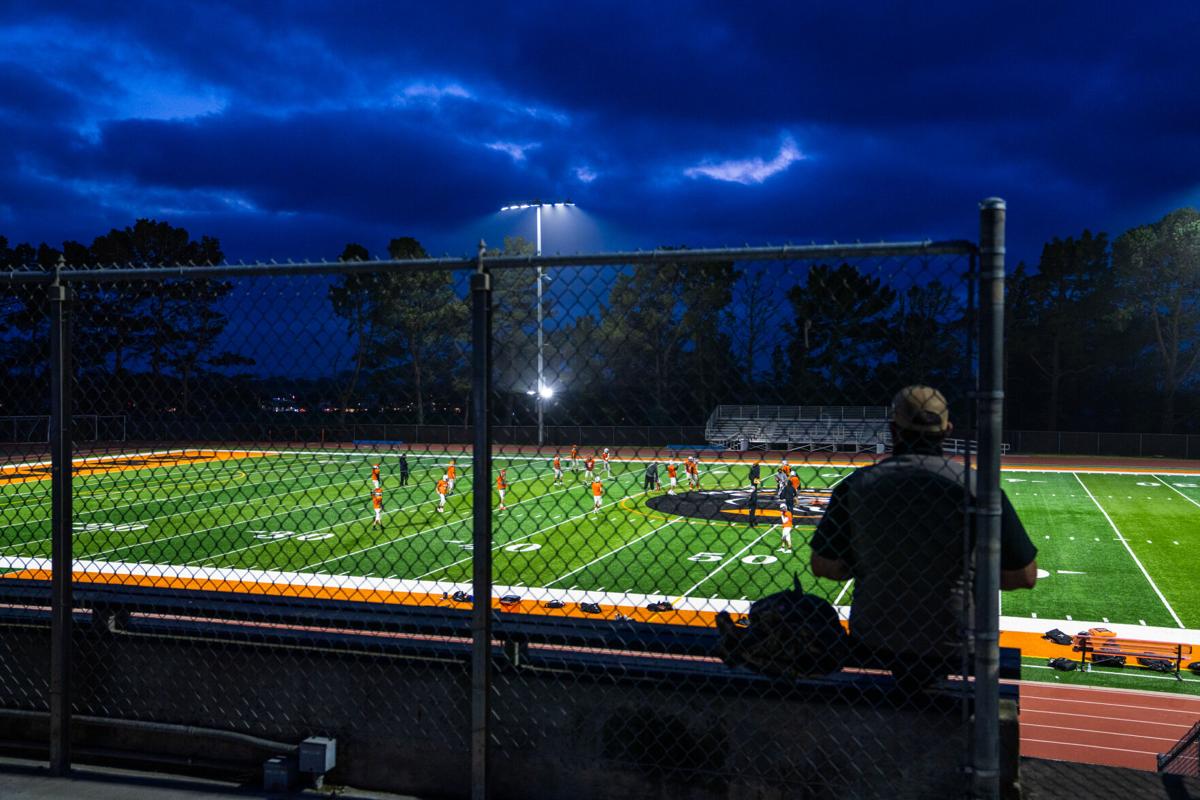 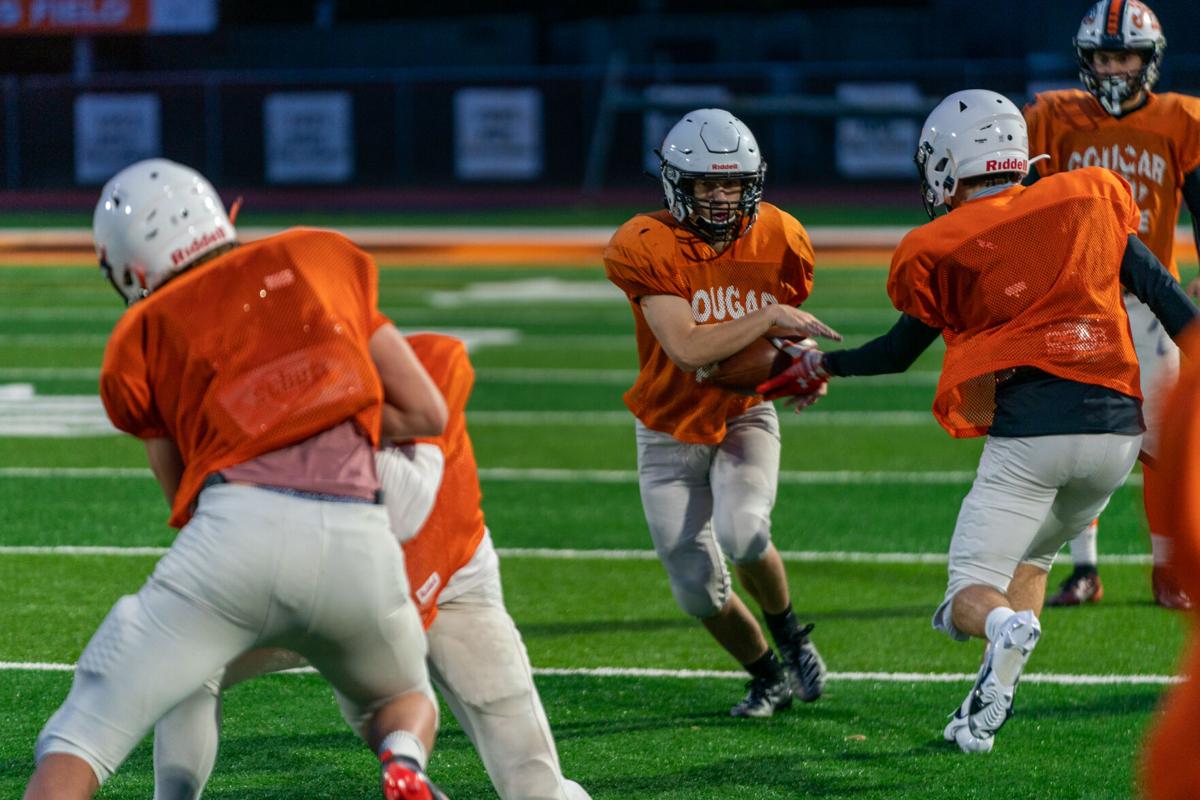 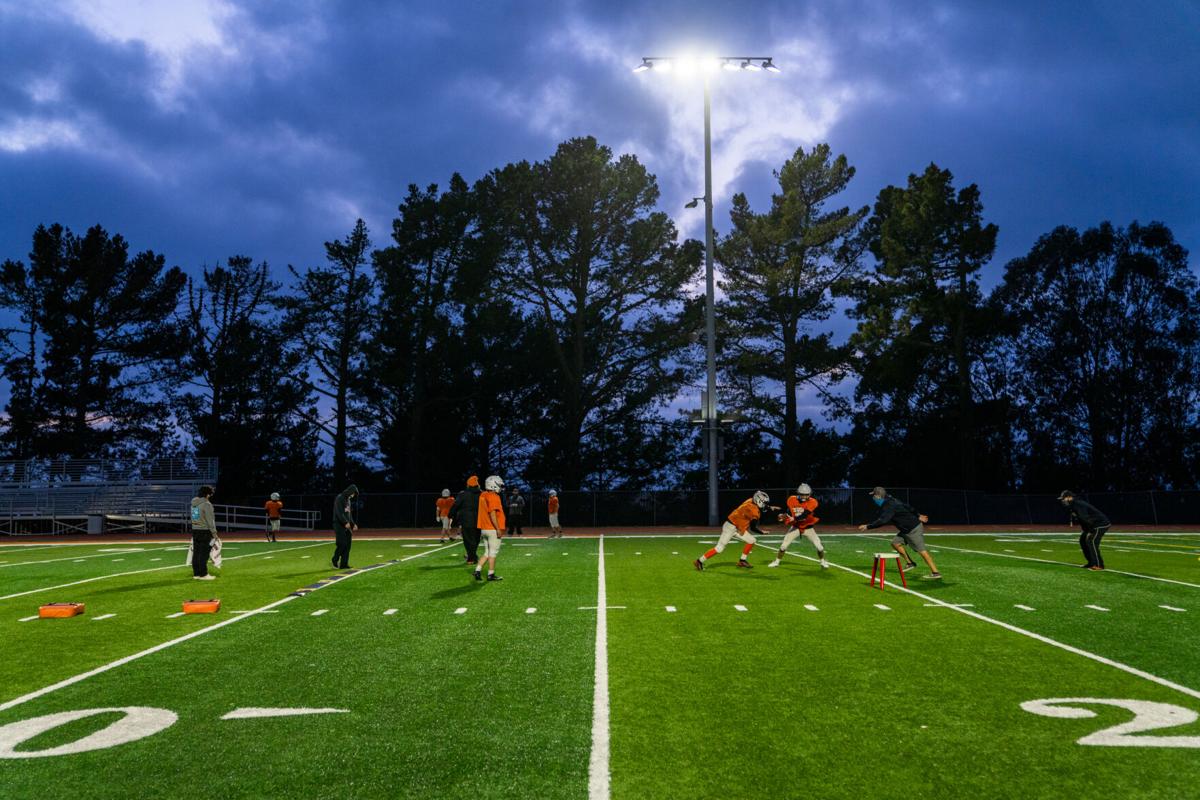 In so many ways, it was a practice like any other for Half Moon Bay High School’s varsity football team. A chilly night under the lights at their high school field in preparation for Friday night’s matchup.

But, like seemingly everything else the past year, it had a different feel. On March 3, the Cougars, now in their third week of full-contact practice, held their first session under the lights since November 2019. Watching the team take snaps, kick off and run drills, head coach Keith Holden got a feeling he hadn’t had in some time.

“To come out here now that we’re actually practicing in pads with games coming up, it feels normal, which I haven’t felt in a while,” he said.

Athletic Director Brendan Roth, who has had a big role in keeping the school’s athletics going during a turbulent year, watched the practice from atop the bleachers.

“I know that they’ll be pumped when they hear that first whistle of the first game,” Roth said. “That will be special.”

But down on the field, the players and coaches were already excited just knowing they had games on the horizon.

“It feels great. Having the field to ourselves at night, it feels like a game,” junior quarterback William Moffitt said. “We’re all pumped up and tonight was our best practice of the year so far.”

Last week, the Cougars beat San Mateo High School, 14-7, in a scrimmage to kick off the season. The team will play five regular season games, starting with a home game against Burlingame at 7 p.m. on Friday. But getting to this point was hard for players. As the pandemic worsened over the winter months and the California Department of Public Health and the California Interscholastic Federation changed guidelines and dates, many members of the team wondered if they would ever set foot on the field. When the news came down on Feb. 19 that the state would allow more outdoor sports with restrictions, it jolted the players and coaches.

“I was so pumped,” said running back and linebacker Tristan Hofmann. “I was relieved to know we were actually having it, because it’s been so long. There was no answer and it was pretty frustrating. I’m really excited for this year.”

“There’s been a lot to adjust to this year, and our kids have done an amazing job,” Roth said.

With 350 student-athletes active at the high school, it has taken a lot of behind-the-scenes work for Roth and athletic trainer Taylor Leidheisl to get to this point. Now, their jobs require more daily coordination, not just within the high school, but with other districts and teams. In addition to reviewing safety protocols and keeping teams updated, Roth’s position has become multifaceted. He even painted six-foot markers on the Cougars’ bleachers in the shape of the mascot’s paw to indicate required physical distancing.

There won’t be the usual crowds at upcoming games. Players can list two people per household to attend home games. Face coverings and social distancing will be required. The Cougars’ junior varsity football team will now play home games on Thursday nights, instead of Friday. This break in longstanding tradition is to make sure there is no overcrowding before the varsity team’s Friday games. Because of the limited attendance, the high school will livestream games. Pat Olson, the team’s play-by-play announcer, will lead the broadcasting efforts.

San Mateo County is currently below the state’s threshold requirement for weekly testing of football and water polo players. The CDPH said players and coaches would need to be tested if the adjusted case rate is more than 7 per 100,000. The county’s case rate is currently about four. But the team is still testing weekly in order to comply with other school districts. If other districts require testing data, Roth and Leidheisl want to work with them to provide all available testing data.

“We’re going to find common ground so we can get these games played,” Leidheisl said.

Roth said football players are getting tested at the Ted Adcock Community Center, but the school will eventually transition to a state-funded program. The California Interscholastic Federation canceled Season 1 playoffs, so the Cougars won’t be in a Central Coast Section title hunt like they were the last time they took the field. But the team still has goals to win and compete as much as they can.

“I don’t care if we have two or three games,” Moffitt said. “I just want to be on the field.”

- Cougars football opponents include Menlo-Atherton, Woodside and Terra Nova. Spectators are highly restricted this season. To watch Cougars games remotely, follow @HMBHSAthletics on Twitter to receive an access code to stream through the National Federation of State High School Associations. Replays will be free to stream 48 hours after the game.

- Not every youth sports league is up and running statewide. Athletics at Cunha Intermediate School, which are run by the Boys and Girls Club of the Coastside, compete in the Art David Athletic League. The league consists of 13 Peninsula schools from San Mateo, Belmont and Palo Alto school districts.

- The league opted not to host any athletic competitions for the 2020-2021 school year. To compensate, the BGCC is hosting socially distanced conditioning for basketball, tennis, volleyball and soccer for middle school student-athletes.