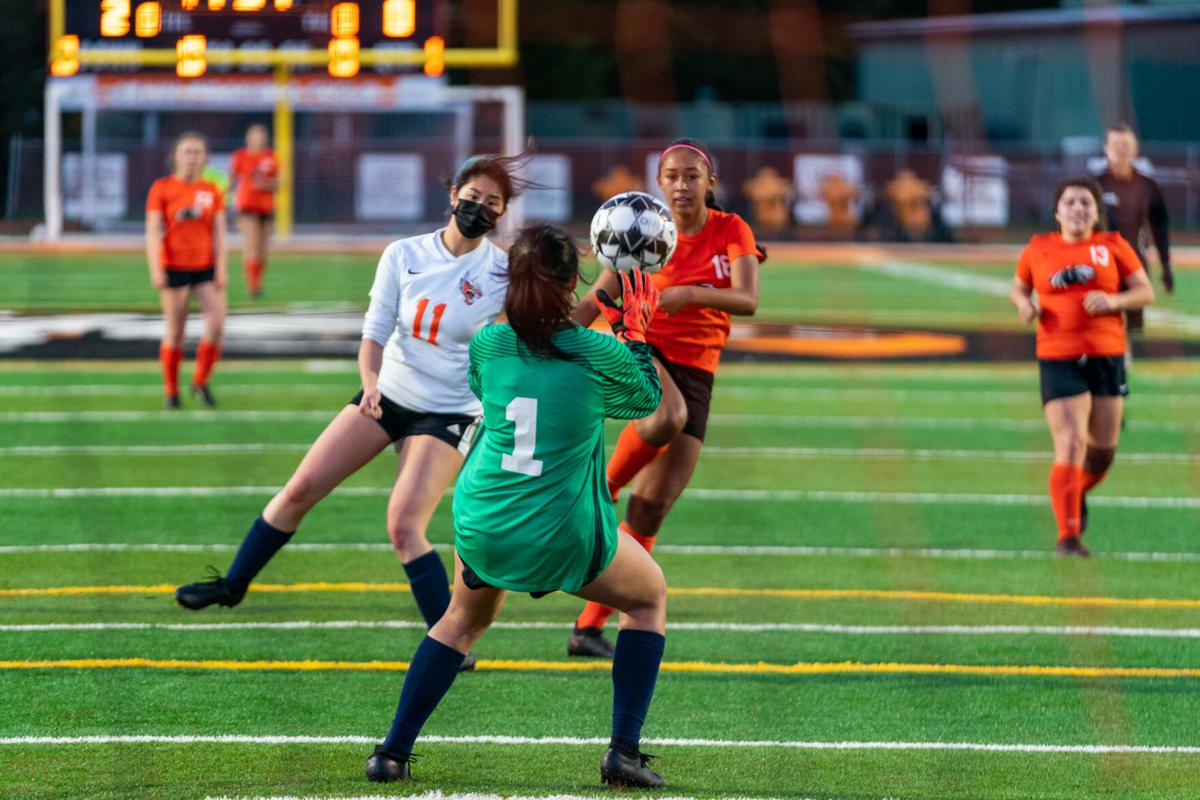 Deja Spikes watches the ball go through the hands of the Design Tech goalie to score her second goal of the match against Design Tech High School at Half Moon Bay High School. Adam Pardee / Review 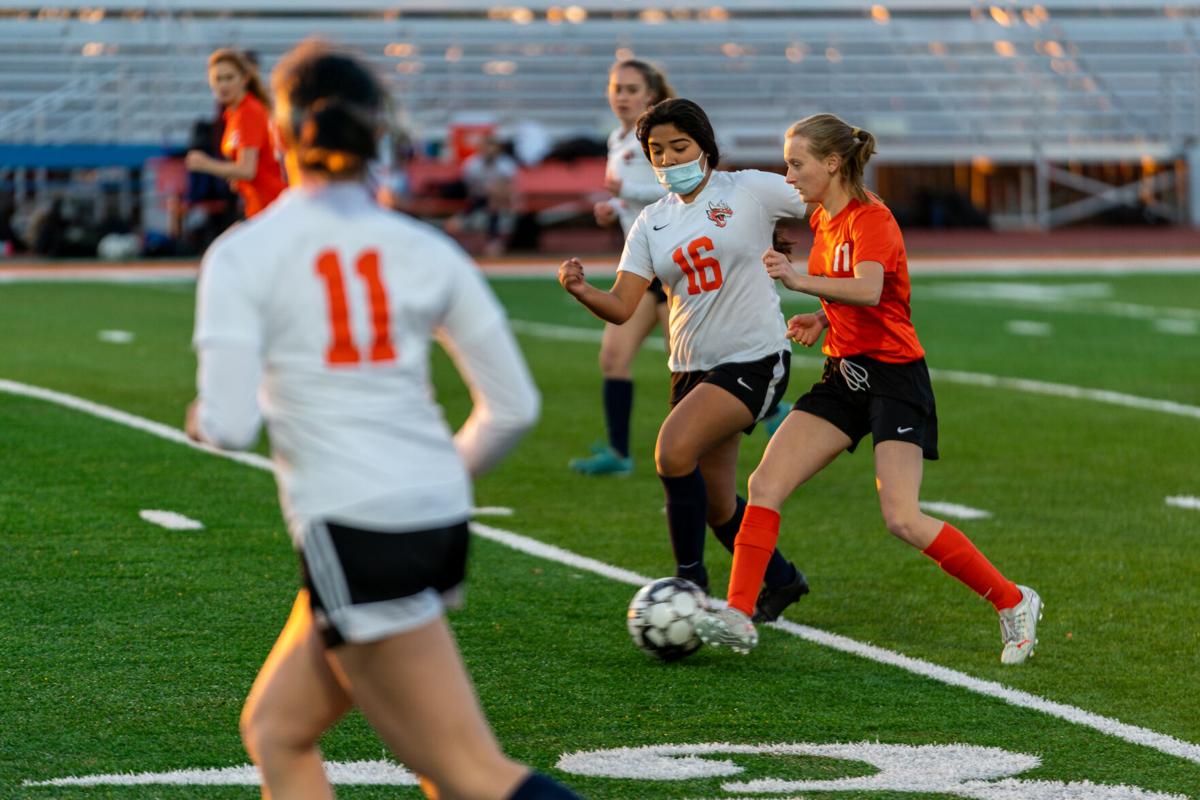 Deia Kerseg dribbles past the defense of Design Tech High School during their match at Half Moon Bay High School. Adam Pardee / Review 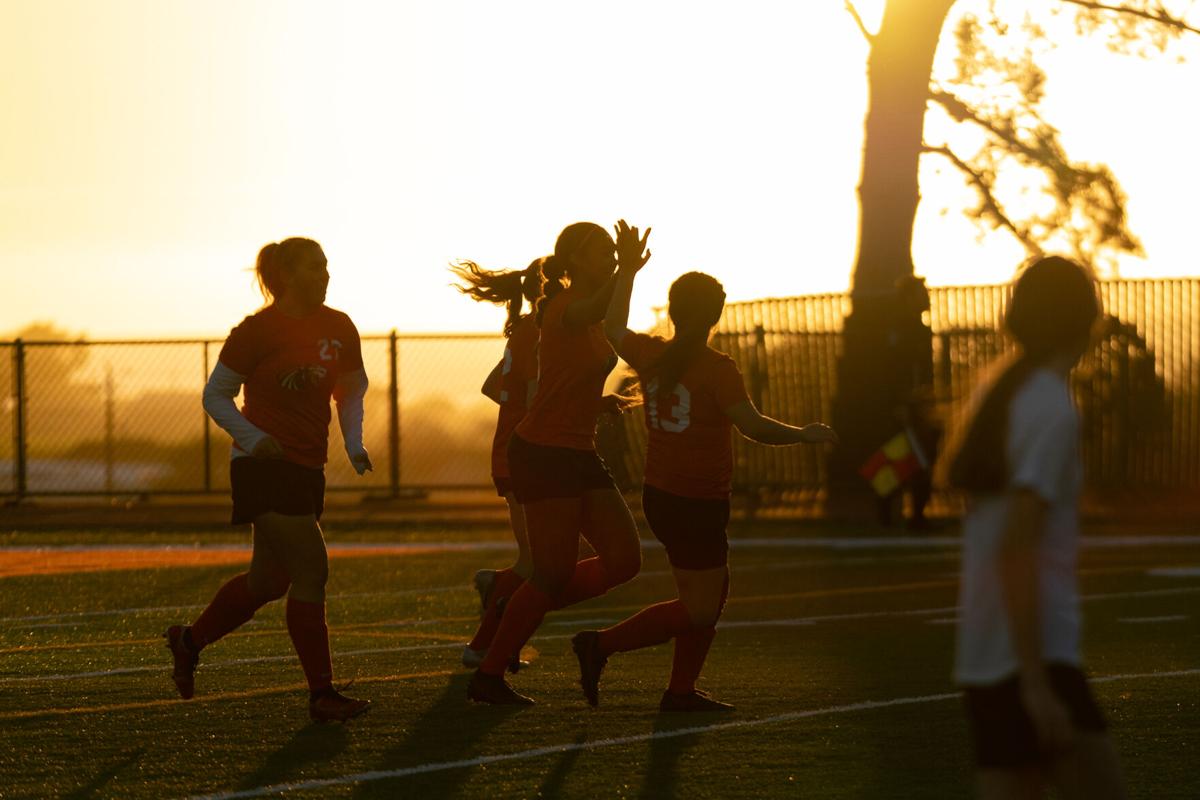 Deja Spikes celebrates with her teammates after scoring a goal during their their match against Design Tech High School at Half Moon Bay High School. Adam Pardee / Review

Deja Spikes was unstoppable on Thursday night in the Half Moon Bay High School girls varsity soccer team's 7-2 victory over Design Tech High School. The forward led the Cougars offense with five of the team's goals.

“Deja had a night,” said Cougars head coach Sonny Day. “She just put it on them; it was awesome. What starts from that is the players gain confidence playing with each other, which is nice leading into the (holiday) break.”

Spikes found the back of the net within the first two minutes of the match, and again halfway through the first half, and yet again with just under 20 minutes to go in the half. She fell and was hurt early in the match, but bounced back.

“I was just excited to score,” said Spikes. “A lot of the goals were team goals. We worked as a team to score.”

The Dragons got a few good shots off in the first half, but Cougar goalkeeper Kira Biondi protected the cage, only letting in one goal in the first half. Spikes battled through the opposing defense to put the Cougars up 3-1 heading into the second half.

Biondi is a senior, and this is her first year at Half Moon Bay High School.

“(Biondi) has really stepped up,” said Day. “We’re really lucky to have her.”

Spikes stole the show on the opposing side of the field, but the Cougars also owe their first-half success to the defenders. The defense revolved around a strong performance from Sydney Fingerhut.

“Sydney is the rock of the team,” said Day. “She provides that real strength of shape and the whole team kind of feeds off of her.”

“I think we did really well with passing,” said Spikes. “We were working really hard, and I think we played a good match.”

After coming in first in the Peninsula Athletic League last year, the Cougars are the team to beat this season.

“I think the biggest thing for us is just comfortability with each other,” said Day. “We have some freshmen and sophomores who didn’t play last year because of COVID-19, so they are still getting comfortable with each other, getting their timing right.”

Half Moon Bay is 2-2 so far in the preseason. It’s Cougars vs. Cougars on Thursday, in a non-conference matchup versus San Lorenzo Valley High School.

“I just hope, no matter if we win or lose this season, that we play as a team and win and lose as a team,” said Spikes.

Through rain, an ill-timed fire alarm and a broken scoreboard, the Half Moon Bay Cougars fou…

The Cabrillo Education Foundation is hosting its third annual cornhole tournament from 10 a.…

Volleyball round-up for week of September 15, 2021