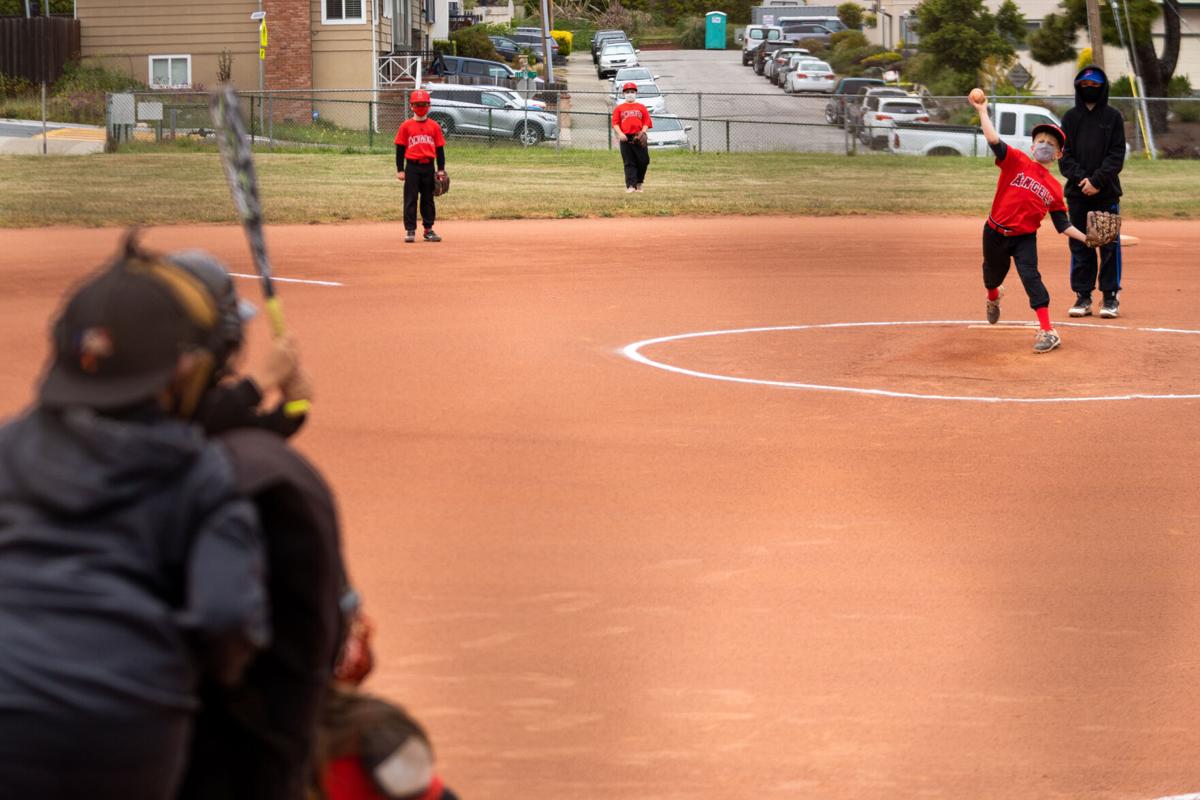 The Angels play the Marlins during the second inning of a Pacifica America Little League game at Ortega Middle School in Pacifica. Adam Pardee / Coastside Magazine 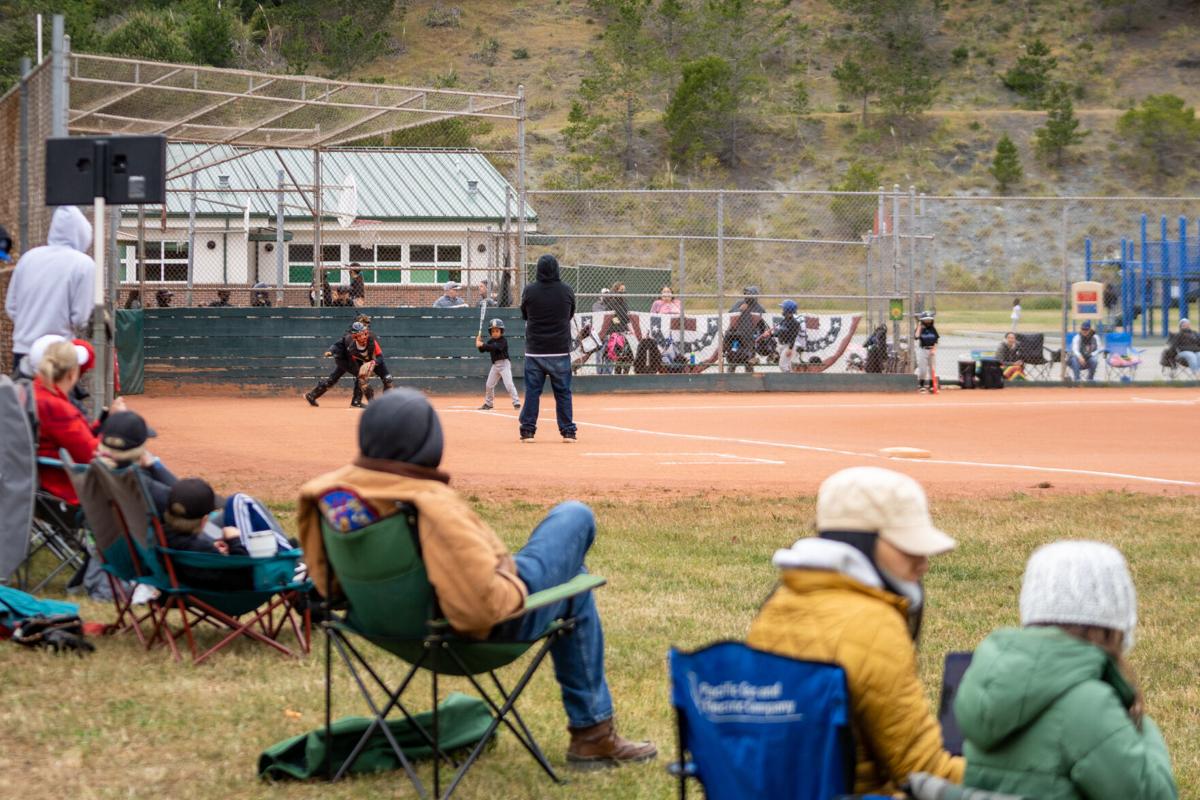 Parents of the children playing for the Angels and the Marlins of the Pacifica American Little League watch from the sidelines at Ortega Middle School in Pacifica. Adam Pardee / Coastside Magazine

It was 2008 when Dimitri Fabiani-Wyatt first geared up and took to the field for the Pacifica Tigersharks Pop Warner football team. He was just 5 years old. “Back then, every team was filled and sometimes we had multiple teams for each age group,” Fabiani-Wyatt recalled.

Soon after, participation started to drop.

“By the time I realized that what I was a part of was really special, I started to see that we weren’t as big as we used to be,” said Fabiani-Wyatt.

His eighth-grade football season with the Tigersharks was canceled due to a lack of players. This year, the Pop Warner program has folded altogether.

It’s not just football. Similar trends have been occurring in local baseball and hockey leagues. Joel Farbstein, who ran the North Coast Hockey League for 10 years, reports a 30 percent decrease in participation between 2020 and 2021. Half Moon Bay Little League has experienced a similar drop.

Diminishing numbers were intensified by COVID.

“We had flyers going in every kid’s backpack in English and Spanish, but COVID has presented a huge challenge with less kids being in school,” said Farbstein.

During the pandemic, there has been less athletic activity in all forms. Stay-at-home orders have led kids to hunker down on couches. Practices stopped, gyms shut down, school teams postponed or canceled seasons.

According to a study conducted by the Aspen Institute called “Project Play,” the average child spent about 6.5 hours less per week on sports during COVID-19. Time clocked at practice declined by 54 percent and hours spent at games were down 59 percent.

“The pandemic was a moment for everyone to stop and think, ‘Do we really want to be doing this?’” said Brian Colluci, a father of three whose children have played in various Coastside youth leagues. Colluci is also a former board member for Half Moon Bay Little League and current board member for the Half Moon Bay Pirates travel team.

“We are caught in a tenuous moment and everything in the Bay Area is only getting more expensive. Spending time and money on sports may not be people’s priority,” he said.

Lower rates of participation preceded the pandemic. Nationwide, participation in youth sports fell among kids ages 6 through 17 by roughly 7 percent from 2012 to 2018, according to “Project Play.”

Reasons given for this decline are as numerous as they are diverse.

According to an ESPN poll, nearly 9 of 10 parents have concerns about the risk of their child being injured playing a sport. A study conducted by the Hospital for Special Surgery revealed that concussions ranked as the No. 1 injury concern for all parents, especially in football.

“Even my parents, who let me play since I was 5, have thought twice about putting me in the program again,” said Fabiani-Wyatt. “The reality is, I have gained more from football than any injury from the sport has ever taken from me.”

Throughout the time that the Tigersharks program was running, efforts were made to reduce the potential for injury among players.

“Our league made changes in the way we taught the game. Football has never been safer,” said Dave Mercurio, who was involved with the Pacifica Tigersharks for over 25 years.

“We learned to teach kids heads-up tackling, which kept their heads out of it. We eliminated kickoffs, which were dangerous because you had players running downfield from 50 yards apart and crashing into each other, and we even had helmet sensors that would blink if a kid hit their head too hard so we could take them out and test them for a concussion.”

Specializing in a single sport too early often leads to higher injury rates. In an area like the Coastside where the population of children is declining, specialization also prevents different sports from fielding more players.

“I think the pressure comes from parents who want their kids to excel at a sport, more than anyone else,” said Colluci. “The leagues used to be pretty good at staggering their seasons, but at some point that stopped.”

Sports have become more serious at an earlier age. Pressure to perform, from parents and coaches, can make for a toxic environment.

“What I see happening today is parents fighting in the stands, coaches being ejected, and people in it for the wrong reasons,” said Mercurio.

Though there is no shortage of open space along the Coastside, the number of recreational facilities in the area are few.

“A lot of people want the only active recreation in the area to be hiking, and recreational park land is scarce,” Farbstein noted. “The city has done a disservice to youth in that there are not enough active recreational opportunities here. There is no pool, but the football field has been redone twice and the track widened. When you have facilities, people use them.”

Organizers hope the decline in youth sports will reverse as pandemic restrictions are lifted. However, the sudden financial downturn from coronavirus could have a long-term impact on opportunities for kids to be involved in sports. Both the North Coast Hockey League and the Half Moon Bay Little League have tried to minimize the potential financial burden. The NCHL offers scholarships with free or reduced fees and the Little League offers financial aid.

Despite omnipresent barriers to success, many players persist out of sheer love for their sport.

After DiMitri Fabiani-Wyatt’s eighth-grade Pop Warner season was canceled, he was a member of the last freshman football team that Terra Nova High School had the numbers to field. Though he has witnessed the decline of youth sports firsthand, his love for the game of football has not faltered.

He will try to walk on to the football team at Colorado State University next year.

This one is going to require input from parents of sports age children.

(1) Is it becoming more difficult to schedule all of the tasks you have to complete each day...much less pick up and drop off children to their preferred after school activity? Imagine having several children. Think about the necessity of two income households.

(2) Would you allow your child to ride their bike a few miles on Highway 1 to get from home to the sport facilities? Do you allow them to ride to school?

(3) Is potential injury a barrier to you allowing your child to participate?

(4) Is homework reducing the amount of free time your child has to participate in after school activities?

(5) Are participation costs and fees beyond your family budget? Again, imagine several children in one family.

This is much more about Covid and the hoop jumping that was required to get leagues going in California. I'm incredibly thankful to those volunteers - parents with full time jobs - who spent countless hours dealing with the health authorities. Many other jurisdictions (thinking about NJ, for example) which never "shut down" kids outdoor youth sports.

Specializing is an issue for sure. Pressure exists to pick a path at a young age and play that same sport throughout the year.

Maybe related to the general decline in the numbers who even care about sports?

Maybe instead of pouring tax money into parks not used by kids (carter park), we should be improving facilities for sports to be played. If the facilities are there the kids will play! Why doesn’t the city of HMB maintain ALL of Smith Field including infields instead of only the grass outfields? Does anyone even realized the “city” ball fields are maintained by parents/volunteers? The kids do fundraisers to maintain city owned fields! Have you ever seen Foster City’s beautiful baseball fields and the amount of kids that play there? There were a lot of great recommendations by the third party master parks plan. Are any plans moving forward besides a theater in Carter Park? Is a theater for kids to play sports? Has the members of the City Council visited ALL the city parks themselves? A previous mayor admitted to never being to Smith Field before. It’s hard to improve what you don’t know exists…

Cougars back on hardwood in first victory