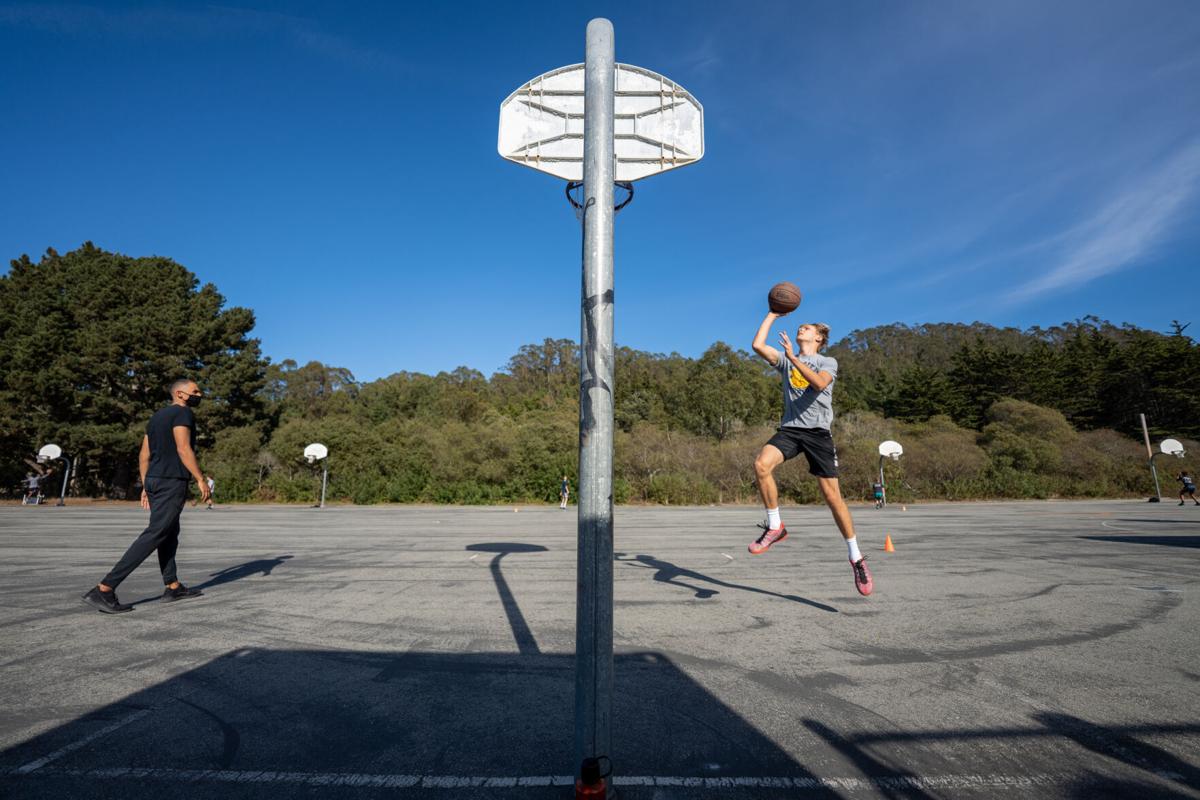 Half Moon Bay High School Boys Varsity basketball players all play on their own court to stay socially distanced during practice on Monday, Oct. 13, 2020. Adam Pardee 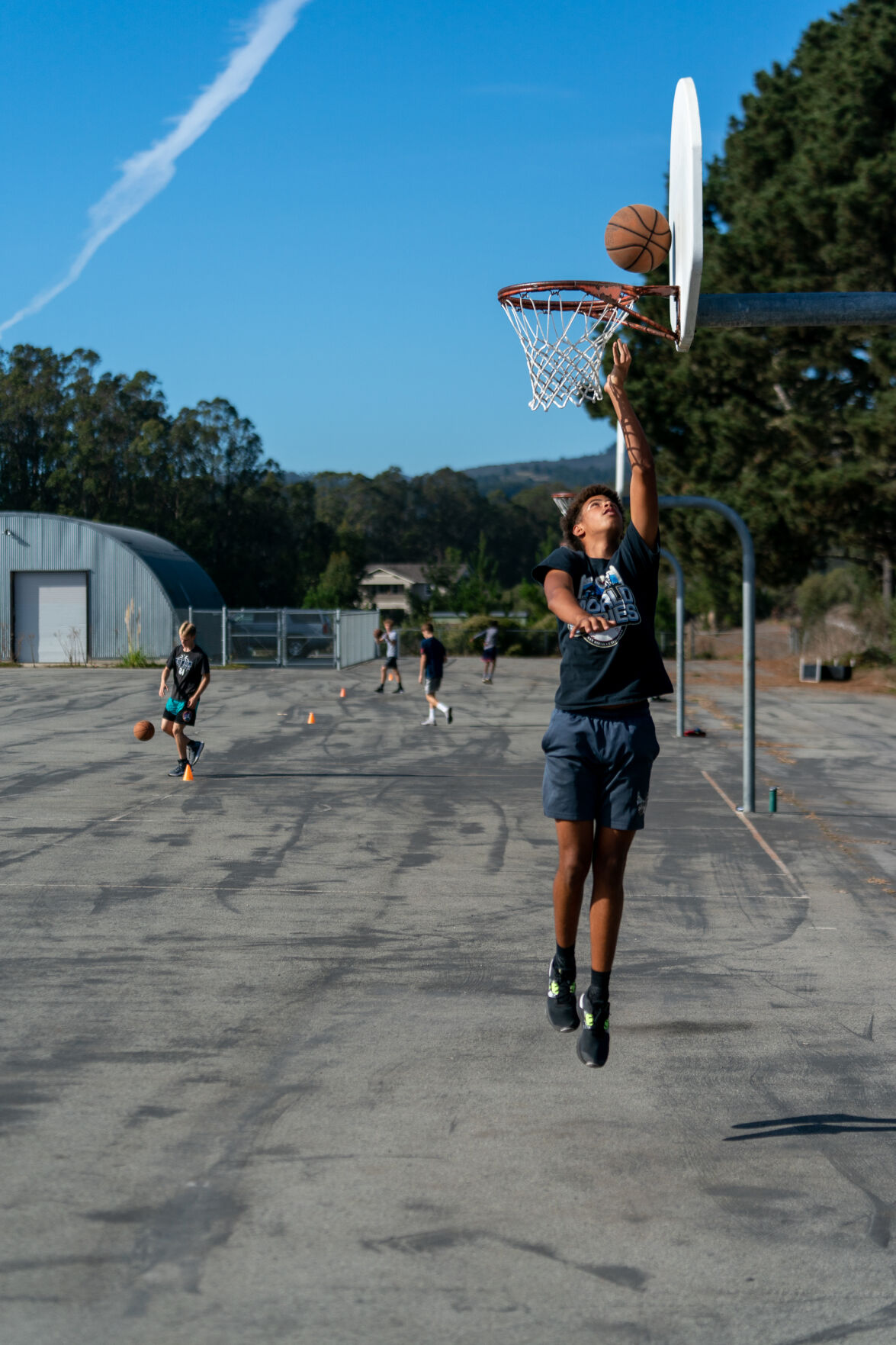 Half Moon Bay High School Boys Varsity basketball players all play on their own court to stay socially distanced during practice on Monday, Oct. 13, 2020. Adam Pardee

Mykola Ediger darted left, slashed right, then sank his reverse layup. Half Moon Bay High School boys varsity basketball team head coach John Parsons watched him from the baseline, then switched his attention to the nine other players scattered throughout the courts.

Each team member present on a sunny Monday afternoon at Half Moon Bay High School was spaced out with his own basket, meaning all 10 outdoor courts were filled. This has been the scene on the courts three days per week at the high school since late July.

In a typical season, this would be the time when the school’s boys and girls basketball teams would lace up their shoes indoors with the Peninsula Athletic League season on the horizon. Now, however, because of the pandemic and social distancing protocols, the teams are using this time to undergo a whole different kind of offseason conditioning.

On the high school’s basketball courts, the regulations in place to prevent the spread of the coronavirus mean those student-athletes participating in voluntary offseason workouts are spaced out “one-to-one,” meaning one person is assigned to one basketball hoop for the duration of the hour-long session.

“More than anything, I think it’s for their mental clarity,” Parsons said, “(after) being away from their friends and sport they love. As you can see, it’s not normal, it’s one kid per basket. There’s not a lot of stuff you can do, but they’re happy to see each other again.”

Ediger echoed that sentiment, adding that the drills come with their ups and downs. They allow a player to home in on one activity, but for a player used to the physical interaction that basketball demands, the limitations are obvious.

“There’s only so much you can do without playing against other people,” Ediger said. “Playing as a team is much different than this skill stuff we’re doing right now.”

The boys program is composed of three high school and three middle school groups meeting at alternating times throughout the week, with a maximum of 10 players per group. The varsity girls basketball team ran a similar setup from mid-September until two weeks ago. Head coach Antonio Veloso is hoping that in the coming weeks, the team will be able to practice in the Cabrillo Unified School District Events Center. With San Mateo County labeled “red tier” under the state’s reopening policy, he hopes some members of the team will be allowed to play since they would be well under the rule of 10 percent capacity.

In mid-September, a new basketball program for younger girls sprang up at the high school. On Monday, nearly a dozen third- to eighth-grade girls participated in a Basketball Pod Camp. The camps are organized by Veloso,

Cougar alum Rachel Staal and the Boys and Girls Club of the Coastside. Stall, who graduated in 2013, and several other coaches are running drills with the girls three days a week. Staal, a senior on Veloso’s first coaching class, said the new practice format takes some getting used to, both as a participant and an instructor.

“It’s weird, because most of basketball is playing as a team,” Staal said. “This is just working on skills. With these girls I’ve seen a lot of improvement because of this isolated skill training.”

With so much isolation on the court, it can be difficult for players to feel like they’re truly participating in a team-oriented sport. Coaches need to be more creative with developing drills for players to practice on their own. Veloso, ever the believer in team-bonding chemistry, said these pods can still provide a way for the younger girls to have fun.

“I think them seeing each other’s faces, you can tell it makes a big difference,” Veloso said.

All the Cougar sports teams stopped workouts for several weeks when the high school became an evacuation site for those fleeing the CZU Lightning Complex fires in August. Each team completes a set of safety protocols, which have become more commonplace for any in-person event. This includes wearing masks, health questionnaires and using new handwashing stations.

Half Moon Bay High School Athletic Director Brendan Roth recognizes that while athletics for the Coastside’s younger demographic can’t bring them together physically as before, sports are still something many people can support.

“Right now, we’re doing it safely, which is exactly what our goal was,” Roth said.

“I know our kids are definitely excited for the day they can share,” Roth said. “I think we all are.”