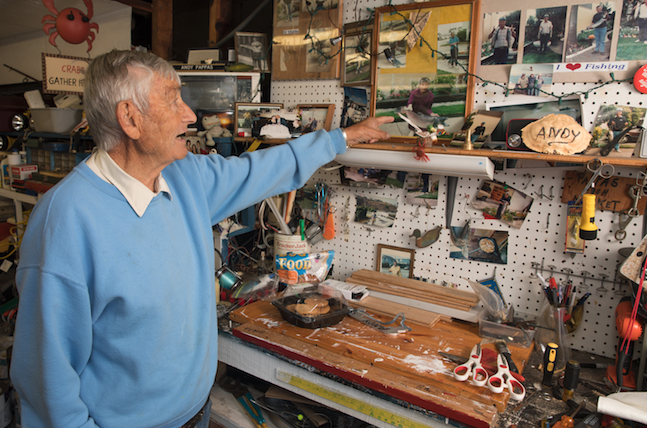 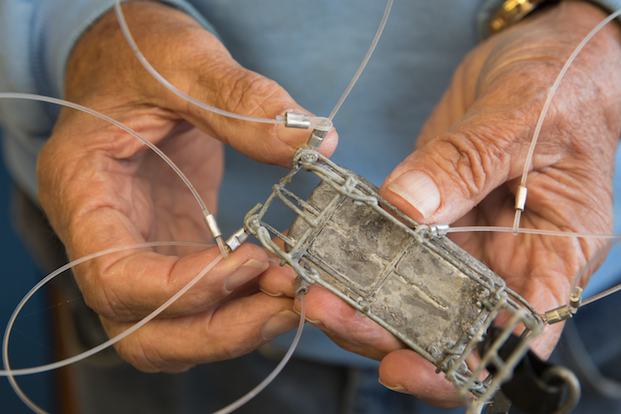 Meeting Andy Pappas, the crab king of Pacifica, is a little like meeting real royalty. That’s not just because he has been catching crab, with plenty of success, for years. It isn’t because everyone in Pacifica seems to know him or to know of him. Rather, it’s because of the warmth and excitement he exudes about Pacifica and its fishing opportunities, with his vivid stories, good-natured advice, and the way he shares his catch with friends old and new.

“When I first went crabbing a long time ago,” Pappas recalls as he gestures at the ocean from his living room window, “I used to leave early in the morning and come back at 8 or 9 o’clock in the morning, and I used to catch the limit every time. I’d be walking off the pier and the same guys who came every time would say, ‘Oh hey, it’s the crab king!’” He swats away the praise. “I don’t take it seriously, but I do like it, and that’s how I became the crab king.” Pappas commands a gorgeous view of the ocean from his home, as if he were Poseidon himself surveying the health of the ocean. His home is decorated with crab mugs and crab art, and down in his basement, photos of his ocean adventures tell the story of his life over the years.

Pappas has been crabbing for 20 or 25 years and says, “Fishing off Pacifica Pier is fantastic. I used to go at about 4 o’clock in the morning, and sometimes still do. I enjoy seeing the stars in the sky, the moon on a full moon night, and the beautiful water. It’s peaceful.” He describes how many regulars go out just to have fun. Some days they catch a lot and some days they catch nothing. He said they ask, “Andy, where are all the crabs?” Pappas laughs and says he tells them maybe the crabs will be there tomorrow. Certainly, he loves his fishing and loves his crabs, but it’s clear he loves the experience most of all.

Asked if he’s noticed a difference in crab fishing over his decades of experiences, Pappas shakes his head. “Well, last year they closed the season, but the year before that was very good and I think this year will be, too.” The 2017 sport season opened Nov. 4 and Pappas planned to be there, for a short time at least. “It’s just like Christmas Day for me because I look forward to it every year.” That smile on his face is back, the one that stretches across his face and lights up his eyes. “These days (opening Day) will be so crowded now. People come from all over for the event. And through the season, folks will even call me up to ask how the crabbing is.” Pappas is quick to share his experience, saying “come on down” or “stay home and wait for another day.” He notes that the same people come all the time, “all of us retired people and we barbecue and everybody is genial. Now that I’m getting a little older, they help me out.”

At 87, Pappas still looks forward to the opening of crabbing season, though perhaps he won’t be there at 4 a.m. His deservedly pampered cat, named Honey Girl after his beloved late wife, gets mad if he leaves too early in the morning.

He advises newcomers to walk to the end of the pier to experience the full lure of the season. Many people use nets to catch crabs but Pappas prefers the now popular snares. A surefire way to catch crab, he says, is to use a lot of bait, fresh bait, and change bait often. “One of the best places to get all of that new equipment if you’re coming for the first time,” he says, “is the New Coastside 2 Bait and Tackle Shop, which is one of the best bait shops in town.”

After so many years of crabbing, Pappas has the perfect setup to cook his catch in his home. “I cook downstairs in the garage with the portable stove because I don’t want to smell up the house upstairs.” It’s a habit Pappas has retained from his late wife, Vivian, who used to say to him, “Are you going crabbing again? That’s ridiculous! That’s just ridiculous.” He smiles as he talks about how she didn’t like crabs too much, but she did put up with him. He cooks his crabs for about 10 minutes with a little bit of salt. “Let ‘em boil, take them out, let ’em cool.” He eats his catch with local French bread and a margarita or a glass of wine. Simple and classic, just like Pappas himself. And, he says, it’s best shared with friends.

“I’m really looking forward to the season,” he says, “and to the neighbors. If I’m there, I’ll be glad to help you.” Pappas had a bench erected at the end of the pier for his late wife with both their names and when he comes out, the regulars are sure to let him have the space to, as he says, “sit out there first thing in the morning and say a few things, good things.” And then it’s time to fish.