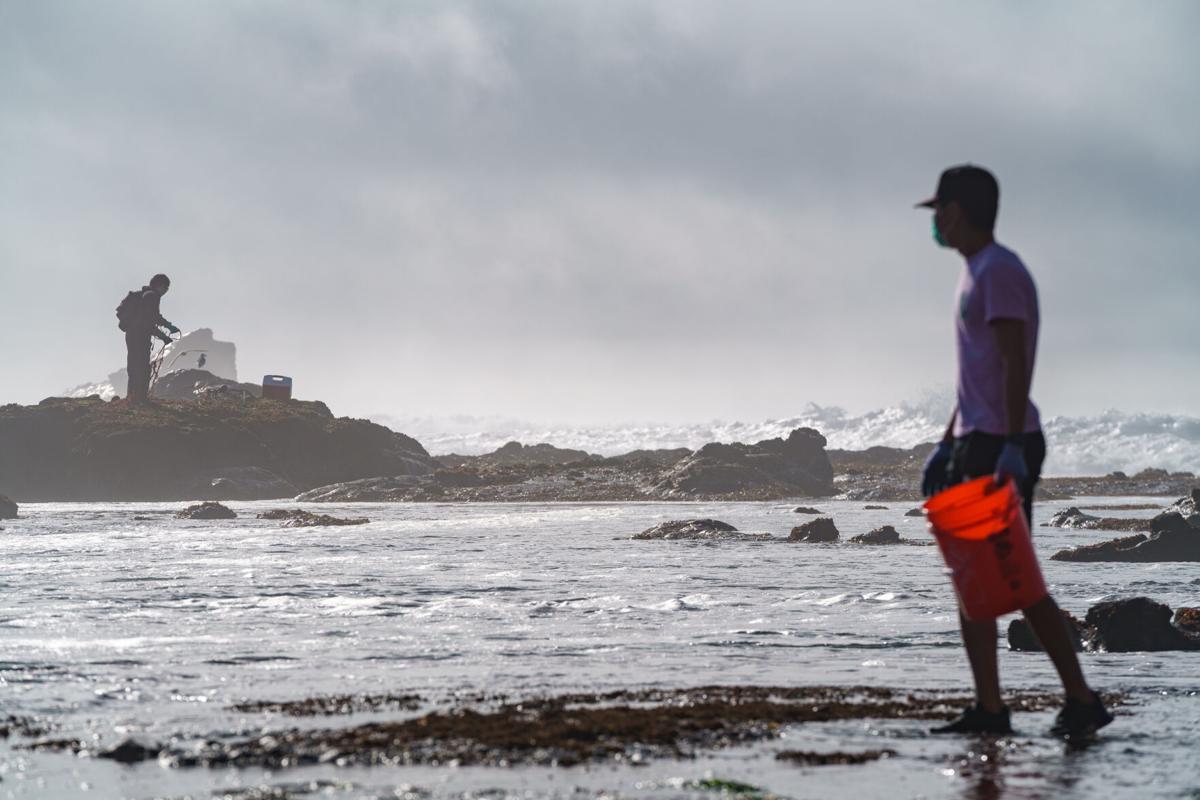 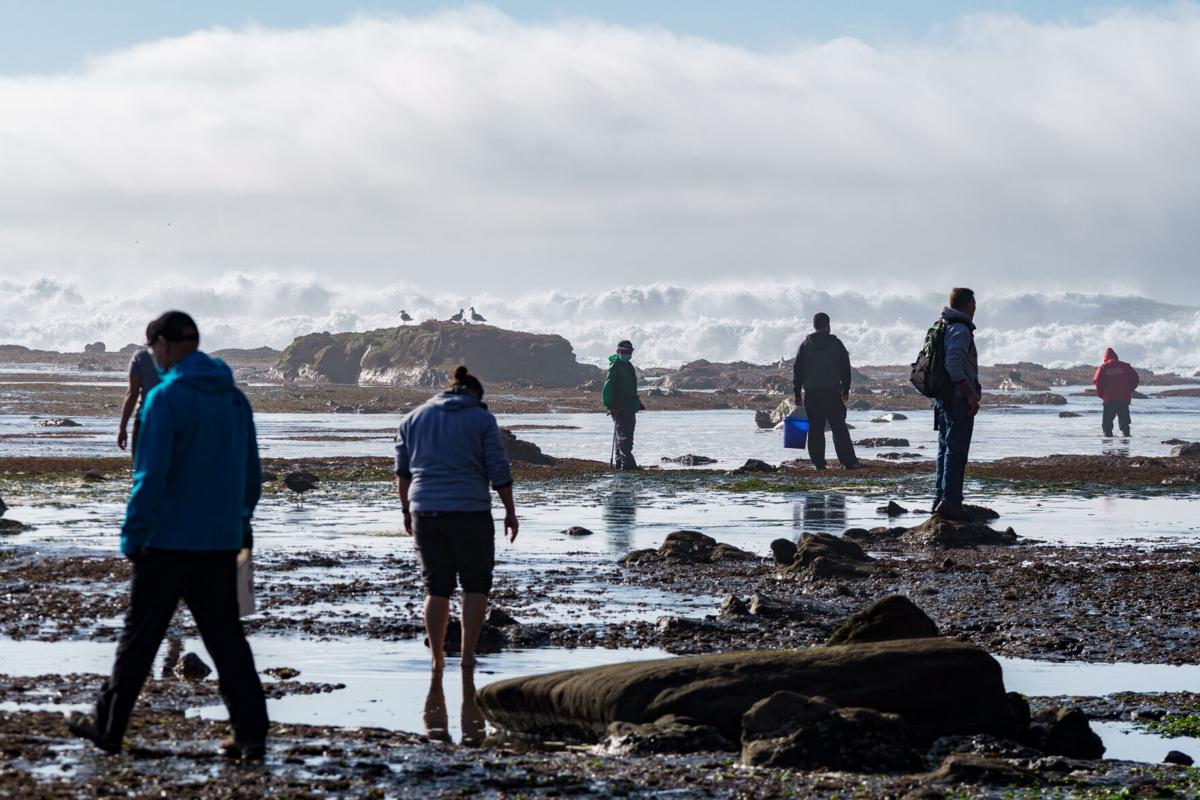 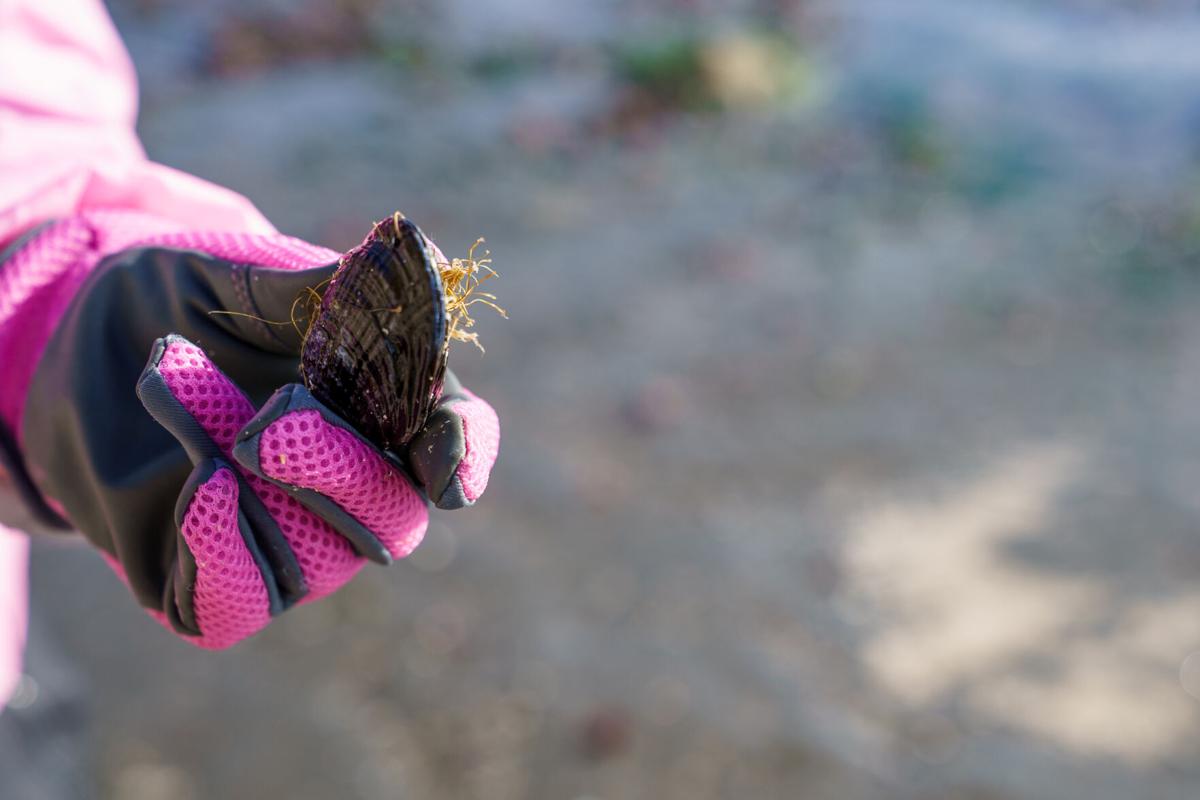 A woman shows off a mussel she just picked out of the tide pools at Pillar Point Reef on Friday, Jan. 8, 2021. Adam Pardee / Review

A woman shows off a mussel she just picked out of the tide pools at Pillar Point Reef on Friday, Jan. 8, 2021. Adam Pardee / Review

CORRECTION: This updated story corrects a previous reporting error that misstated the boundary of the Pillar Point Marine Conservation Area. This version also clarifies what activity is permitted within the conservation area. More information can be found at the California Department Parks and Recreation website.

Over the weekend, Mavericks Beach became a hub for more than just spectators hoping to watch surfers ride some of the best waves in years. Closer to shore, low tide brought many young visitors and families, carrying buckets and shovels.

As these visitors walked onto the exposed reefs, they hoped to dig for mussels, urchins and snails that they could bring home and eat.

Yan Li, a resident of Foster City who recently moved from Texas, left with a half bucket of mussels that she planned to cook with her husband. “Getting the seafood to cook is good, but most importantly is having fun collecting. We heard from our friends that it was a good time,” she said.

Jim Lee, from Oakland, was there with his family. “It’s something different and a way to get the kids out of the house,” he said.

And like several others, he had learned the basics of foraging from a YouTube channel called Outdoor Chef Life.

The majority of beachgoers that day wandered within the most accessible part of the exposed reef, which also happens to be where harvesting seafood is allowed in limited amounts.

However, there were a handful who had, perhaps unknowingly, encroached into a zone with a special state-granted status where nearly all harvesting activity is prohibited.

Just north of an invisible, unmarked boundary that marks the end of the Pillar Point beach begins what the California Department of Fish and Wildlife designated as the Pillar Point State Marine Conservation Area, where nothing except Dungeness crab and squid can be taken. And a walk further north along the coastline the state conservation area turns into the Montara State Marine Reserve and that overlaps with the Fitzgerald Marine Reserve, where take of anything kind is absolutely not allowed

This border land has preoccupied local environmentalists who worry the area is being overrun by visitors who could threaten the marine ecosystem at Pillar Point and the surrounding areas. They are calling on county and state agencies to take steps to create better communication materials and manage the flow of visitors.

One man from San Francisco who requested that his name not be printed because he inadvertently committed a crime by harvesting urchins within the marine reserve said he was aware that there was a boundary. However, he believed he was still in the allowable zone. He and his friend had carefully researched the area, but, despite their attempt, they were surprised to have gotten it wrong.

“People have good intentions. They do their research, but they don’t know. It really just takes better signage,” he said. “We promise we won’t do it again.”

That day, three California Department of Fish and Wildlife wardens stationed themselves at the main entrance at the West Shoreline access point. They posted images of the various marine life that visitors might encounter along with notes about the maximum weight each person was allowed to take per species. The wardens checked to make sure every harvester had a day license and weighed their buckets.

However, from their station, the wardens couldn’t tell whether the contents of people’s buckets were caught within the legally designated area or not.

One group that was on their way out after a few hours of harvesting included Mike Rosenthal, a chef from San Francisco. He and other chefs had heard about the area by word of mouth. Among his circle of friends, they agreed, “Uni (urchin) is delicious,” he said.

But Rosenthal admitted he was surprised with their catch. “When we saw the crowd, we had a feeling we weren’t going to get as much as we expected.”

Even though it may be fun for families to collect mussels, sea snails and urchins, when we live in a densely populated area as we do, too many families having "fun" can damage the environment. There are over 7 million people in the Bay Area. Due to the confinements of the Pandemic, an unusually high number of people are driving to our local beaches for recreation. To protect this ecosystem, we need to implement new restrictions on public shellfish collection. There are many other ways to have fun – without taking anything from the environment, building sand castles, identifying local birds, playing tag on the beach, etc...