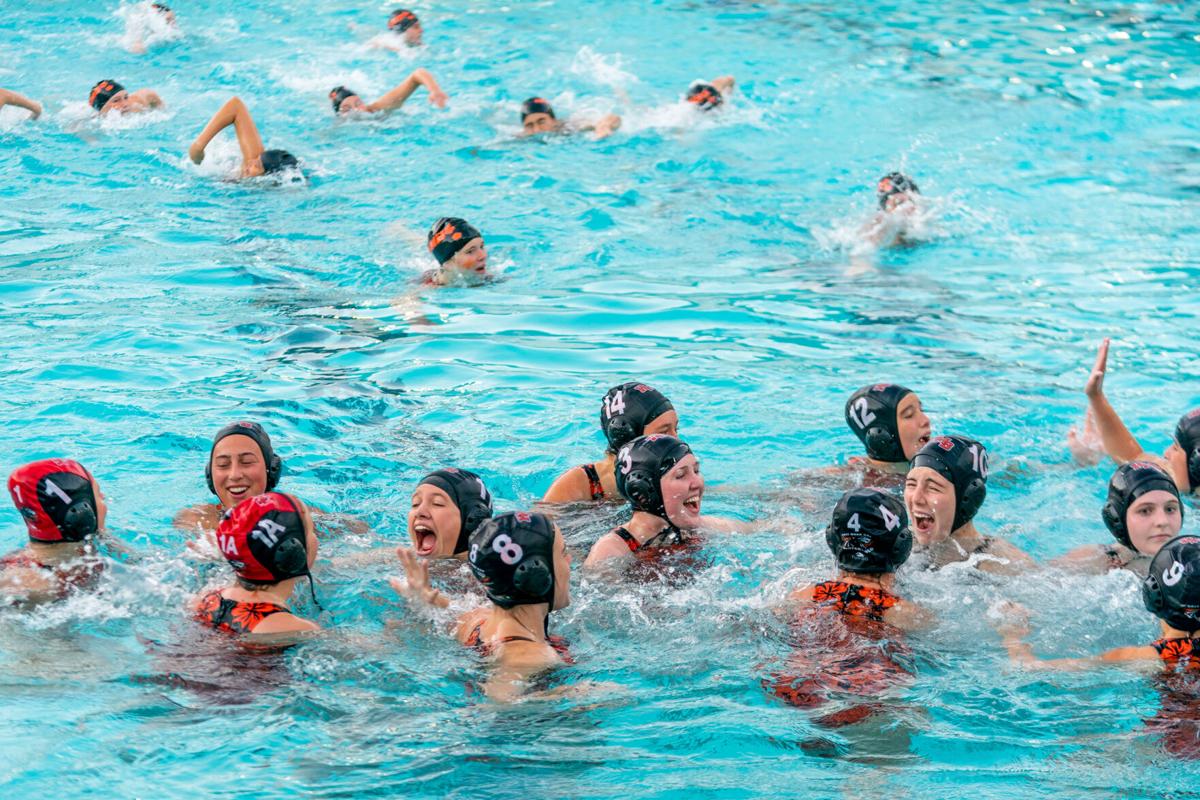 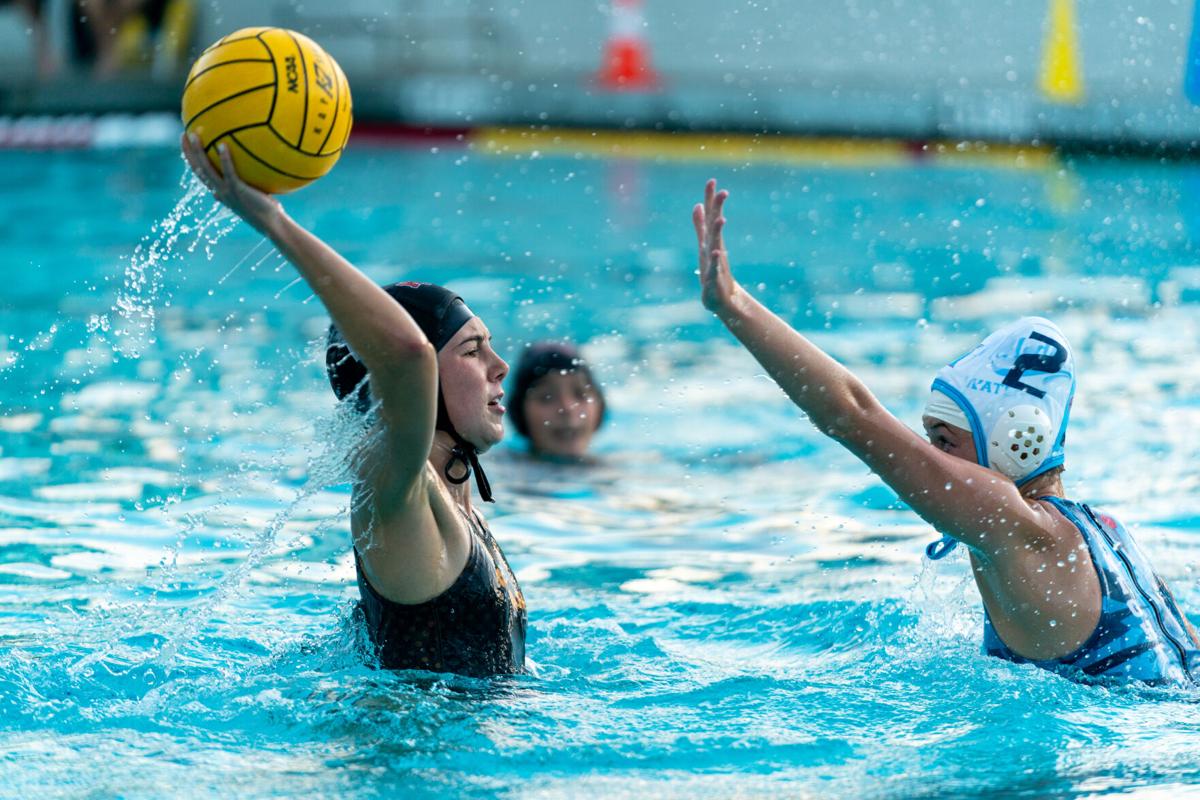 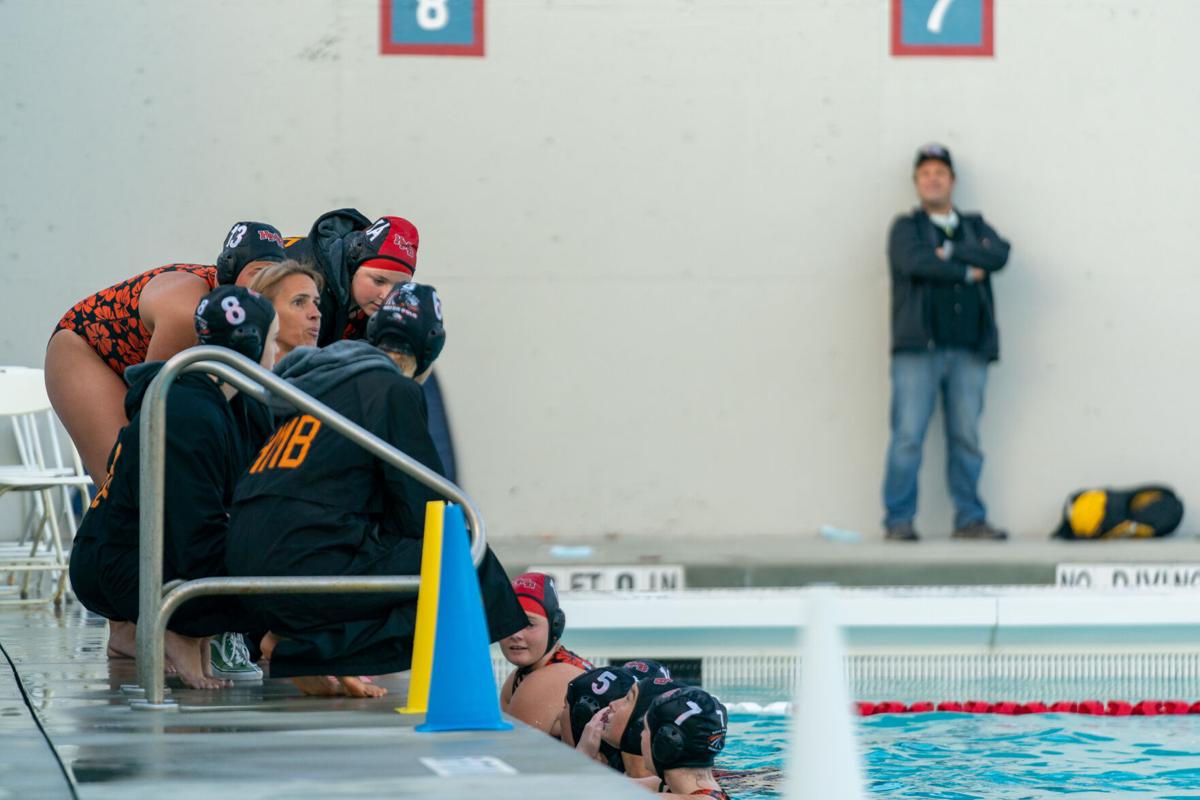 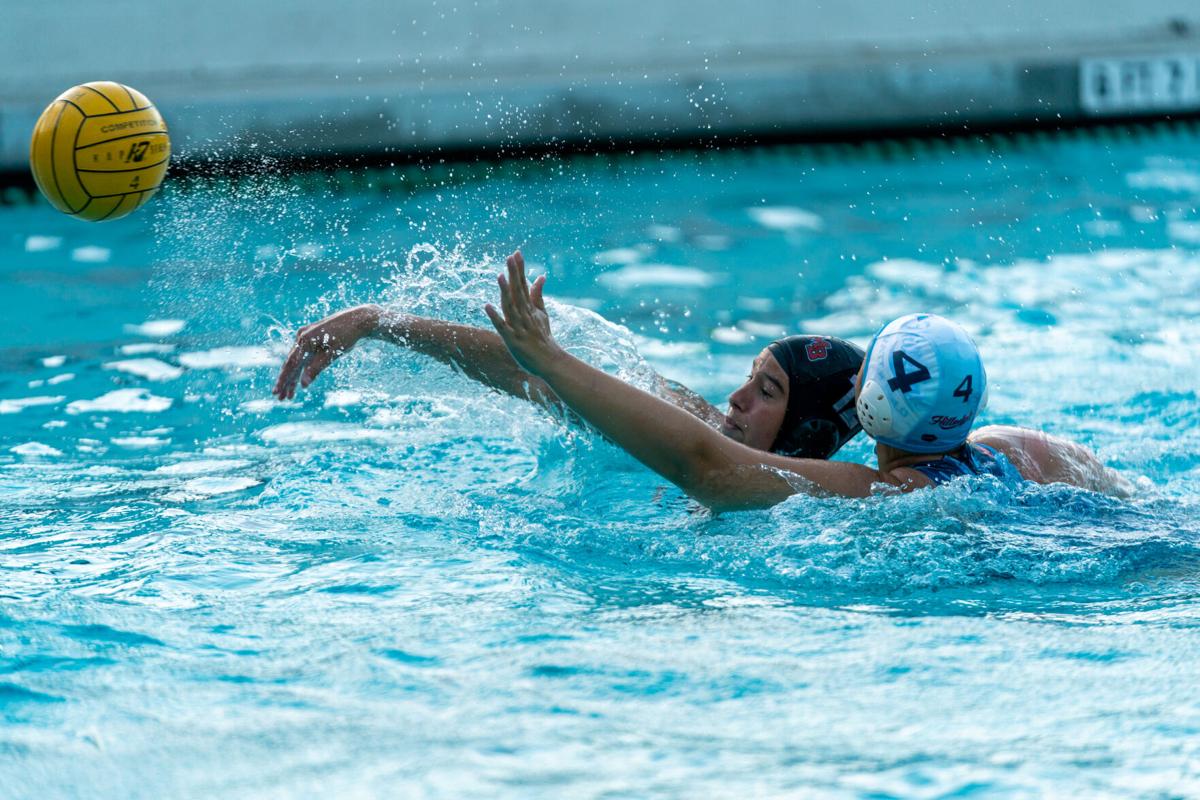 In a nail-biter on Oct. 25, the Half Moon Bay High School girls varsity water polo team secured an 8-7 victory over Hillsdale High School, clinching the Peninsula Athletic League Ocean Division title and sending the girls to a Central Coast Section play-in match. The girls have thrived together during a pandemic that is likely not even their most pressing challenge: They don’t have a home pool deep enough to allow them to host any games.

After last week’s win, the girls jumped in the pool, splashing and hugging after a close one. Around them hung posters to celebrate seniors Sara Gorman, Alexandria Shick, Ashley Owen, Holly Quick and Jess Palmer-Sammons, in their final league game. They finished 12-3 overall and 10-2 in league play. Seniors are typically honored at the team’s home pool. In this case, however, they were honored on the Knights’ pool deck as the Half Moon Bay High School pool doesn’t meet league regulations.

“I cannot tell you how proud I am of these kids,” said Tracy Hilvert, Half Moon Bay High School varsity and junior varsity girls head coach. “Always having to win on the road is not normal. Not having friends and classmates cheer you on is sad and hard. But with this challenge comes a strong commitment to each other.”

For the last seven years the high school water polo teams have traveled across the Peninsula for every game. The Cougars’ success belies the fact that even practice is difficult at their own pool. The Half Moon Bay High School pool is shallow, five feet, at each end, and deep, around 10 feet, in the middle section.

“The challenge with our current pool is that we can only practice in the inner third of the pool,” said Dale Weber, Half Moon Bay High School junior varsity and varsity boys coach. “There’s a lot of transition stuff, leveraging space and awareness that’s really hard to develop in a limited, constrained environment.”

For a number of years the teams were able to practice for a couple of days a week at the College of San Mateo facilities, but it cost the teams thousands of dollars per season. When the league changed the game schedule, the availability of the pool and game times meant that they would be renting space that would sit empty every other week.

“Not being able to practice in a regulation pool is probably our biggest disadvantage as a team,” said Alyson Osgood, who, prior to Weber, coached the boys teams as well as the girls junior varsity team.

Osgood explained that the athletes don’t have the chance to tread water for the entire practice, and they miss out on productive counterattack practice. Full court scrimmaging as a team at the high school pool is impossible.

“It’s really unfortunate because that is where athletes get the most accurate representation of real game play,” said Osgood. “It’s not as controlled as half court can be.”

The lack of a full pool also affects new players and junior varsity teams because often when they go to their first game they have never played a full court.

“Learning transitions and how not to turn the ball over is challenging,” said Palmer-Sammons, one of the seniors and the leading scorer for the Cougars. “Transitions are so key and learning our outlet path and trying to keep the ball.”

Osgood played water polo at Half Moon Bay High School. She said she didn’t realize what she was missing out on until she joined a club team in Burlingame and understood the multitude of activities and drills in which you could develop skills that are not possible to conduct at the Half Moon Bay pool.

“It really means that each season is half of what it could be in the sense that we get to play in league games and tournaments, which is awesome, but at the same time, practicing is so limited in what we can do spatially, that we can realistically only do half of the kinds of activities you could do in a regulation pool,” said Osgood.

Coaches are left struggling to come up with the most creative activities possible in the space they have and help athletes develop the necessary skills. Without a home pool athletes lose the home field advantage and the morale boost of bleachers packed with classmates and friends.

“I think it would definitely be a positive if we were able to play at our pool because we’d have a lot more fans,” said senior and team captain Owen. “We still get some at the away game but obviously not as many as we would have at home.”

“Not having home games is super disappointing,” said Osgood. “It detracts from their social experience as student-athletes because they don't get that experience of home pool spirit, and classmates, teachers, and friends all coming by to support you at your home games.”

“Always having to go to a new pool also means adjusting to the nuances of each pool,” said Osgood. “Is the water harsh on your eyes? What do the shot clocks look like and where are they? How wide is the pool? What are the cages like? Even though these seem like small things, they can be really distracting.

“When you play at your home pool you don't have to think of these things,” she said. “As a result, I think Half Moon Bay High School water polo athletes are some of the most adaptable athletes you will come across.”

In Northern Peninsula aquatics, athletes across the board struggle for pool time as most pools are private and not open to high school sports. This also means there aren’t many options for affordable swim lessons or engaging youth in water polo.

Osgood and Hilvert explained that just about every player comes in having no prior water polo experience. If they are lucky, they’ll get an athlete who has watched water polo before or had a sibling who played. Hilvert added that, since the high school doesn't have home games, more than half of her girls had never even seen a game before.

“They will have to learn how to catch and throw a ball too big for their hand, all while swimming with defenders holding, grabbing and dunking them,” said Hilvert.

Osgood and Hilvert restarted the Coastside Water Polo Club two years ago to get the water polo players in the water as much as possible, but COVID-19 made that challenging.

“It was very nerve-wracking,” said Quick, senior and team captain, on her first practice the summer before her freshman year. “It was really intimidating. And learning how to play a new sport was challenging.”

This past summer Hilvert offered hours in the pool for players to give the incoming freshmen a taste of the game and skills required. There are club teams available but they can be expensive. The few teams are competitive and require a lot of travel. Osgood said that fewer than a third of her players played on club teams over the hill; this season Hilvert only had one athlete play on a club team.

“We need a pool,” said Hilvert. “These athletes need to be able to play home games. Half Moon Bay High School swim team needs that too. The community, Mavericks Swim Team, lap swimmers all deserve a bigger, deep, updated pool.”

Maybe our city can actually rally around folks like John Kobilsen, et al. who have been begging and pleading as well as trying to raise money to improve this pool. We have so many athletes here and it's such a waste of gas and time to get to the other side.

We also have a whole bunch of super wealthy people who live here on the coast who should realize the opportunities that their future and past children will have/haven't had. For those billionaires and millionaires who just want to live here without kids, you can't tell me that property values won't skyrocket when there's an extremely competitive high school on the coast.

I know it costs a lot of money and it costs a lot of money to maintain but if we can rally around the library as quickly as we did and other community projects like the boys and girls club, how is it that we can't improve an existing pool? Seacrest gets stuff like this done. Council members? Millionaires and billionaires here in the community where they care about their property values?

Let's all jump into this one.

Yes! They need a pool.