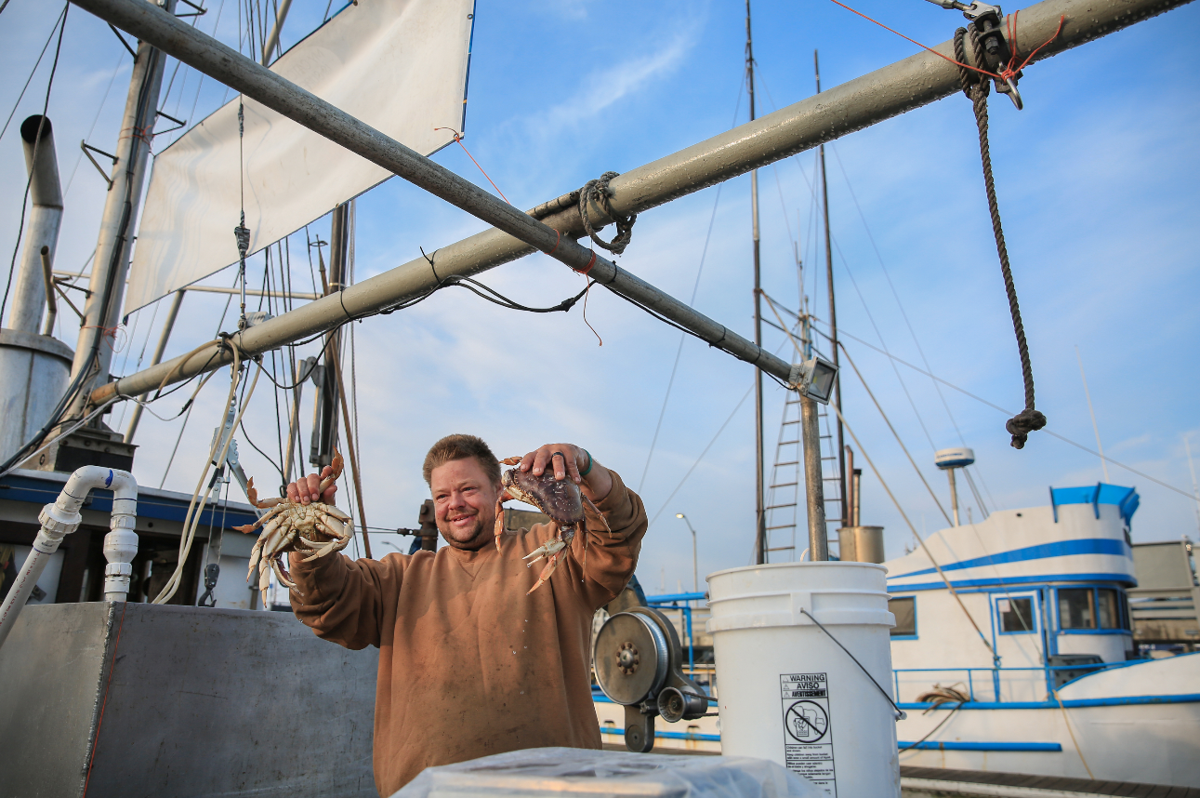 Willie Boling happily holds up crabs at Pillar Point Harbor in 2018. This year, crab fishermen are holding out for a better wholesale price and are not yet fishing. Review file photo 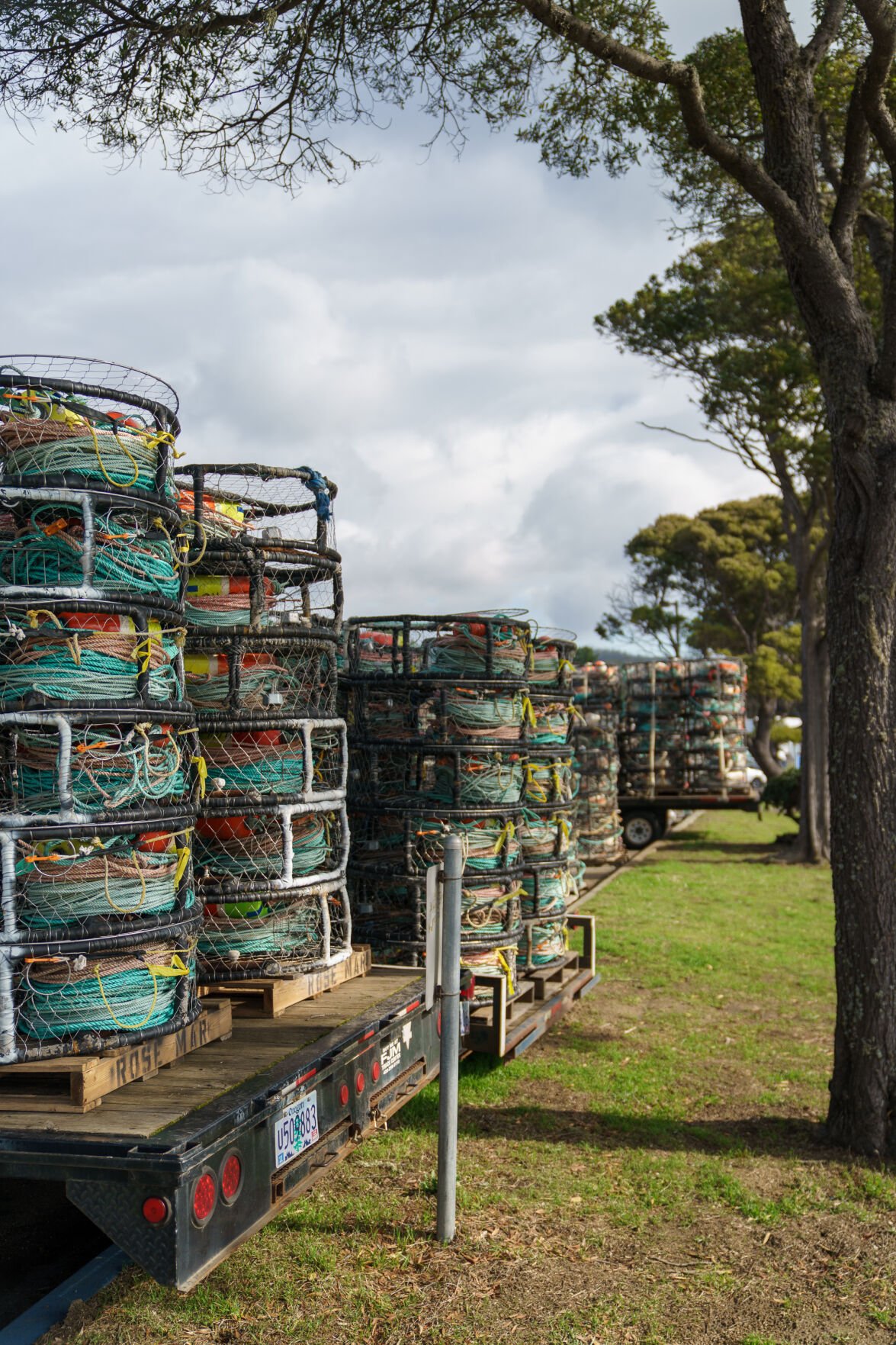 Crab pots are still stacked and staged in the parking of Pillar Point Harbor on Monday, Dec. 28, 2020. Adam Pardee / Review

Dungeness crab fishermen in and around Half Moon Bay have banded together with fleets in San Francisco and Bodega Bay in a historical show of support by continuing to sit out the already-delayed season until they can settle on a price for their catch.

The unified decision came after fishermen refused to go out when the commercial Dungeness crab season officially opened on Dec. 23. At issue: disagreement with wholesale buyers and processors on a price for their haul.

In the days since, there have been mounting concerns about how the delays are placing fishermen on edge. Some worry that could lead to rushed and disorderly operations. This prompted the Half Moon Bay Seafood Marketing Association, the San Francisco Crab Boat Owners Association and the Bodega Bay Fishermen’s Marketing Association to join forces in a partnership announced in a joint statement released on Tuesday.

The associations, which fall in the same regulatory district, hope that by working together, they can avoid what in the past has been described as a “shotgun start.” Much like in a race, once a price settlement is reached in one region, fishermen in other areas catch wind of the news and quickly go out to waters all at once, and, in some instances, with little forethought about weather conditions.

“This historical agreement allows at least some certainty that fishermen won’t have to endure a ‘shotgun start’ in notoriously dangerous winter weather conditions on top of all the other challenges that the 2020 season has brought to bear,” according to the statement.

This “gentleman’s agreement” asks fishermen to wait 24 hours after the Oregon fleet has reached a price settlement, a process that was ongoing at press time. Only then, and after the three California associations have met, can fishermen in Pillar Point, San Francisco and Bodega Bay set out their gear.

Every year, the days leading up to the opening of the commercial crab season are filled with negotiations with wholesalers. Knowing the price buyers will pay per pound offers fishermen assurance that their efforts will be worthwhile by the time they haul in their catch.

But fishermen at Pillar Point Harbor are calling the price offered to date simply unacceptable.

Much like its counterparts, the Half Moon Bay Seafood Marketing Association — the negotiator for the San Mateo County fleet — failed to reach a settlement with several wholesalers before the Christmas holiday. The fishermen decided they would rather sit back than risk a loss from a low fixed price.

The Coastside has attracted a growing base of individual customers and local fish markets that buy directly off the boats. But many fishermen rely heavily, and in some cases exclusively, on sales to wholesalers that distribute locally caught crab throughout the country and outside the United States.

Several fishermen interviewed said one distributor in particular, Pacific Choice Seafoods Co., based in Eureka, seems to dictate the price. During this year’s negotiations, Pacific Choice offered between $2.25 and $2.30 per pound, a range comparable to other ports.

Local fishermen were reluctant to state a reasonable price so as not to jeopardize negotiations. Some fishermen said it would begin at $3 per pound to cover the cost of fuel, maintenance and labor.

Jon Steinman, vice president of processing for Pacific Seafood, Pacific Choice Seafoods Company’s parent company, pushed back against the idea the company is pushing fishermen into a corner.

“The notion that Pacific Seafood is holding up the Dungeness season is absurd,” Steinman said. “We are one of many other major buyers on the West Coast. We have to do the best we can for our customers, our fishermen and our team members who are counting on us to run a good business and be here for this season and years to come.”

The battle over wholesale crab prices isn’t a new phenomenon and fishermen said they go through some version of it every year. But fishermen said this year feels particularly bad during the pandemic. They were looking to the Dungeness crab season as a financial bright spot.