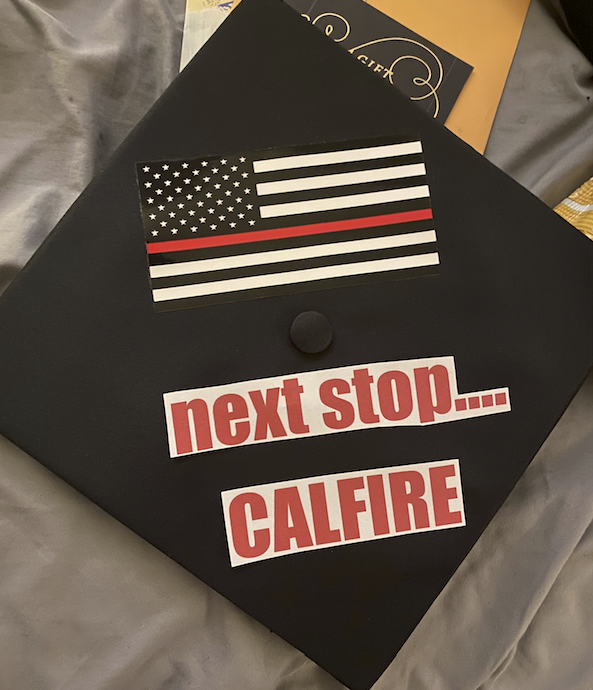 Recent Half Moon Bay High School graduate Juan Sarabia is working to become a firefighter on the Coastside. His interest began with a tragic death in the family. Photo courtesy Juan Sarabia 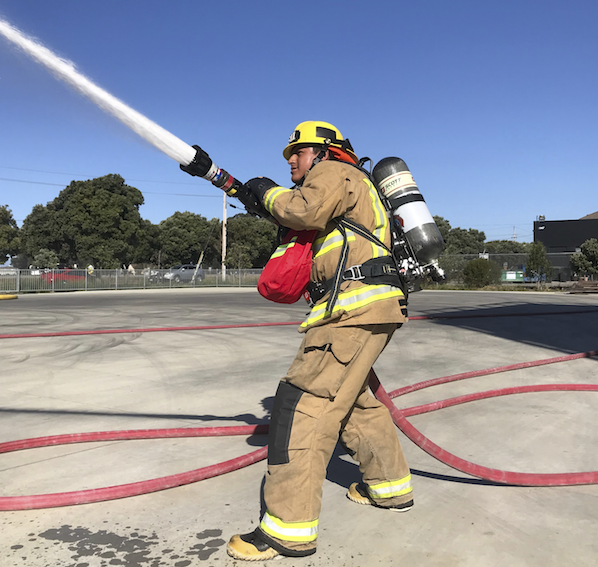 Juan Sarabia has been training to become a firefighter even before he would normally be allowed to participate in a ride-a-long. Photo courtesy Juan Sarabia

Senior year was not what recent Half Moon Bay High School graduate Juan Sarabia expected. Instead of beloved rituals, such as prom or the senior picnic, Sarabia spent hours videoconferencing and babysitting his 2-year-old brother. Sarabia admits he struggled to adapt to life during a pandemic, even suffering his first panic attack.

“It’s been challenging,” he said.

Sarabia, 18, grew up in Half Moon Bay. He enjoys riding his bike, surfing with his friends and hanging out at the beach. He’s also formed a special connection with the local fire department, as he’s spent more than 400 hours riding along with firefighters from Station 40 in Half Moon Bay. His goal is to one day become a CalFire firefighter.

Sarabia remembers that in one day, when he was in middle school, his parents did not pick him up from his afterschool programming at the Coastside Boys and Girls Club. He heard sirens and saw fire engines racing down Highway 1 and he had a feeling something was wrong.

He later received a call from his father asking him to go home and see if his uncle was the one involved in the car crash. Sarabia grabbed his bike and went to the scene where he saw fire and emergency personnel lifting his uncle onto a stretcher. His uncle, who was also his godfather, died that day.

“It had a huge impact on me,” he said. “I saw how the firefighters were trying to help my uncle and I realized that is what I want to do.”

Though he was a year too young to join on a ride along, fire Capt. Tyler Martin assisted in getting permission from the Battalion Chief to allow Sarabia to start tagging along on calls.

“I told him to get approval from his parents, go home put on navy pants and a T-shirt and come back to the station. From there it’s history,” Martin said.

For about two and half years Sarabia has been riding along and hanging out with Martin and Coastside Fire Protection District firefighters at least a few times a month, for 12 hours at a time.

“He’s a joy to be around. He’s always got a smile on his face, he keeps busy and has a strong work ethic,” Martin said. “It brings it back to why we got into this job when you have a guy like Juan riding along with you. He just brings his positive attitude.”

Sarabia found every possible way to get more involved with the fire department. He said said his first fire call was one day after a medical training. A wildland fire broke out near Higgins Canyon Road.

“I got to feel the heat of a real fire on my face for the first time,” he said. Sarabia observed the scene and assisted the firefighters by getting them water. “It was a nice experience.”

Beyond participating in ride alongs, he enrolled in and completed the Community Emergency Response Team training and assisted with training new recruits. He also joined the San Jose Fire Explorer program, designed to teach students about fire fighting techniques. Sarabia wanted to apply for the Half Moon Bay Volunteer Fire Department academy last fall but was not yet 18 years old. He said once things return to normal and the shelter-in-place ends he’s interested in joining the next academy.

Sarabia was recently awarded a $1,000 scholarship by the Volunteer Fire Department to continue his path toward becoming a professional firefighter.

“He is an outstanding young man with great dedication to his community, and a maturity beyond his years,” said Chad Fairbrother, an engineer with the Volunteer Fire Department Chad.

Sarabia said he considers the crew at CFPD his second family.

“We’re all there for each other. We workout together. We wash the engine together,” he said. “I’d like to work and retire on the Coastside as a firefighter.”

Awesome young man. Met him through HMBHS Tennis. So great to see. Best of luck.