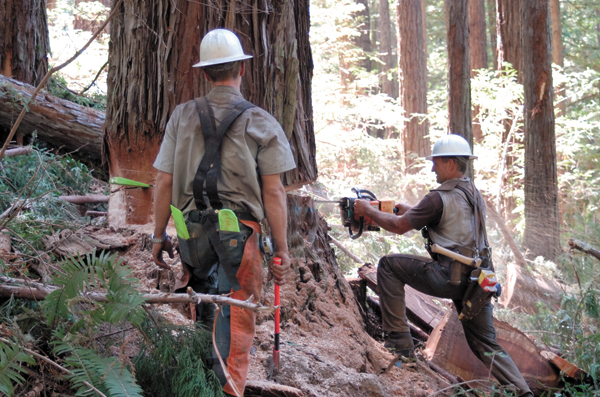 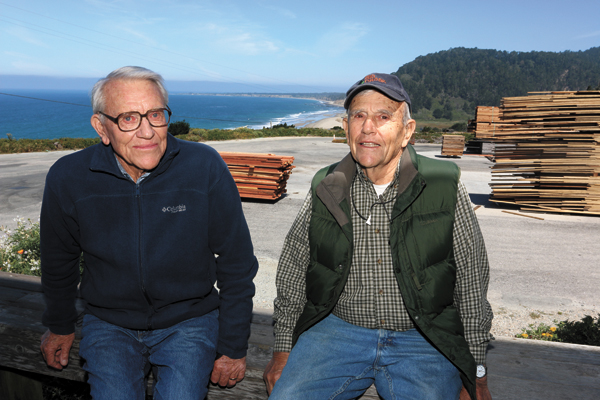 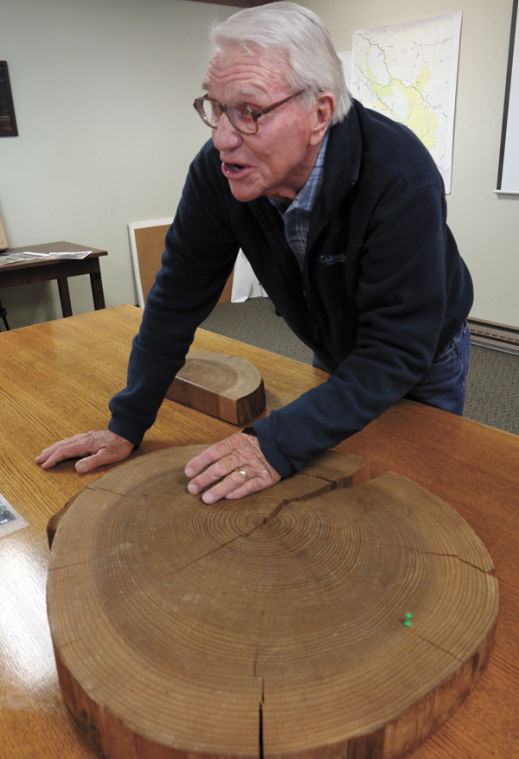 Co-owner Homer "Bud" McCrary, 87, uses a cut of redwood to illustrate how staggered cutting allows redwoods to grow faster and wider at Big Creek Lumber mill in Davenport on Thursday. 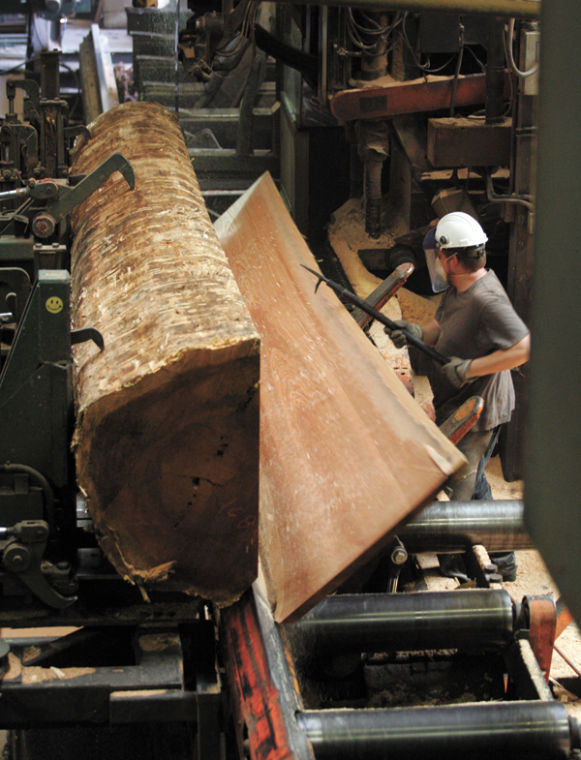 Off-bearer Robert Albrecht pulls a cut piece of wood off a log at Big Creek Lumber mill in Davenport on Thursday. 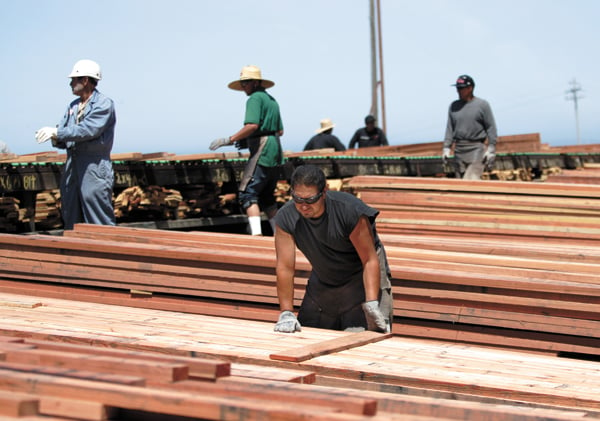 Co-owner Homer "Bud" McCrary, 87, uses a cut of redwood to illustrate how staggered cutting allows redwoods to grow faster and wider at Big Creek Lumber mill in Davenport on Thursday.

Off-bearer Robert Albrecht pulls a cut piece of wood off a log at Big Creek Lumber mill in Davenport on Thursday.

Anyone entering the mill at Big Creek Lumber, south of Pescadero, is immediately hit by a sensory overload — a cacophony of saws, the rattle of conveyor belts and a prominent pine fragrance.

A freshly cut redwood enters the mill and, in a flurry of cuts, the tree is julienned into a pile of boards with some leftover scraps for potting soil.

About 100,000 board feet of timber are churned out of the lumberyard each day — or about enough wood to extend a single two-by-four about 21 miles. All those redwoods are chopped down from the verdant coastal forests from Half Moon Bay south to San Luis Obispo.

The trees are abundant, and demand is nearly endless, but Big Creek officials fear for the company’s future nonetheless. Here on the Peninsula, Big Creek controls the last remaining mill, giving them, in some ways, a local monopoly on lumber production. But company officials refer to that privilege as more like being the last dinosaur.

Over recent years, the lumber company officials say they’ve watched as thousands of acres of coastal hills have been “locked up” through conservation acquisitions and easements. The lumber company is not celebrating a new $300 million Measure AA bond approved by voters earlier this month to expand and maintain protected wilderness under the Midpeninsula Regional Open Space District. Big Creek officials fear the new pool of money could put the remaining open timberlands in the crosshairs of an expanding greenbelt up the Santa Cruz Mountains.

Back in 1980, California was self-sufficient for its lumber products, pointed out Big Creek spokesman Bob Berlage. But today more than 80 percent of the wood is brought in from out of state, mostly from Canada. The net effect, he says, is that Californians are tightening control of local resources and outsourcing the ecological damage elsewhere.

“There’s a huge environmental impact from transporting timber thousands of miles,” he said. “It’s counterproductive to run the local timber company out of business.”

It would stand to reason that a timber company would have misgivings about conservation because it goes against profits. But Big Creek is unique in this regard. The company has a sterling reputation for conservation. Since the 1960s, the company’s co-founders, brothers Homer and Frank McCrary, have adhered to a practice of logging only a fraction of the redwoods on their properties, giving the forest more than a decade to recover before the lumberjacks return. Back when they started, the only requirement for lumberjacks was to bring along a shovel in case a fire started, said Homer McCrary.

“If you owned the trees, you could just cut them all down,” he said. “But people were getting very upset with clear-cutting … we had to come up with a method of harvesting that was environmentally sound.”

In fact, the company is largely credited with helping create the concept of sustainable forest management back when the industry lacked regulations. McCrary later was one of the founding directors of the Land Trust of Santa Cruz County, and he remains on the group’s advisory board. And he may be the only lumber company owner to have led Sierra Club hikes through his timberland. That background has given the company high marks among environmental groups.

“Big Creek is certainly the best conservation-minded operator that I’ve ever worked with,” said Paul Ringgold, vice president for land stewardship at the Peninsula Open Space Trust. “It’s a profit-making company, but they’ve demonstrated the highest ethical regard for the work they do.”

“Big Creek was a pioneer in trying to do it the right way,” echoed Diane Talbert, board president of the Sempervirens Fund. “In some ways Big Creek has more knowledge of these forests than anyone else because they’ve been dealing with it for so many years.”

As the largest and some of the oldest trees in the world, redwoods continue to hold a special place in the hearts of many Californians. Decades of clear-cutting of old-growth forests made the redwoods an icon of preservation efforts.

Both Big Creek officials and multiple environmental groups say things have changed since lumberjacks were perceived as the scourge of the sequoias. State and federal protections now require approved timber harvesting plans before any redwoods can be chopped down. No more than 50 percent of the trees can be harvested on any plot of land. Big Creek officials say they typically harvest only six trees per acre.

Despite their commitment to sustaining forests, Big Creek officials say they are still made out to be a bugaboo looking to ax down the forests. Berlage points to maps put out by the Sempervirens Fund that mark the company’s 8,000 acres of forestland as a goal for future acquisition. Many other private landowners who used to allow Big Creek to harvest on their land have now signed conservation easements, he said. When Big Creek employees watch things like that, they can’t help but be concerned about the long-term viability of the business, he said.

“They’ll say nice things about us, but they’ll still use the issue of timber harvesting as a fundraising tool,” Berlage said. “There’s people out there who want to run us out of business. It’s as difficult for us as it ever was.”

Asked about the maps, Talbert of Sempervirens said they weren’t specifically looking to acquire the land, but rather instill “common values” of preservation on the properties.

In a true paradigm shift, many conservation groups are now indicating they want to partner up with the lumber company. Sempervirens is currently in talks with POST and Big Creek to allow selective tree harvesting along a portion of the San Vincente property, about 8,500 acres near Davenport.

“I would say that’s our first big shift in doing something like a timber harvesting program,” Talbert said. “We definitely see a place where we can both stand side by side.”

Nonetheless, Big Creek officials remain concerned those gestures may not be enough to sustain the company and its 200 employees for the long term.

“Any potentially harvestable forestland that is locked up is a threat to our company’s long-term viability,” Berlage wrote in an email. “It doesn’t really matter which conservation organization is involved. Locked up is locked up.”

Anyone who has lived near any of Big Creek's harvests over the last years knows well they relinquished their "environmentally correct" status a long time ago. If they'd really done clean harvests themselves, and if they'd declined to actively encourage really awful out-of-area timber operators, they might still have some credibility. They still talk their old talk, but they don't walk the walk.

The simple fact remains: almost all the redwoods are gone, and continued harvesting just reduces the remaining pool even more. The long-term viability of Big Creek's business is linked to supply, and there's less and less of that all the time. Connect the dots.

And I suspect the writer won't be the last to misspell San Vicente.

I think the closing quote is significant.

" Any potentially harvestable forestland that is locked up is a threat to our company’s long-term viability,” Berlage wrote in an email. “It doesn’t really matter which conservation organization is involved. Locked up is locked up.”

It appears will not be happy untill he clear cuts the coastside.

This is America folks. If people think the trees are more valuable standing and are willing to pay for it, they will be left standing.

And if One entity wants to pay more for the rights than Another entity wants to, is that not just how it goes? Or do we need to regulate like we do so as to sustain Agricultural land?

"In a true paradigm shift, many conservation groups are now indicating they want to partner up with the lumber company. Sempervirens is currently in talks with POST and Big Creek to allow selective tree harvesting along a portion of the San Vincente property, about 8,500 acres near Davenport."

Hmmm. I think that sounds about right. The woods need to be managed. Open space is valuable. Timber sales can fund maintaining the Open Space. Win Win Win!

I wonder how much loggable land would be left on the Coastside if not for Open Space and Conservation notions promoted by your typical environmentalist?

"“They’ll say nice things about us, but they’ll still use the issue of timber harvesting as a fundraising tool,” Berlage said. “There’s people out there who want to run us out of business. It’s as difficult for us as it ever was.”"

Typical of "environmentalists" like Ringgold. Say one thing and do another. Some just call it lying.

At this point, POST is little more than an investment fund masquerading as a conservation entity. Look at its balance sheet. Look at the huge salaries they pay. Look at the Board of Directors. It is all driven by cash flow - Audrey Rust once bragged to the Coastal Commission about how well they "recycled" money - and MROSD's bond is the new gravy train.

Cannot blame the great folks at Big Creek one bit for being concerned. Berlage probably knows the land better than every person at POST and MROSD combined.

And they know it needs to be logged to be healthy and not present a gigantic fire danger. You do not need to spend more than 5 minutes in Camp Cutter or Big Basin or Memorial to know that is the case. And these folks know how to do it. But MROSD can barely open a hiking trail on a property within 10 years of acquisition.