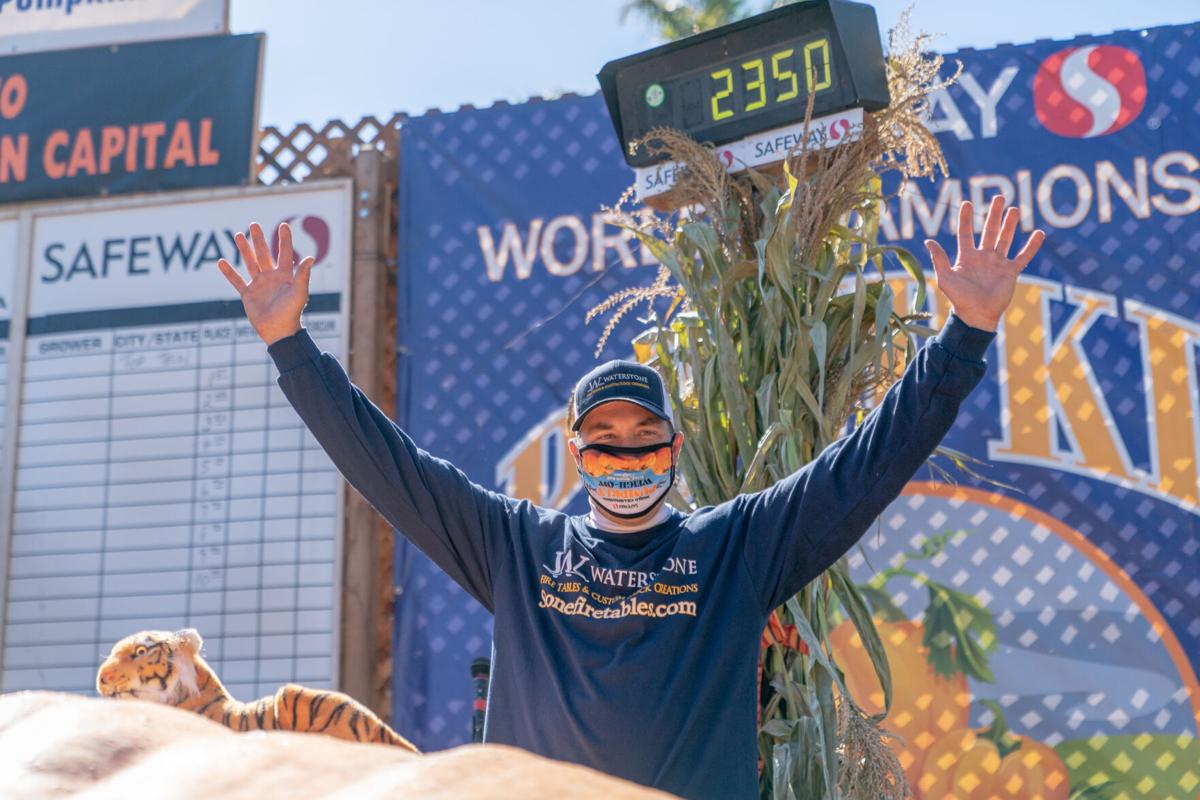 Travis Gienger raises his hands in triumph as he is crowned this year's Pumpkin Weigh-Off Champion in Half Moon Bay on Monday, Oct. 12, 2020. Adam Pardee / Review 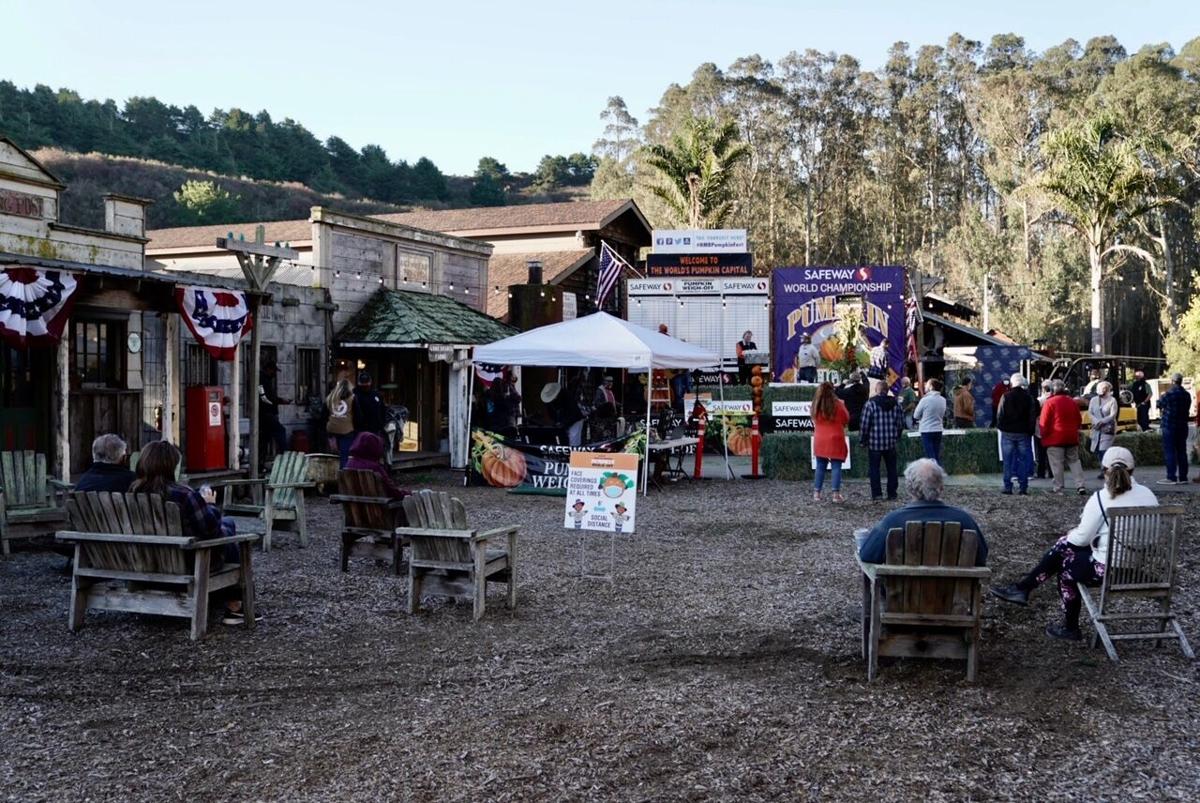 It was a different kind of weigh-off on Monday as only a lucky few were allowed into Long Branch Farm. Adam Pardee / Review 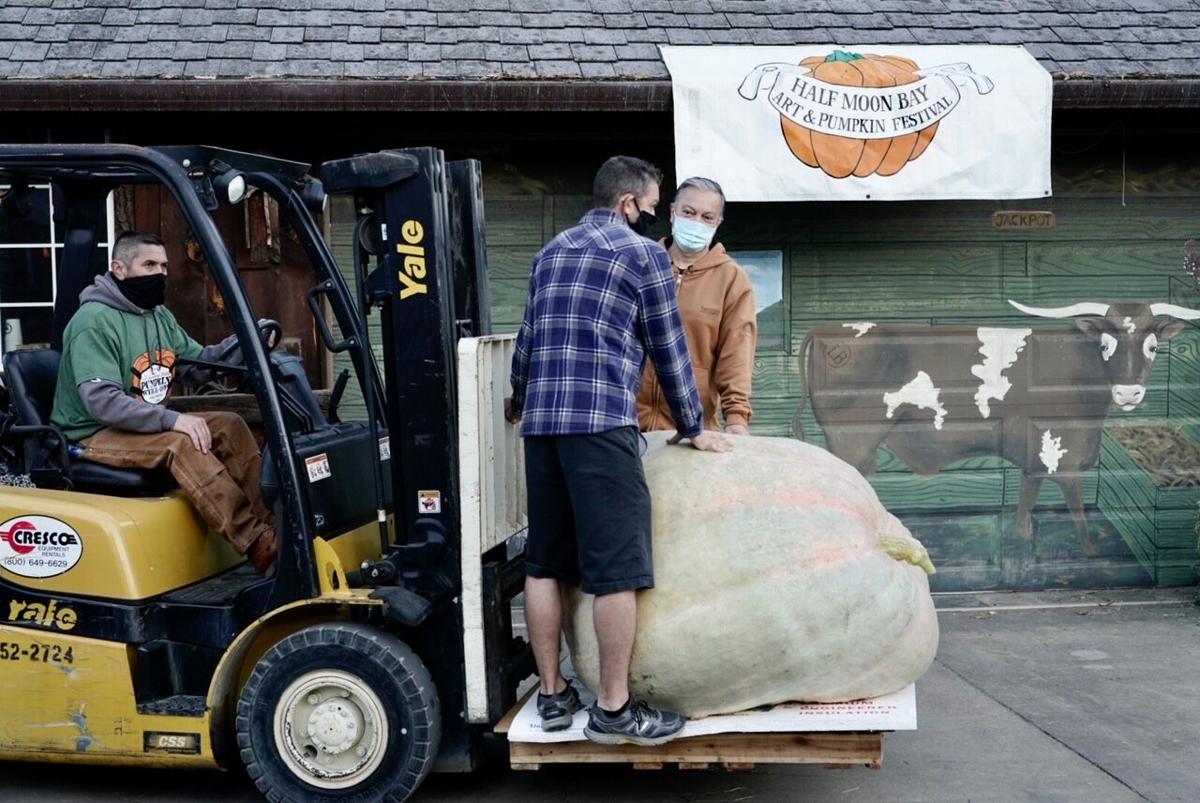 Even the cow mural on the wall appears to be impressed with the size of pumpkins on Monday. Adam Pardee / Review 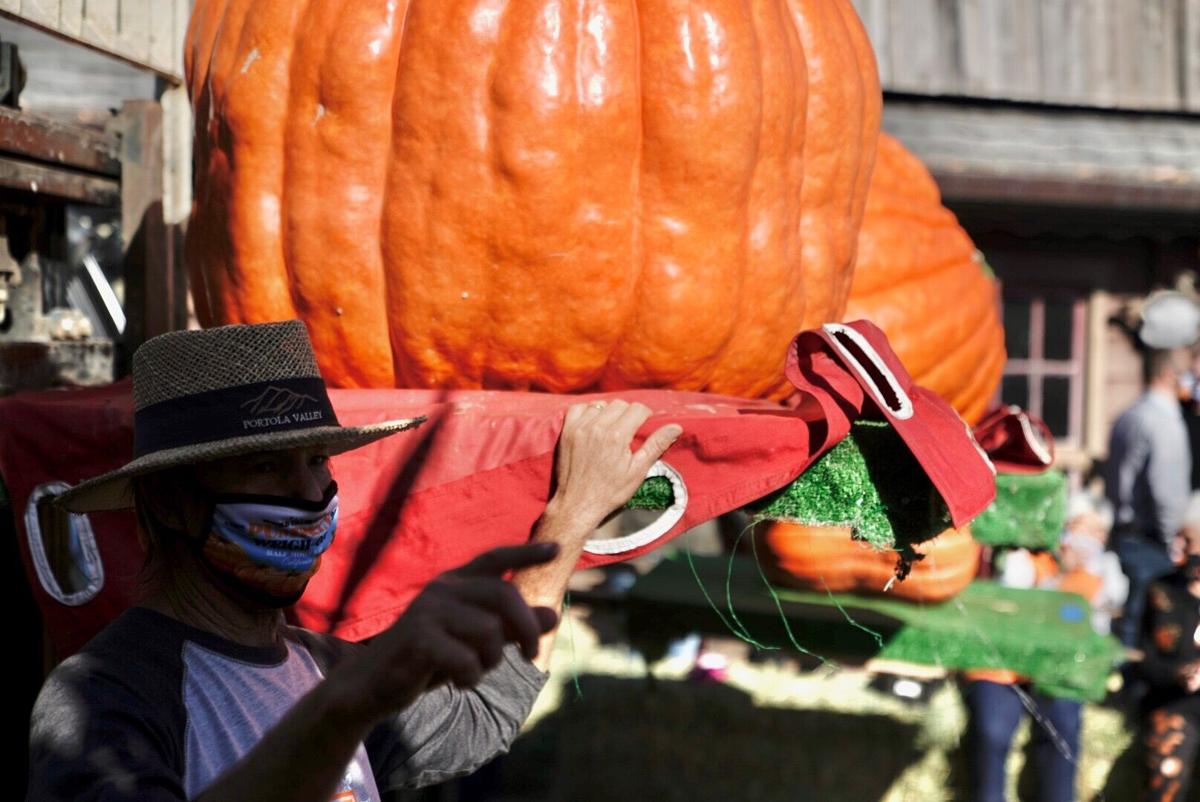 The 36-hour drive was worth it in the end for Travis Gienger and his pumpkin. Gienger, a resident of Anoka, Minn., drove to Half Moon Bay to compete in the 47th World Championship Pumpkin Weigh-Off in Half Moon Bay, held at Long Branch Farms on Monday.

Event organizers saved the best for last. With bated breath, the crowd waited to see if Gienger’s pumpkin, the last of the day and nicknamed the "Tiger King," would beat four-time champion Steve Daletas’ gourd. That pumpkin had just been weighed and taken the lead at 2,174 pounds, just one pound under the state record set last year at the weigh-off.

The green lights flashed and Gienger’s win was secure. His 2,350-pound pumpkin was the second-heaviest ever in the history of the event — Joel Holland’s 2,363 in 2017 owns the top spot — and the heaviest grown in North America this year. It was Gienger’s first time competing in Half Moon Bay’s prestigious competition. He decided to enter and head west just four weeks prior. He loaded his pumpkin and heaps of dirt into his trailer, wrapped the pumpkin with blankets and tarps and watered it at gas stations.

“The roads were so bumpy and the pumpkin just sits there and bounces,” Gienger said. “It was wrapped so I didn’t know if it made it. The fact that it did is incredible.”

Because of the coronavirus pandemic, the Half Moon Bay Art and Pumpkin Festival was canceled this year. The Half Moon Bay Beautification Committee decided to host this year’s weigh-off without public spectators at Long Branch Farms, a 50-acre ranch six miles south of Half Moon Bay. On a clear and sunny Monday morning, media and event staff gathered between old-West style buildings as 30-or-so pumpkins were weighed on a stage erected in front of the ranch saloon.

Each grower was allowed three additional guests or family at the event. Despite the lack of a public audience, the event was lively from start to finish.

The air was buzzing with forklifts beeping in reverse and straining to carry the massive gourds. Drones from the Miramar Event’s production team buzzed overhead. Committee Chairman Cameron Palmer presented each grower and kept a running commentary throughout the event. There was live singing and acoustic guitar from Jim Stevens, a longtime performer at the festival. Those unable to attend tuned into the livestream on Facebook, and the top-10 finishers took part in a noisy, impromptu parade down Main Street later on Monday.

“We feel so bad that the general public couldn’t come out, but we would have opened ourselves up to a lot of criticism if we’d done that,” Palmer said. “That’s why we kept it to growers and media only, so that was a good thing.”

The top heavyweight of the day got $7 per pound, meaning Gienger took home a $16,450 check. Gienger, who has been growing for 27 years, said that he’s been modifying his soil for optimal growth for years using various techniques, including foliar feeding and lots of watering. Jose Ceja of Napa, third overall, had the heaviest California pumpkin at 1,957 pounds. Tasi Paulovitz took home the biggest Coastside pumpkin, which weighed 480 pounds. Eric Carlson of Portola Valley won the Most Beautiful Pumpkin.

For many of these growers, this weigh-off is the time to enjoy the fruits of their labor. At their peak growing time, the massive pumpkins can gain up to 50 pounds a day.

“Whoever wins this competition has got respect from all those growers around the world, not just in California or the nation,” said last year’s winner Leonardo Urena, shortly before his pumpkin landed on the scale.

Prior to the event, insiders believed Urena would come out on top for the third time. The Napa grower came up a bit short, finishing fourth with a 1,940-pound entrant. Urena said for growers in Napa County, the recent heatwaves and fires caused some distress and interrupted the pumpkins’ growth while ash coated the farms. With other weigh-offs and events canceled because of the pandemic, Urena and other growers voiced their gratitude and excitement that the Half Moon Bay event continued, even under much different circumstances than in years past. With mask and social distancing required, Urena was glad event organizers took safety seriously while still holding the competition.

“I’m so glad they didn’t cancel this event,” Urena said. “It’s so important for us growers to just keep going. If they canceled all the events, that would hurt us.”

Time and time again on Monday, the growers assembled at Long Branch Farms pointed to the friendly and communal nature of the Coastside event. They enjoy the fanfare and the shared passion for growing oversized gourds.

The print edition of the Review will feature a full page of color photos from the event. And Review staff writer Vanessa Ochavillo is producing a special audio presentation from the Half Moon Bay World Championship Weigh-Off.

Listen in at Long Branch Farms

The 47th Half Moon Bay World Championship Pumpkin Weigh-Off winners were announced to a reduced crowd on Monday. At a new venue, the Long Bran…

Wow, I'm gonna second Ullom on this one. How did any of this benefit the community outside of Cameron, his family and his brothers new ranch addition that he got to show off for this contest?!!? oh yeah, this move was made BEFORE Covid....no one in our community got any say in it and no one got to see any of it....unless you were invited. This isn't Maverick's, there was no dangers (cliffs, Covid, et al) when the decision was made. This was a marketing, promotion and branding campaign for Cameron and his family's new convention center addition to their visitor serving ranch. A ranch that no one can just meander to from their house; a ranch where the public is not invited. Sad, really. Who cares who the winner is. This was a joke just like the past presidency and a sad day for Half Moon Bay. Go pumpkins and the beautification committee!!

I have to admit, I 'm pleased that a Minnesotan won. Totally makes up for the Vikings blowing it last night. Why didn't they just kick a field goal!!!

How did the money spent on this benefit our community?

You are not familiar with promotion?

What was promoted to who?