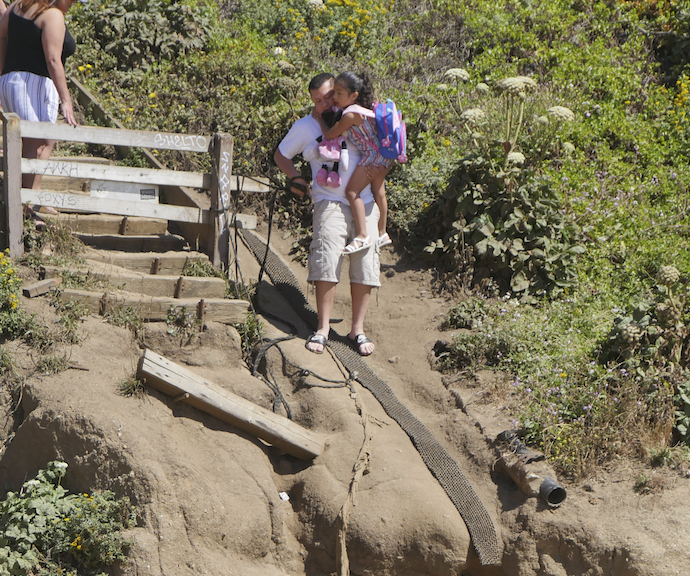 Public access to Montara State Beach has been difficult for years due to the state of stairs on the northern end. Photo courtesy Eric Nelson 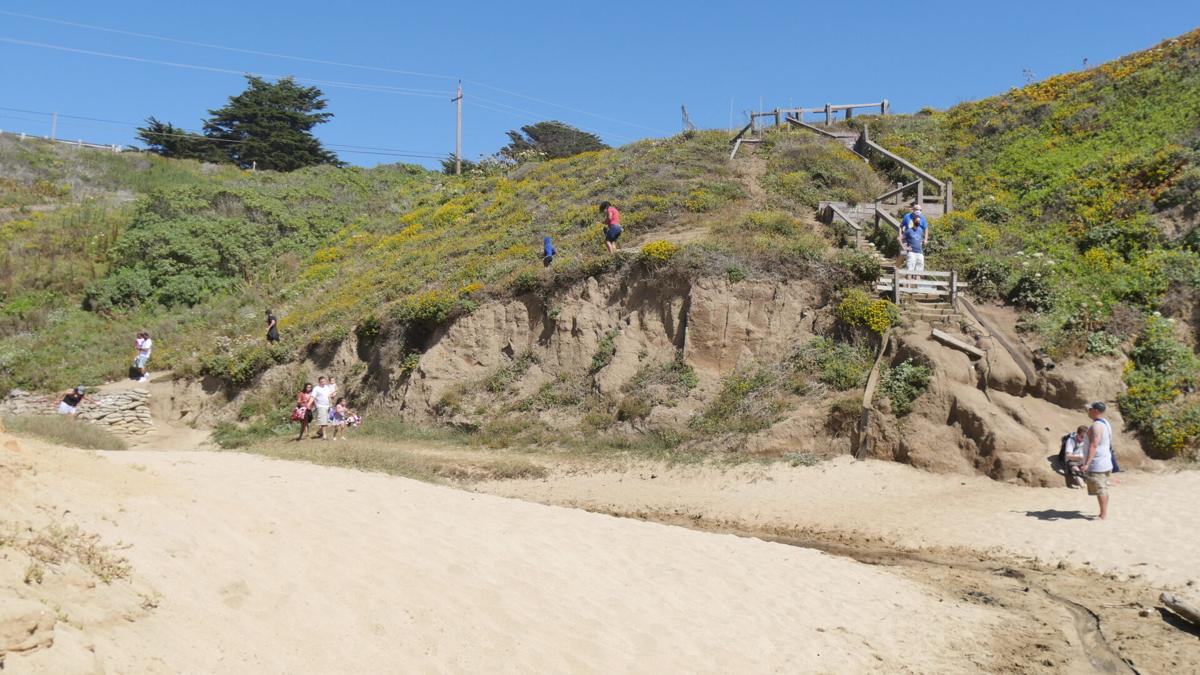 Visitors to Montara State Beach have to navigate their own way down due to the current condition of the stairway. Photo courtesy Eric Nelson

Public access to Montara State Beach has been difficult for years due to the state of stairs on the northern end. Photo courtesy Eric Nelson

Visitors to Montara State Beach have to navigate their own way down due to the current condition of the stairway. Photo courtesy Eric Nelson

As summer trudges on, more and more people, both Coastsiders and visitors alike, are going to the beach. That is easier said than done at Montara State Beach, which for nearly two years has had a public access problem.

The bottom third on the wooden staircase on the northern end of the beach is gone, slowly removed by erosion and occasional landslides. Although it is unclear when exactly the stairs became unusable, they were not accessible prior to the paving on the parking lot by Martini Creek, which began on April 26, 2018, according to Terry Kiser, operations superintendent for California State Parks’ Santa Cruz District. Though he was not directly involved in the closure, Kiser said that safe public access to the beach was important and that State Parks and several other public agencies have been looking for a solution.

State Parks applied for a grant from the California State Parks Foundation last month that would allow for the planning phase, according to Operations Superintendent Joe Walters. It is unclear how much the new path would cost and when State Parks would receive those funds.

After the lot was paved in 2018, State Parks began working with the California State Coastal Conservancy, an Oakland-based agency that builds and maintains access to public lands and waterways. The Conservancy funded a feasibility study, which included a team of civil engineers to survey the trails.

The Conservancy used money from a settlement managed by the California Coastal Commission that is composed of fines levied against the La Costanera restaurant, located on the southern end of Montara beach. Those fines were paid to the Coastal Commission for violating policy regarding parking and operating hours. In 2017, the restaurant reportedly paid as much as $500,000.

The Conservancy spent $35,000 from that Violation Remediation Account to “assist State Parks in evaluating opportunities for establishing beach access at that north parking lot,” according to Tim Duff, a project manager with the Coastal Conservancy. The agency determined that, due to the cliff’s location, angle and stability, replacing the stairs to their original condition was not an option. Instead, the more likely location for a new official path would be a few hundred feet south of the stairs down a natural ravine in the cliff face.

“We basically need another $175,000 to complete that design and secure the permit for that stairway,” Duff said.

State Parks considered removing the broken stairway altogether, but Kiser suggested that might do more harm than good, as people may continue to the beach regardless. Kiser recently spoke with the State Park’s maintenance chief about providing some interim solution. He learned that, because of the angle of the slope and the design, it would require a complete reconstruction, he said.

“We’re ready and willing to work with the Conservancy to get the remainder of the funds over to State Parks for the construction of that project,” said Aaron McLendon, deputy chief of enforcement for the Coastal Commission. “We think it’s a great project and really needed.”

The guy is the story photo carrying a child and trying to negotiate a step incline while wearing beach slippers is definitely in the running for this year's Darwin Award.

An enormous RV dumped it's tank at the Montara State Beach parking lot at Costanera last night. Tourist pee openly on the roadside and dump garbage everywhere, including Recology the green bins on pick up day. The Coastal Commission has destroyed the quality of life for residents. If the visitors want nice stairs they can pay a fee equal to taking the family to the movies.

Thank you to the absolute worthless Coastal Commission for being a mafia run business, providing zero benefit to the coastside.