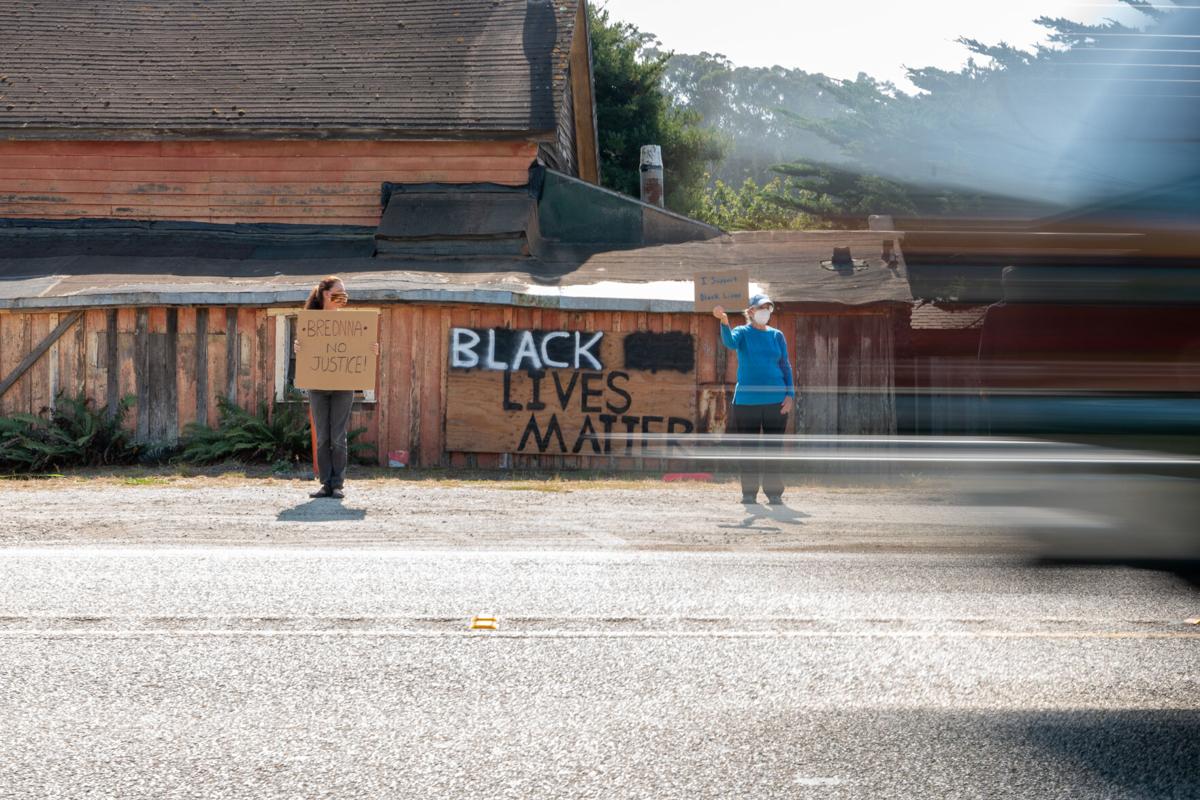 Participants of the Black Lives Matter protest in San Gregorio hold up signs as cars honk their horns in support on Saturday, Oct. 3, 2020. Adam Pardee / Review 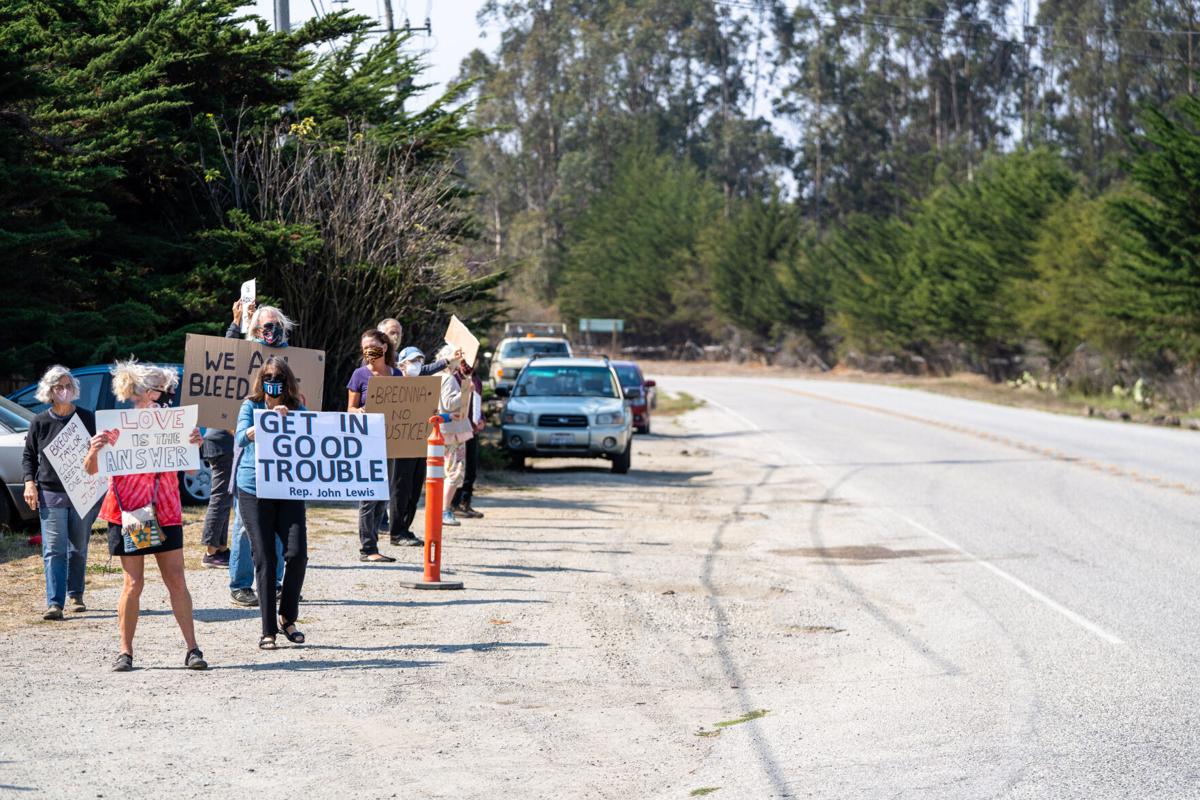 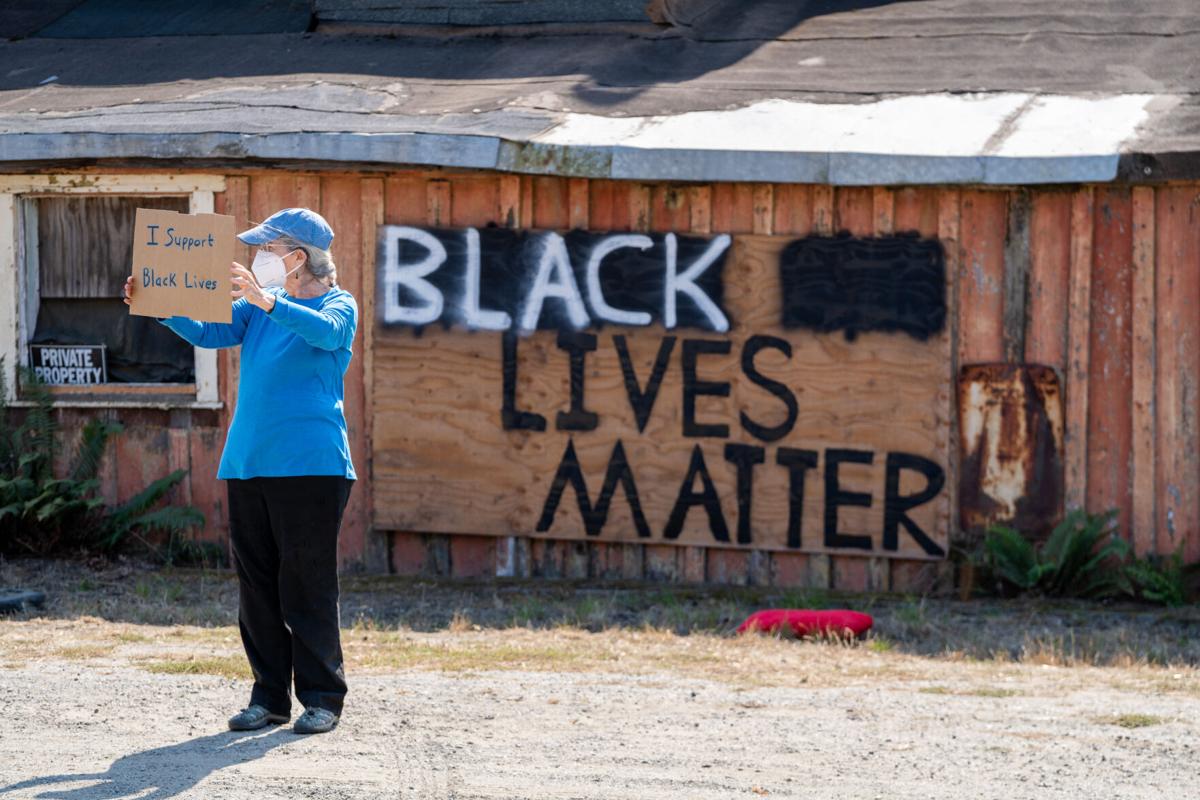 South Coast resident Pam Patek stands on the side of Highway 84 in San Gregorio in support of Black Lives Matter on Saturday, Oct. 3, 2020. Adam Pardee / Review 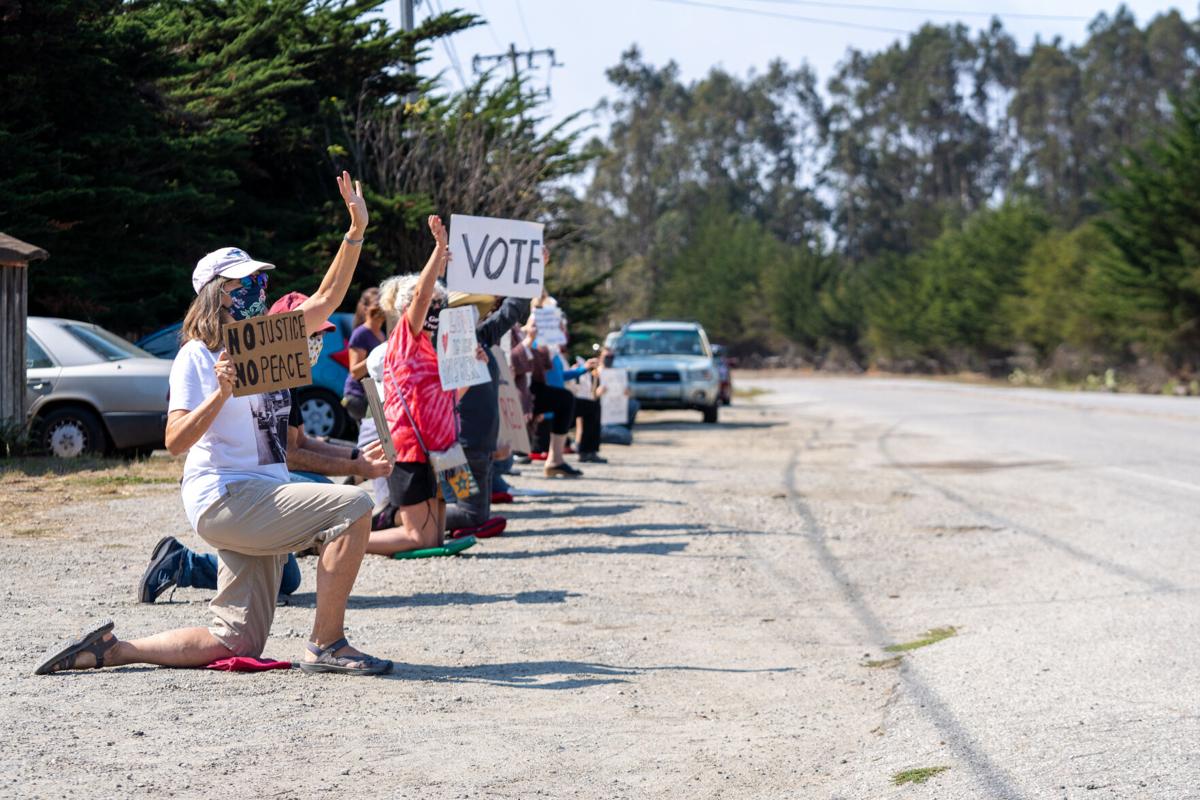 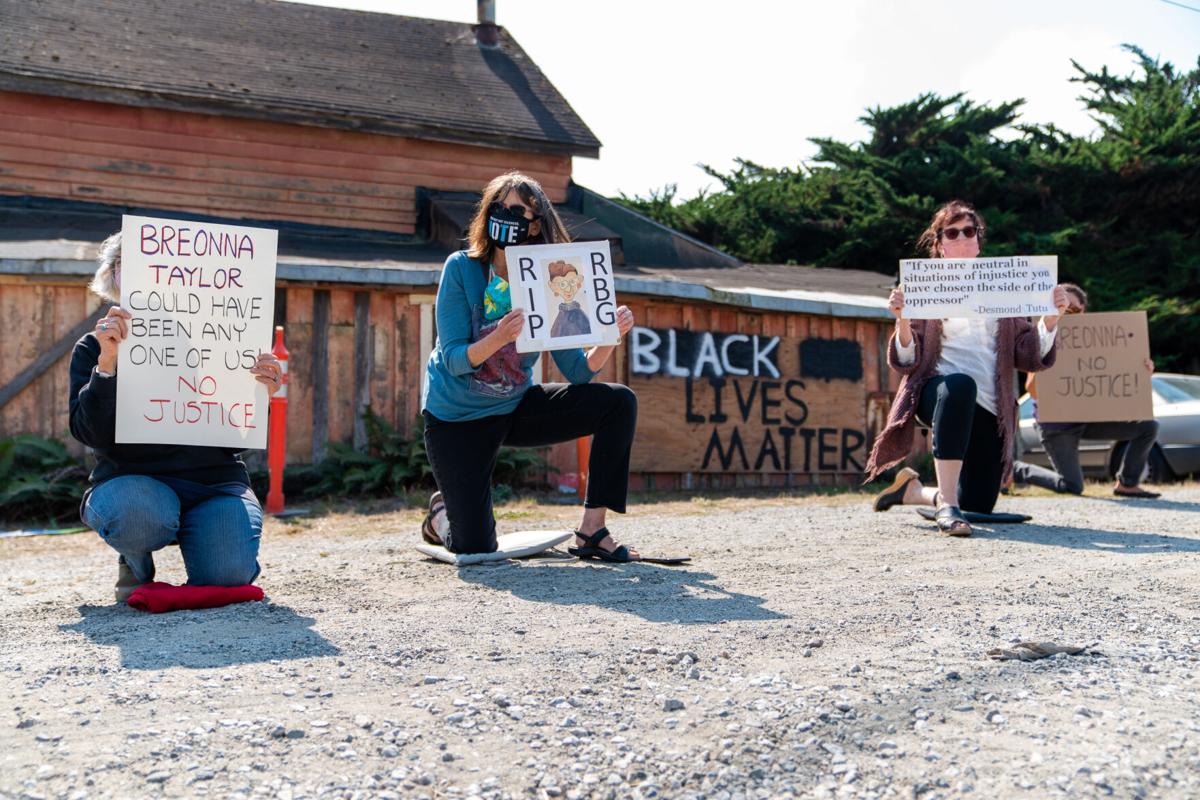 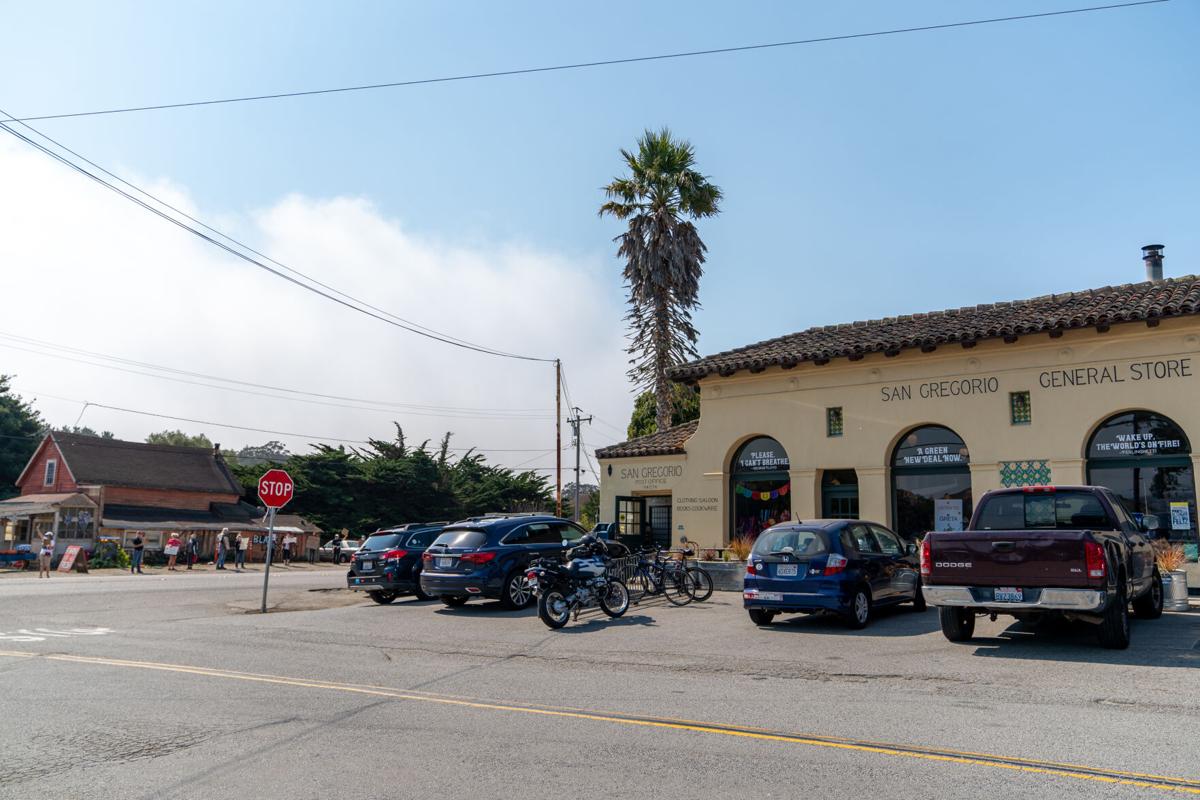 Participants of the Black Lives Matter protest in San Gregorio hold up signs as cars honk their horns in support on Saturday, Oct. 3, 2020. Adam Pardee / Review

South Coast resident Pam Patek stands on the side of Highway 84 in San Gregorio in support of Black Lives Matter on Saturday, Oct. 3, 2020. Adam Pardee / Review

After George Floyd was killed by police in Minnesota earlier this year, energy to combat racism gained momentum across the United States, including on the Coastside. But La Honda resident Pam Patek wanted to make sure a few marches over one summer wasn’t the end of it. So she began attending weekly protests in support of the Black Lives Matter movement organized by her South Coast neighbors.

On Saturday, Patek was among more than a dozen people who gathered across from the San Gregorio General Store at their weekly protest. They held signs for passing motorists and knelt for 8 minutes and 46 seconds in honor of George Floyd.

“A group of us decided after the killing that we needed to be out there,” Patek said. “La Honda can easily be ignored, but we’re trying to make our voices heard.”

The weekly protests rotate locations every week between Half Moon Bay, La Honda, San Gregorio and Skylonda and are scheduled for every Saturday until the Nov. 3 election.

Organizer Sue Henkin-Haas said the protests are driven by the death of Floyd, and, by continuing them weekly, participants hope to keep up the energy to fight for Black lives and signal their values as a community. The protests also strengthen their network and open doors for future collaboration, and the small gatherings held masked and outdoors are a safe way to speak out during a pandemic. She said the weekly kneeling has become a silent meditation and time for reflection.

“Watching someone get brutally murdered for 8 minutes, it was so painful for so many of us,” Henkin-Haas said. “This is not a protest that is one time or four times. This is something that has to be sustained. To have a real paradigm shift, to have a movement that is going to fix things, you have to have majority support. Every single person has to be out there supporting changes in the law.”

Local group La Honda Indivisible, which was born out of the 2016 election, is sponsoring the weekly protests. Organizer Lynette Vega said she founded the group in reaction to what she sees as a descent into fascism under President Donald Trump. The group has a wide scope, from social justice to election equality to environmental action. This year, they are focusing on getting out the vote by sending postcards and letters to voters across the country encouraging people to register and submit their ballots.

Vega said the group’s more than 100-person mailing list will continue to work toward justice and progressive causes long after the election.

“No matter who wins, there is still work that needs to be done, and we will keep going,” Vega said.

Although there may be few Black residents living in the South Coast community, Vega and Henkin-Haas said they think supporting the Black Lives Matter movement is their responsibility, and so is supporting immigrants and other people of color.

They said that sometimes they hear opposing views, mostly from people arguing that “all lives matter.”

Henkin-Haas said sitting on the sidelines isn’t an option for her. She sees the Black Lives Matter movement as a continuation of the civil rights movement. Raised in an Illinois town north of

Chicago, half her neighbors were Jewish, and some were even Holocaust survivors, she said.

“I promised myself that if I ever saw that level of white supremacy, I was at least going to step up and fight,” Henkin-Haas said. “It has lit a fire under me.”

For Patek, who said she can sometimes feel pessimistic about the world, protesting alongside her community is empowering.

“It's one way to stand up and say, ‘This is what I feel,’” Patek said. “To lend my voice to something, to be in a group that feels the same way, to know we’re not alone is very powerful.”

A message for the ignorant Mr. West: These women are all extraordinary community volunteers in a variety of capacities. And I’ll guarantee you that, while many of them are gardeners, none of them “have” gardeners.

They are supporting a concept, not a philosophy.

The terrorists who planned to abduct the governor of Michigan and hang her also sport American flags. I pledgee allegiance to that flag. So I must be a terrorist.

Even though I opposed the war in Iraq, I paid my taxes. Our President now says that war was stupid. Was I on the wrong side of history? Am I in the same group as Cheney and Hannity?

My step father is an avid and I mean profoundly avid Trump supporter. What do you think of people who say my mother's husband is a racist based solely on his support for Trump? Pretty stupid, no? Pretty childish, right? And I love the guy. So does that make me OK with Trumpers even though I detest Trump? Is one or the other?

It is so easy for Americans these days to accuse their fellow Americans of being horrible and supporting awfulness. The one lesson we seemed top have learned from Operation Iraqi Liberation is either you are with us or you are against us. And those who pass the us test are getting fewer every day.

The epitome of white privilege - standing next to a rural road is lily-white San Gregorio / Pescadero (the homeowners, not their gardeners...). Not like they have to work a second job to make ends meet during the pandemic - "let's go out and virtue signal!!"

Perhaps they could use their time to help the community? Volunteer?