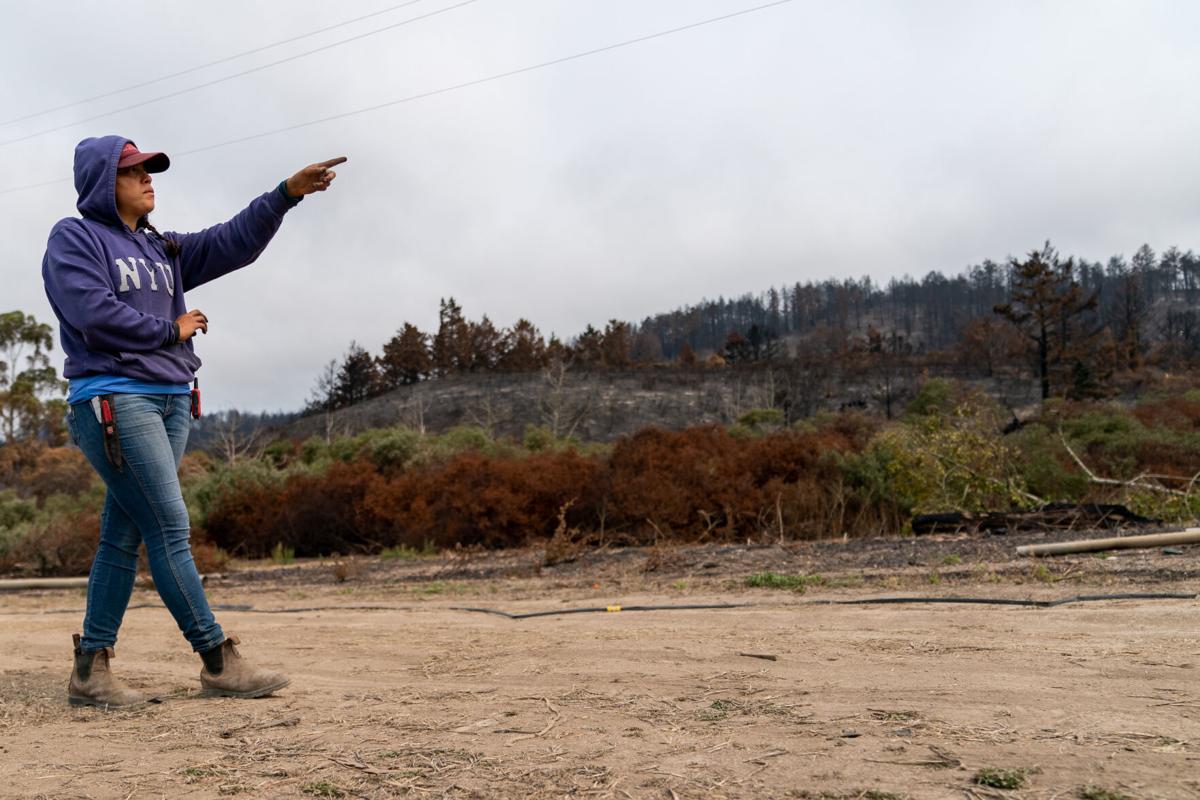 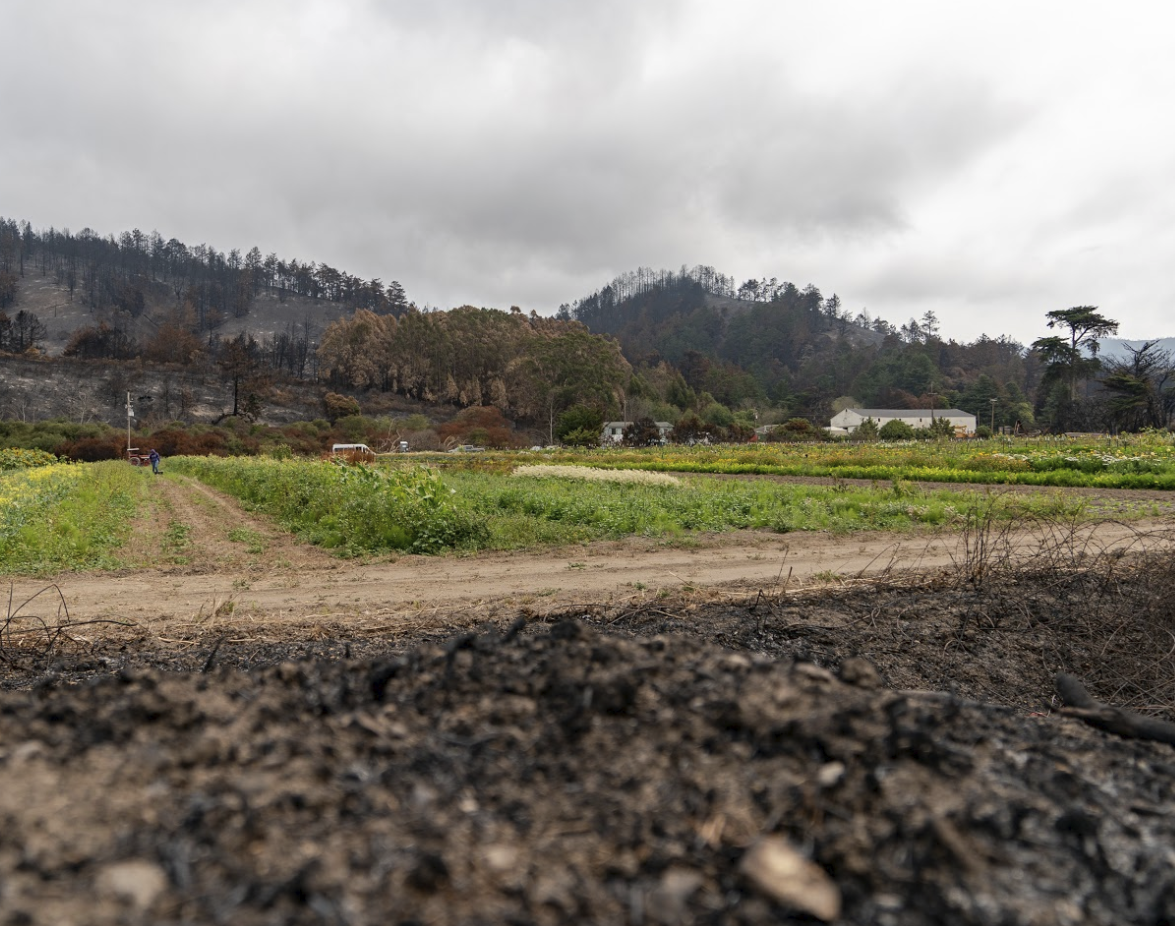 Those who stayed behind evacuation lines worked tirelessly to save land like the Brisa de Año Ranch near Pescadero. Adam Pardee / Review 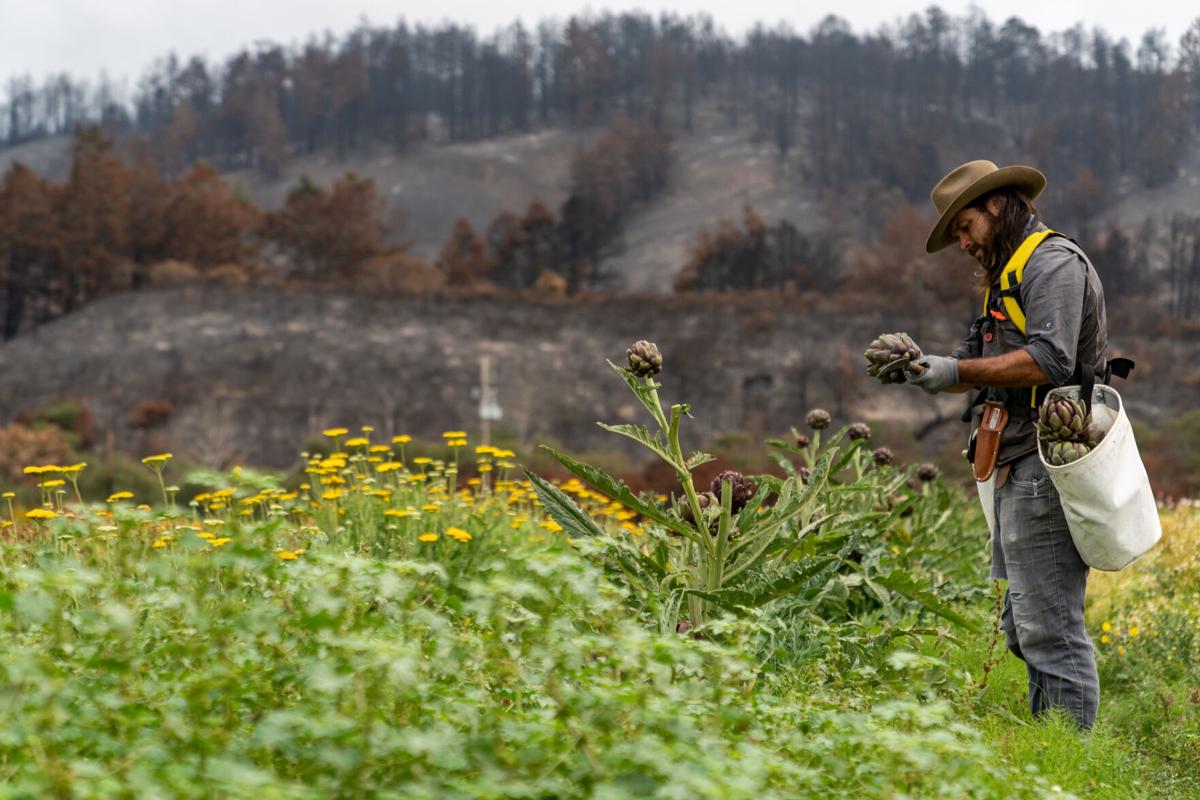 Co-owner and farmer Cole Mazariegos-Anastassiou picks artichokes in front of the hillside that burned during the CZU Lightning Complex fires in Pescadero on Tuesday, Sept. 1, 2020. Adam Pardee / Review

By the afternoon of Aug 19, Cole Mazariegos-Anastassiou knew the CZU Lightning Complex wildfire was going to reach his cooperatively owned farm, Brisa de Año Ranch. He also knew that — while the CalFire firefighters were doing everything they could to protect the land, there were not enough resources available.

And so he, along with what he estimated to be at least 300 other members of his community, decided to stay and work together with CalFire to protect their farms, homes and land.

“Officially, no one was supposed to be here,” Mazariegos-Anastassiou said. His farm and those of the community members around him were all within the limits of a mandatory evacuation zone. “(But) I can essentially guarantee that every home, farm, and ranch in the area near ours would be completely gone if it wasn’t for local farmers, ranchers, mechanics who protected them.”

Jered Lawson co-founder and co-director of educational and nonprofit farm Pie Ranch was among those who stayed. “It’s been an up and down feeling of ‘Yes we can do this’ to ‘Wow this is overwhelming’ and knowing that CalFire is doing all that they could with the limited resources they had,” Lawson said. “With their advice and their welcoming of us here, we collaborated on preventing the fire from taking more than it probably would have if we weren’t here.”

Lawson went on to explain how Pie Ranch lost its historic 1863 farmhouse overnight, causing Pie Ranch workers to realize the importance of staying in the evacuation zone and working with CalFire on clearing debris. Since firefighters had been dispersed to other hotspots in the area, Lawson said, “They just didn’t have all the chainsaws and the tools and equipment at their disposal.”

Both Lawson and Mazariegos-Anastassiou stressed CalFire was critical in helping to protect the area, and the importance of the cooperation they had with the firefighters. They understood the need for the mandatory evacuation zones and the necessity of not being in the way of emergency first responders, Lawson said.

And when they returned in the morning, Mazariegos-Anastassiou said their firebreaks had held, but “99-plus percent of everything outside of that perimeter was completely burnt to a crisp.”

Over the next three days, the fires “kept on coming back, over and over again,” he said.

Mazariegos-Anastassiou said they found themselves working hand in hand with CalFire, taking advice on where to build firebreaks, refilling fire engine tanks with their farm’s water supply, and advising firefighters of buildings that they might not have known about. “We’ve been appreciative of them and they’ve been appreciative of us. We’ve never heard from any CalFire people, you guys can’t be here,” Mazariegos-Anastassiou said.

The problem with remaining in a mandatory evacuation zone, Mazariegos-Anastassiou said, is that once you leave, you’re not allowed to return. That made getting produce from farms to market difficult as well as bringing essentials like food and water into the community. “We’re having to collaborate to get food to each other and water and basic supplies,” he said.

Officials were essentially telling them that “If you’re in the evacuation zone and you’re outside of your home, then you’ll be arrested,” Mazariegos-Anastassiou said. He detailed an evening when he journeyed to Pie Ranch to investigate a plume of smoke and, mistaken for a looter, was threatened with arrest.

“We’ve been kind of feeling like we have to be criminals to be here,” he said, mentioning people who have snuck over the evacuation line to bring in supplies. Others were stuck in their houses without running water or sufficient food. Some were afraid to leave the evacuation zone due to complexities with immigration statuses. Still others were struggling to find appropriate parts for broken equipment necessary for fire protection including tractors and irrigation systems. Mazariegos-Anastassiou called it a community effort.

“I get they want everybody to evacuate and I think there’s a lot of reasons that makes sense especially if they had the resources to fight the fires. But I think what’s tricky now is that’s not the reality of the situation and having the roadblocks as they’ve had it has made the situation more dangerous,” Mazariegos-Anastassiou said. “It feels like they’re running on paper instead of reality.”

Aug 25 was the first day “we really felt calm” Mazariegos-Anastassiou said. And since then, “It’s been a lot of putting things back together,” he said.

Aug 31, was finally a day off the farm for Gaby Lee, owner of Lunaria Farm. She hadn’t had a hot shower in a week, and just this past Friday was approved to go in and out of the evacuation zone by virtue of a pass system established through the San Mateo County Agricultural Commissioner.

“Just knowing we can move a little bit has helped so much,” Lee said. “Especially for doing deliveries, our field was full, there was so much food, and for me flowers.”

However, she also mentioned flaws to the pass system, with friends whose names were supposed to be on the list missing. She blamed a lack of communication between San Mateo County and Santa Cruz County, on the other side of the evacuation zone, in addition to a lack of clarity on how often the list of names is updated.

While not completely new to the Pescadero area, this year is Lee’s first year with her farm, which grows both ornamental and medicinal flowers. She called the last few weeks “a reconnecting process” with the community around her. “This week has been really special in a lot of ways,” she said. Because of the evacuation orders, the normally busy highway 1 was quiet and trafficless. “To know people here right now are our community members: that has been really cool to see our community getting so much closer,” she said.

August is typically a peak season for farmers, but Lee mentioned the time the fires have given her and Mazariegos-Anastassiou and the rest of Brisa de Año Ranch to have meals together, to process the events of the past few weeks, and to make strategic plans for the future.

“The whole thing, having our community show up, has been so amazing,” Lee said. She launched a crowdsourcing effort for her farm and was able to meet her goal of $20,000 in just five days.

“Now I think we’ve turned the corner. It’s really sort of now assessing what we can bring back online for operations. We’ve got a lot of food in the fields,” Lawson, of Pie Ranch, said. He explained a link Pie Ranch was able to create with food truck company Off the Grid, through which partnering food trucks agreed to buy all of the farm’s available produce and transfer that into emergency meals for evacuees and meals to bring back into the Pescadero community.

Looking ahead, Lawson sees an opportunity to avoid future destruction caused by wildfires. “We’ve been collaborating with the Amah Mutsun Land Trust,” he said. “Their ancestral knowledge of fire and use of fire and also in landscape stewardship: we have this opportunity now to really center their leadership in planning how we go forward.”