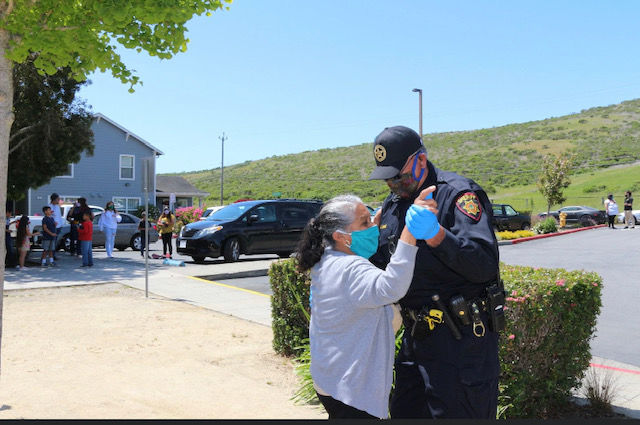 San Mateo County Sheriff's deputies participated in a Mother's Day event on the Coastside that did not adhere to standing public health guidelines. Photo courtesy Facebook 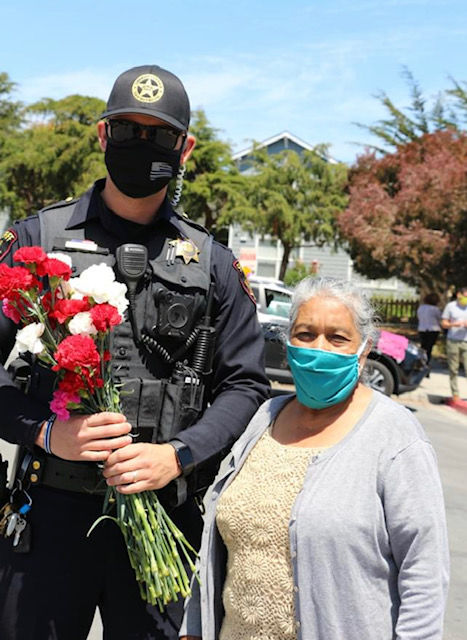 San Mateo County Sheriff's deputies participated in a Mother's Day event on the Coastside that did not adhere to standing public health guidelines. Photo courtesy Facebook

Deputies participated in events on Sunday at Main Street Housing and Moonridge as well as a location over the hill. They were there under the auspices of the Sheriff’s Activities League, which posted photos and videos on social media. Bolanos said deputies handed out flowers to mothers and were there to build upon important relationships in diverse communities.

“It was a great idea,” he said, “but they went too far. Clearly, they were not following social distancing recommendations.

“I’m going to remind my personnel of those recommendations,” he said after the photos were brought to his attention.

Sheriff’s deputies are on the front lines of efforts to enforce county rules designed to limit the spread of the coronavirus. The U.S. Centers for Disease Control and Prevention as well as state and local health officials say everyone should maintain six feet of distance from others who are not in their own household. On the coast, many — including Half Moon Bay City Councilmembers — have argued that deputies should take a more aggressive approach to enforcing the stay-at-home and social distancing rules.

Those rules are particularly important for older people who are at elevated risk due to the virus. In the video, at least two deputies can be seen dancing and touching women who appear to be in the age range of particular concern.

Sunday’s event was a partnership between the Sheriff’s Activities League, which participates in many community events as a way to build trust and rapport, and Ayudando Latinos A Soñar. ALAS works with the Coastside Latino community in a number of ways, including to provide face masks and food during the pandemic. The event included a mariachi band that drew a crowd at one Coastside stop.

Bolanos said he appreciated the spirit of Sunday’s events but that deputies had to be cognizant of the rules they also have to enforce. He said he was sure the vast majority of his staff takes the rules seriously.

I had an experience Tuesday with 2 unmasked deputies standing in front of the door of a restaurant on Main Street. When I approached the door with my mask on they did nothing to allow me to enter with 6' distance. I was uncomfortable asking them to move, but very concerned at their behavior. They stayed there talking to each other until their food came out. SMH

As in any art, "interpretation" is in the eye of the beholder.

(1) It is possible that the woman and the Deputy in the photo are members of the same household? If so, then there is no restriction on distancing.

(2) Perhaps the woman asked the Deputy to dance and he accepted the request because he did not want to decline her request and be accused of being a racist.

(3) Notice that no one has made a single comment about the group of people gathered in the shade under the tree who appear to be closer than 6 feet apart and some appear to be without masks. Why no interest in that part of the photo? I know why. . . .law enforcement is not a protected class and is an easy target for real or imagined abuse.

Exploiting families of color for PR content is unacceptable. Going forward I hope the SMCSO will serve the public with care and respect and this includes following social distancing requirements to protect public health.

"Exploiting families of color for PR content is unacceptable."

You are absolutely right, so stop doing it! You are not of a race of color, PLEASE, stop making comments about a Mother's day celebration into a racial one!! Wold you have made the same comment if the lady was white? Geez, get off your broken soap box!! This may have violated social distance rules, but it was done with masks, gloves and love.

Thank you officers for your efforts ♡♡♡

Many of us are capable of empathy regardless of the color of our skin. Calling attention to exploitation is a form of advocacy.

I happened to be around at the Main Street stop this passed Sunday, and the article failed to mention that the nice people working were also handing out masks to those who didn't have one. I think this was a nice gesture from the Sheriff Office to celebrate Mother's Day, and that was evident from what I saw. The community was lit up with happiness, something we all needed during these difficult and unprecedented times. I believe this article is very negative, and doesn't give enough credit to the SO for doing this for the community.

open. It’s been the biggest complaint in all this mess. This is how close your stylist will be to you btw . He’s wearing a mask AND gloves like hairstylist have to , she’s wearing a mask just like our clients have to do so just remember that when you run to the hair salon .

I love this photo.

After two months of being forced to be the public face for the flu response, I am willing to cut Sheriff B. and his staff a break. This was needed non-flu interaction with the community.

I completely agree. They have been working extremely hard to ensure the safety of our community, and this was done with the purpose of bringing positivity to the hardworking mother's.

Saw three deputies hanging out in Woodside. Not Social distance. No masks. Saw it two hours ago.

Why always Main Street Park and Moonridge? With the current shelter in place, i'm sure alot of mother's would've appreciated flowers, food and Mariachi music

as well. We are Mother's as well and would like to be recognized by our local deputies as well but seems like all the attention goes to the housing developments mentioned above. Just wondering why.