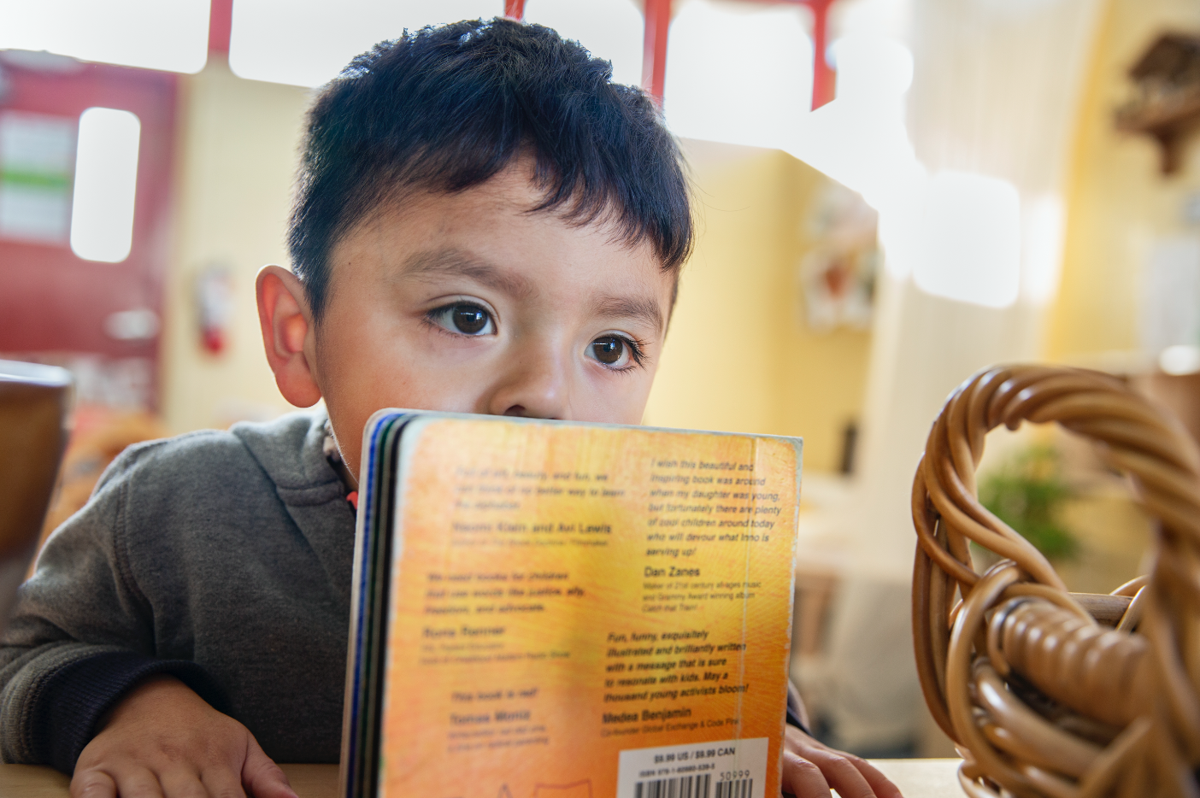 Ronaldo Rodriguez watches his classmates play during a recent session at Sueños Unidos or, in English, United Dreams. Kyle Ludowitz/Review 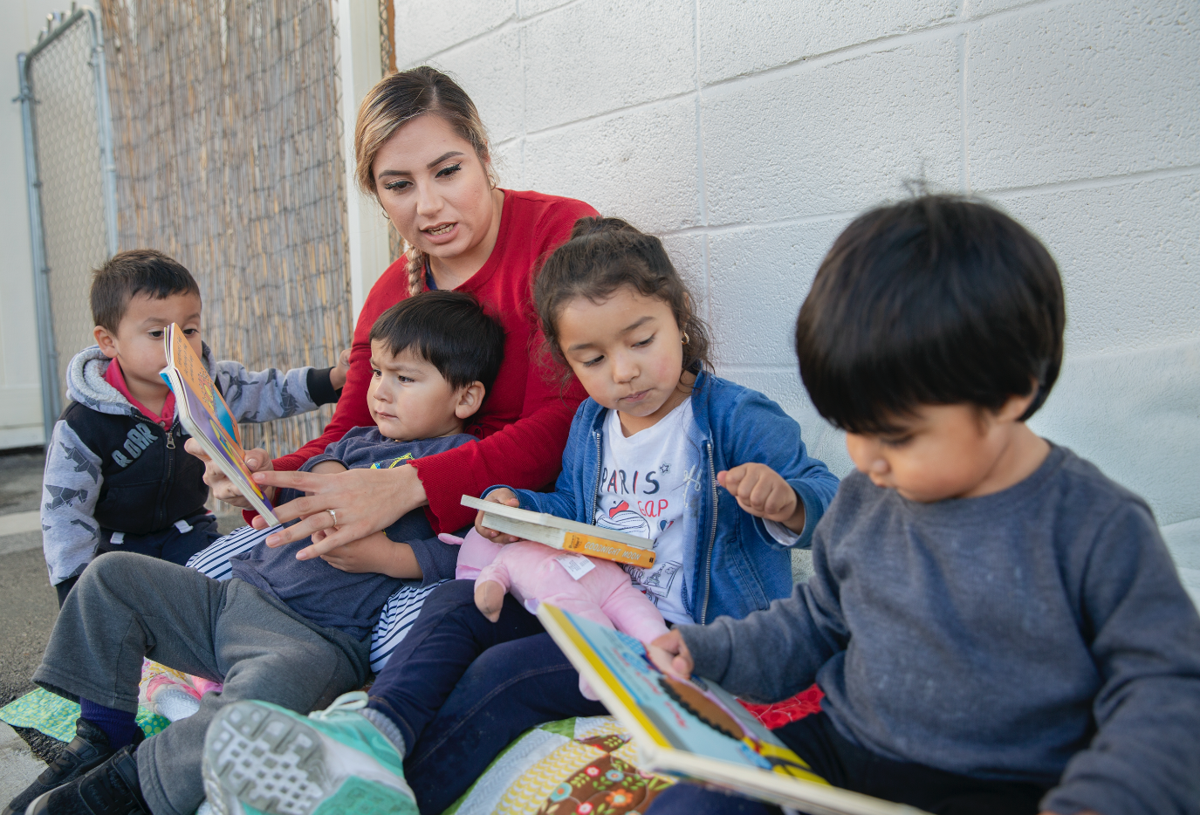 Jennifer Mercado reads to a group of children during a recent session at United Dreams. Kyle Ludowitz/Review 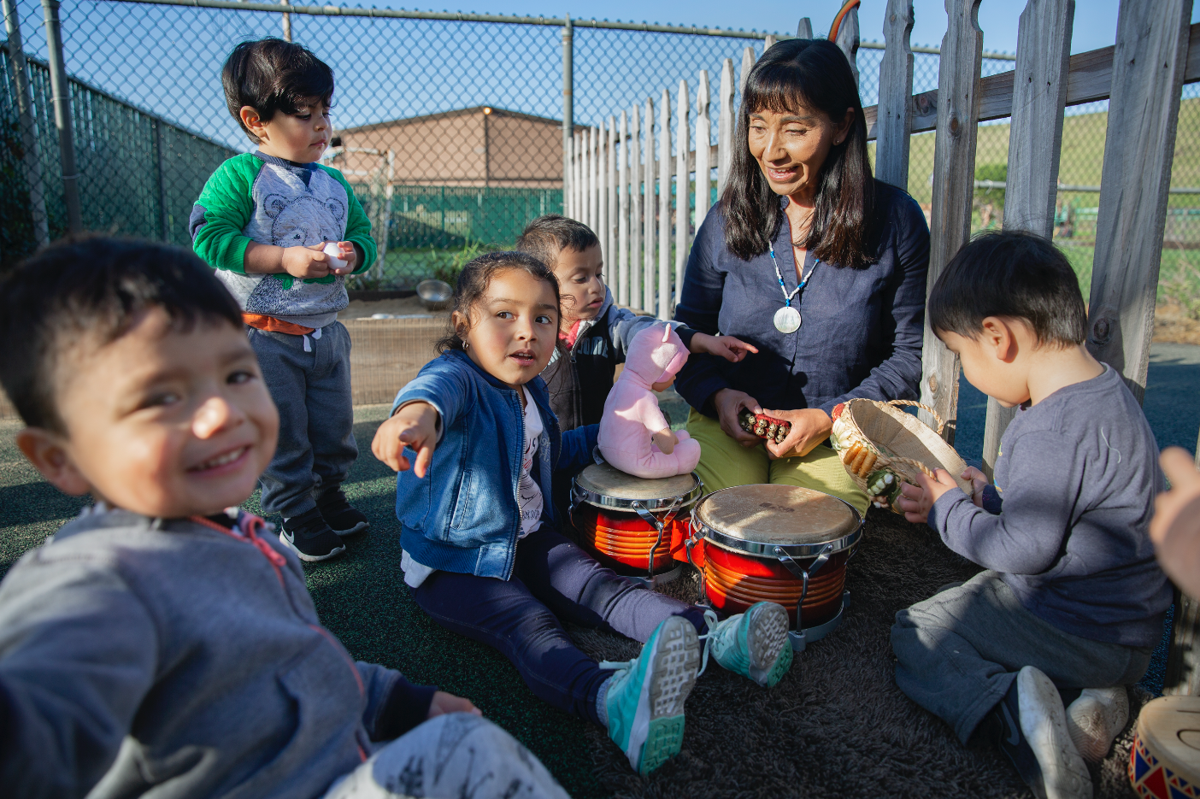 Ronaldo Rodriguez watches his classmates play during a recent session at Sueños Unidos or, in English, United Dreams. Kyle Ludowitz/Review

Jennifer Mercado reads to a group of children during a recent session at United Dreams. Kyle Ludowitz/Review

Elvia Morales shepherds the toddlers gathered around her with quiet confidence. As a few stragglers dart around the playground, Morales sings gently in Spanish while her students croon along, their tiny hands bouncing up and down on a pair of bongo drums to keep the tempo.

“OK, now your turn to play and sing,” she tells a child in the circle, quickly pivoting to English before returning to Spanish for the rest of the song.

“Some of our children are dealing with delayed language (skills),” said Morales. “And we do give referrals for speech therapy.” She went on to say the mother of one student told her her child can now talk because of experiencing the children and language around this class.

Morales is the lead teacher for Sueños Unidos (or United Dreams, in English), Puente de la Costa Sur’s bilingual child-parent cooperative preschool. The pilot program, which launched in late 2016, serves eight children ranging in age from 18 to 36 months — and their families.

For five days a week, the kids participating in Sueños Unidos play, sing, shout, read and learn English and Spanish under the tutelage of Puente’s teachers.

The co-op marks a major milestone for daycare along the South Coast, which has no consistent, licensed childcare facility.

“We are literally helping babies’ brains to grow in this program,” said Arlae Alston, Puente’s family engagement project manager. “All of the research about trauma and attachment has shown that the most important thing for children is to have secure, safe relationships.

“The social-emotional part (of learning) is the most important piece that a child can have,” she continued. “If a child feels safe, the cortisol level will go down and their brain can actually do what we want them to do: learn.”

Back at Puente’s childcare center, Morales walks past a rack of picture books with titles like “It’s Okay to Be Different” and “Hairs / Pelitos,” a story that blends English and Spanish. In another corner, neat boxes of pine cones and smooth stones are stacked for the children to play with. A shelf on one wall depicts a Nativity scene alongside several family photos, which Morales says is reserved for families to share meaningful items on a rotating basis.

“They learn everything through play. And they sign (their names), too. We honor the scribbles in this stage of writing. It’s the beginning of literacy.”

The co-op also depends on the support of family members like Christine Guzman, the grandmother of one of the children. Along with other members of the co-op’s committee of local parents, they take turns volunteering as teacher’s aides while the program is in session, from 8 a.m. to 3 p.m.

“These two teachers honor these children,” said Guzman. “They really respect them. They work with them, and when the kids don’t want to do things, they’re firm, but they have patience. It’s exceptional.”

While the co-op is free for families, Alston said that the program is one of Puente’s most expensive. Despite an initial influx of support through foundations like First 5 San Mateo and various private donors, she said that Puente staff is “constantly” fundraising for Sueños Unidos.

“Parent co-ops are mainly for upper middle-class people that can afford to have one parent work and the other stay at home,” said Alston. “And ours is different in that way, because all of our parents are low income — that’s one of the program requirements.”

Alston said that during the pilot program’s formative days, some parents had to adjust to the idea of introducing babies and toddlers to an academic setting at such an early age.

“Now, we have 20 children on our waiting list,” said Alston.

“And parents really have been the biggest outreach for our program, just through word of mouth and talking about it.”

Alston said that Puente is working to expand Sueños Unidos from eight to 12 children. Recently, the nonprofit hired an architect to develop blueprints for remodeling Puente’s childcare center to accommodate more kids.

“This program is what it is because of the parents and their participation and commitment,” said Alston. “One of the moms built our sandbox; one of the dads built the playhouse outside; a neighbor donated the tables that we have. It’s really a community program.

“It’s true, it takes a village to raise a child,” she continued. “And this village has shown up for the children.”