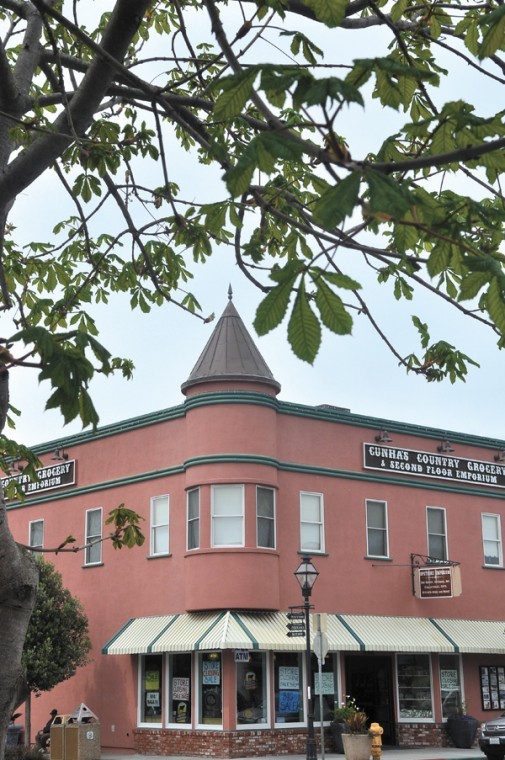 The doors of Cunha’s Country Grocery are expected to open once more on Friday. A family with a long history in the business has signed a lease to operate on Main Street. Review file photo 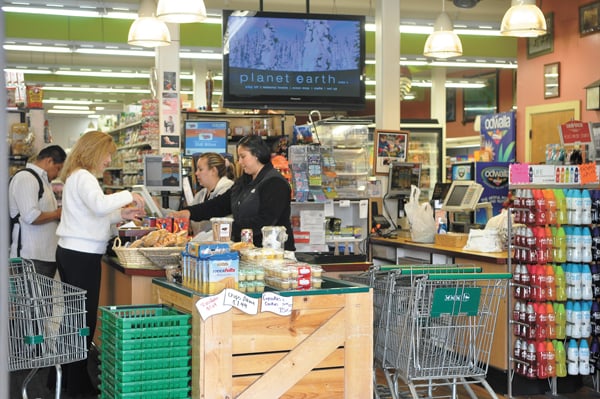 Despite reporting poor business over the last couple of years, there are still times when lines form at Cunha’s cash register. Regulars say they will miss the courteous staff at the neighborhood store. 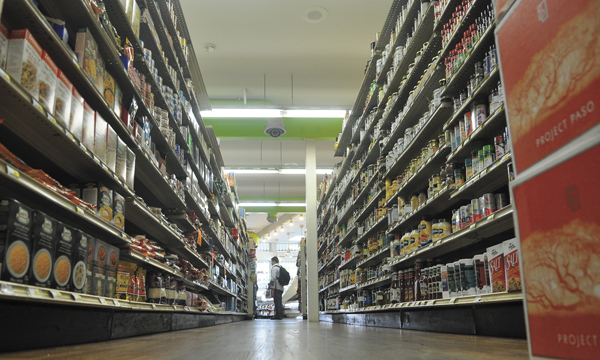 The shelves at Cunha’s Country Grocery are known to include an eclectic inventory. Soon they will be empty.

The doors of Cunha’s Country Grocery are expected to open once more on Friday. A family with a long history in the business has signed a lease to operate on Main Street. Review file photo

Despite reporting poor business over the last couple of years, there are still times when lines form at Cunha’s cash register. Regulars say they will miss the courteous staff at the neighborhood store.

The shelves at Cunha’s Country Grocery are known to include an eclectic inventory. Soon they will be empty.

The aisles of Cunha’s Country Grocery were bustling with customers on Thursday afternoon, but the business was too little, too late to save the 85-year-old Main Street icon.

Like a funeral procession, locals streamed through the checkout line to pay respects to the employees as they rang up what could be their final purchases. Citing about two years of lagging business, the owners of Cuhna’s Country Grocery announced on Thursday they would close down the Half Moon Bay landmark in the coming weeks.

The surge of customers and sympathy was a nice gesture, said longtime clerk Ana Contreras, who said some of the sympathy seemed hollow after years when it felt to her many in the community had turned away from Cunha’s.

“Everyone comes in saying, ‘We’re sad to see you go,’” she said. “Well, we’re sadder … If some of these people shopped here, maybe the store wouldn’t be closing.

“Being the nice store on the corner, that’s not enough to survive anymore,” she said, reconsidering her words.

Operating for decades as the city’s local grocery, Cunha’s was a popular destination both for locals and tourists in the city’s downtown core.

Not so long ago, community support for Cunha’s was obvious. Locals rallied around the business in 2003, helping to rebuild it after fire roared through the building.

But the current owners of the property, Franco Carrubba and family, say the business has been struggling for years to compete for customers against Safeway and New Leaf Community Market, two grocery chains with larger inventory and more resources. Speaking for his family, Giuseppe Carrubba said the decision to close was necessary in order to save the family’s other businesses. The family has been embroiled in Chapter 11 bankruptcy proceedings since 2009. The family also owns the San Benito House and a section of the Shoreline Station, both in Half Moon Bay. Carrubba said those businesses would remain open.

“It’s a sad thing to do on a personal level, but on the business level, it’s the best thing my family could do,” he said. “We tried to keep it open because it’s a Half Moon Bay landmark, but there’s only so many months and so many years that we can keep losing money.”

No closing date has been set, but Carrubba indicated it could be within the next month. The family now intends to lease or sell the building to pay the remaining mortgage.

Operating Cunha’s Country Grocery has not been easy for the Carrubba family. It purchased the landmark Half Moon Bay business for more than $5 million from Bev Ashcraft in 2007. A year later, Franco Carrubba threatened legal action against Ashcraft, saying she broke a provision of their contract by working for rival New Leaf Community Markets. At the time, Carrubba accused Ashcraft of trying to destroy his business.

In 2009, Carrubba briefly listed the 80-year-old grocery for sale. At the time, he denied the business was really for sale, and his real estate agent said Carrubba was merely looking for investors to help cover costs.

Later that year, Carrubba filed for Chapter 11 bankruptcy protection, and creditors who were owed more than $1.5 million went to court seeking to foreclose on and auction off Carrubba’s Half Moon Bay properties. At that time, bankruptcy documents provided a list of his debts, including a $748,250 promissory note to the United American Bank of Half Moon Bay and more than $200,000 in credit-card debt spread over 10 accounts.

In 2010, court documents revealed that Wells Fargo and East West banks were owed $9.8 million — an amount bank attorneys said exceeded the $7.7 million worth of Carrubba’s commercial holdings in Half Moon Bay. Carrubba said the bankruptcy claims were severely understating the value of the family’s property.

The effects of the bankruptcy at Cunha’s became clear, with a small cadre of employees being asked to handle multiple jobs. Butcher Jason Farbakhsh was hired after leaving Andronico’s Market, another Bay Area market that was forced into bankruptcy. He recalled taking on more and more duties at Cunha’s, including ordering supplies, cleaning and marketing. Through it all, he prided himself on having the best-stocked meat selection on the coast, even though it didn’t always draw customers.

“You can only lead a horse to water; you can’t make him drink,” he said.

Clay Lambert contributed to this story.

A recent timeline of Cunha’s Grocery

2003: A six-alarm fire raged through the building at Kelly Avenue and Main Street. Hundreds of Coastsiders gaped at the spectacle as more than a dozen fire trucks and a hundred emergency responders battled the blaze.

2004: A year after the devastating fire, Cunha’s re-opened. Longtime proprietor Bev Ashcraft Cunha was once again behind the cash register.

2009: The building was briefly listed for sale, but, at the time, Carrubba denied he was selling the business. His real estate agent said the listing was “premature.”

2012: Unable to weather the economic downturn and increasing competition in the grocery business, the Carrubba family says it is closing the iconic store it has owned for five years.

News that the Cunha’s Country Grocery will be closing came like a death in the family for downtown Half Moon Bay.

You know what's the worst thing about facilities and icons like this shutting down because they are unable to get the patronage they need to remain sustainable? It's happened in Adelaide and the minute they announced they were shutting down the store unit, everyone started flocking to them but the solution was a little too late and we lost a very valuable historic business in our town.

There are a lot of businesses these days that are packing up their things into storage boxes and selling away all of their equipment and tools. People are just moving to online shopping solutions rather than spending money in physical shops these days. Mom and Pop shops suffer the most and just like this one, people realise it all too late...

Friendlier help? I have always been treated well there. The butcher is great guy who cracks jokes and laughs at mine. He is a young man with a couple of kids. I hope it works out well for him and his family.

My roast beef on rye has always been put together with a smile and per my order. The cashiers have always been courteous and helpful. I am not sure why anybody would go upper case on a bunch of 20 somethings trying to get by on what a grocery store pays but my standards are low end blue collar. Trailer trash such as I are probably what has ruined this town.

There is a great deal of time wasted between a few no nothings who have a lot to say lttle about this wonderful coast.

How many leases around here have your name on them? How many paychecks have you signed? How many people like the young man with a couple kids who was the butcher have you hired?

Your pompous and self righteously schtick is entertaining I admit. It reminds of the wisdom that POFTIDES used to share with us.

One of the people who was looking to invest spoke of a NY style deli and market AND with friendlier help than the closing market.

I am not an educated man. Public K-12 so what do I know? Sill I am guessing that your grammar is either that of a person who speaks English as a second language, which is to be commended, or learned in a public institution. Which ever, your argumentative skills can still be enhanced. It is not too late.

Start out by trying to say something.

As I hoped, the investors who I contacted in re: to making this wonderful location work in today's world, obviously have heeded my recommendations.
Their ideas are revolutionary in the simplest of ways and had to go through a lot of double talk with the San Mateo County who did not cooperate freely from what I understood.
Most of the locals on Main Street and almost every coffee shop left standing on the coast, had some sort of gripe with the County and representatives, and the details will be written in a column in San Mateo and Bay Area papers.
There are a lot of jokesters who use this REVIEW unwisely. I can see the reason for lack of progress and interest from these locals.
There is a great deal of time wasted between a few no nothings who have a lot to say lttle about this wonderful coast. Interviewees dismiss them.
One of the people who was looking to invest spoke of a NY style deli and market AND with friendlier help than the closing market.