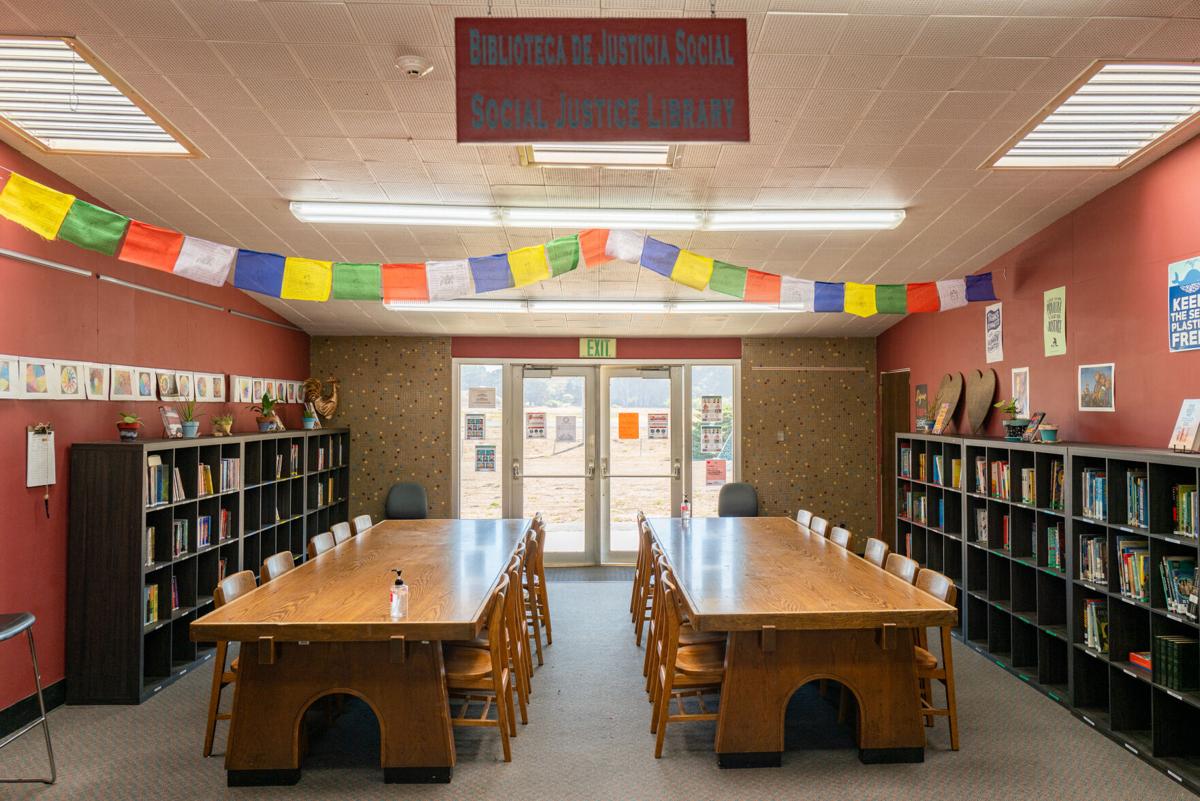 A new social justice library at Pescadero Middle and High School aims to center marginalized voices. Some worry about what happens to the “classic” voices as a result. Adam Pardee / Review 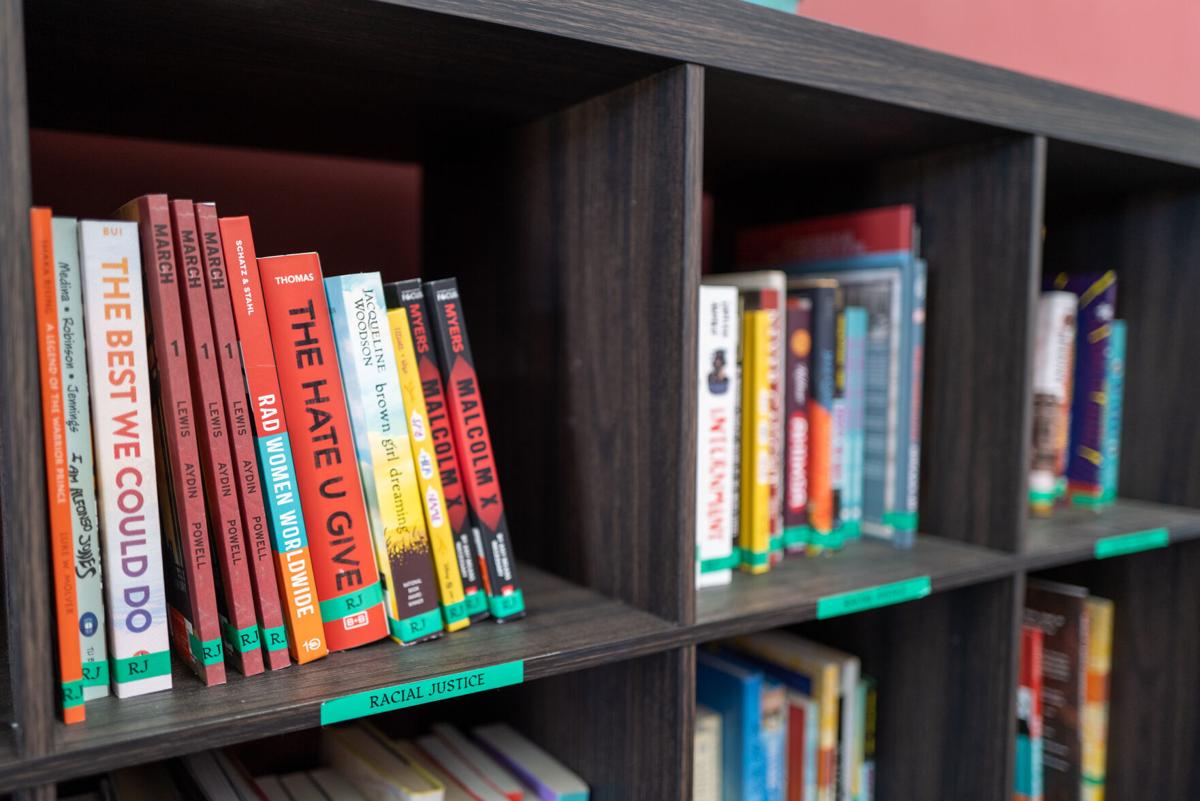 A collection of books in the racial justice section of the social justice library at Pescadero High School in Pescadero. Adam Pardee / Review

A new social justice library that is focused on highlighting marginalized voices is up and running at Pescadero Middle and High School. But not everyone in the school community felt included in the process, and some worry that removing old titles is a form of censorship.

The idea came from teacher Kassi Talbot, who heard about the concept of a social justice library at a meeting as part of an advocacy group known as Showing Up For Racial Justice. She teamed up with teacher Melissa Morris to jumpstart the project in the spring of 2020, hoping that it would be open by the time students returned in the fall. Due to the COVID-19 pandemic, campus remained closed to students for another year, so the pair began bringing students to the table virtually to help design the space and choose the titles.

Now, the initiative has a mission, developed at a recent semi-monthly meeting where all staff and students are invited to help direct the future of the library. That mission is to create a space that centers marginalized communities and voices across identities, fosters curiosity and wonder in literature and excludes texts that are historically racist or discriminatory.

Talbot, who attended Pescadero High School, said the school’s collection had gone effectively unchanged since she browsed the shelves as a student a few decades prior. She said few students actually used the resources. The pair thought the new library could be an asset for students who often don’t see themselves represented in media and to create a physical space that is inclusive.

“We want to have mirror texts in front of our students, and not window texts,” Talbot said.

Without a local public library or a full-time school librarian and with the county’s mobile library no longer visiting the South Coast, Pescadero’s students have few ways to access library resources. That’s why, when Talbot and Morris approached the Half Moon Bay Library for resources to build their social justice library, library staff was more than willing to support them, said Dolly Goyal, San Mateo County Library Services Manager for Youth and Family Services. The library ultimately provided a list of social justice-oriented books for the teachers and students to choose from and donated the 700 titles they selected from an internal budget that’s dedicated to donations.

The shelves are categorized by topic, containing books chosen by students, staff and on-campus clubs that are interested in themes like environmentalism or that center Latino or LGBTQ voices. Student art also hangs in the space.

But the idea isn’t popular with all members of the Pescadero school’s staff. Two teachers, who declined to be named for this article, said they thought the process of creating the social justice library was not transparent. They said the removal of the old books felt like censoring important titles, and that not enough voices were included in the decision-making process.

Now, the group plans to reinstall a portion of the old books, selected by a group of students and teachers who are in favor of preserving them, in an adjacent Reading Library space. Any of the old titles that meet the social justice library’s mission will go in that new section.

“I’m still of the mindset that I don't know why we have to have two separate libraries,” said one teacher. “That’s bizarre.”

Goyal said it’s part of the librarians’ job to create and maintain book lists, including that focus on inclusion, diversity and centering underrepresented characters or authors. She said public libraries are constantly reevaluating their own collections. Even the classics get a second look in the hopes of finding similar stories with more relevant and resonant characters for today’s audiences.

“In the library community, it’s something we’re always talking about and being mindful of books that might not be as relevant to our communities,” Goyal said.

Talbot said she takes issue with the censorship claims because the books the new library offers contain the voices and perspectives of historically censored people. And with texts considered “classics” still a fundamental part of curricula and testing, many of the removed books still have a home in students’ education.

“Would we be having the same reaction as a staff if this wasn’t labeled a social justice library?” Talbot said. “When we say censorship, these voices have already been historically censored for hundreds of years. Who decides what a classic is?”

Morris and Talbot said they should have been more thoughtful about where to place the old books and more transparent about their process. Pescadero Middle and High School Principal Phil Hophan agreed. He said it was only his eighth day on the job when Morris and Talbot approached him about creating the new library, and he supported it. Hophan said it’s now his job to make sure there is dedicated space for both sections of the library to carry physical books. But ultimately, he wants to see students’ interests drive their contents.

Now, Morris and Talbot said their priority is for the library to be student-led, both in cultural use of the space and books, and in guiding the contents on the shelves. The teachers who remain concerned about the social justice library say they have attended the new library meetings and voiced their worries. They both said they’re willing to be part of the process and to advocate that books are not removed without full transparency and conversation among the school community.

“It's not just about the changing library,” the teacher said. “It's about somebody deciding what you can and can’t read. That’s what's so dangerous.”

Interesting that I read this article the same day as Ray Bradbury's 1979 afterward to Fahrenheit 451:

"There is more than one way to burn a book. And the world is full of people run­ning about with lit matches. Every minority, be it Baptist / Unitarian, Irish / Italian / Octogenarian / Zen Buddhist, Zionist/Seventh-day Adventist, Women's Lib/ Republican, Mattachine/ Four Square Gospel feels it has the will, the right, the duty to douse the kerosene, light the fuse...

For it is a mad world and it will get madder if we allow the minorities, be they dwarf or giant, orangu­tan or dolphin, nuclear-head or water-conversation­ist, pro-computerologist or Neo-Luddite, simpleton or sage, to interfere with aesthetics. The real world is the playing ground for each and every group, to make or unmake laws. But the tip of the nose of my book or stories or poems is where their rights end and my territorial imperatives begin, run and rule. If Mor­mons do not like my plays, let them write their own. If the Irish hate my Dublin stories, let them rent type-writers. If teachers and grammar school editors find my jawbreaker sentences shatter their mushmilk teeth, let them eat stale cake dunked in weak tea of their own ungodly manufacture."

As the old saying goes, "variety is the spice..." however saying the selection of reading material is driven by the students is false. Students mimic what their teachers say they should know and read. That's pretty much the extent of their knowledge until they're more mature. It's a false premise. Kassi this is a form of censorship regardless of what you and your fellow teacher espouse. Also, you might look in a mirror and realize at your young age mistakes are bound to happen and have. This is a flawed idea and shame on your principal you knows sadly very little about this community other than what he is programmed to. Might suggest he step out of his limited world and get into the community.

We are ALL influenced by what we learn from our leaders, parents, peers, and media choices. That's why we are so lucky to have teachers like Kassi and Melissa that create avenues for our students to hear all viewpoints -- and not just one. It takes a lot of courage and vulnerability to explore racism, inequity, and unconscious bias. It takes even more courage to explore it in ourselves. Kassi, as you pursue your PhD in Education Administration with an emphasis in social justice, it is clear your age does not define your expertise here, but should instead be appreciated and respected. I also applaud your willingness to listen to the feedback from others, reflect on their point of view, and admit you could have done better. You are a role model of both courage and learning agility.

Censorship is censorship no matter how you want to disguise it.

A teacher’s pursuit of an upper degree is irrelevant to the discussion.

I trust that the principal will do right by making sure all students and all teachers opinions are valued in selecting materials for the library.