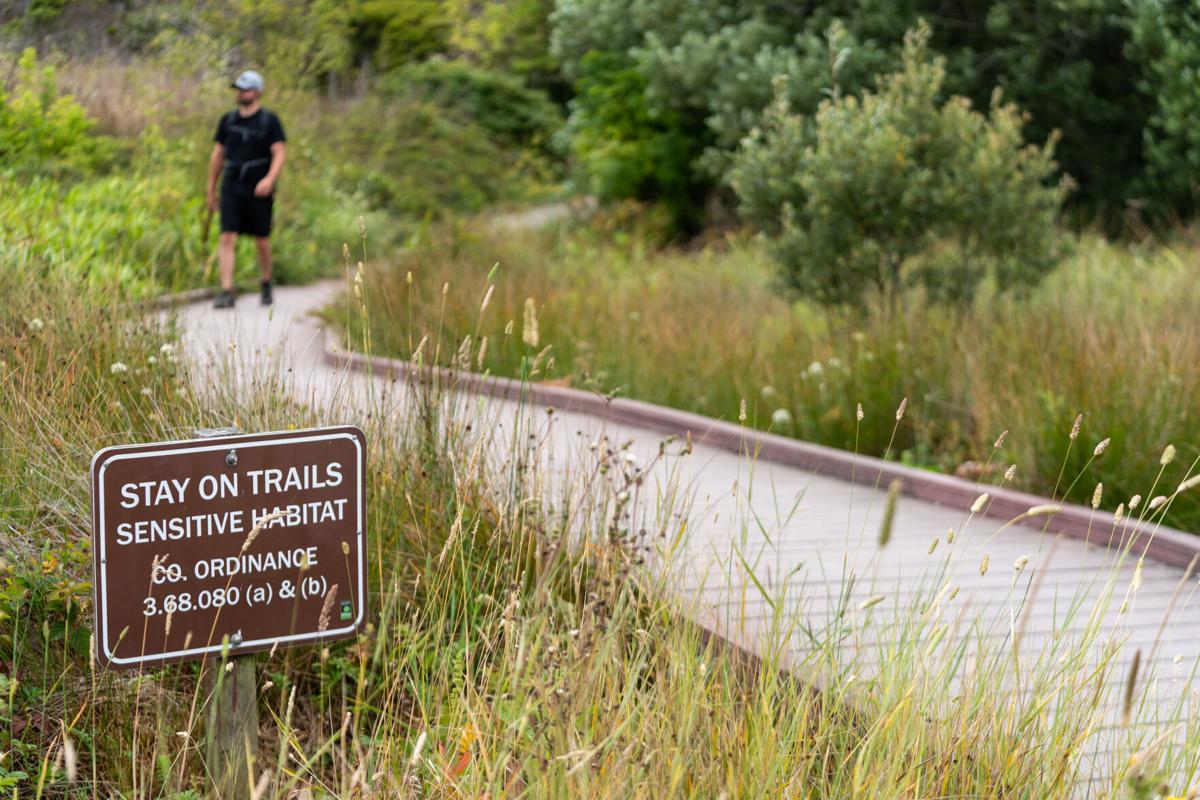 Signs notifying people visiting the Pillar Point Bluff trails that they are in a sensitive habit. Adam Pardee / Review 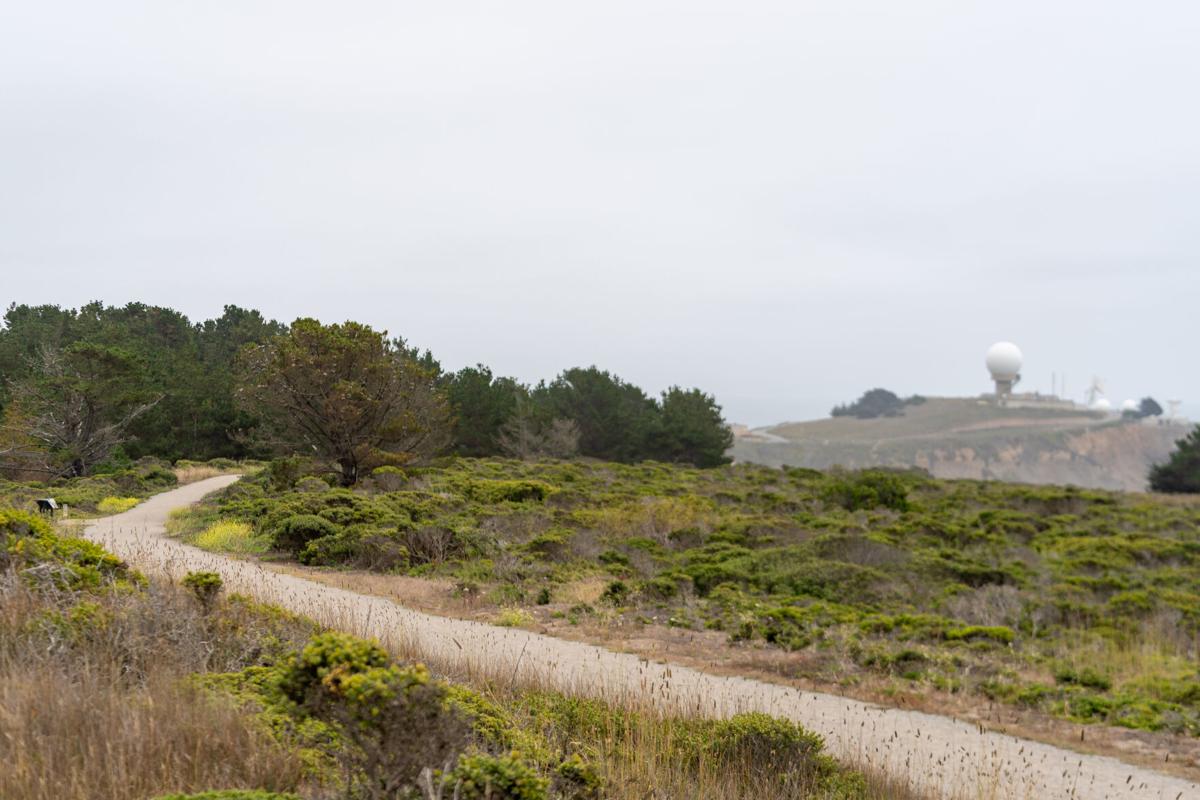 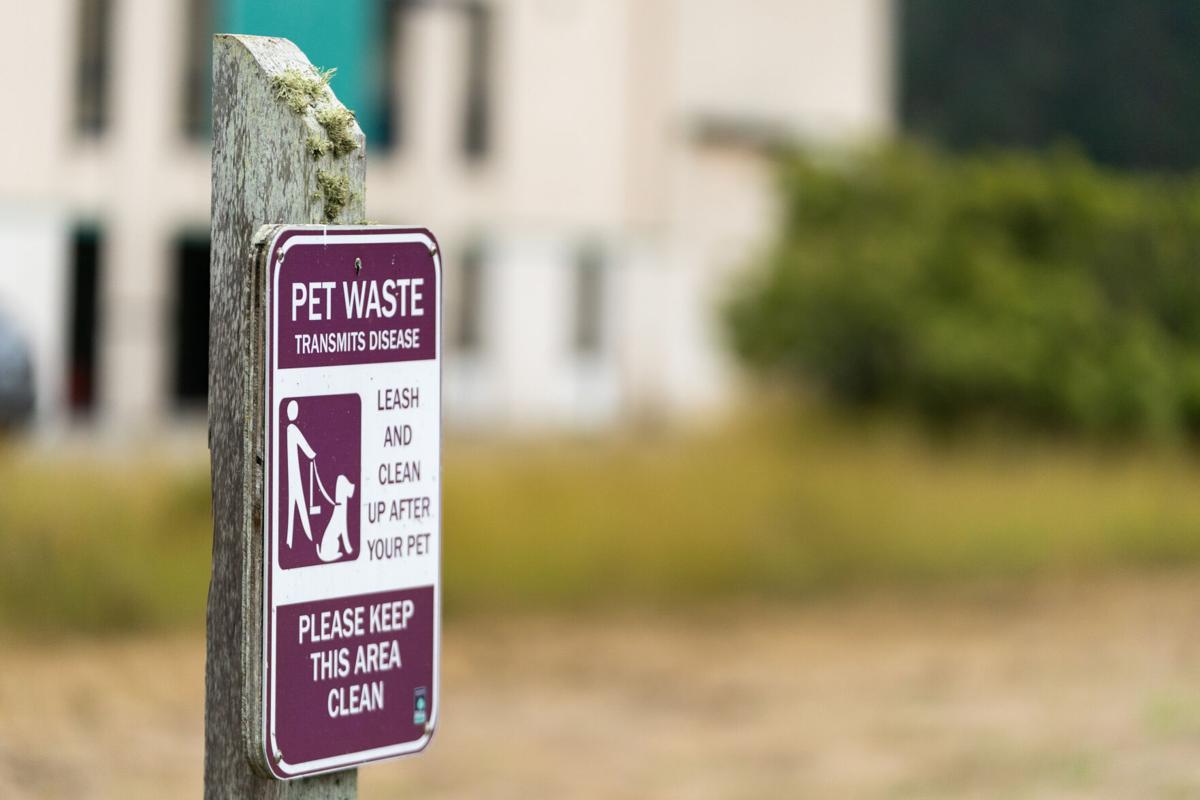 Pet waste sign at the trailhead to the Pillar Point Bluffs with information requiring that dogs be leashed on the trails in Half Moon Bay. Adam Pardee / Review

A one-year pilot program allowing dogs off leash on some trails in two county parks is up for public comment as part of the environmental review process.

The pilot program, which would allow dogs off leash at most trails in Quarry Park and Pillar Point Bluffs for one year, is the result of more than five years of conversations from community working groups. The first community group to discuss the issue was created in 2016 to expand on-leash dog access to county parks, followed by the creation of the current Dog Work Group in 2018, which came up with a set of recommendations for a 12-month off-leash pilot on some local trails.

Implementing the pilot program would require amending a San Mateo County ordinance that prohibits dogs from being off leash in all county parks.

The draft shows off-leash dog trails proposed for the central trails at Pillar Point Bluff and all but three sections of Quarry Park. County Parks Director Nicholas Calderon said that with a few exceptions like limiting dog access to Ross’ Cove, the current project proposal undergoing environmental review mirrors the recommendations from the work group. The working group is composed of a diverse set of people and rangers who use trails for different purposes, such as equestrian uses, biking, walking and running.

If the project is authorized by the Board of Supervisors and Planning Commission this fall, Calderon said the 12-month pilot could begin as early as this year.

During the yearlong period, the county would post signs and conduct outreach to make residents aware of the new rules. The county would then monitor trail use and code compliance to assess the success of the pilot and note any changes in trail usage. Calderon said the county would also be monitoring any environmental impact the pilot has on local trails, and would consider in the future modifying the trails that are open to off-leash use to achieve a balance between the priorities of users and the environment.

Calderon said he hopes residents take advantage of the public comment period to voice their thoughts and concerns, and to attend a virtual public meeting scheduled for 4 p.m. on Aug. 5.

“This is a public process,” Calderon said. “We want to hear from as many people in the public as possible regardless of their perspective.”

Chris Johnson, who represents the Coastside on the work group, said it’s past time to update the county ordinance to reflect the change in culture and the fact there is little access to off-leash space on the Coastside. But he doesn’t agree that an environmental review is necessary to launch the pilot. Johnson said he’s worried that the public process will only serve to rehash more than a dozen public meetings and conversations hosted by the county and the work group over the past half-decade and that it will slow progress toward a solution.

To Johnson, the effects of off-leash dogs in an area like Quarry Park, where vegetation management and trail maintenance is common, seems negligible.

“It feels unnecessary,” Johnson said. “... Now with the EIR, we’re going to have to hear this all over again, retread old ground and open up new wounds. … It’s going to spill over onto the trails of Quarry Park.”

Also included in the proposal is an amendment to another county code to allow park rangers to remove people for violating an ordinance. Calderon said the amendment was included to provide rangers with a tool for enforcing new and existing codes, and wouldn’t be limited to dog-related incidents.

“The reality is it's just one more tool we can have in the toolbox,” Caleron said.

Johnson said he agrees that enforcement policies are necessary, and said he hopes that people visiting parks with dogs abide by the rules and don’t set themselves up for a confrontation.

This is terrible and irresponsible! People have the right to walk on the bluffs and beach without being assaulted.

Anyone reading local social media would see the many comments by people injured --- bitten, knocked down, scratched, and their dogs attacked too by dopes with off-leash dogs who won't keep away from people.

Now you want to increase the carnage? What are you thinking?

If you're looking to get sued by people getting injured, this is just the ticket.