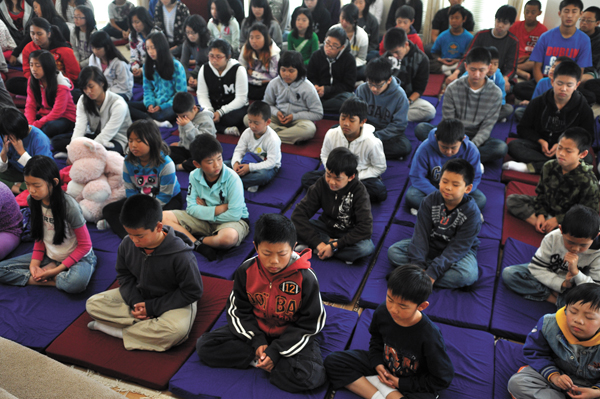 Summer camp students sit quietly during an exercise in meditation at the Theraveda Buddhist Society of America in Half Moon Bay. 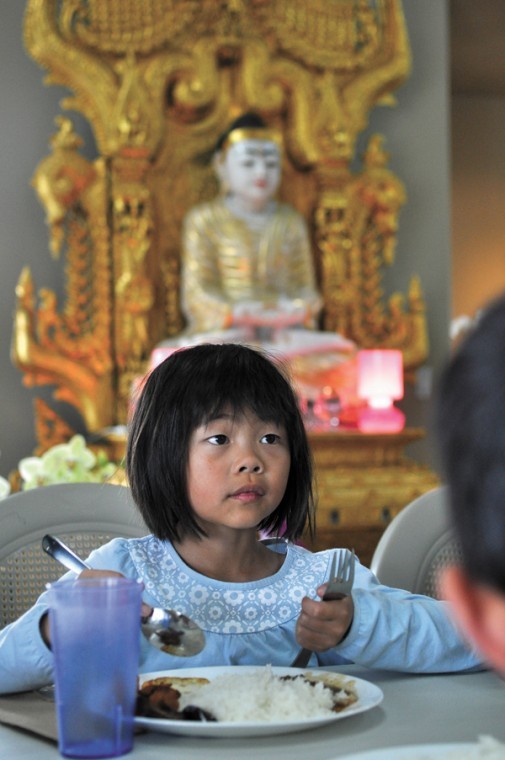 Tiffany Chan, of San Francisco, eats lunch, on Thursday. She was in Half Moon Bay for a weeklong summer camp at the Theraveda Buddhist Society of America. 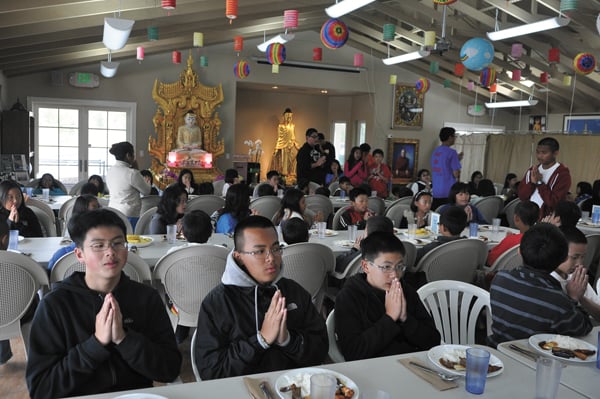 Summer camp students recite a Buddhist prayer prior to the start of lunch, at the Theraveda Buddhist Society of America in Half Moon Bay. 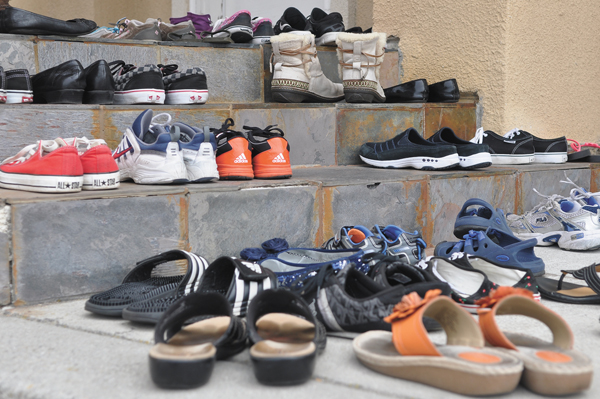 Shoes pile up outside of a mediation center on the property. 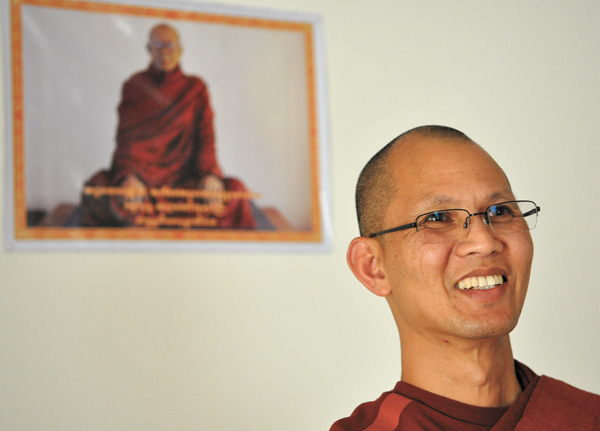 Above, Ashin Osadha is the second monk to the abbott at the Theravada Buddhist Society in Half Moon Bay. At right, shoes pile up outside of a mediation center on the property.

Summer camp students sit quietly during an exercise in meditation at the Theraveda Buddhist Society of America in Half Moon Bay.

Tiffany Chan, of San Francisco, eats lunch, on Thursday. She was in Half Moon Bay for a weeklong summer camp at the Theraveda Buddhist Society of America.

Summer camp students recite a Buddhist prayer prior to the start of lunch, at the Theraveda Buddhist Society of America in Half Moon Bay.

Shoes pile up outside of a mediation center on the property.

Above, Ashin Osadha is the second monk to the abbott at the Theravada Buddhist Society in Half Moon Bay. At right, shoes pile up outside of a mediation center on the property.

Cows lowed in front of a rustic barn, and traffic rattled by along Highway 1. But last week, inside a Buddhist monastery just off the road, there was peace.

Dozens of children, ages 5 to 15, sat cross-legged on deep-blue cushions with eyes closed. Their faces were silent and serene.

“There was so much noble silence,” glowed meditation leader Eugenia Kaw. “Wasn’t that good? Let’s keep up the noble silence.”

Whether they knew it or not in that meditative moment, the children represent part of a solution to a problem that many immigrant families face: Thousands of miles from an ancestral homeland, how can people stay connected to their roots?

The Theravada Buddhist Society of America in Half Moon Bay answered with summer classes targeted toward Burmese American kids.

Offered every year as a weeklong, sleep-away camp for older students or a day camp for younger students and their parents, participants learn about the life of the Buddha, meditation, kindness, love and more.

Some of these children are the first generation in their families to be raised completely in the United States. They have a unique challenge of balancing their Burmese heritage with their American identity.

Volunteer teacher Lionel “Li” Chan said he hoped the annual class would give kids and their families a chance to meet other Burmese families, pick up some Burmese culture and make friends.

Some of the students return year after year and eventually take on leadership roles to teach the next generation.

Chan, who is the Buddhist chaplain at San Francisco County’s Juvenile Hall, has volunteered at TBSA’s summer sessions for four years. Like Kaw, Chan teaches concepts such as how to use meditation to deal with stress and anger.

Resting before a golden statue of the Buddha, a relaxed Chan eased the students out of their five-minute meditation exercise.

He then shepherded them off to eat a home-cooked lunch that consisted of a fragrant Burmese beef curry, vegetables, rice, wedge-cut potatoes and bananas, in part prepared by Daniel Bomya.

In addition to serving as cook and program coordinator, Bomya also serves as purveyor of fun, organizing activities like tie-dying T-shirts or Capture the Flag.

“It’s good to have a balance,” he said. Besides serious conversations about rebirth, “the kids have a lot more fun things to do.”

This is just one way to keep kids engaged, but something as simple as the language spoken also has an impact.

“The challenge facing Buddhist Burmese is, how do you continue to teach? Because most (Theravada) monks don’t speak English,” said Chan, referring to the belief system that is primarily practiced in Myanmar (the modern name for Burma), Cambodia, Laos, Thailand and Sri Lanka.

The three resident monks at the Half Moon Bay monastery are unique because they do.

Program volunteers also teach the classes in English, appealing to the 106 bilingual students.

Most of the kids are from Daly City and Fremont, which have significant Burmese populations, but some have come from as far away as New Jersey and New York.

The Coastside serves as an ideal retreat for all.

Threatened by political strife and civil war for decades, many Burmese started to relocate to the United States in the 1960s.

The United States Census reports that from 2000 to 2010 the Burmese population in the U.S. jumped by about 500 percent.

According to Myanmar Community USA President and CEO Felix Chin, surveys like the U.S. Census underestimate the number of Burmese living in the Bay Area, but local Myanmar community organizations count more than 100,000.

Chin said few people choose to declare Burmese identity in the survey for fear of political repercussions from the Myanmar government for seeking refuge abroad.

Others, though born in Myanmar, report as being ethnically Chinese or Indian — a nuance the Census is incapable of measuring.

For members of the Myanmar community in the U.S., there’s a lot to think about in terms of identity.

“We have to pay attention to both cultures. We have to maintain our traditions,” Chin said. “We are a cultural bridge.”

This also means there are opportunities to share and celebrate these diverse backgrounds.

Half Moon Bay’s TBSA hosts guest-speaker events and festivals throughout the year, which are open to all.

Visit www.tbsa.org for more information and a calendar of events.

Thank you for the informative article and delightful photos about the 1-week children summer classes at the Theravada Buddhist Society of America (TBSA) in Half Moon Bay. Because Half Moon Bay is such a lovely community, it is not difficult to get the children and volunteers to come back every summer,

Each year there is a designated theme, and all the children write an essay about it. This year the theme was "Loving-kindness" and the many essays submitted were heartfelt and insightful. Loving-kindness was also practiced through meditation and shared with everyone at TBSA and Half Moon Bay. [smile]

In the pre-dawn hours of Nov. 22, Ron Kucera finally returned home. When he pulled into his …

Due to high demand, appointments are now required for COVID-19 shots and boosters at all San…

In the midst of a coronavirus pandemic that shows no signs of ending, California is still re…