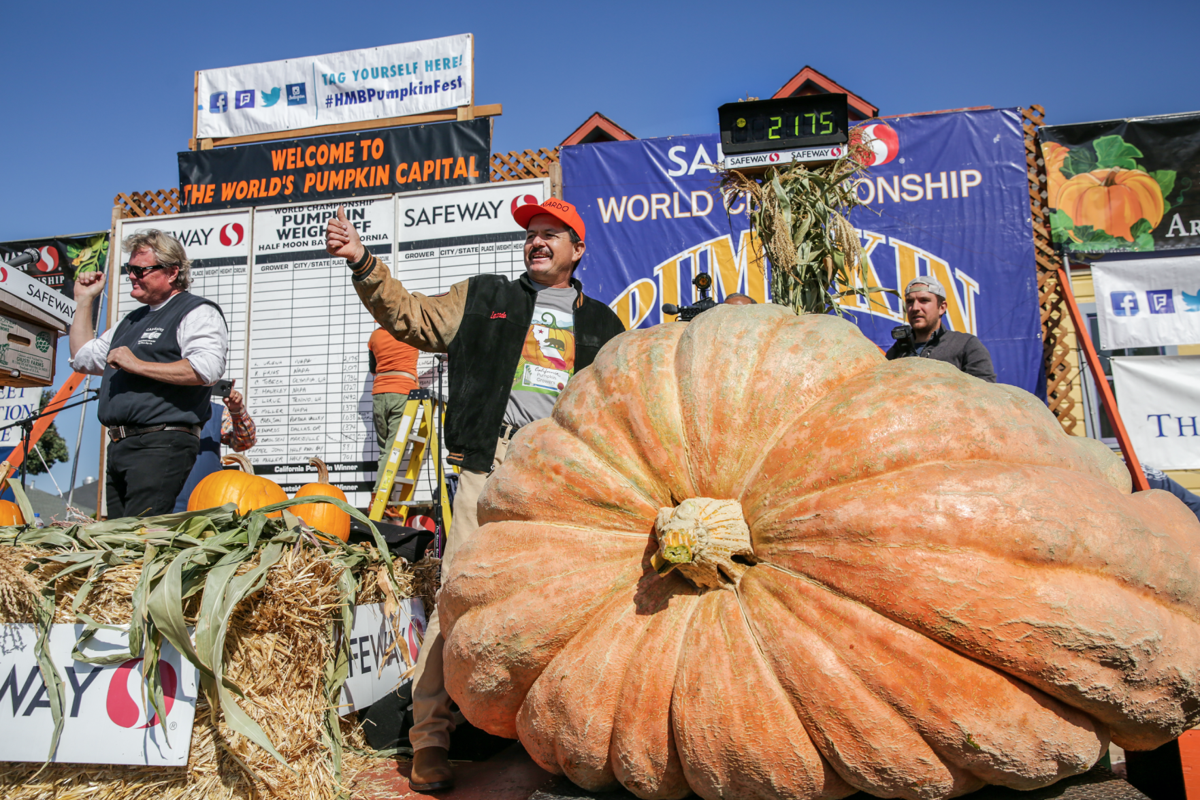 Leonardo Urena of Napa captured the title at the Half Moon Bay World Championship Weigh-Off on Monday. Kyle Ludowitz / Review 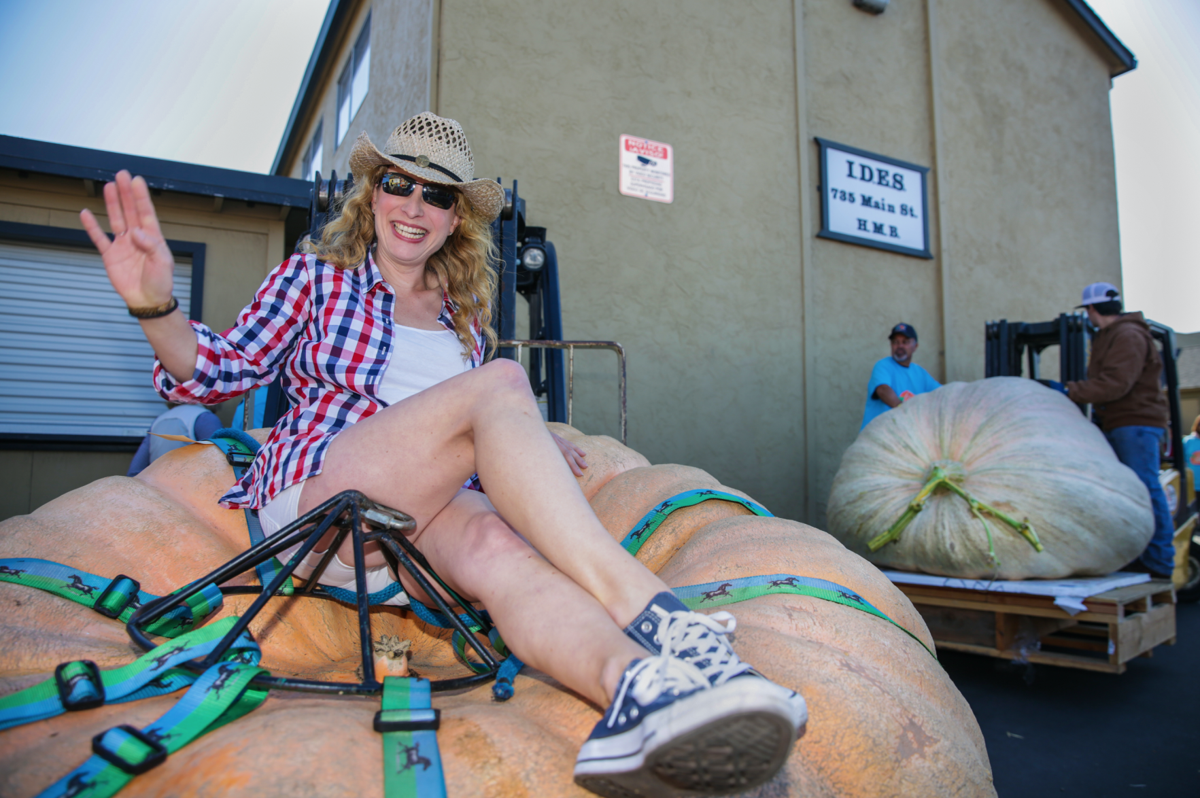 Cindy Tobeck rides on her pumpkin while being transported to the scale. Kyle Ludowitz / Review 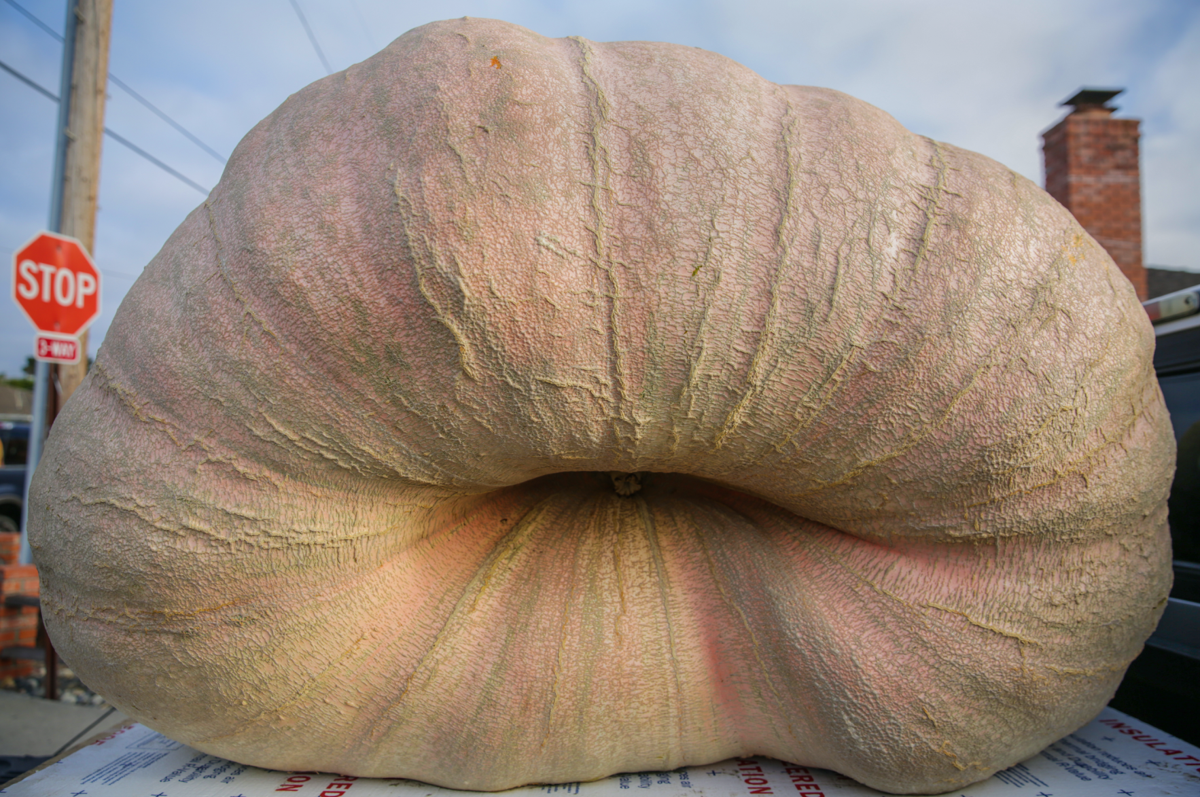 A whopping Atlantic Giant pumpkin sits in the bed of a truck waiting to be weighed. Kyle Ludowitz / Review 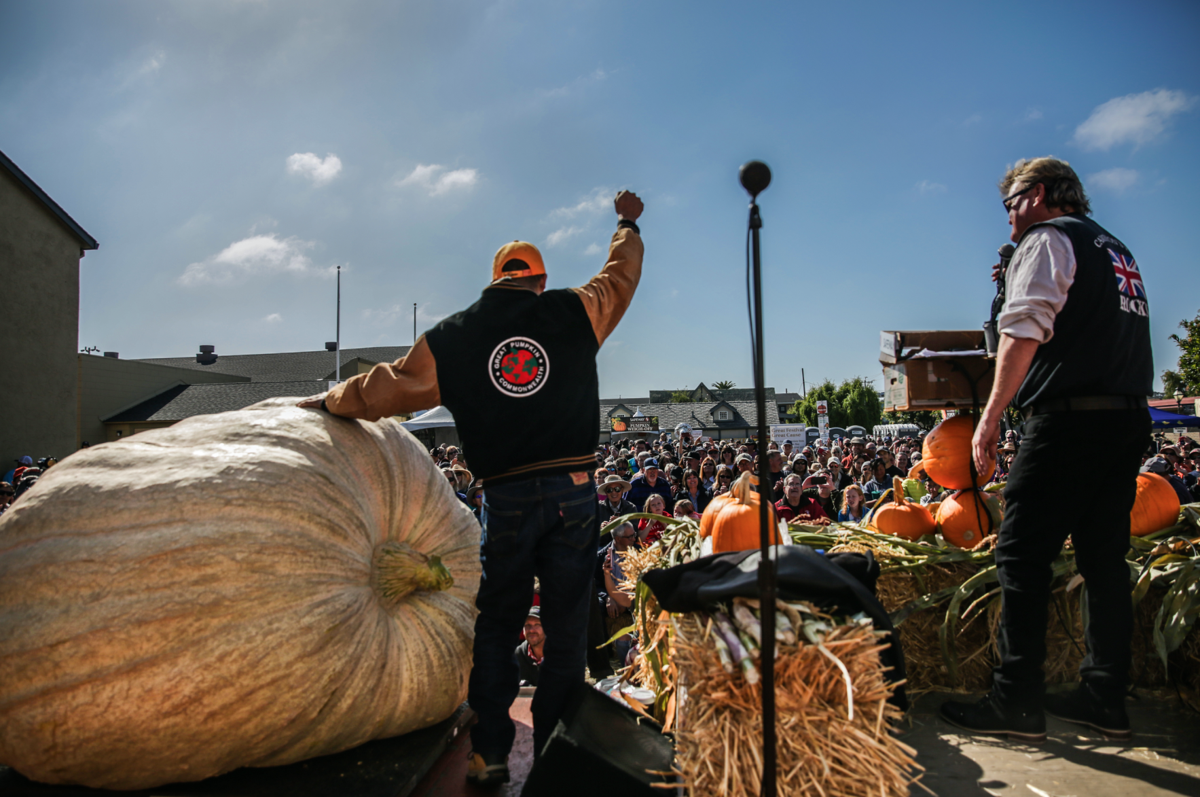 Leonardo Urena from Napa county celebrates after seeing that his pumpkin took the California state record for his 2,175 pound pumpkin. Kyle Ludowitz / Review 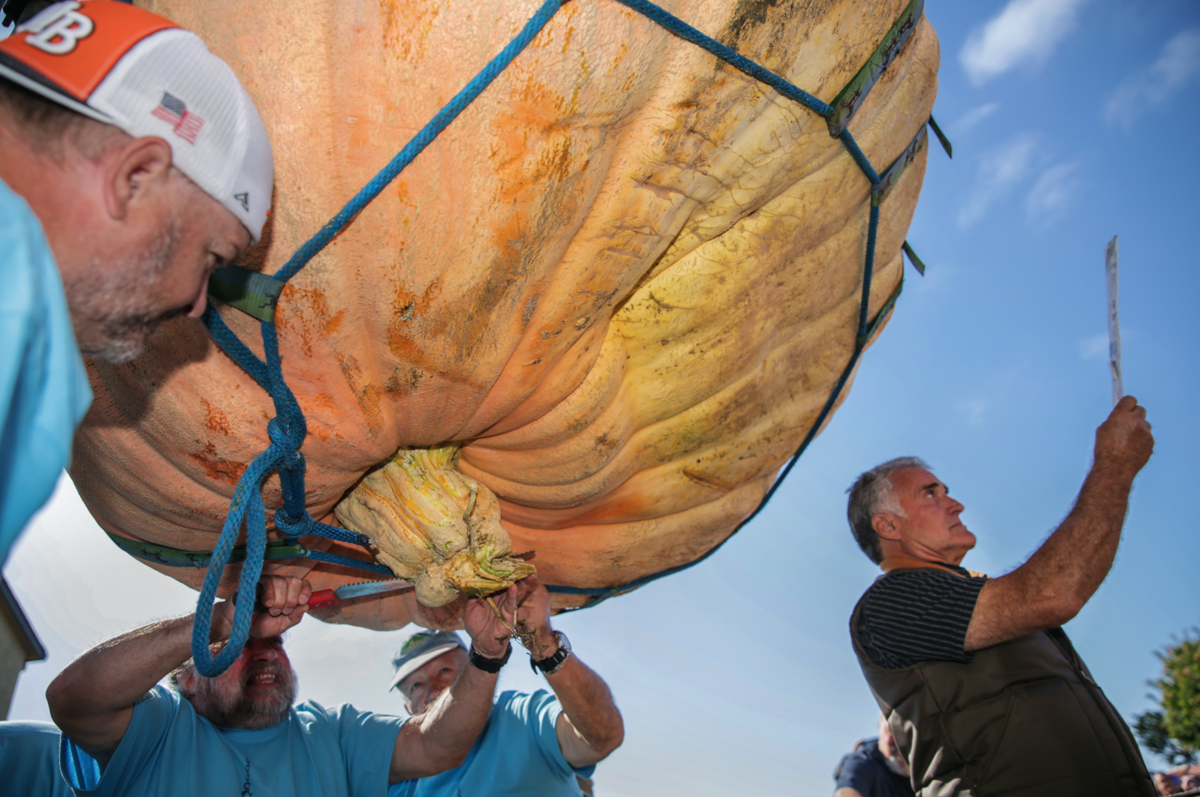 Judges check the underside of each pumpkin to make sure it qualifies for the competition. This pumpkin was grown upside down and the stem had to be cut for the pumpkin to properly sit on the scale. Kyle Ludowitz / Review 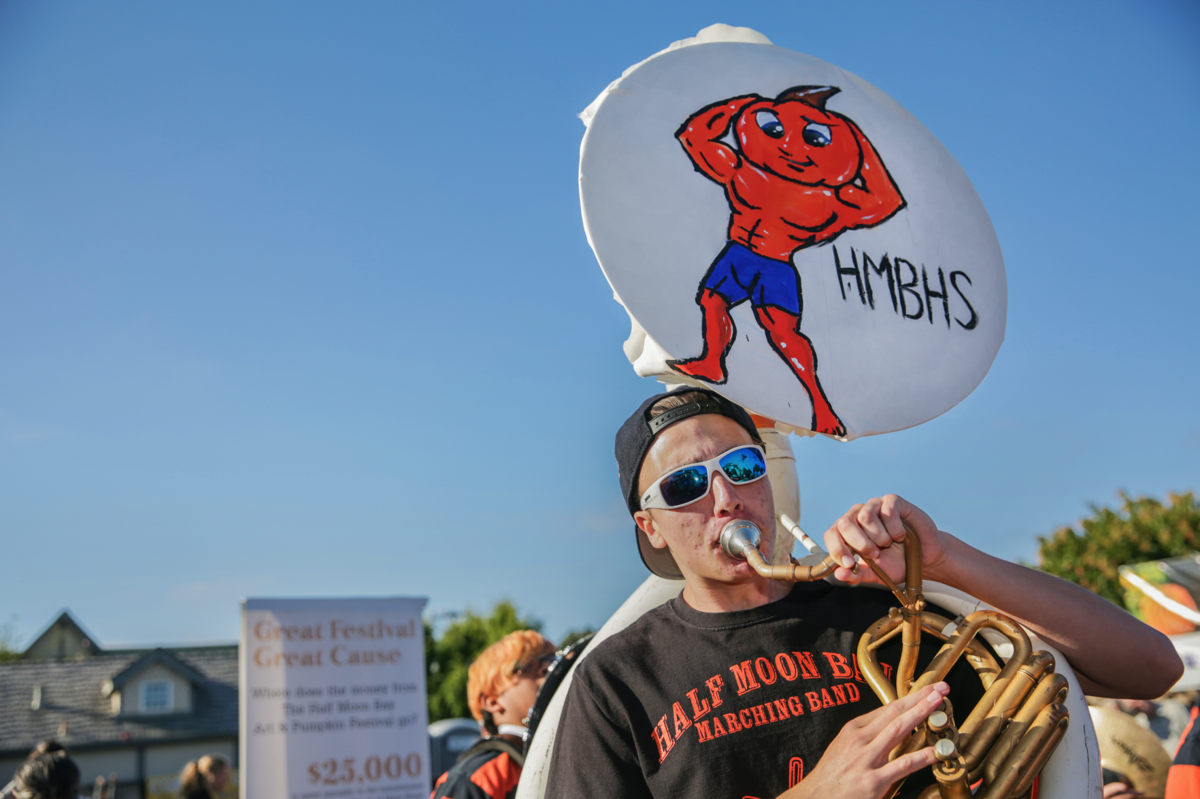 The Half Moon Bay High School marching band keeps the tradition of playing at the pumpkin weigh-off and during the festival parade. Kyle Ludowitz / Review Coastsiders and tourists gather behind the IDES Hall on Johnston Street to take photos of the giant orange contenders. Kyle Ludowitz / Review 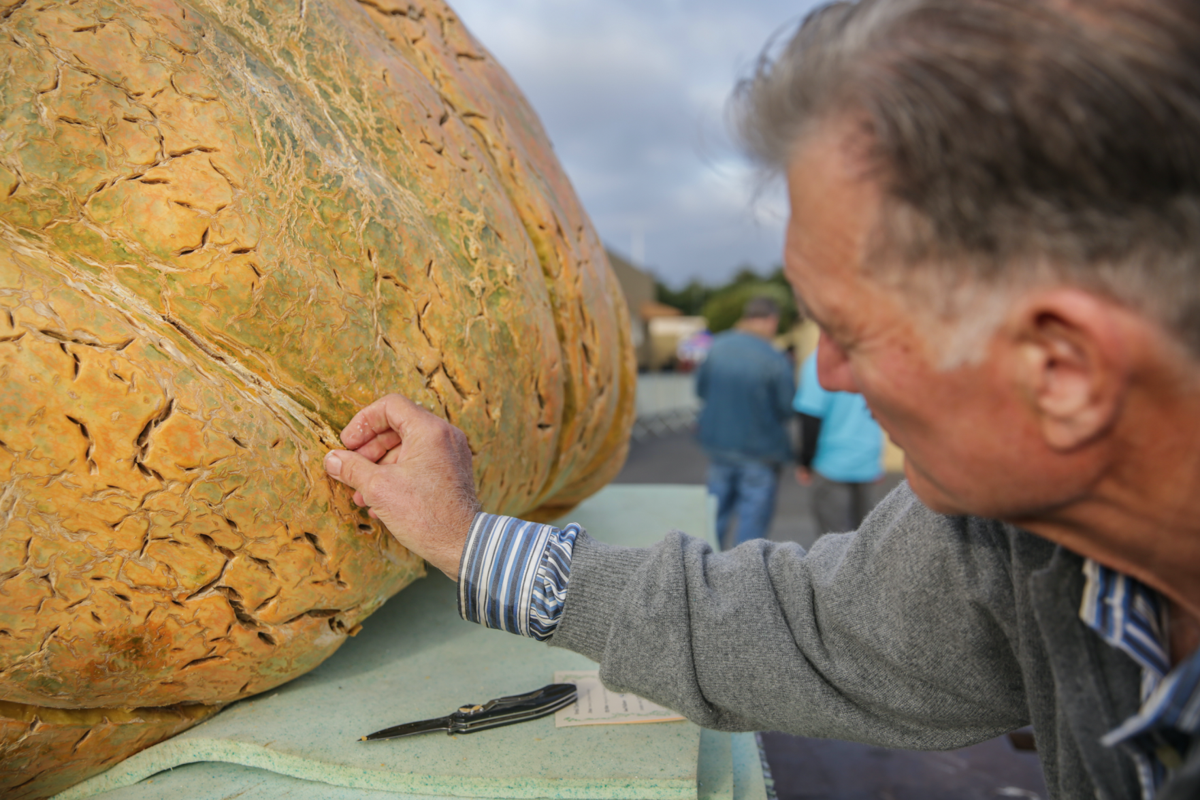 Brant Bordsen tends to his pumpkin behind the IDES Hall. Kyle Ludowitz / Review 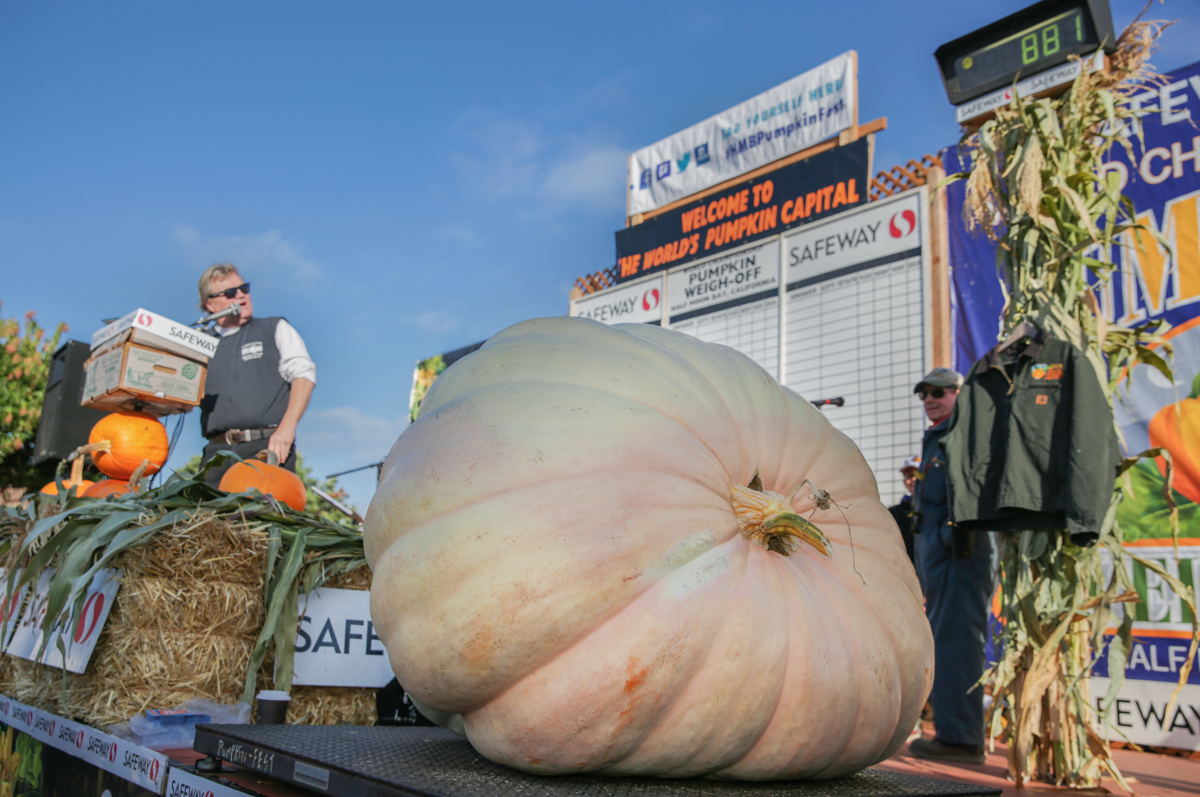 The Half Moon Bay World Championship Weigh-Off kicks off the start of the Art and Pumpkin Festival. Kyle Ludowitz / Review 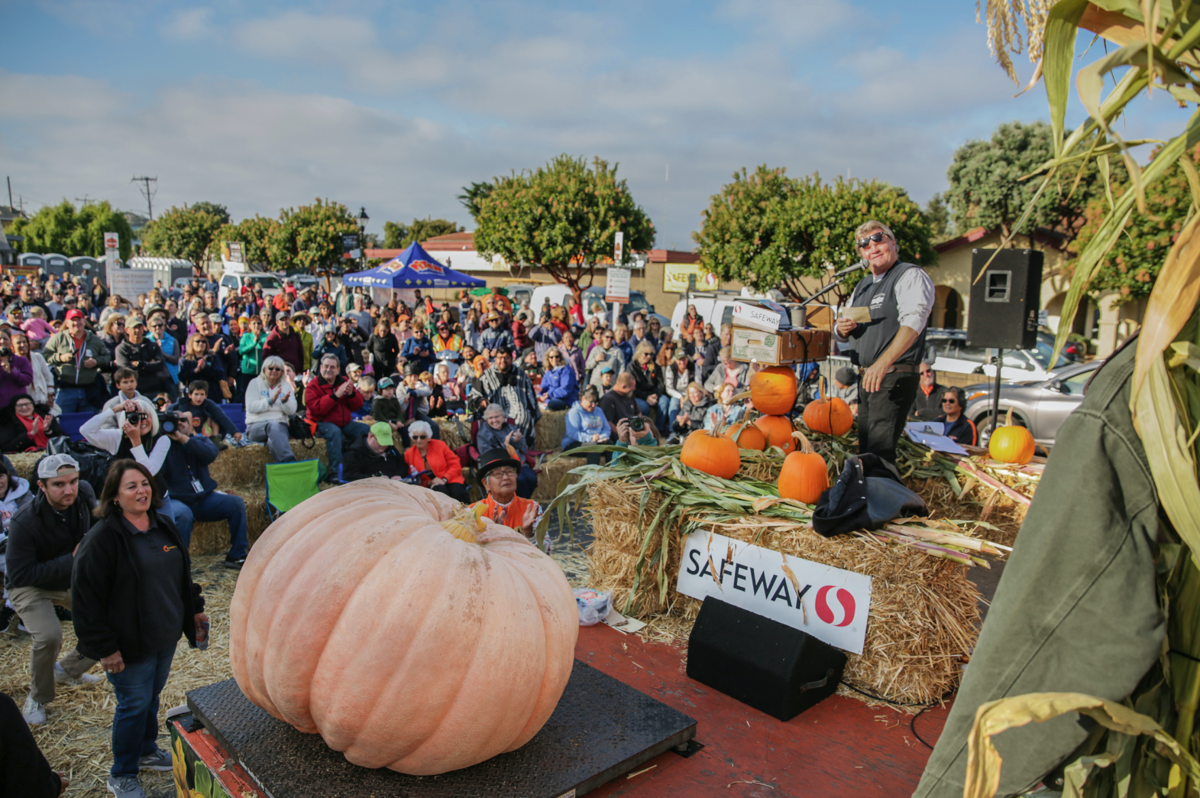 The Half Moon Bay World Championship Weigh-Off and the Art and Pumpkin Festival has become the town's largest event and grows each year. Kyle Ludowitz / Review

Napa’s Leonardo Urena took home the top prize at the Half Moon Bay World Championship Pumpkin Weigh-off on Monday. It marked his second victory in a decade.

His great Atlantic Giant pumpkin tipped the scales at 2,175 pounds, setting a new record for the heaviest pumpkin in California. In addition to the glory and title of winner, he was awarded $15,225 or $7 per pound.

Jose Ceja held the previous state record with a 2,138 pounds pumpkin in 2018.

A chilly start to the morning did nothing to deter people from gathering around the hay bales surrounding center stage at the I.D.E.S. grounds on Main Street. Growers from the Coastside, other areas of the state and as far north as Washington state gathered to show the fruits of their efforts for the year.

The competition helps kick off the festivities for the coming week, culminating in the two-day Half Moon Bay Art and Pumpkin Festival. On hand to play music was the Half Moon Bay High School marching band, which was tasked with raising the crowd’s spirits in between each weighing.

A bit after sunrise, the pumpkins were being hauled up by forklifts and harnesses onto the scale at the 46th annual weigh-off. Eager spectators arrived early to get a good viewing spot to witness the grand event.

Husband and wife Lonnie and Madeline Sopko, from South San Francisco, were among the first to arrive. The couple has been coming to the event for the last four years and makes a little game out of trying to guess the weight of each of the pumpkins.

“I am anxious to see which one will take the top prize,” Madeline Spoko said holding a cup of hot coffee.

Sitting in the front row at the stage was La Honda resident Joe Barrett. He said he’s been attending for several years and enjoys participating in the festivities without the large crowds that come over the weekend.

For the competitors, the morning started before dawn with pickup trucks hauling this year’s giant gourds onto Johnston Street behind the event stage. Veteran and novice growers alike wear jackets adorned with their names and patches marking any previous competitions they have won.

Gary Miller, winner for 2013, said this was one of his better years. At his ranch in Napa, he grows about 60 giant pumpkins and selects the best one to bring to the competition.

“It’s a unique experience and it’s just fun to do,” Miller said.

Transporting the pumpkin to the festival is the part of the process that can cause the most stress, he said. “It can be nerve wracking,” he said.

Some growers do not operate a large farm or own a ranch. Rather they are backyard enthusiasts who took up pumpkin growing as a hobby. Fremont resident Art Martinez brought his bright orange gourd hoping to win the title of “Most Beautiful Pumpkin.” He’s been growing pumpkins on a smaller scale at his home after he retired about eight years ago.

“I just think it’s neat and then I got hooked on it,” he said.

While Martinez did not place this year, his pumpkin was instantly a fan favorite for its seasonal color and shine.

Many of the longtime pumpkin growers were surprised to hear the predicted front-runner, Eddy Zaychkowsky, of Alberta, Canada, did not make it to the event. His pumpkin was discovered to have rotted underneath over the weekend. That disqualified his gourd from entering, according to the competition rules. Urena said he was sad to learn of the news.

“I wanted Eddy to come. I thought he had a chance to break the world record,” Urena said. The world record currently belongs to Mathias Willemijns, of Germany, who delivered a 2,624.6-pound pumpkin.

Zaychkowsky gave the seeds Urena used to grow his pumpkin this year while at a convention in Oregon.

“He is such a generous, good person,” Urena said.

Representing the Coastside in the competition was John Muller, who’s pumpkin named “Kona Moon” weighed in at 881-pounds.

As the winners were crowned this year, it was only fitting that Queen’s “We Are the Champions” played over the speaker system.

“I’ve been doing this for 20 years. If you want to achieve a goal, work hard and never give up. You can do it,” Urena said. “This sport changed my life and my attitude about life.”