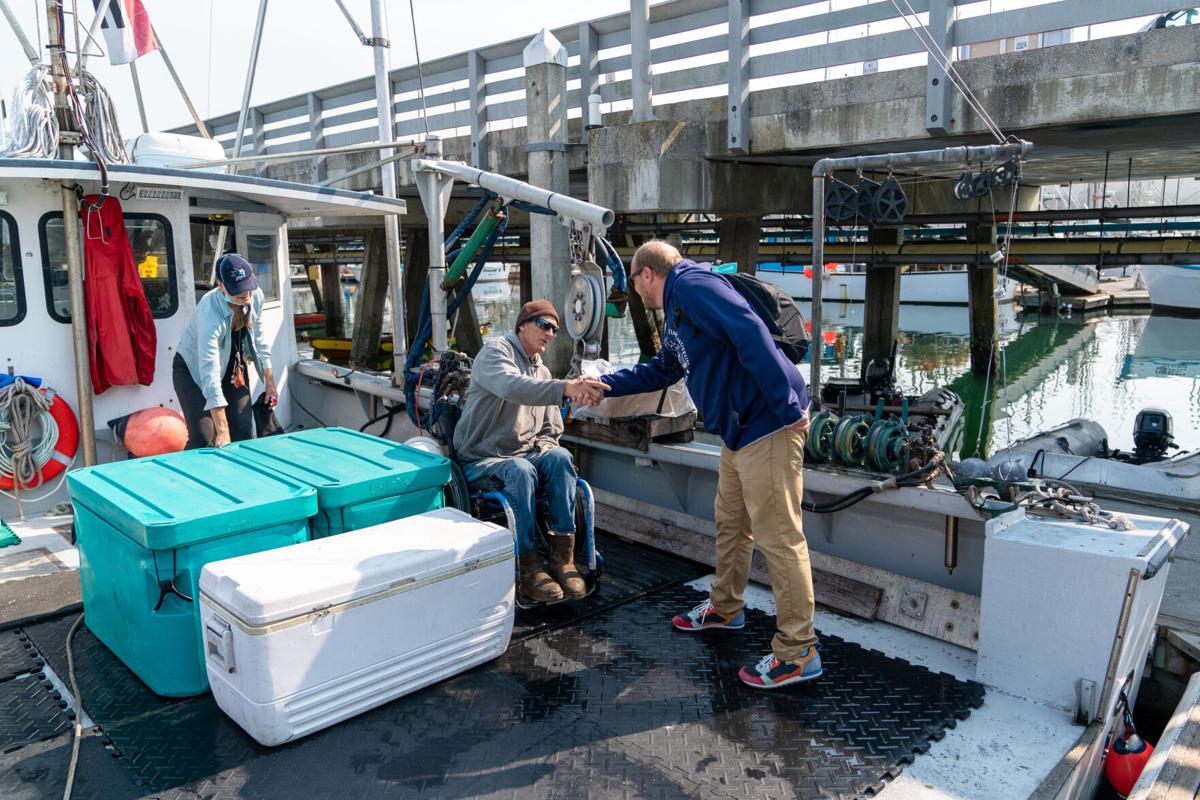 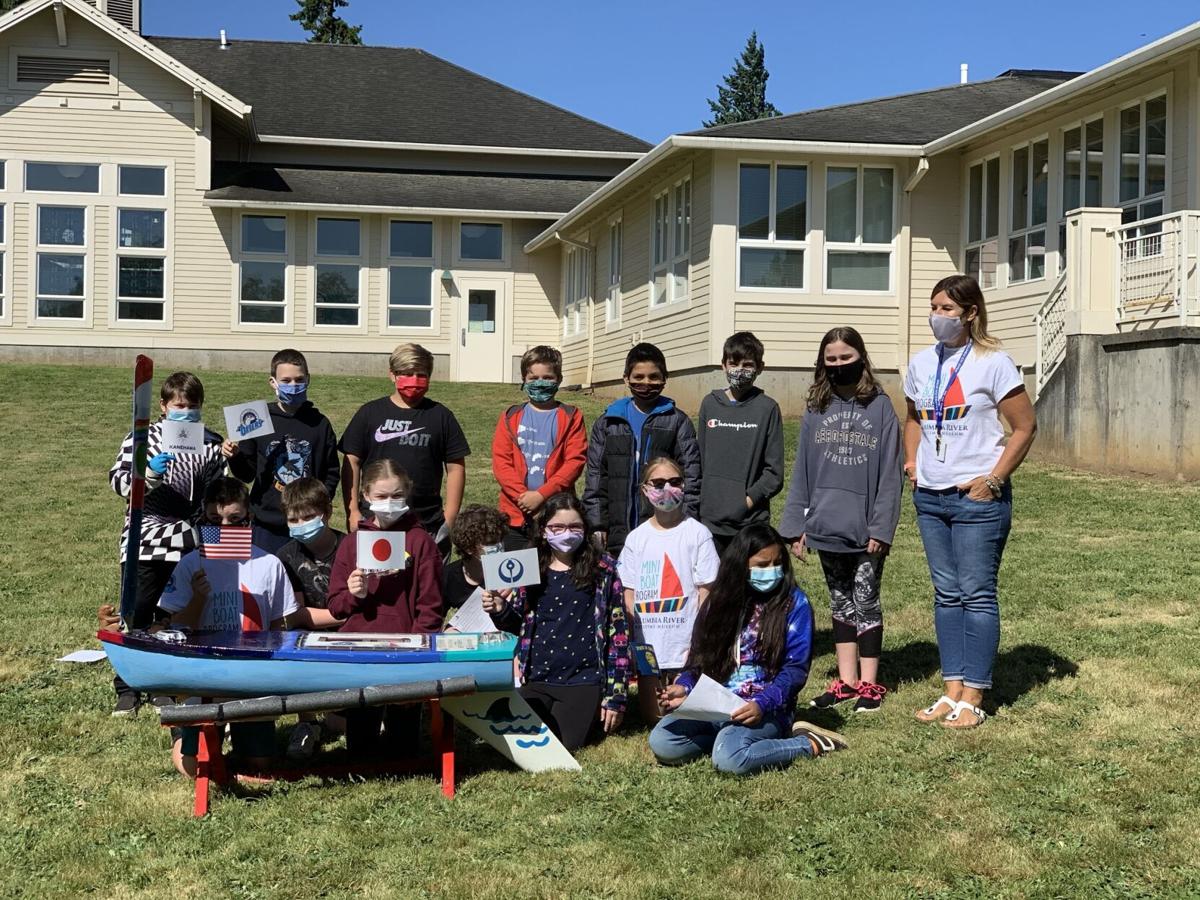 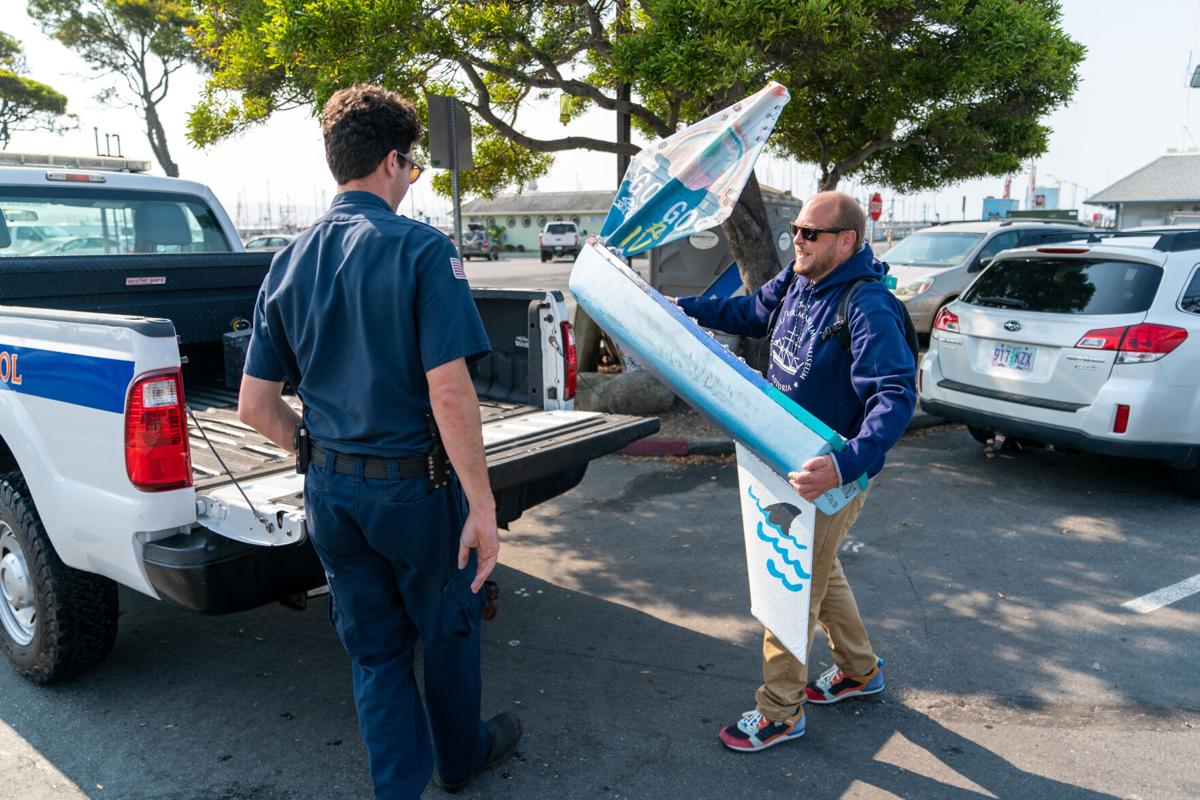 Deputy Harbormaster Adam Bloomer, left, helps unload Director of Education at the Columbia River Maritime Museum Nate Sandel's mini boat, the Second Wind, out of a truck to be taken to his car at Pillar Point Harbor. Adam Pardee / Review 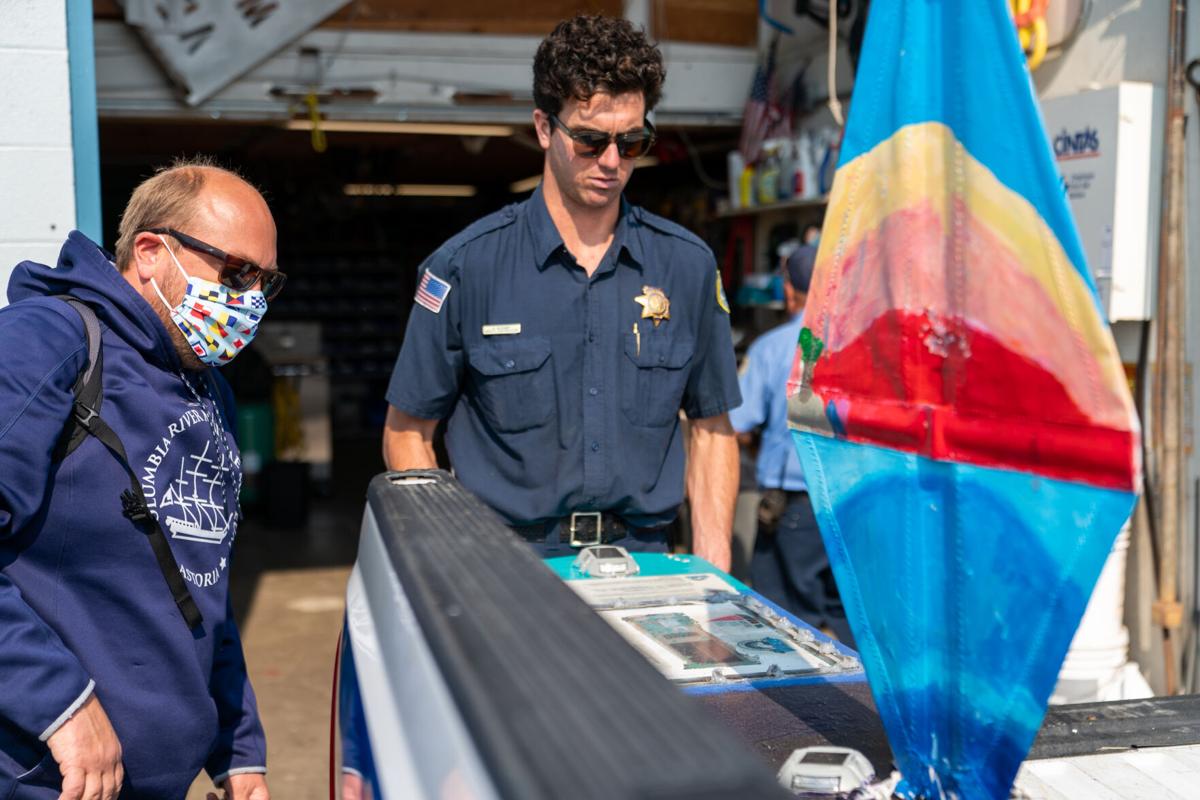 John Schultz, captain of the fishing vessel New Krabmandu, wasn’t sure what he was looking at exactly. After a day of work at sea, he and his deckhand Robert Gieskin had every reason to head back to Pillar Point Harbor, but a small object bobbing along the surface near the southern waters of Half Moon Bay caught their attention.

After mistaking it for a buoy, the crew noticed the object was a tiny unmanned sailboat about six feet long. And it was headed straight for the rocks in front of the Ritz-Carlton, Half Moon Bay. With about 100 yards to spare before the boat was dashed on the rocks, Schultz and Gieskin hauled the tiny boat aboard their own. The instructions and details printed on the sailboat were the first hints of its vast journey.

The sailboat the crew found on Aug. 2 was a “miniboat” named “Second Wind.” It was built by fifth-graders in Columbia City Elementary School in Columbia City, Ore. It had drifted more than 500 miles from its starting point off the Oregon coast on July 18.

The Second Wind is part of an ongoing project that spans the Pacific Ocean and involves people from two continents. The Columbia River Maritime Museum runs an educational program with elementary schools in Oregon, Washington state and Japan, which launches an identical fleet toward the United States. The museum has run this project since 2017. According to the museum’s website, 27 miniboats have traveled more than 75,000 nautical miles and are tracked by GPS daily.

As the saying goes, it’s the journey rather than the destination that matters. While officially the goal is to have the ships land in Japan, it’s primarily a learning experience for students to study mathematics and science, learn the nuances of the ocean and become invested in a long-term project, said Nate Sandel, the museum’s education director.

It was Sandel who saw that Second Wind motionless in Pillar Point Harbor thanks to the GPS monitor. Wondering about the state of the miniboat, he called the Harbor Patrol with the exact coordinates, which of course was Schultz’s boat.

They put the boat in storage, and when Schultz and the crew returned from dinner, they found their mysterious cargo missing. Wondering what had happened Schultz emailed Sandel, explaining the situation and apologizing for losing the boat after saving it.

“(Schultz) was very relieved that we knew where the boat was, that it was safe, and that we were very happy he saved it,” Sandel said.

Sandel typically works with three schools in the Pacific Northwest and another three in Japan each year. Because of the project’s vast scope, past classes still track their boats regularly.

“I get emails probably once a week from students from previous years checking on their boat and saying, ‘Remember our boat was upside down a year ago? Has it washed up anywhere?’” Sandel said.

It usually takes nine weeks for students to build the boats, which have fiberglass hulls and wooden bulkheads. Sandel said, this year, because of the pandemic, classes will take up to 16 weeks to build the boats and do more hands-on work. When news of the Second Wind reached Sandel, he spoke with three people at Columbia City Elementary to give them an update and discuss potential next steps.

With only a sail and no onboard navigation or maintenance, the ships are largely at the mercy of the elements, drifting where the wind, swell and currents take them. It’s not uncommon for boats to flip, so students have to build a correctly weighted keel so the boat can self-right. Other students work with the National Weather Service to find the right window to take full advantage of the westerly trade winds. Sandel hopes next year the boats will have mounted cameras.

Second Wind narrowly avoided the fate of its sister ship, “Destiny,” which was built at Eisenhower Elementary School in Vancouver, Wash. Destiny took a beating when it landed at Bodega Bay, snapping its keel and gashing a four-inch hole in the hull around the same time Second Wind was in Half Moon Bay. Members of the youth club San Francisco Sea Scouts repaired the vessel and gave it a fresh paint job at the San Francisco Maritime Museum.

Second Wind was on public display at Johnson Pier on Friday. Now the two boats that came to California together will continue their journey. Sandel said originally the plan was to have Schultz launch Second Wind again, a fitting job because of his role in saving it. But after discussions with the U.S. Coast Guard, they decided it would be better to hand it off to officers who could take both ships at once. Sandel said the Coast Guard plans to release both boats 50 miles west of San Francisco sometime this week.

At some point, Sandel expects to connect Schultz and students from Columbia City on a Zoom call to discuss the project. There are even talks of signed T-shirts and thank you notes in the works. While Sandel believes that participating students get valuable experience with STEM skills and learn about future careers in the maritime industry, his ultimate hope is more all-encompassing.

“Even if that’s not a clear goal they’re looking for, looking out over the ocean and realizing it’s this vast body of water, and at the other side are students just like them doing the same thing,” Sandel said. “It’s making the world a little bit smaller.”