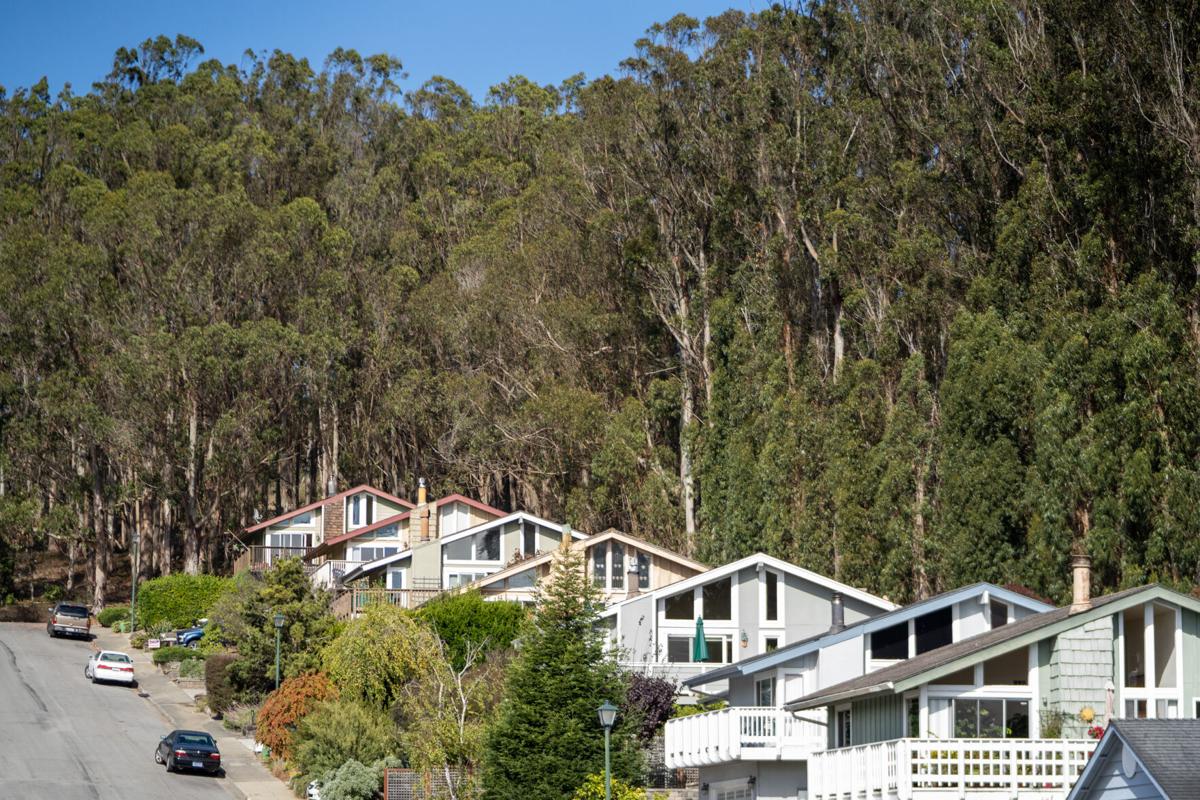 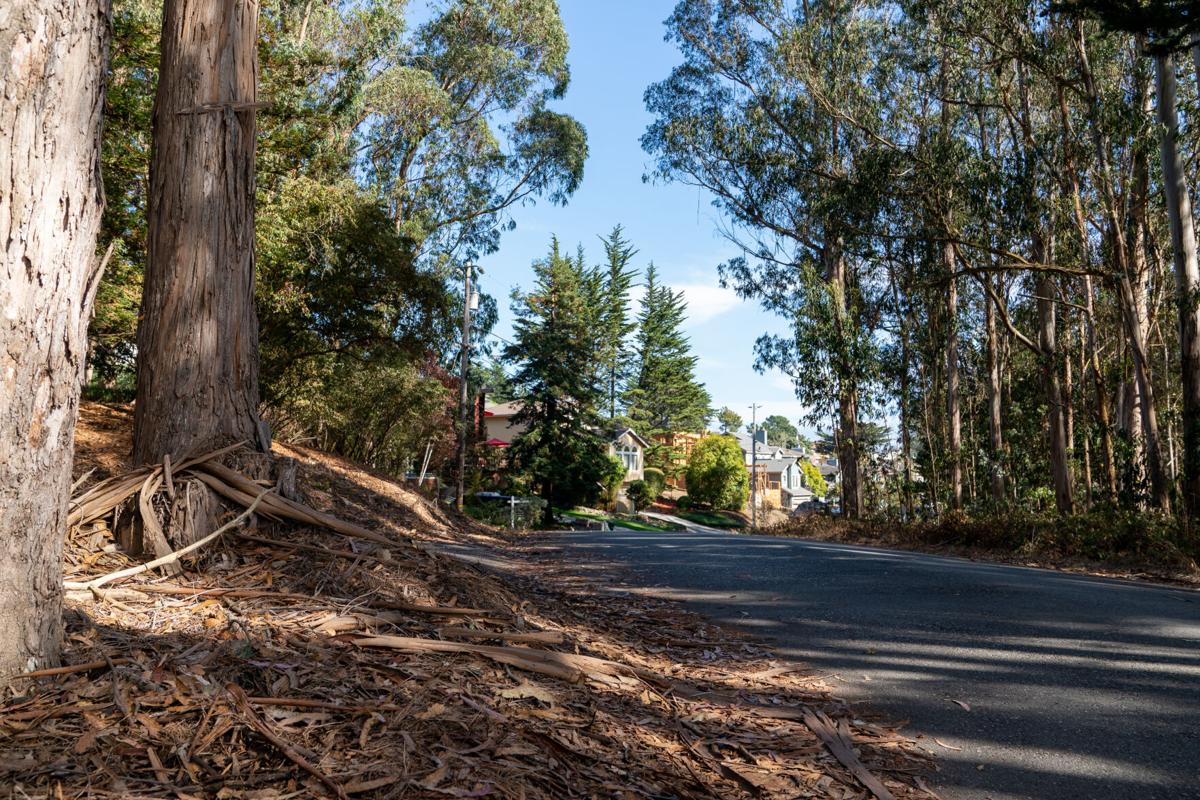 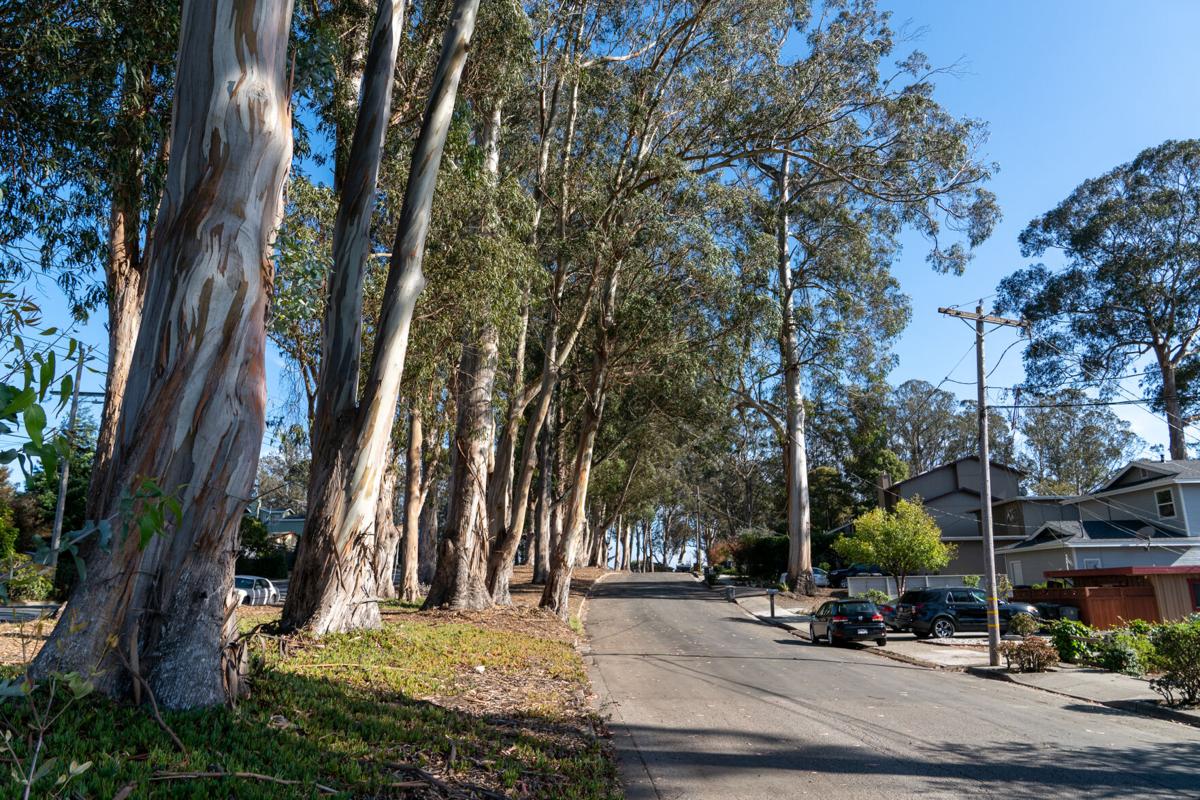 At a recent series of public meetings following the CZU August Lightning Complex fire, one thing seemed to be on the minds of everyone: eucalyptus trees.

Across the coast, the aromatic trees can be found lining roads, neighborhoods and densely populated in forests. They were introduced to the area from Australia in the mid-1800s and were planted vigorously in the 1900s to serve as windbreaks and to populate the area with trees in anticipation of a projected lumber shortage.

But as it turns out, eucalyptus trees are no good as lumber. They also shed branches and bark constantly, contribute to soil erosion and — due to toxic oils — can stop other species from growing. Finally, and this is why Coastsiders are abuzz today, they are serious fire hazards.

That’s why, following the recent wildfire that was the biggest in a century, local groups are working to address the problem.

The San Mateo Resource Conservation District is taking charge. Executive Director Kellyx Nelson said on top of its normal work on fuel load reduction that spans the Coastside, the district is in the early stages of forming a eucalyptus eradication project.

“I think the time to act is now, right now,” Nelson said at a Sept. 9 public meeting. “Eucalyptus is highly flammable and a very dangerous tree.”

Fuel reduction projects that target the nonnative trees are not new. San Mateo County, the Coastside Fire Protection District, CalFire and the RCD have been working to clean up the dense trees and fuel loads for more than a decade. In 2009, local agencies coordinated to demonstrate fuel reduction on Coral Reef Avenue in El Granada, and just last year, the county Parks Department began ongoing targeted maintenance in Quarry Park.

But local leaders and residents agree that more work needs to be done. Potentially hazardous trees tower over El Granada homes, and fire escape routes are lined with flammable giants. And as Midcoast residents awaited news of the CZU fire’s northward advancement last month, they took stock of escape routes, prompting growing concern about the large groves of eucalyptus dotting the Coastside.

New energy from residents means some leaps of progress may be possible. In the past, resident opposition has sometimes slowed progress, but it isn’t the only barrier to tree removal.

Cal Fire CZU forester Angel Bernheisel said a major problem with cutting down eucalyptus trees is that they aren’t typically commercially viable, so disposing of the cuttings can be costly and wasteful. Secondly, operating within the Coastal Zone means getting permits from the California Coastal Commission, a lengthy and complicated process. Finally, eucalyptus trees simply are difficult to manage: They generate massive amounts of dead fuel that hangs down to the forest floor, are often very large and unstable, and they grow back vigorously.

“Eucalyptus is a big commitment,” Bernheisel said. “It's a job that you're never going to complete.”

Nelson said the RCD is focusing on ways to streamline the permitting processes to get more done faster. Their new project may target tree control near homes or where wildfire would be most dangerous, but she said its scope will depend on funding, which varies widely depending on terrain, access and the mitigation method used. And in today’s economic climate, many of the district’s go-to sources have dried up, meaning the RCD will be looking to new private and public sources for help.

“The biggest barrier is that there are way more eucalyptus than we’re going to be able to address,” Nelson said. “It’s 100 years of eucalyptus growth, and it's fast-growing and fast-spreading. We need to be strategic so that it has the most multifaceted and long-lasting benefit.”

“If that lightning had hit El Granada, it makes the hair on the back of my neck stand up,” Nelson said. “Everyone should be thinking about this.” r

If we want to remove Eucalyptus trees, do we have to pay permit fees to do so? When reviewing the San Mateo Country website, it seems you have pay between $224 to $380 per tree, but not sure if that applies to the Eucalyptus that are a very high fire hazard.

The Monterey Cypress is invasive here too. This is coastal prairie and scrub with no truly native trees. I love coyote brush and coffee berry my self. But how are you going to hide all the ugly houses?

After seeing the horrific destruction from the fires, I wouldn't mind seeing the ugly houses.

Thanks to precautions and preemptive security updates, the San Mateo County Harbor District …

Kayaker calls in safe after concern

Emergency crews searched for a kayaker near Pillar Point on the afternoon of Sept. 15 after …