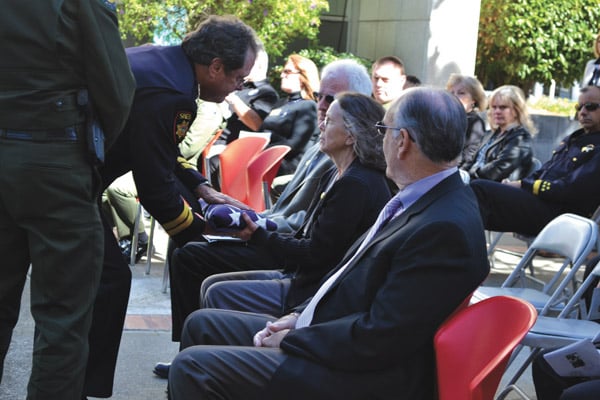 San Mateo County Sheriff Greg Munks gives an American flag to Mary Scully Edholm, the sister of Patty Scully, a State Parks ranger who was killed in the line of duty in 1976. 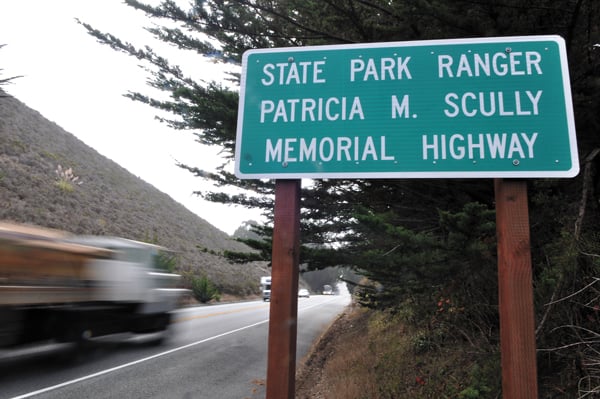 San Mateo County Sheriff Greg Munks gives an American flag to Mary Scully Edholm, the sister of Patty Scully, a State Parks ranger who was killed in the line of duty in 1976.

In April 1976, California Department of Parks and Recreation Ranger Patricia Scully celebrated her 25th birthday. She had much to be joyous about.

She loved her job as a peace officer for Pescadero State Beach, where she educated visitors about the environment and worked on a historical survey of the elephant seals at Año Nuevo State Park in her free time. She was working to obtain her master’s degree in anthropology and environmental resources from Sacramento State University. She was engaged to Ranger Leslie Cowie.

Those dreams never came to fruition. Less than a month after turning 25 years old, Scully was killed in a car accident caused by a reckless teenage driver.

“We were devastated, of course,” said Mary Scully Edholm, Patricia’s younger sister. “She was the first person in our family to pass away. It was tough for our parents to lose a child.”

Nearly 40 years later, then-State Parks Peace Officer Stephen Barber came home from work around 11 p.m., restless after a difficult day on the job. The Fresno County-based ranger logged onto his computer and went to the website memorializing fallen peace officers. He saw Scully’s name and read a profile of a woman he had never heard of before. He tried to research her online and came across little about her life and death. It unsettled him.

“I didn’t know the family at all; I wasn’t born by the time Officer Scully had died,” Barber said. “I just thought it was a good idea to honor her commitment to State Parks.”

By dawn, Barber had written a letter to state Sen. Leland Yee, asking that he consider legislation to dedicate Highway 1 north of La Honda Road, near the accident site, in her name.

The letter set off a series of events. SCR 102, a resolution to designate that stretch of Highway 1 for Scully, was signed by Gov. Jerry Brown in September 2012. In June, there was a commemoration ceremony at San Gregorio State Beach. And on Sept. 25, the San Mateo County Sheriff’s Office added her name to its memorial of fallen officers.

“When she died in 1976, they did not have that memorial at all,” said Tom Scully, Patricia’s older brother. “It was created a couple years later. And when they went back and did their research they somehow didn’t see (her death) in their records.”

Shortly after her death, her family established a memorial fund in her name with the National Audubon Society so that those working in an environmental field could attend Audubon Society training sessions. State Parks Ranger Nelle Lyons, who is stationed along the Coastside, received the scholarship in 1999, around the same time she transferred to San Mateo County.

“To me, it was really surprising there was a scholarship named after this woman who was killed right in the same area where I worked, and later thinking about the time frame (when she worked) was more significant,” Lyons said.

Scully grew up on an egg ranch in Rio Linda, Calif., outside Sacramento. She was the third oldest of four sisters and one brother and wanted to be a naturalist and archaeologist when she was in high school.

“She liked working with people,” Scully Edholm said. “She wanted to educate people about the natural world. One of the things she enjoyed was taking kids on nature walks; she really loved doing that.”

Scully graduated from Rio Linda High School in June 1969 and attended American River College before transferring to Sacramento State after two years. She received her bachelor’s degree in social science and archaeology in January 1974.

Late that year, she graduated from the Parks and Recreation Academy after six weeks of training. She was one of two female cadet graduates.

Joanne Ciccone was her roommate during training and worked as a peace officer for 12 years.

“She was very focused, kind (and) confident,” Ciccone said. “I’m 62; she’s my age, too. Now, she never lived this life I lived just from somebody messing around in a car.”

The accident took place on the afternoon of May 6, 1976. She was on patrol and driving just north of La Honda Road when a car driven by 19-year-old Manuel Santos Fernandez Jr. of Redwood City went out of control, skidded 119 feet, flipped over and hit Scully’s truck head-on.

Beer cans were found in Fernandez’s car and he had consumed marijuana just before or during the drive, Tom Scully says. But he thinks it is a misconception that his sister was killed by a drunken driver. Rather, Fernandez was going 80 mph at the time of the accident in an attempt at going airborne so he could launch the car over the hill, as a friend of the passengers later testified.

Scully’s car was knocked off the highway and down an embankment. State Parks Ranger William Walling witnessed the accident, according to a California Highway Patrol report written about the incident, and carried Scully up the embankment with the help of firemen from the Pescadero station. Scully was taken to Chope Community Hospital in San Mateo, where she was pronounced dead.

“I was at Will Rogers (State Historic Park) in Los Angeles taking down the flag when (co-workers) came out and told me,” Ciccone said. “It was so heartbreaking seeing others killed on the coast highway and (I remember thinking), ‘It took another one.’”

Fernandez was charged with felony vehicular manslaughter, and his defense attorney alleged that the Corvair he was driving was defective, like those detailed in Ralph Nader’s 1965 book “Unsafe At Any Speed.”

Fernandez was convicted and sentenced to one year in jail. He served 10 months.

“Our family went, ‘Wow, one year in jail? Our sister is gone forever,’” Tom Scully said. “His attitude was, ‘This is no big deal. This young woman died, so what?’”

Scully’s family filed a civil suit against Fernandez. After the attorney they hired dropped out of the case, Tom Scully, a firefighter, took the case.

“I was determined,” he said. “I stood up and defended my family, questioned him on the stand, questioned my dad and asked, ‘What did Patty mean to you?’”

A judge awarded Scully’s family $25,000, the lowest amount possible because the judge anticipated they wouldn’t receive any of the money, given how little money Fernandez made as a dishwasher. The Scully family never received any amount of the settlement, and Tom Scully does not know where Fernandez is today.

“(The settlement) is water under the bridge,” Tom Scully said. “I don’t know where he is, whether he’s alive or dead. Maybe he came out a better man. I hope so.”

At last week’s ceremony, Tom and his sister Mary and her husband sat beside Supervisor Don Horsley in the front row, listening as Horsley, Lyons and others spoke about the important role Patricia Scully played in her short time on the Coastside. Tom Scully stood at the podium and talked about how he and his siblings “always looked to her and up to her” and spoke appreciatively of the recognition of his sister.