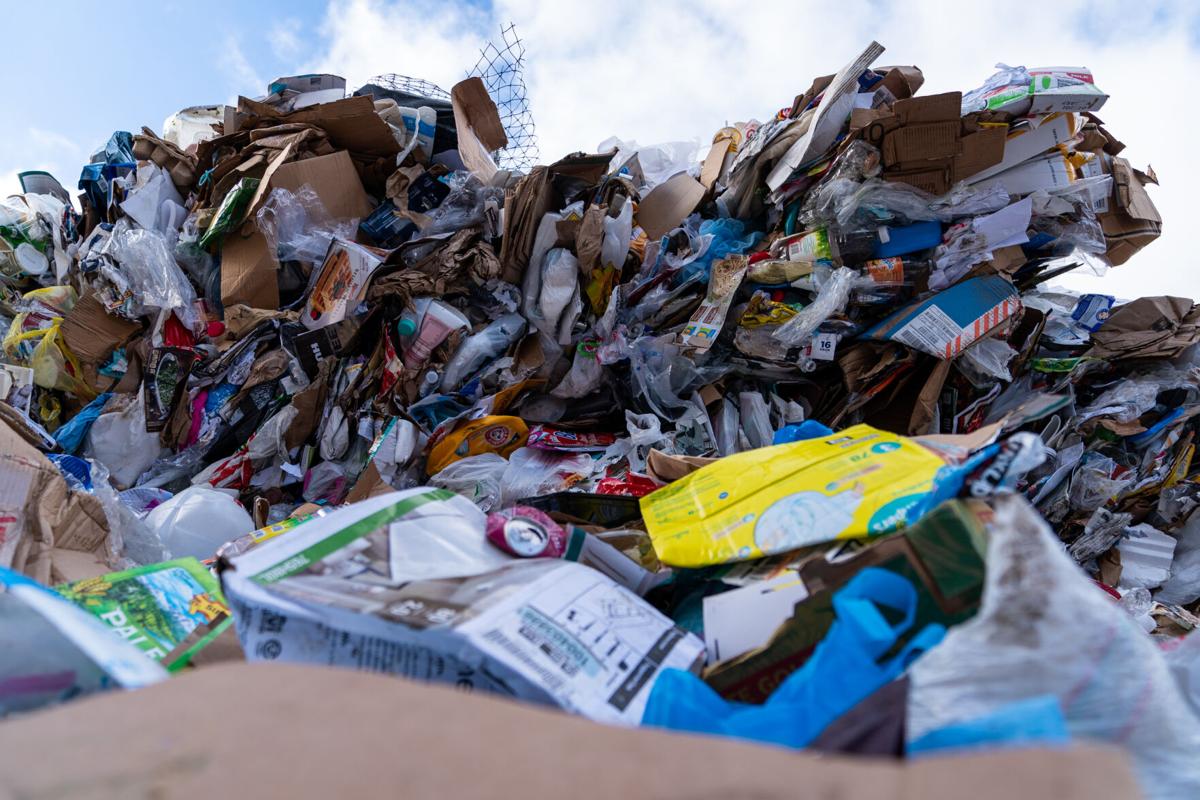 A pile of recycling to be shipped off to sorting at Ox Mountain Landfill in Half Moon Bay on Monday, Nov. 23, 2020 in Half. Adam Pardee / Review 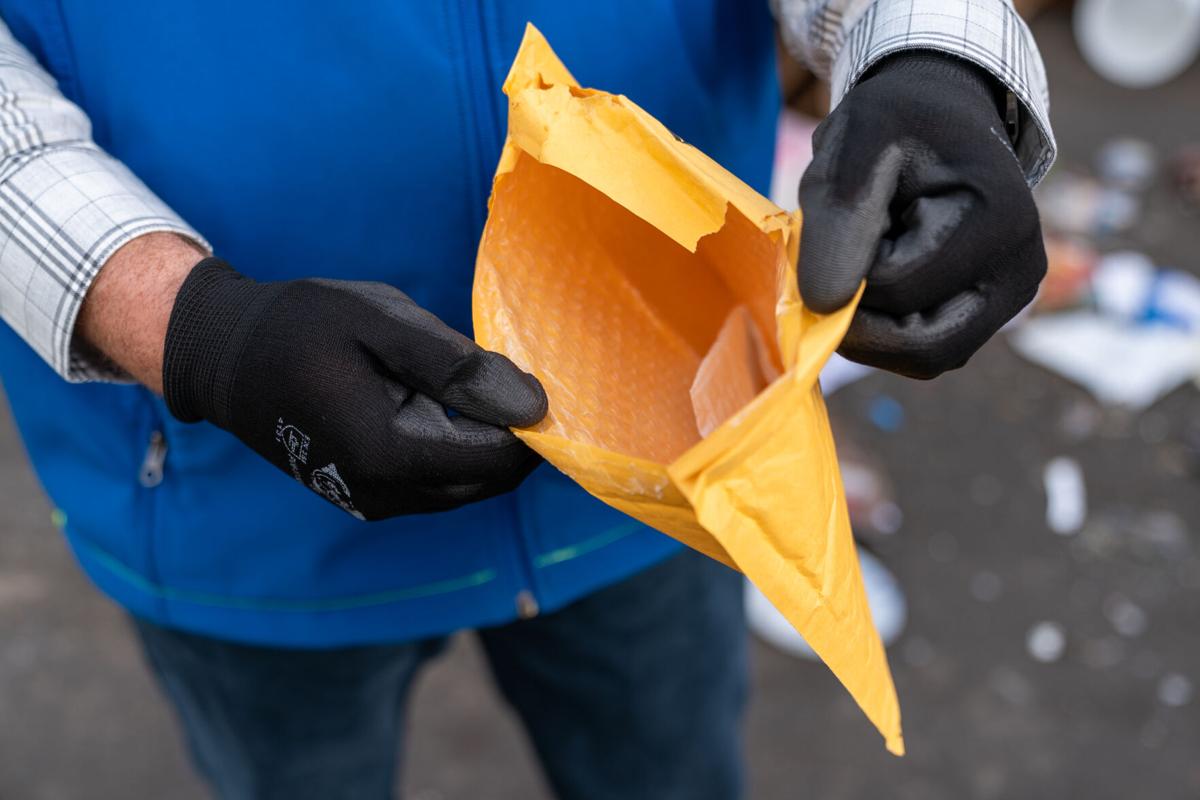 Plastic and paper are both easily recyclable, but when they are glued together in shipping packages they become non-recyclable like this one at Ox Mountain Landfill in Half Moon Bay on Monday, Nov. 23, 2020. Adam Pardee / Review 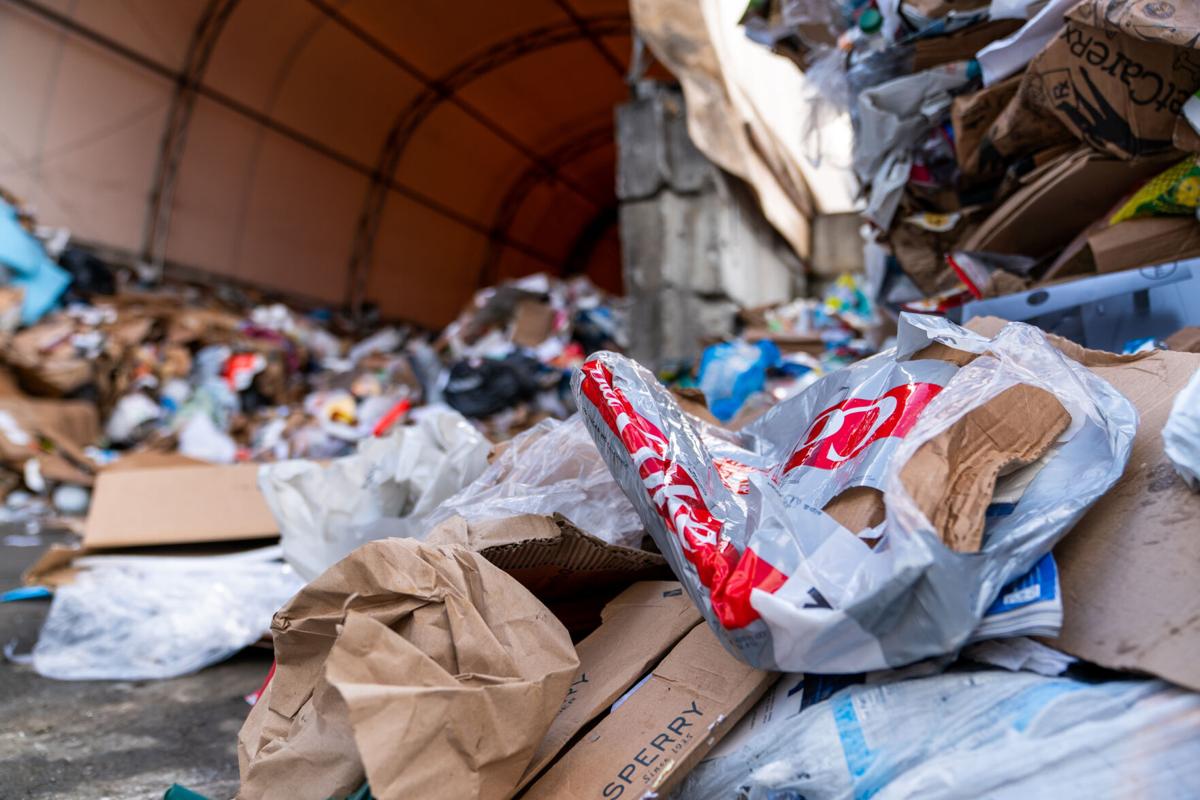 Mixed recyclables are hard to sort and recycle if paper and plastic are not separated like this soda container at Ox Mountain Landfill in Half Moon Bay on Monday, Nov. 23, 2020. Adam Pardee / Review 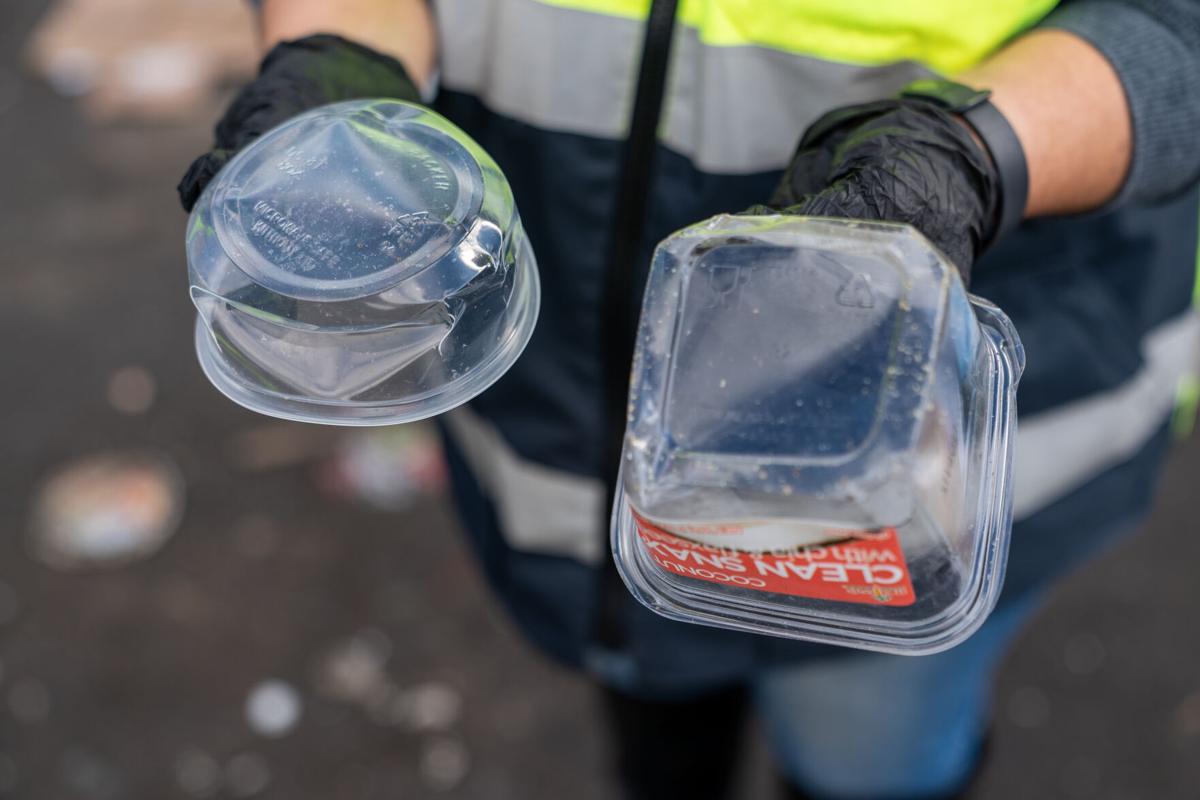 Different types of plastics are easier than others to recycle like these two containers that are two different types at Ox Mountain Landfill in Half Moon bay on Monday, Nov. 23, 2020. Adam Pardee / Review

A pile of recycling to be shipped off to sorting at Ox Mountain Landfill in Half Moon Bay on Monday, Nov. 23, 2020 in Half. Adam Pardee / Review

On a recent Monday morning in November, the city of Half Moon Bay’s collection service unloaded a pile of recyclable waste large enough to fit in three outdoor sheds. Among the heap were granola bar wrappers, a container of hummus and a bubble mailer bag — none of which were recyclable but ended up in curbside blue bins that morning.

If possible, machine sorters will identify the nonrecyclable items as such and sort them into a bin destined for the landfill. But city collection service provider Republic Services has found that many end up getting improperly sorted, jamming machines and jeopardizing recyclers’ ability to sell the processed recycling.

Contamination, or the mixing of non-recyclables with recyclables, has been a growing problem for companies like Republic since manufacturers and shipping services turned to cheaper but less recyclable means to package their products. But the pandemic has been an exacerbating force: Republic has seen more contamination as more people produce more waste at home. This comes at a time when staff had to sideline some of the education programs to abide by the shelter-in-place orders.

Residential recycling in Half Moon Bay has increased 13 percent from this time last year. And without knowing whether the rate of contamination has increased (a new study will be done in early 2021), if the city’s last recorded contamination rate — 21 percent — holds true, that could mean as much as 32 additional tons of improperly recycled trash. That’s enough to fill four small dump trucks.

Nonrecyclable items that end up in recycling streams have led to slowdowns as sorters have to be halted and sorting facilities shut down for workers to manually remove contaminants. When this happens, whole batches of sorted material have to be thrown into the landfill.

Contamination also makes it difficult for services like Republic to sell their processed recyclables.

“It’s a commodity,” said Travis Armstrong, Republic’s San Mateo County general manager. “There’s a market for some of these items.”

The cleaner the items are when they reach Republic, the higher the chances the company has to sell the sorted material.

After Republic collects recycling from residences, it is dropped off at an area separate from the actual landfill at the Ox Mountain Landfill property. It is then delivered to Newby Island Resource Recovery Park in San Jose, where it is ultimately sorted using an automated process. A recycling machine is lined with camera lenses that characterize the recycled materials, which enter the sorter on a high-speed conveyor belt. Depending on the material type, air nodules aim strong air at the item, shooting it into the proper bin.

However, the optical sorter can be easily disoriented. Water or food residue on plastic makes it difficult for the machine to determine the correct plastic grade. Boxes stuffed with foam or paper packages lined with bubble wrap can be equally confusing because the machine will recognize the exterior and sort them as cardboard and paper without sensing contaminating materials inside.

“Certainly some things are easy. Recyclable bottles, newspaper, cardboard — of course. But there are all these things in the middle. You don’t know where to put it,” said resident Dan Haggerty at the Nov. 17 City Council meeting where Republic gave a presentation. “Nobody has time to think about it. They just give up and they throw it wherever.”

Monica Devincenzi, a municipal relationships manager at Republic, said residents are increasingly prone to mistakes because companies are creating products that mix recyclable and nonrecyclable materials. For example, non-refrigerated cartons of milk or broth often have spouts lined with aluminum, which actually make the products nonrecyclable. And there are many products that deceptively label products with the triangular-shaped recycling symbol even though they’re not recyclable. This is especially common with plastics, which continue to be a major contaminant in Republic’s recycling program.

Film plastics like those stretched across soda cartons sold by the dozen are mistakenly thrown in the recycling bin, as are grocery bags and flimsy takeout food containers.

Republic had a slew of events and workshops planned for the year, as mandated by its contract with the city of Half Moon Bay, but the pandemic made it impossible to conduct them in person.

Armstrong recognized how much effort is required by individuals when manufacturers also play a big role in making products easier to recycle.

Here is the full color brochure we get every year from recology of the Coast: https://41k4p01v6nzq13r4y42jb9xv-wpengine.netdna-ssl.com/wp-content/uploads/2020/01/MONTARA-2020.pdf it explains everything, so we can be good citizens and wash our plastic food containers and properly separate or exclude what doesn't belong in the Blue Bin. Years back, we used to have to sort glass, plastic and paper into three separate bins.

GOLLY WE GET ONE OF THESE HANDY REFERENCE CHARTS EVERY YEAR FROM RECOLOGY OF THE COAST IN FULL COLOR... OH WAIT THE REVIEW WO NT LET ME POST THE IMAGE.HERE. WE ALSO GET 4QUARTERLY RECYCLE DAYS FOR geTTING RID OF MISCELANEOUS STUFF LIKE FURNITURE AND NON-WORKING APPLIANCES

Regarding Replublic Serves comment on recycling materials in the wrong bin. I have tried more than once to get a list by item what bin to put things in, per their customer service and their web site, this list does not exist. Isn’t it about time someone sat down compiled a list of the 100 or so items that end up in the wrong container. It would sure go a long way in eliminating much of the problem they are experiencing. Put the top 20 of which items go were and create decals for the proper bin, both acceptable and not allowed.

Everything needs to be simple so customers can understand what is required. The old KISS method.

Cameras to be installed at HMB skatepark

Water polo players never out of their depth, at least in own pool

As the statewide drought continues, the Coastside County Water District is exploring how to …

As the sun set on Thursday evening at the Half Moon Bay Odd Fellows Cemetery, members gather…

It’s been a stunningly dry year across California, so when the skies poured rain across the …

Who would have thought that real estate would take off in the middle of a pandemic?

Man gets 24 years for death of HMB resident