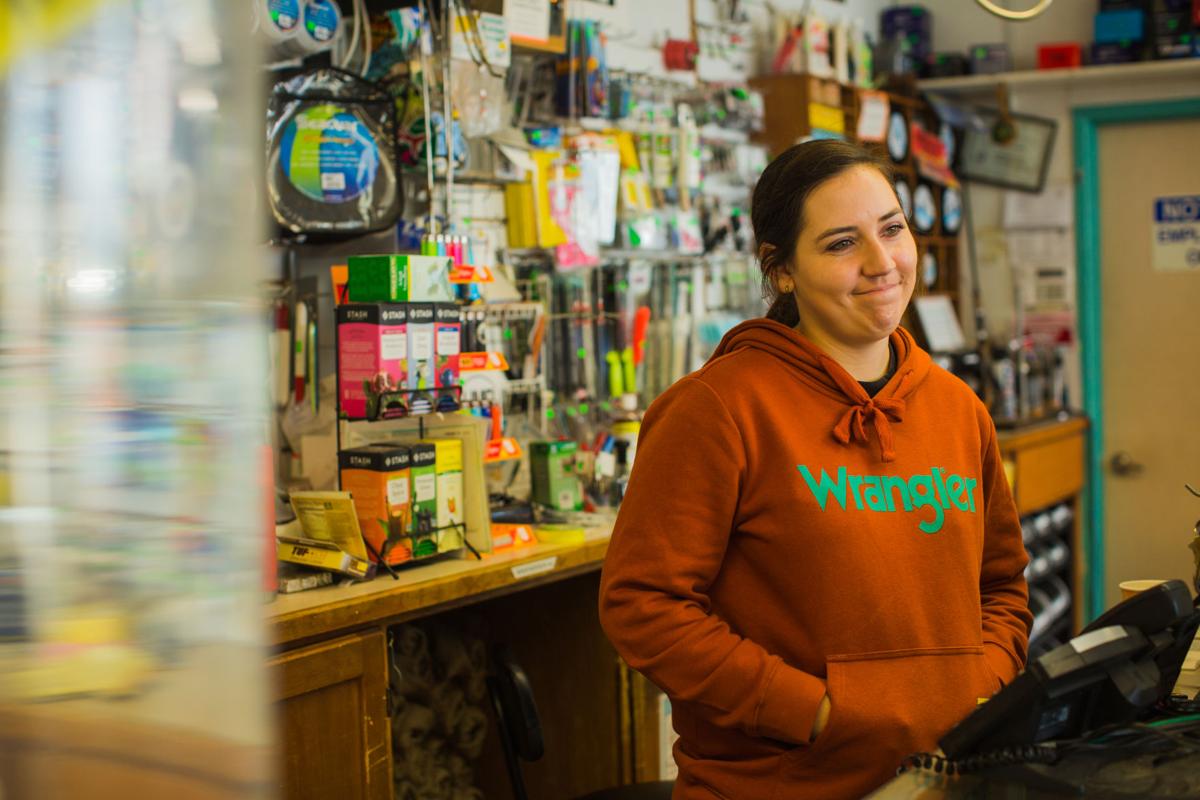 Stephanie Meza works two jobs, including one with a Pillar Point Harbor boat captain, in order to afford and qualify to live in a recreational vehicle at the harbor. Now those rules are changing. Kent Hwang/ Review 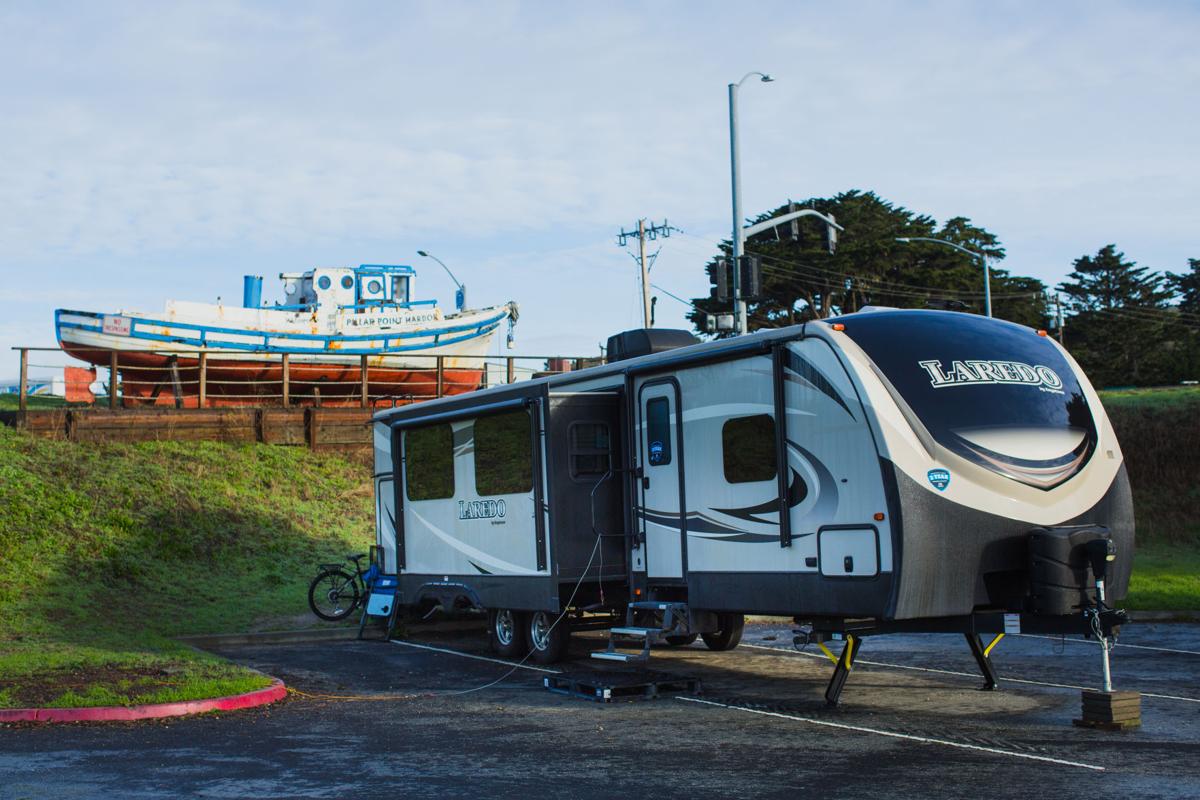 The San Mateo Harbor District — spurred by a complaint to the California Coastal Commission — is looking to rein in use of recreational vehicles at the harbor parking lots. Kent Hwang/ Review

Stephanie Meza works two jobs, including one with a Pillar Point Harbor boat captain, in order to afford and qualify to live in a recreational vehicle at the harbor. Now those rules are changing. Kent Hwang/ Review

The San Mateo Harbor District — spurred by a complaint to the California Coastal Commission — is looking to rein in use of recreational vehicles at the harbor parking lots. Kent Hwang/ Review

Stephanie Meza moved into a recreational vehicle a few months ago because she could no longer afford to live in Half Moon Bay. She got a part-time job with a boat captain in addition to her other job working at a bait shop at Pillar Point Harbor so she could park the RV in one of the harbor’s parking lots.

However, in than less six weeks, Meza will have to relocate because the San Mateo County Harbor District is issuing notices to vacate to anyone who has a recreational vehicle parked at Pillar Point Harbor. Last month, San Mateo County officials contacted colleagues at the Harbor District informing them they were violating certain zoning ordinances by allowing RVs to be parked at the harbor.

“I am worried about where I am going to go next,” Meza said. “I’ve applied for a few other jobs so I can afford to move to another RV park.”

For as long as anyone can remember, RVs were parking in the C Lot at the Pillar Point Harbor. It offered a space for fishermen and other people who had boats at the harbor to stay during peak seasons. During crab and salmon season the lot is often filled with RVs.

“I think what has happened is there was a slow evolution on how the parking lot was being used,” San Mateo County Planning and Building Director Steve Monowitz said. “It’s intended to serve the boating and fishing community.”

Monowitz said over time the parking lot became something of an RV park. The California Coastal Commission finally received a complaint.

“If you are using a parking lot for a purpose other than fishing needs, it is a change of use,” he said.

On Dec. 11, 2019, the district received a letter from San Mateo County Planning and Building officials stating it was violating zoning ordinances by operating an RV park in a parking lot. The parking lot does not offer any services, such as a restroom facility, RV hookups, or a way to properly dispose of sewage and waste.

The Harbor District has collected revenue from people parking overnight. In fiscal year 2018-2019, the district collected $86,193 from tenants who parked in the lot.

If the district continues to operate as an RV park past March 1, the county will impose a penalty, according to Harbor District General Manager Jim Pruett.

At the district’s board meeting on Jan. 15, commissioners voted 3-1 to seek a Coastal Development Permit to establish an RV park at the harbor to allow it to adhere to the county’s ordinances. Harbor Commissioner Sabrina Brennan was absent from the meeting and did not vote.

“I was in utter shock when I saw this. People plan their vacations on being able to come to the coast and stay here,” Commissioner Tom Mattusch said. “We cannot be blocking people. I can’t believe the county would come up with something like this.”

Not all commissioners were in favor of continuing to offer the lot to RVs. Commissioner Edmundo Larenas said this is a legacy problem for the district.

“We are a Harbor District, not an RV district,” he said. “We have a traffic and parking problem. In the early days we did not have the population problem that we do now. Now there are a lot more people coming to the Coastside to recreate. This lot can be used for parking.”

Larenas, who also is affiliated with Surfrider Foundation, said the nonprofit found a correlation between a high spike of bacteria in the water at the harbor and waste dumped from RV users.

Currently, there is an established RV park next to the harbor near Surfer’s Beach operated by Keet Nerhan. The park offers 49 RV hookups. There is also a proposal from Nerhan and Ron Stefanick to create another RV park just across Capistrano Road.

The proposed RV park would offer 50 spaces and seven tent camping spaces on a three-acre parcel. The park would include a laundry room and restroom. The project is still in the early stages and some design changes are being considered, according to Monowitz.

Meanwhile, some fishermen are worried this will impact their business and ability to work out of Pillar Point Harbor. Many come from cities miles away and rely on their RVs while fishing season is open.

Pruett said he has given verbal notice to the people who have RVs in the lot and will work with them to move them in advance of the county’s deadline.

Larenas is the prototypical coastal "elite" environmenalist. He has his but you cannot have yours.

Really sad to see someone with no sympathy for people in a tough spot.

People who drag boats from Modesto with an RV so as to go fishing are not in a tough spot.

Mattusch instigated the chain of events that led to Keet Nerhan being forced to obtain a CDP yet is outraged that the Harbor District is held to the same standard.

Considering the cost of housing, rentals and home ownership especially, why is it that the ostrich bureaucrats of San Mateo County can't wake up to the fact that RV parks can solve many aspects of this problem? Low wage earners, retired people (like me), "solvent" homeless people, seasonal workers, etc. would all benefit from having a space to live. Obviously, acquiring the land would be the biggest expense. People with deep pockets like Keet could also afford the expense for improvements: waste disposal, showers, laundry rooms and the like could help out a lot of people. The parks wouldn't have to look like the monstrosity in Moss Beach. Landscaping, community gardens would be nice, but considering the NIMBYs and other complainers in abundance, the prospects aren't especially bright.

"Currently, there is an established RV park next to the harbor near Surfer’s Beach operated by Keet Nerhan. The park offers 49 RV hookups."

I guess the fact that Keet's RV lot has been operating for two decades without a CDP is not a factoid relevant to this story about the RV Lot without a CDP right next door, story.

“I was in utter shock when I saw this. People plan their vacations on being able to come to the coast and stay here,” Commissioner Tom Mattusch said. “We cannot be blocking people. I can’t believe the county would come up with something like this.”

This from the same man who encouraged others to go after Keet Nerhan's non CDP Permitted RV Lot.