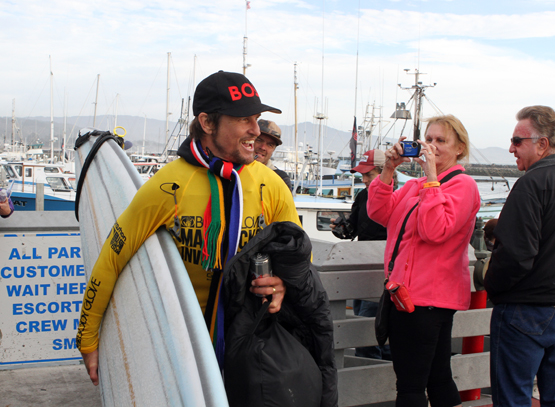 Grant "Twiggy" Baker gets ready to greet people after winning the Mavericks Invitational Surf Contest, Friday. It's the second time the South African won the contest. 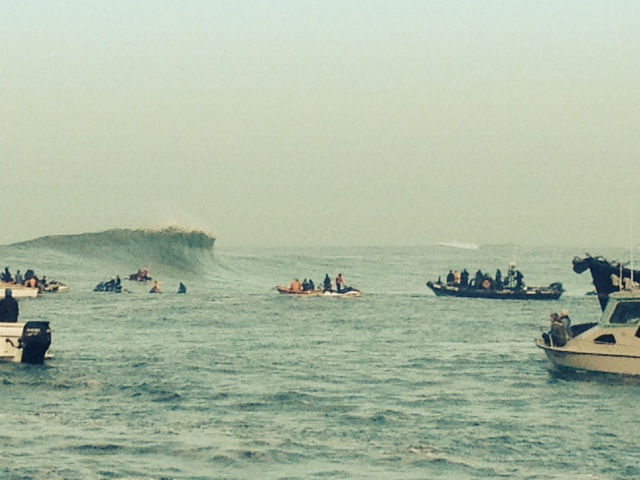 Surfers were in the water for the early heats of Mavericks Invitational Surf Contest at 9 a.m. on Friday. 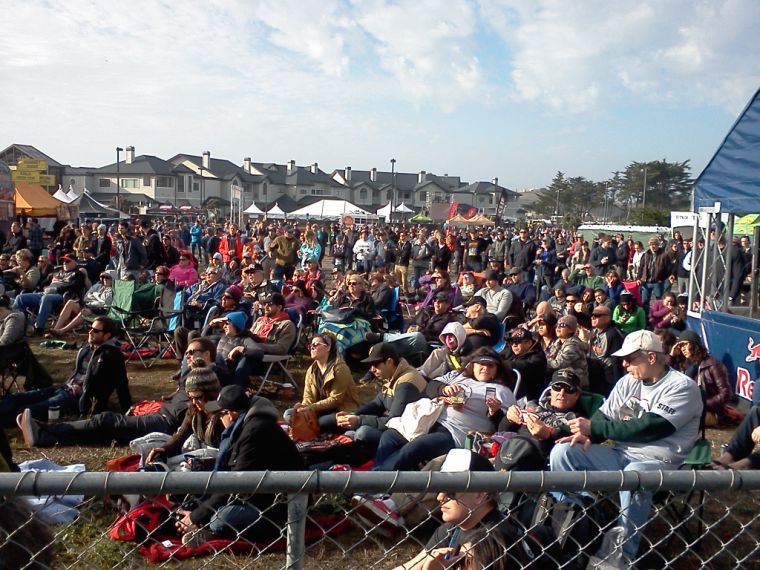 A big crowd was gathering at the Mavericks Invitational Surf Contest to watch the semifinals outside of Pillar Point Harbor. Mark Noack / Review 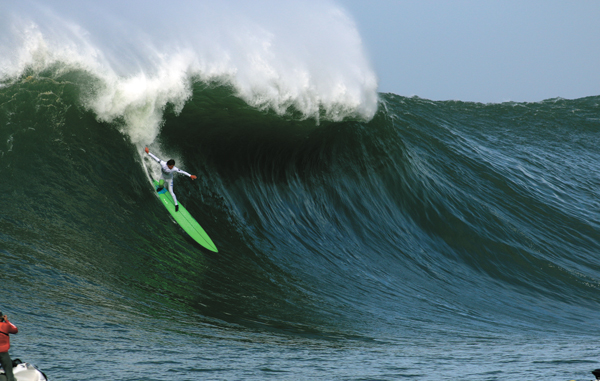 Competitor Nic Lamb drops into a wave during Heat 3 of the Mavericks Invitational surf contest on Friday. Dean Coppola / Review 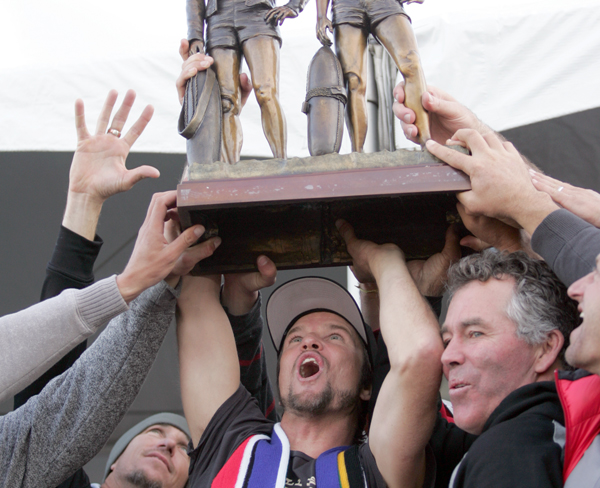 Grant "Twiggy" Baker gets ready to greet people after winning the Mavericks Invitational Surf Contest, Friday. It's the second time the South African won the contest.

Surfers were in the water for the early heats of Mavericks Invitational Surf Contest at 9 a.m. on Friday.

A big crowd was gathering at the Mavericks Invitational Surf Contest to watch the semifinals outside of Pillar Point Harbor. Mark Noack / Review

Competitor Nic Lamb drops into a wave during Heat 3 of the Mavericks Invitational surf contest on Friday. Dean Coppola / Review

Baker won the contest in 2006 and is leading the Big Wave World Tour this year after a previous victory in Spain earlier this season.

Update: 1:30 p.m.: The final heat will pit Kenny “Skindog” Collins, Tyler Fox, Anthony Tashnick, Grant Long, Shane Dorian and Grant Baker after a full day of surfing 20-foot-plus wave faces at the Mavericks Invitational Surf Contest. The final heat is due to go off at 1:30 p.m.

There has been some epic hard charging, including a long drop by Dorian in the last semifinal that announcers said may have been the biggest of the day.

Things have gone much more smoothly at the viewing festival this year than last. There have been no long lines and traffic on the coast has been largely unremarkable so far. That may change when fans leave this afternoon.

Power was out briefly at the Oceano Hotel and Spa, site of the festival, but that appears to have been corrected. The live stream of the contest has had sporadic technical difficulties but by and large perfect weather has created a memorable day at Pillar Point.

Update: 12:45 p.m.: Power is out at the Oceano Hotel and Spa as well as Harbor Village. Generators are powering the infrastructure for the Mavericks viewing festival and the hotel but Harbor Village is without power at the moment.

An Oceano official confirmed that power is out at the buildings. He said the generators would assure power throughout the surfing event, but Harbor Village is dark.

On the water, the second semifinal is underway. Breeze has shifted to the south and southwest, creating more chop.

Update 12:17 p.m.: At the end of the first semifinal, it’s Ken Collins, Tyler Fox and Anthony Tashnick moving on to the final. Fox mastered one of the biggest waves of the day to take a spot toward the end of the heat.

The crowd continues to build at the viewing festival as spectators are drawn to the image of 20- to 40-foot faces.

Update 11:45: Correction: It's Ryan Seelbach in the semi instead of Colin Dwyer. So Tashnick, Augenstein, Collins, Fox, Seelbach and Mel in semifinal 1.

Update 11:25 a.m. Heat 4 is over and the semifinals are set. Shawn Dollar, Grant “Twiggy” Baker and Kohl Christensen have advanced to the second semifinal. They will join Greg Long, Zach Wormhoudt and Shane Dorian in the next round.

The first semi will feature Heat 1 leaders Anthony Tashnick, Ryan Augenstein and Kenny Collins and Heat 2 winners Tyler Fox, Colin Dwyer and Peter Mel. The last heat is scheduled to go off at about 1:30 p.m.

Meanwhile, the video feed has been fickle, both at the viewing festival and online. Red Bull TV lost it for about five minutes just at the conclusion of Heat 4. Our reporters on the ground report that there have been a few requests for refunds from some unhappy patrons at the festival.

10:45 a.m. update: Heat 3 is over and Greg Long, Shane Dorian and Zach Wormhoudt climbed their way over the watery mountains at the Mavericks Invitational Surf Contest on Friday morning. They join Anthony Tashnick, Ryan Augenstein and Kenny Collins from the first heat and Peter Mel, Tyler Fox and Colin Dwyer in the second heat for places in the next round.

An update on the pedestrian who was struck earlier this morning: It occurred at about 6:30 a.m., when it was still dark. California Highway Patrol officials say the incident at Capistrano Road and Highway 1 resulted in only minor injuries and that the driver of the SUV involved in the crash was cooperative and that there was no drugs or alcohol involved.

Meanwhile, spectators are still streaming into the viewing festival. Volunteers are still selling tickets and organizers are expecting many more people to arrive later in the afternoon, spectators who have already purchased tickets.

Volunteers report that a few of the thousands of people in attendance have asked for their money back due to audio-visual problems with the live streaming feed. By and large, however, the video is working well on two jumbotron screens.

9 a.m.: Heat 2 is over at the Mavericks Invitational Surf Contest in early action off Pillar Point on Friday. The waves were huge and the weather perfect.

Surfers were charging waves with faces of 40 feet or better.

There was one public safety incident early Friday morning. A pedestrian was struck in the vicinity of Capistrano Road and Highway 1 at about 7:30 a.m. The pedestrian was taken to an area hospital and the condition of the victim was not immediately known.