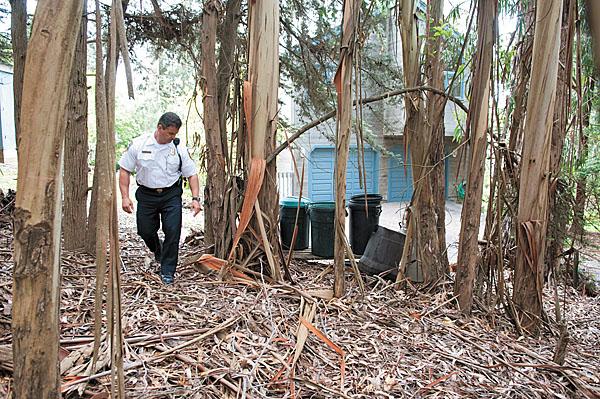 Paul Cole, assistant chief for the Coastside Fire Protection District, inspects brush and leaves that he says have built up for about 15 years near homes in El Granada. He and other fire officials point to extreme fire danger in the hills along the Coastside. 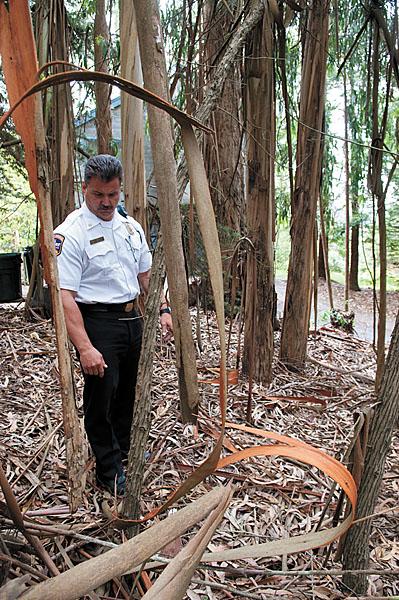 Paul Cole, assistant chief for the Coastside Fire Protection District, says the build up of tinder-dry leaves and bark creates a serious fire hazard on the coast.
1 of 2

Paul Cole, assistant chief for the Coastside Fire Protection District, inspects brush and leaves that he says have built up for about 15 years near homes in El Granada. He and other fire officials point to extreme fire danger in the hills along the Coastside.

Paul Cole, assistant chief for the Coastside Fire Protection District, says the build up of tinder-dry leaves and bark creates a serious fire hazard on the coast.

The breathtaking vistas of Pillar Point Harbor and the ocean beyond, as seen from the El Granada highlands, are lost on Paul Cole this time of year. Eyeing the ground and the trees, Cole sees “a recipe for disaster.”

Winding through the hills on a muggy Monday morning in May, the Coastside Fire Protection District assistant chief paints an alarming portrait of the risk to homes on the fringes of the forest. If fire were to ignite, he says, 15 years of ground debris and “ladder fuels” would carry the flames along the woodland floor and into the canopy.

“Then we’d have a serious problem. All this needs to be dealt with,” says Cole, sweeping his arm across a wooded corridor of towering eucalyptus stalks that engulfs a neighborhood near Santiago Street.

The heart of fire season is weeks away, but blazes already tearing through parts of Southern California are causing Coastside firefighters to ramp up prevention efforts like never before.

The first step, they say, is creating "defensible space" around fire prone homes – those bordering the wildland interface. Beginning Monday, a hand crew is undertaking a three-week project to reduce fuel loads on Coral Reef Avenue in El Granada. Coordinators say they hope the "demonstration" sets an example of precaution they’d like homeowners to follow.

“Most (homeowners) will have to pay to do it themselves, but this is to show them how easily it can be done and how good the property looks after they do it,” said Rich Samson, CalFire division chief in charge of resource management for San Mateo and Santa Cruz counties.

The Coral Reef endeavor stems from collaboration among landowners, firefighters and the county, and it’s the first step in developing a Community Wildfire Protection Plan. The plan will provide a cohesive overview of the threat residents face, and outline steps they can take to reduce it. Kellyx Nelson estimates the plan, which will serve San Mateo and Santa Cruz counties, will take about one year to develop.

“We want to document lessons learned (from the Coral Reef project) and share those with the community,” said Nelson, executive director for the county Resource Conservation District.

Earlier this year the district mailed fire safety brochures to residents in the outskirts of Montara, Moss Beach and El Granada. CalFire marks these areas, and some others up and down the coast, “high” and “very high” hazard zones. The brochures are a way to educate people of the dangers of neglecting flammable debris in, around and on top of their homes.

“All that debris in the yard or on the roof and gutter is a receptive fuel bed for an ember. All it takes is one ember to fall in there and it can go to town,” said San Mateo County Fire Marshal Clayton Jolley.

Firefighters are reaching out to residents with a sense of urgency this year, in part, Jolley says, because of an above-average level of fire danger in Northern California noted in an annual report from the National Interagency Fire Center in Boise, Idaho.

Having reviewed a century’s worth of newspapers last fall, Cole and Jolley unearthed coverage on a handful of wildfire blazes that swept the coast during the 20th century. Cole says he was shocked at the catastrophic damage to homes in a fire that ate through 3,400 acres of Montara in 1929. Other fires reportedly torched hundreds of acres of El Granada and wild land east of Half Moon Bay, as recently as 1955.

“That proves it can burn,” said Cole, shooting down what he calls a misconception about the region. “People think that, because of the fog, fires don’t happen here. Now we know that’s not true.”

Cole and his colleagues anticipating a rough summer.

“The likelihood of a fire getting larger just increases” with each passing dry year, said John Ferreira, CalFire unit chief for San Mateo and Santa Cruz counties. “In the six years that I’ve been here this is probably the lowest live fuel moisture levels that we’ve seen.”

Last year was dry, he said, but vegetation in Ferreira’s jurisdiction held near average amounts of water. A monthly test conducted earlier in May revealed moisture levels about 15 percent below normal on the Coastside and further south .

Short of summoning rain to wash away the worry, Coastside firefighters say they’re doing all they can to mitigate the fire risk. Apart from the Coral Reef project, firefighters are working to get the county, the California Coastal Commission, the city of Half Moon Bay and the community at large on the same page with enforcement of a defensible space rule.

All homeowners are required to maintain a 100-foot buffer of defensible space around their property lines, a regulation firefighters and homeowners have loosely observed in recent years, Coastside Fire Protection District President Gary Burke says.

To foster compliance among residents, the fire district passed an ordinance this year granting firefighters authority to cite people who aren’t keeping with the rules. But before they begin inspecting properties and writing tickets, the county and city of Half Moon Bay must adopt the ordinance as well. Cole said he expects approval soon, and once it comes, firefighters will canvass the neighborhoods, talk to property owners and coordinate community-wide initiatives to cut down the fuel loads.

Coral Reef resident Scott Kalkin says it’s about time. Occupying a seat on the Princeton-by-the-Sea Homeowners Association board of directors, Kalkin says he and his neighbors are adamant about cleaning up the heaping fuel beds behind their homes, and have been for years. Their efforts to coordinate with the larger landowners, he says, have been stifled by “roadblocks of bureaucracy.”

“In this community I think people are very generally willing to pitch in and help out where it needs to be done,” Kalkin says. “I think most understand that this is a problem.”

That’s good news for Cole, who says the only way to ensure that all homes are safe is for everyone to pitch in and do their part – sooner rather than later.

"We’re asking everyone to take ownership of our community, and if you see anything that looks strange, please call us and we can do something to look into these matters,” Cole said. “It’s the community effort that we’re looking for here."