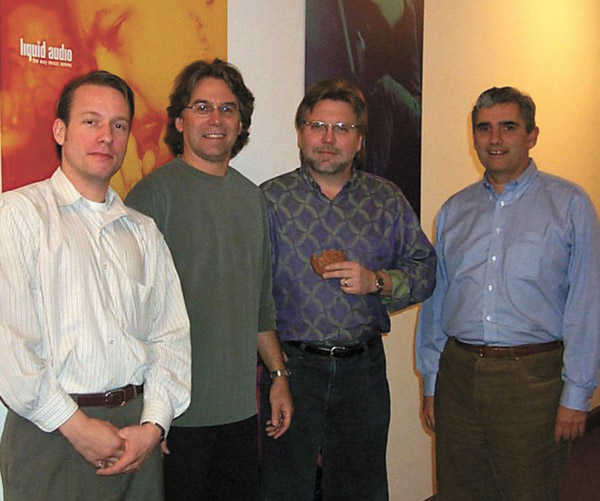 Gerald Kearby poses with with other members of the Liquid Audio team. 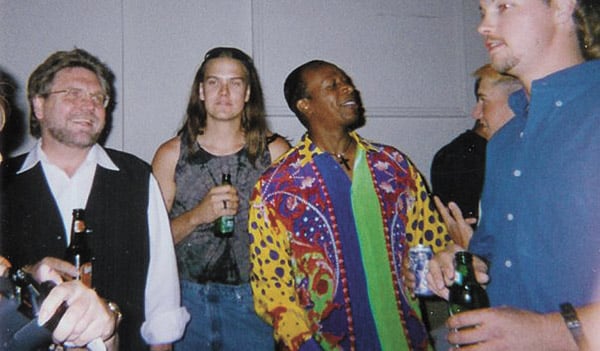 This photo was taken of Gerry Kirby with his nephews and pop star MC Hammer. Friends of Kearby have set up a memorial website for colleagues to share stories at www.gerrykearby.com.

Gerald Kearby poses with with other members of the Liquid Audio team.

This photo was taken of Gerry Kirby with his nephews and pop star MC Hammer. Friends of Kearby have set up a memorial website for colleagues to share stories at www.gerrykearby.com.

Always a percussionist at heart, Gerald Kearby ended up leaving his drums and instead set the tempo for the entire music industry as it stepped into the Internet Age.

The 65-year-old Loma Mar resident, who died in a car crash last week, is remembered as a creative powerhouse who laid the groundwork for online music sales while protecting artists’ rights. Known as a talented audio engineer and a natural businessman, Kearby founded a string of audio and tech companies and helped develop hundreds of patents.

Friends and associates remember him as an outsized personality, a person who could command respect but was surprisingly quick to laugh at himself.

“He had the most infallibly sound business sense of anyone I ever knew,” said Dan Lorimer, a colleague for more than 30 years. “The way he built relationships and his life had a certain integrity to it — you just could not fail to respect this guy.”

“He was sort of an amalgam of John Wayne, Hunter S. Thompson, Steve Jobs and Kris Kristofferson,” said Rob Modeste, a longtime business partner. “He was charming, irreverent and he had many moments of being insightful.”

It was a surprising life story for an Oklahoma native who left his hometown to join the U.S. Marine Corps. Kearby’s talent for performing music brought him into the elite Marine Band at the White House during the Nixon administration. He later joked to friends he was part of another elite group — the few who had urinated on the White House lawn.

After he left the military, he packed up his life and moved to the West Coast, where he became intimately involved with the burgeoning music scene. He launched his first company, Concert Music Design, to sell custom equipment to bands like The Grateful Dead and Jefferson Starship. His audio system cost a fraction of the price of larger established manufacturers at the time, and the Swiss company Studer eventually bought his startup.

Friends say Kearby wasn’t really an engineering whiz, but he had a knack for spotting a good idea and bringing together the talent and collaboration to make it happen. That’s exactly what happened in the late 1990s as Kearby became interested in the potential of how music could be remixed digitally.

As they began selling the idea to venture capitalists, Kearby realized he was neglecting the bigger picture — how digital music could be distributed through the Internet. That concept hooked investors, and Kearby found himself suddenly the chief executive of a fast-growing startup, Liquid Audio. He was hardly the only person with this idea, and plenty of other companies sprouted up around the same time in a race to create an online music marketplace.

Working out of a Redwood City office, Liquid Audio was literally next-door to its chief competitor, Napster. That company took a different tack by allowing music fans to trade songs for free without purchasing them, which alarmed artists and studios and prompted a series of lawsuits.

In contrast, Liquid Audio tried to be the “guys in the white hats,” according to Modeste, by providing a site for people to buy songs legally from the artists. The company signed deals with many of the major music labels, but the industry wouldn’t let the company touch their most lucrative bands and albums. Kearby continually pressured the industry to stop dragging its heels, and Sony CEO Al Smith gave him a backhanded response.

“He said, ‘My whole job is to keep you down and not let you be successful,’” Modeste recalled. “Gerry fought that one tooth and nail, but it was a telling phrase. In retrospect, maybe we shouldn’t have been the nice guy.”

Kearby testified before a U.S. Senate Judicial Committee hearing in 2001 to urge lawmakers and music executives to see the digital platform as inevitable.

“Consumers will embrace and pay for systems that are legitimate, easy to use, and reasonably priced,” he testified. “But that can’t happen unless all the music consumers want is made available.”

Liquid Audio ended up as collateral damage when the dot-com bubble burst. Scared investors lost trust in online startups, and larger established companies sensed an opportunity. Many employees remember a period in 2001 when Apple CEO Steve Jobs would regularly call Kearby every Saturday in hopes of buying Liquid Audio for $150 million. That offer infuriated Kearby because it was less than the company had in the bank.

Apple launched its own music marketplace through iTunes in 2004.

Liquid Audio ended up in worse straits, being bought by investors who only wanted to salvage the company’s $200 million savings. The patents were sold to Microsoft in 2002 for about $7 million, and Anderson Media, the digital-media arm for Walmart, ended up acquiring the company.

Kearby worked for a short period for Anderson, but he soon left to start on a final venture. Suffering from constant ringing in his ears, perhaps as a result of his years as a drummer, Kearby launched a software company, Neurotone, to provide a therapy regimen for people with similar conditions. The startup was a small five-person company, but it has promise to be used in auditory treatment worldwide, Modeste said.

“We’re going to continue going forward,” he said. “When Gerry believed in something, he didn’t do it in a half-hearted way.”

Friends of Gerry Kearby have set up a memorial website for colleagues to share stories at www.gerrykearby.com.

Updated 10:40 .m.: CalFire crews were mopping up a small fire in the Huddart Park area, just…

For the first time since the start of the COVID-19 pandemic, San Mateo County has moved to t…

Cities get on board efforts to reform public transit

High school welcomes back half of Cougars

Last month, stepping onto campus for the first time as a Half Moon Bay High School freshman,…

While Pacificans see light at end of tunnels...

When you ask a Montaran about the Devil’s Slide tunnels, they’ll tell you about the increase…