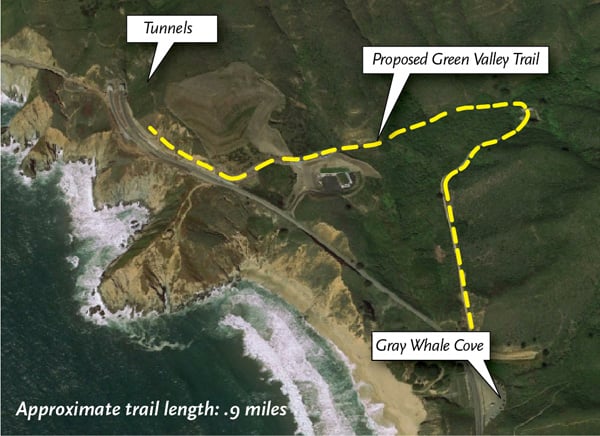 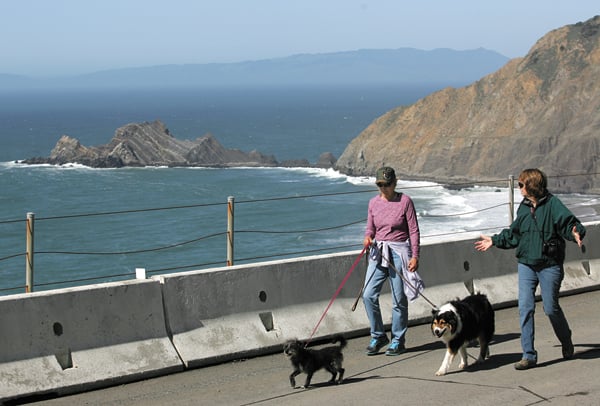 Jane Kikuchi, left, of Half Moon Bay, and Linda Steinhoff walk on the Devil’s Slide Trail on Monday as part of a preview tour. The actual opening date to the public has been delayed but is currently March 27. 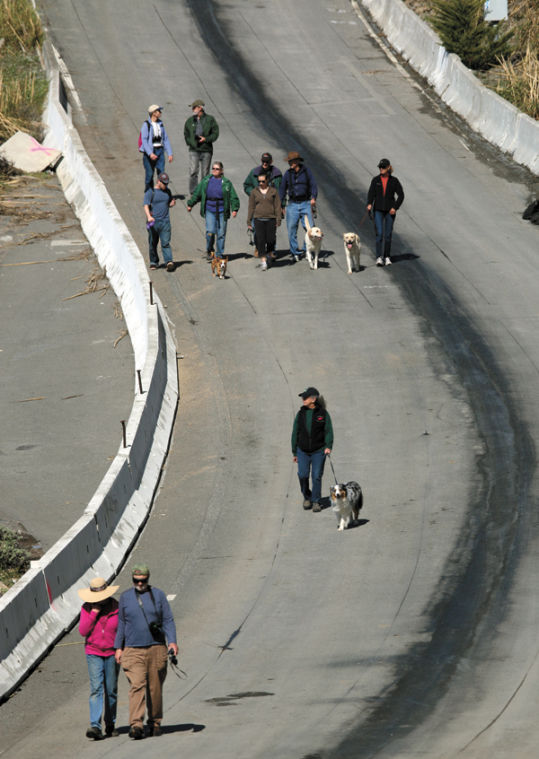 Jane Kikuchi, left, of Half Moon Bay, and Linda Steinhoff walk on the Devil’s Slide Trail on Monday as part of a preview tour. The actual opening date to the public has been delayed but is currently March 27.

The much-anticipated Devil’s Slide Trail set to open March 27 is expected to attract crowds of locals and out-of-towners alike who are eager to see the newest Bay Area recreational spot set against dramatic Pacific Ocean views.

It’s that expected influx of people — 80,000 people are expected to visit the new trail each year — that has some Coastsiders concerned about traffic congestion and pedestrian safety outside the trail itself.

“On the trail, people will get along fine, whereas (with) people outside the trail walking along and crossing the highway, there will be a much greater potential for problems,” said Pat Tierney, an El Granada resident who serves on the Midcoast Parks and Recreation Committee and is the chair and professor of the Department of Recreation, Parks and Tourism at San Francisco State University.

A task force created to explore the possibility of a trail at the old stretch of Highway 1 concluded that creating what was dubbed the Green Valley Trail, which would begin at the north end of the Gray Whale Cove parking lot and wind one mile through the hillside to end across from the Devil’s Slide Trail south portal parking lot, was necessary for visitors’ safety. That was because they anticipated that some would park at the beach in Montara and want to walk to the Devil’s Slide Trail from there, and the only alternative route isn’t one meant for pedestrians. It’s alongside Highway 1, which lacks a consistent shoulder.

“The Devil’s Slide task force convened for several years; they well understood they had to have a trail there,” said Coastside resident Len Erickson, who served on the task force.

But since then, the Green Valley Trail has remained a proposed route on a map, as San Mateo County Parks Director Marlene Finley said the department did not have the capacity to do both projects at once. Though it received a grant from the California Coastal Conservancy to plan and permit the Green Valley Trail, it still lacks the funds to construct it, making the earliest date it could open in 2016.

“Hopefully, everybody sees this as a benefit and are positive about this project so it will get the funding it needs,” Finley said. “There is no timeline, it’s so far out. It could be two years (until it opens).”

Tierney calls the Green Valley Trail the “missing piece” for visitors to get easier access to the Devil’s Slide Trail from Montara. He conducted a use assessment of Devil’s Slide Trail for the Coastal Conservancy in 2005, in which he concluded that people were excited about the trail, but there was the potential for issues with traffic and parking, visitor safety, littering and sanitation and overcrowding on the trail itself.

Currently, the first half-mile of the proposed Green Valley Trail, which is owned by California State Parks, serves as a road to get to a house on the hillside; near the house the trail ends. Finley said those who have tried to go further in the past have gotten covered in poison oak, and she does not recommend it as a route to Devil’s Slide Trail, nor does she advise visitors walk alongside Highway 1.

“People shouldn’t be walking on the highway where there isn’t a shoulder,” she said.

So how can people get to Devil’s Slide Trail? There are parking spots, 44 of them to be exact, which San Mateo County Supervisor Don Horsley said was the most that design plans could allow.

“There was no way we could turn the old roadway into parking without damaging its value as a trail,” Horsley said. “We built all the parking we could, but we recognize it’s probably not going to be enough.”

Tierney says that while the 44 spots between the north and south portal lots are more than he expected, they will not meet demand.

“There is not enough parking,” he said. “Even if you take into consideration all the parking at Montara State Beach it will already be full … I think the shuttle alternative is good.”

SamTrans spokesperson Christine Dunn says Route 17, which runs from Pescadero to Pacifica seven days a week, will have regular stops at the trail’s south portal entry.

The city of Pacifica has a free weekend shuttle from 8 a.m. to 5 p.m. that will stop at the north portal parking lot of the trail, but that service has seen low ridership since it started in December 2012, Horsley says. He believes it would benefit Pacifica and the Midcoast if an arrangement could be worked out to bring the free shuttle service down the coast, perhaps with a stop at Half Moon Bay Airport.

“We’re considering it, but we don’t really have the funding for the shuttle yet,” he said. “We really can’t demonstrate the need for it yet, but I’m pretty confident we’ll be able to.”

Even with public transit as an option, Tierney anticipates the new trail will cause traffic backups nearby, particularly on fair weather weekends.

“It will increase traffic through Highway 1 in that area, in my opinion,” Tierney said. “If you’re a business person in Montara or Half Moon Bay you’re probably happy about that, but if you’re stuck in traffic you probably won’t be happy about that.”

On the trail itself, a rotating staff of the 10 San Mateo County park rangers stationed on the Midcoast and 25 trained ambassador volunteers will monitor Devil’s Slide Trail and inform visitors about trail safety protocol, history and wildlife. Finley says the parks department is looking to add more volunteers to its fleet as well.

While Tierney thinks park rangers and ambassadors, as well as fencing and signage, will keep visitors safe on the trail itself, the lack of a safe route from Montara’s beach lots to Devil’s Slide Trail remains his biggest concern about the new outdoor hotspot.

“I’m not at all surprised the Green Valley Trail is two years in the making; I’m just glad it’s on (the county’s) radar,” he said. “It will come to fore when there is an accident or they see people walking along the highway … the biggest dangers are the safety issues outside the trail.”

The much-anticipated opening of Devil's Slide Trail was pushed back to Thursday, March 27, due to rainy weather and the delayed delivery of equipment necessary to finish installing some fencing.

San Mateo County Parks Director Marlene Finley said that the opening ceremony date was changed from March 21 because crews have been unable to finish surfacing due to interruptions caused by wet weather, and they are waiting on equipment from the manufacturer that will allow them to finish installing fencing required for public safety.

The trail will be open to the public immediately after the opening ceremony.

Construction on the nearly $2 million trail began in December.

I quote myself from a couple years ago: The tunnel and trail are great ideas. The roadway setup is B.S. Making it necessary to walk across a 45MPH (heck, even a 35MPH) hwy to get to the attraction is ludicrous.
I hate the tunnel!

I agree about the potential for backups, at least initially.

I wonder if it would help to have electronic signage in Pacifica and maybe also Montara to let people know when the lot is full.

I've also been watching the increase in the number of cyclists (especially on weekends) between the tunnel and Pacifica, and, given the narrowness of the road, fast-moving head-on traffic in both directions, and absence of a shoulder, I am concerned about that stretch of road as well. To give cyclists the required three feet of space, a driver may have to come to a dead stop behind them. The potential for getting rear-ended (and even pushed into the cyclist) is pretty significant.

Most car traffic on the weekends will approach from the North. Cars will be attempting to enter the undersized parking area and inevitably find there is no where to park. These drivers will then be forced to turn around and exit the lot and re-enter the highway. As they do, more drivers will come up the hill and attempt to repeat this process. The back-up for southbound traffic will back up into Linda Mar says my crystal ball.