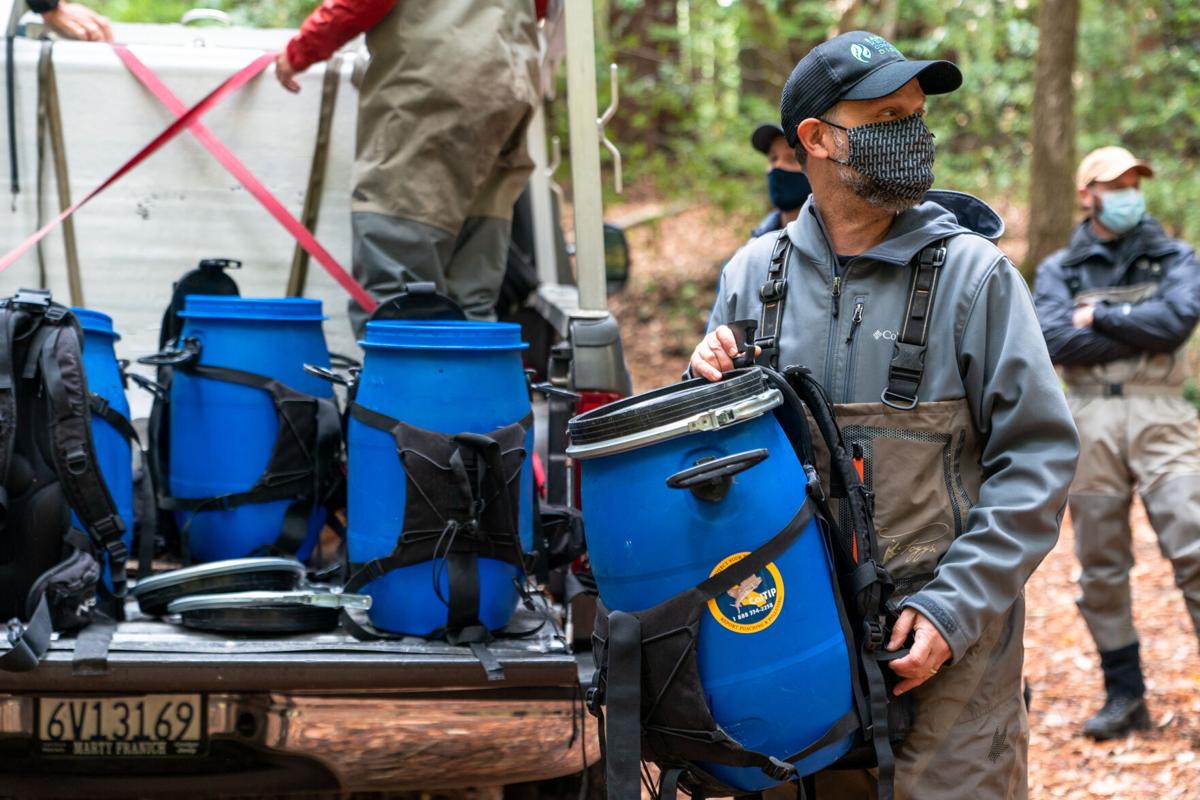 Owner of Alnus Ecological Jim Robins shows off backpacks used to transfer fish from a holding tank down into the Pescadero Creek in Loma Mar on Tuesday, Nov. 17, 2020. Adam Pardee / Review 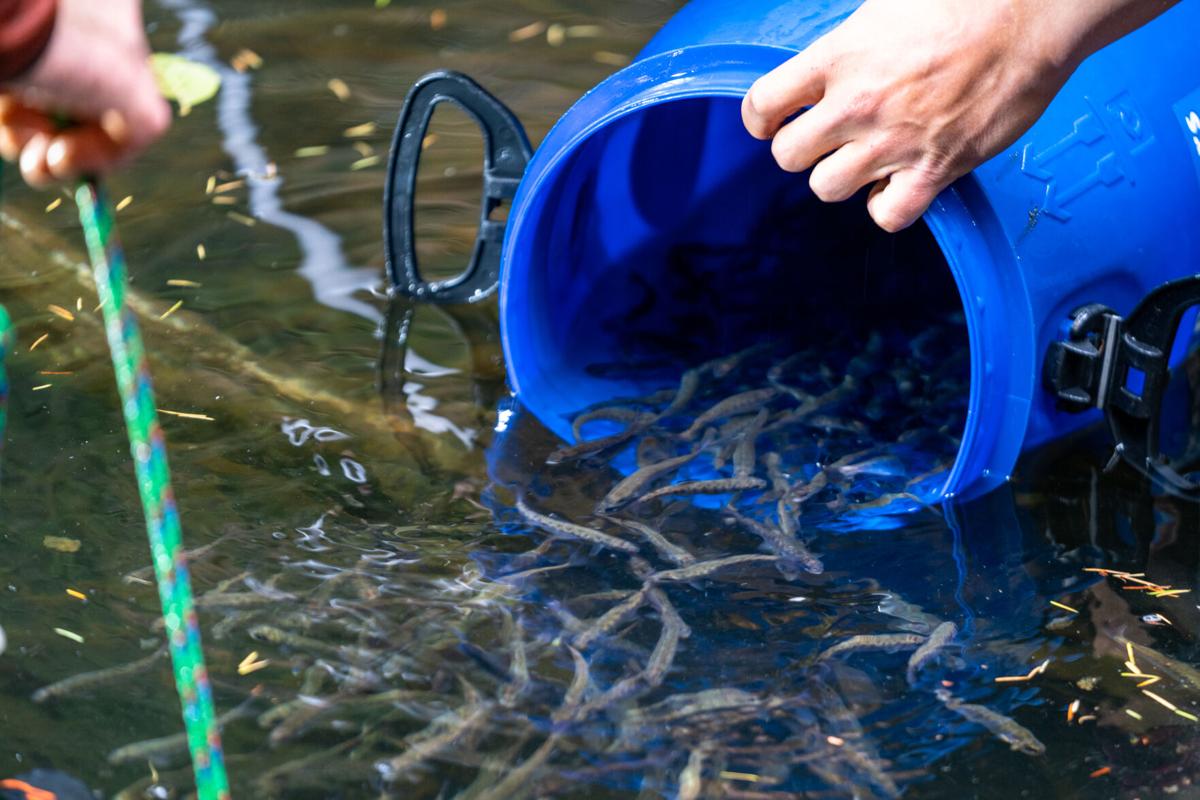 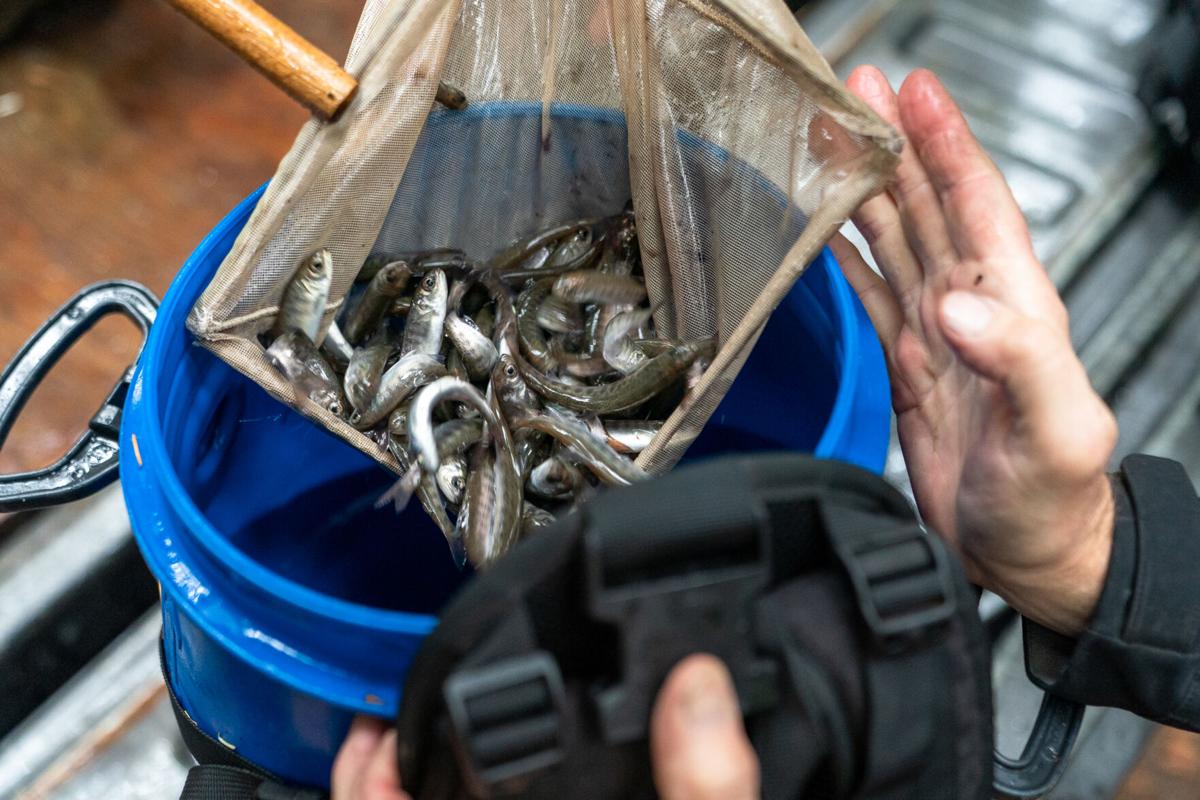 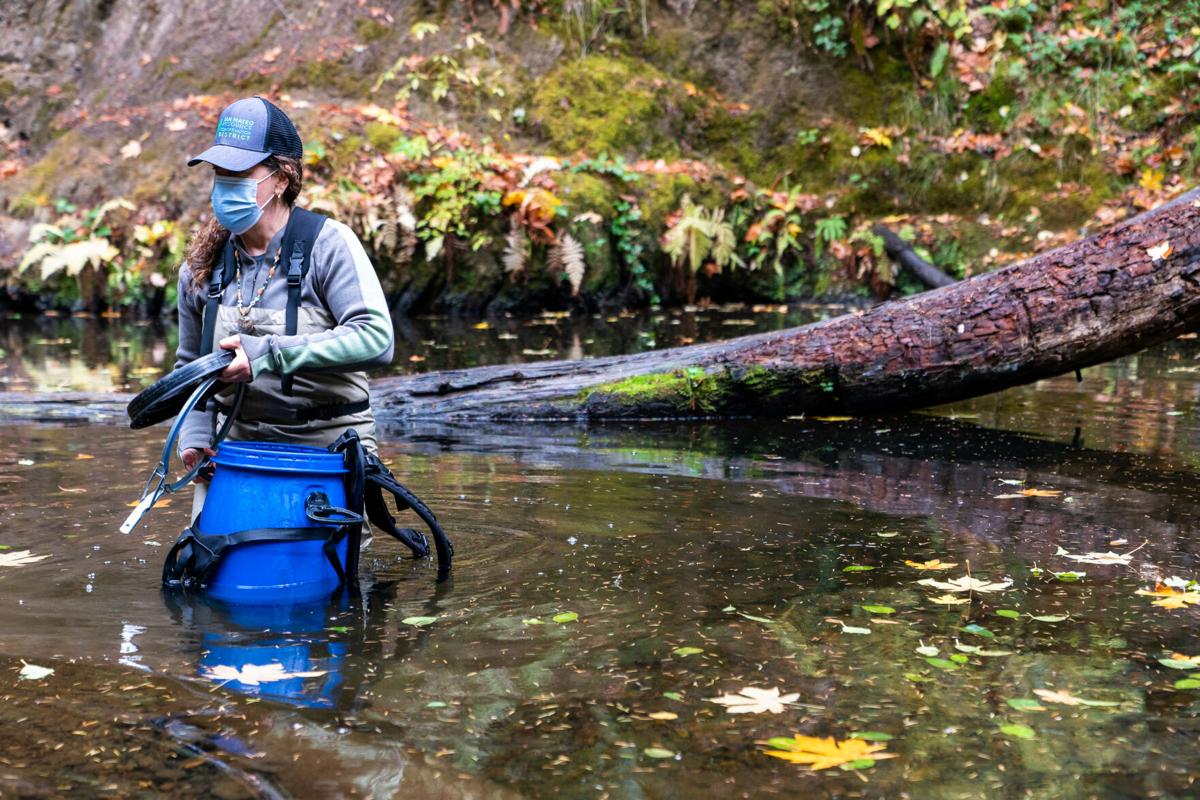 Executive Director of the San Mateo Conservation District Kellyx Nelson removes the lid from a backpack used to transfer juvenile Coho Salmon from a tank and into the Pescadero Creek in Memorial Park in Loma Mar on Tuesday, Nov. 17, 2020. Adam Pardee / Review 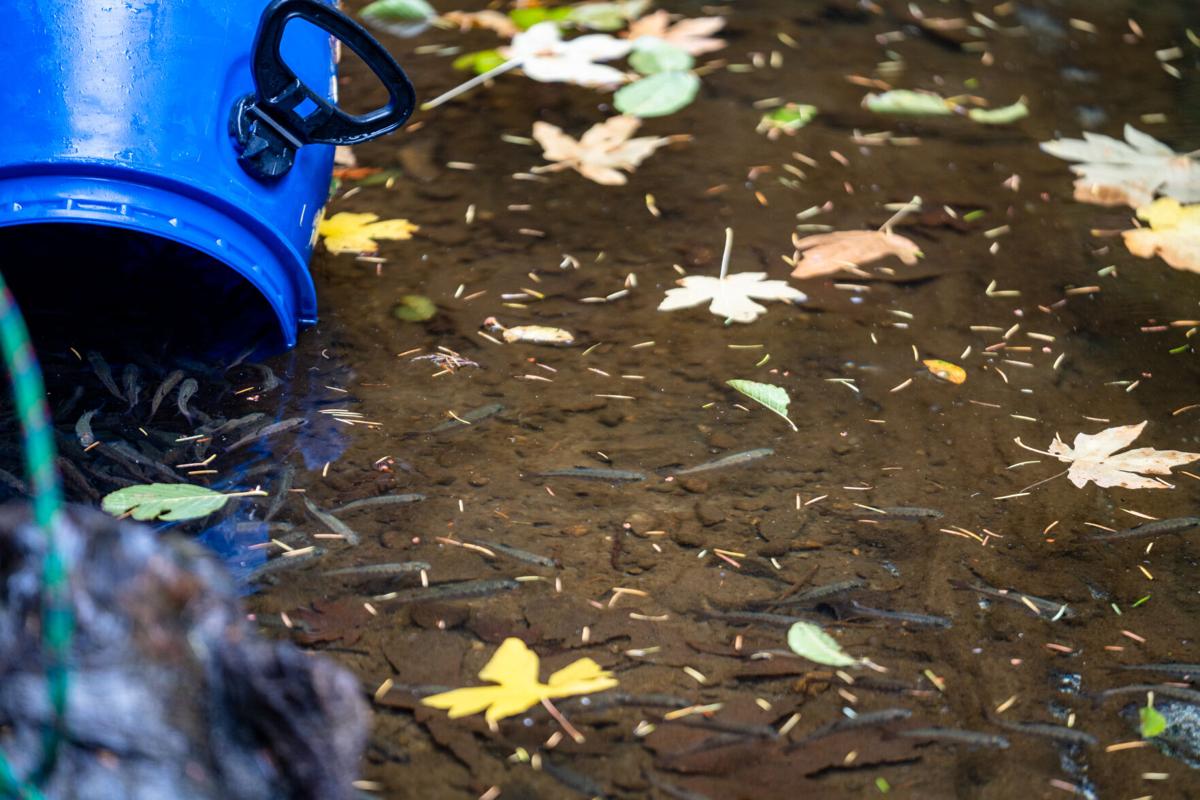 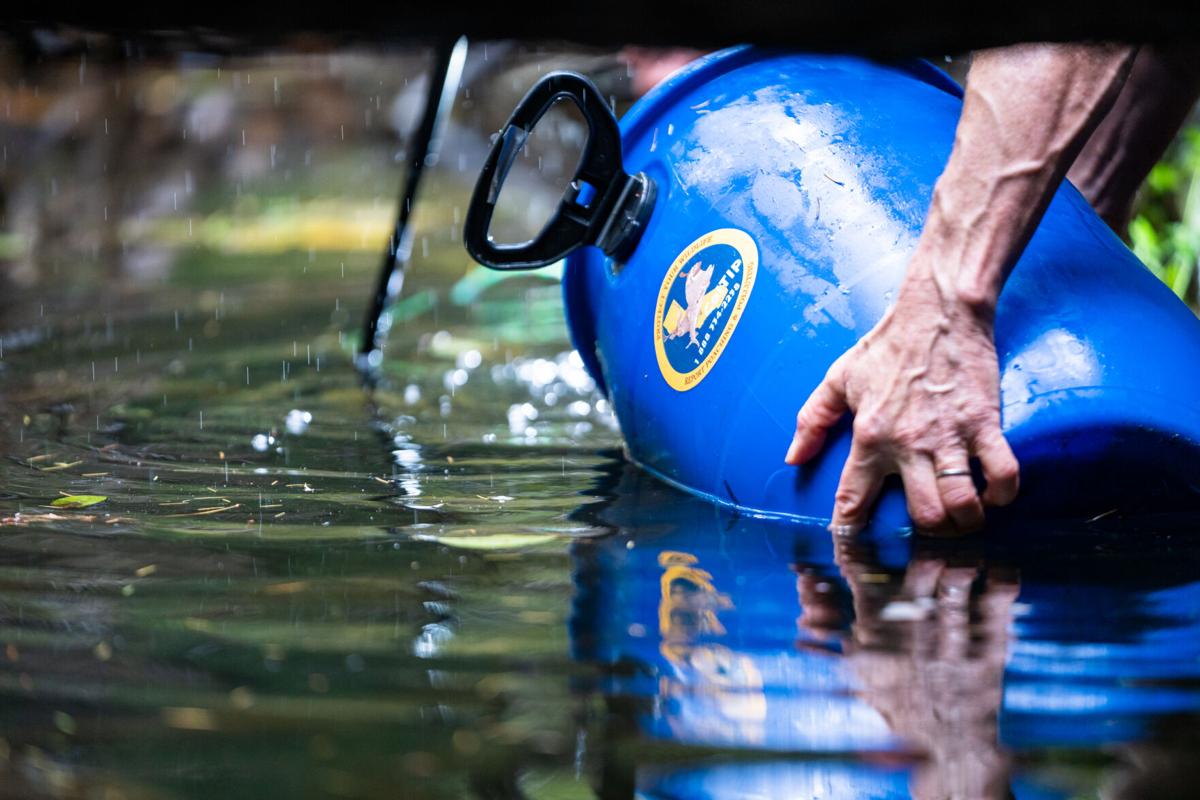 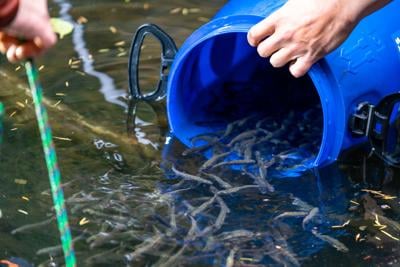 Coho salmon are set to make a comeback on the South Coast. This week, 10,000 of the young fish were released into Pescadero Creek after National Oceanic and Atmospheric Administration Fisheries, nonprofit Monterey Bay Salmon and Trout Project, and the San Mateo Resource Conservation District partnered to repopulate the stream.

“This is utterly, truly, a watershed moment. This is life-affirming,"

According to a press release from the RCD, the fish were bred at a hatchery in Santa Cruz County before being released into the creek, just one of two watersheds in the Santa Cruz Mountains that is fit for coho spawning and survival.

For RCD Executive Director Kellyx Nelson, the moment was a pinnacle in her career, if not her life.

“This is utterly, truly, a watershed moment,” Nelson said. “This is life-affirming. This means that we have brought this watershed back to be healthy enough to be home again to 10,000 Coho salmon and to give them a chance to come back from the brink of extinction.”

On Tuesday, project leaders took a trek out to Loma Mar to distribute some of the fish into Pescadero Creek. A hatchery truck with a tank full of the salmon ventured down a trail in Memorial Park, where large pools of water were determined fit for the salmon. Using backpacks with large water tanks, project leaders transferred the fish from the tank and slowly poured them into Pescadero Creek. Hatchery employees were also onsite moving fish into the backpacks and monitoring their transfer into the creek, and an Ohlone tribe member offered a welcome to the salmon.

The work to bring coho salmon back to sustainable populations has been a long time coming on the South Coast. Nelson wrote that this week’s release “is the culmination of 10 years of hard work and collaboration,” between environmental advocates, scientists, educators, public and private land owners and managers and groups like the RCD that do restoration.

That hard work includes a Butano Creek project to dredge and restore the creek channel to reestablish it as a passage for the salmon’s journey to sea and back, completed in 2019. In 2015, the RCD also removed a dam and modified a road crossing in Memorial Park to open more than 60 miles of habitat to the salmon and native steelhead trout. Nelson said local farmers who have established water storage for the dry months so as to not pull from thirsty streams have multiplied the amount of water that the fish can now call home. Additionally, projects to restore the natural floodplain, control erosion, improve soil health and reintroduce wood back into the creek are what make it hospitable today.

Although just an estimated 2 percent of the fish are expected to survive into adulthood of the species’ three-year lifespan, the newly restored channels provide a lifeline for those that make the trip to and from the ocean during their “extraordinary lifecycle,” Nelson said.

“The fish we put in the creek today and yesterday will be the ancestors of future generations,” Nelson said.

Due to recent wildfires that threatened the region and its ecosystems, including the hatchery where the fish were being raised, researchers identified Pescadero Creek as the best choice to support an independent population of the fish, with the hope they may eventually seed other nearby watersheds.

I can't say*thank you* enough to everyone involved in restoring our rivers.

An interesting view is beginning to take hold, promoted by some Native Americans and other tribes around the globe: that rivers, lakes and other environmental areas are entities entitled to natural rights unto themselves. In some landmark cases, they have been given "personhood" with accompanying legal protections against harm.

I think it's great. Nature does not exist to be a resource for humans; it has its own right to remain healthy regardless of overpopulated human beings' "needs." Stop overpopulating our beautiful country and damaging our environment. As we know, 85% of our growth rate is from immigration. Enough said (as an open borders new administration prepares to open the floodgates. Sad.).

Kellyx has done great work over the years. She deserves a ton of credit for this accomplishment.