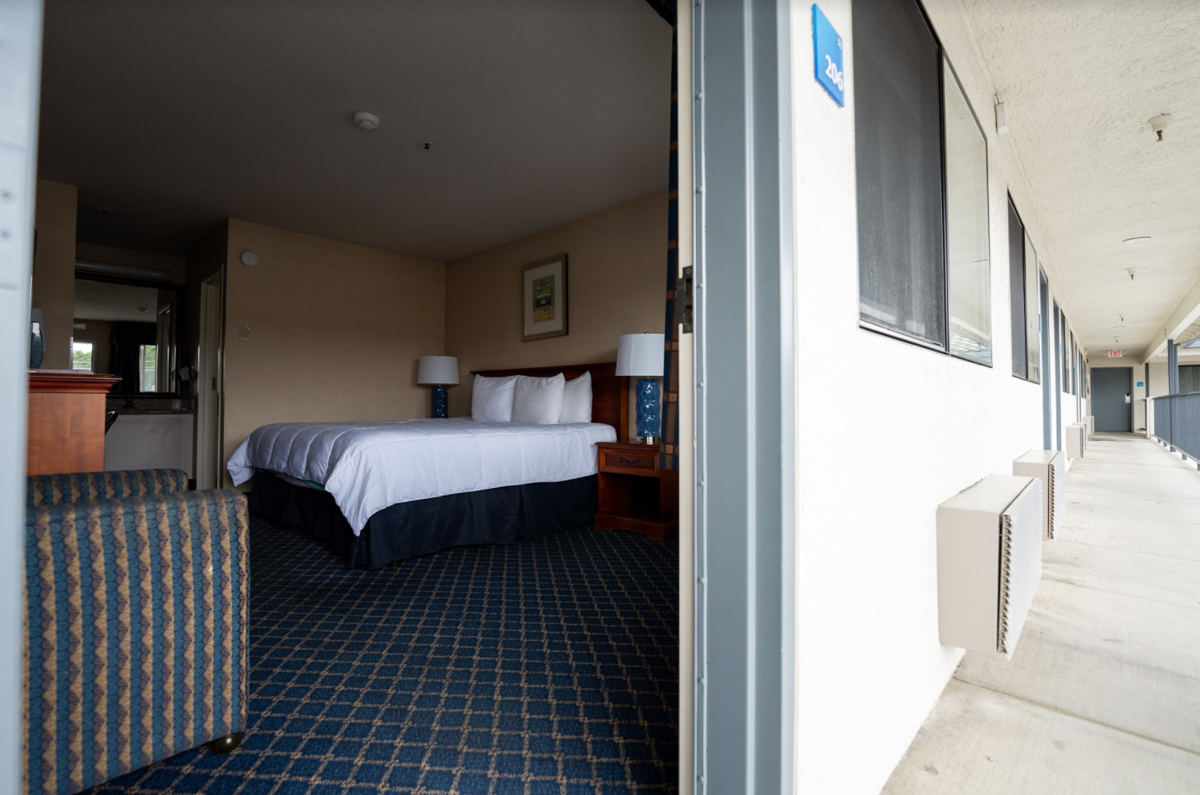 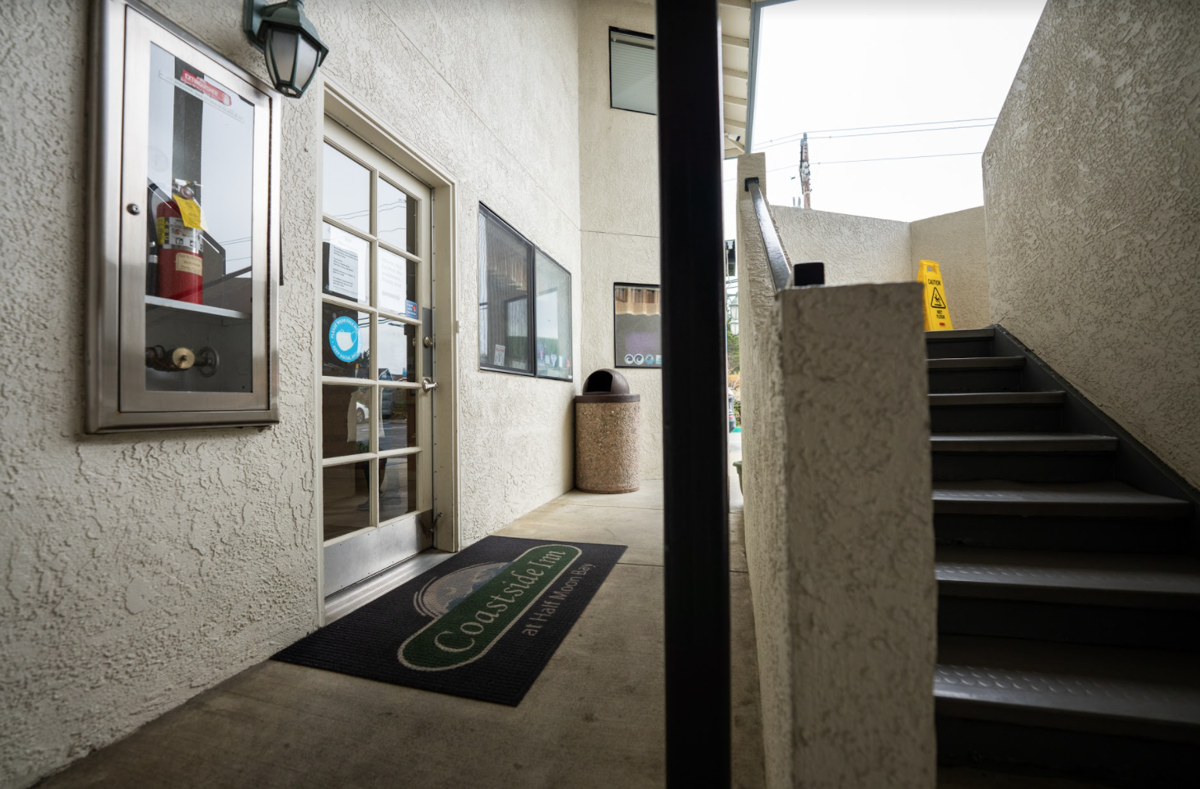 The San Mateo County-owned shelter so far is mostly housing men with ties to the coast. Adam Pardee / Review

On a Tuesday morning, 10 residents at the Coastside Inn Emergency Shelter had a room to call their own. One man avoided the light drizzle outside by reading in bed. Another man rolled back and forth in his wheelchair, catching the cool air. A third stepped into the main office while the housekeeping staff cleaned his room.

Seven weeks into the first-ever homeless shelter on the Coastside, staff said the residents are still adjusting to life there.

Some had been living in the city’s encampments. Others had been without housing before the pandemic, but moved into shelters elsewhere in the county in recent months.

Laura Bent is the chief operating officer for Samaritan House, which oversees the day-to-day operations of the shelter at what used to be the Coastside Inn. Bent called the first few weeks after entering a shelter a “stabilizing” period.

“Imagine coming off the street into a room with four walls and rules and your own set of keys. It’s like taking a breath. For the first time you’re not worrying where you’re going to sleep or eat. Now you can ask, ‘What are my next steps?’” Bent said.

In the past, individuals may have had difficulty connecting with social services, like unemployment assistance or health insurance. Now, Bent said their time in the shelter can be spent filling those gaps. And for those who already had doctors, she explained that living in the shelter removes the barriers that may have caused them previously to miss medical or mental health counseling appointments.

The shelter also started partnering with the San Mateo County Street Medicine Team. The roving team of a nurse practitioner and other medical staff visit the Coastside shelter once or twice a week to conduct routine physical check-ups and ensure residents are taking their medications.

Every week, residents are expected to meet with the on-site case manager to discuss their plans for gaining more permanent housing and employment. Through these consultations, residents are often connected with off-site services, many of which are nearby.

Many get medical care from the Coastside Clinic across Highway 1 in the Shoreline Station. Some go through alcohol and drug counseling at the clinic or the local nonprofit Ayudando Latinos a Soñar. Others are employed through the Abundant Grace workforce development program where they clean area beaches. Recently, a resident viewed a possible home with Abode Services, which provides rental assistance vouchers.

While residents meet weekly with a case manager, they are largely left on their own to keep their appointments. But services like taxi vouchers and ridesharing provided by MediCal and the county’s Homeless Outreach Team help with transportation.

The residents are free to leave the shelter as they choose. The only expectation is that they check in with the front desk at least once a day and sleep in their rooms every night.

Staff said residents declined to speak with the Review for this story.

Christiana Weidanz is the site manager for the shelter. She also is one of several managers who coordinates the countywide intake system into shelter programs. Wiedanz used to see current residents’ names show up repeatedly on lists of people ready to be housed. But some of them turned down shelter to stay on the Coastside.

“It’s not a myth. They don’t want to go over the hill,” Weidanz said. “It’s great for them to access these programs in their community.”

Weidanz said that one resident was born and raised in Half Moon Bay and “he was very clear that this is home.”

Besides being Coastsiders, all residents are also either over the age of 65 or have a preexisting condition that makes them especially vulnerable to COVID-19. These two parameters have guided the county’s emergency housing response during the pandemic.

The pilot program launched on Dec. 22. Since then, the number of residents has steadily increased. And there are plans to grow.

"Some had been living in the city’s encampments. Others had been without housing before the pandemic, but moved into shelters elsewhere in the county in recent months."

What the city official most responsible for this project said is that they were bringing in people from homeless shelters over the hill that had "connections" with the Coastside (whatever that means). And "the Coastside" includes Pacifica. He also said that they were only taking people from other shelters that had proved they could obey the rules of those shelters for the initial stage. (Aka cherry picking for the "pilot project"). I don't see how taking people out of the local homeless camps, while an improvement in one sense, satisfies the "rules" requirement.

Most disturbingly is the statement that some are undergoing drug and alcohol treatment. In the San Francisco homeless hotels the city is bringing the residents free drugs because when they didn't, they found that they were buying and selling them in the surrounding community. Of the hundreds of drug addicts I have worked with professionally, virtually all of them also also sold drugs to support their habits. But the city and county have thought of that--by conveniently putting our shelter within two blocks of two schools and a residential neighborhood with children.

From the article: "Besides being Coastsiders, all residents are also either over the age of 65 or have a preexisting condition that makes them especially vulnerable to COVID-19. These two parameters have guided the county’s emergency housing response during the pandemic."

How sad for you that all you got out of this article is reason to complain and resort to the tired old "Will no one think of the children?" yarn. Personally, I read it and felt so glad that these people are sheltered, dry, and warm and are now in a position to begin to improve their situation.