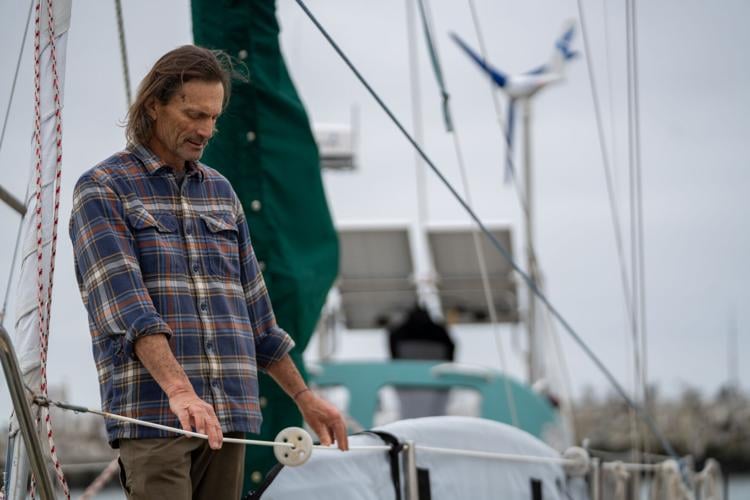 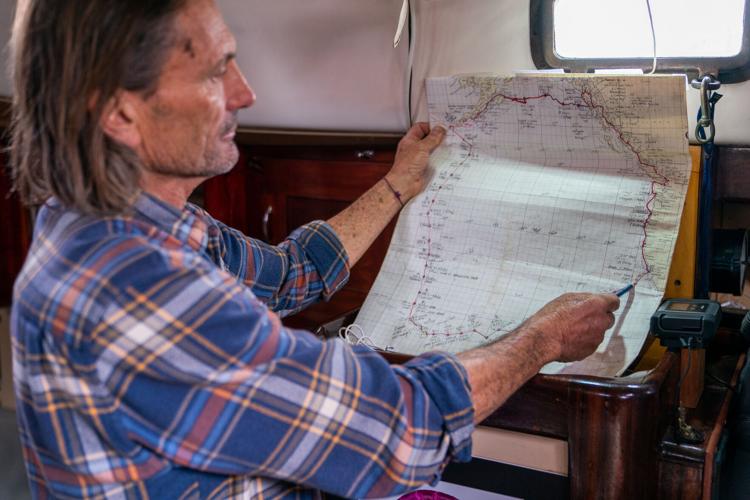 Ron Kucera shows the route he traveled in a solo sailing trip he undertook in honor of a friend. Adam Pardee / Review 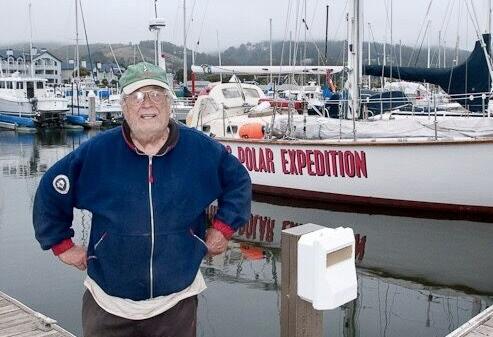 Jerry Borucki was a scientist and sailor and a mentor of sorts for Ron Kucera, who recently undertook an extraordinary journey with Borucki’s ashes. Photo courtesy Ron Kucera

In the pre-dawn hours of Nov. 22, Ron Kucera finally returned home. When he pulled into his slip in Pillar Point Harbor, Kucera officially ended a six-month solo sailing trip that took him from the San Mateo County coast to Hawaii to the Bering Sea and back.

The 8,777-nautical-mile odyssey — equaling more than 10,000 miles — was meant to honor his late friend Jerry Borucki, a retired scientist from the NASA Ames Research Center. Kucera described Borucki, who frequented the harbor and had his own history of maritime voyages north of the Bering Sea, as a kind of mentor who helped him learn the nuances of sailing and long stints at sea.

“He really was a wealth of information and encouragement,” Kucera said.

Kucera has lived and surfed on the Coastside for 30 years. He met Borucki, who lived in Mountain View, at Pillar Point Harbor, and the two became close. Borucki died at age 76 in 2018 due to heart issues. While Borucki was ill, Kucera helped out where he could and looked after his friend. Borucki told Kucera he wanted to be cremated and have his ashes spread in Akutan Harbor, a popular protected cove on the Aleutian Islands chain.

After Borucki died, Kucera purchased his boat, a 39-foot vessel that he renamed Mar de Luz.

“Alpha Arctic Wülf was a bit too macho for me,” Kucera said laughing.

The ship’s single mast, a sloop in sailing vernacular, is a common design for solo sailing. Over the next three years, Kucera went to work on the boat, which Borucki had bought in 1993. The vessel had sat unused for 10 years, so Kucera installed solar panels, freshwater converters, new navigation technology and replaced the rigging. On May 23, he launched westward from Pillar Point

Harbor. He spent a few weeks in Hawaii taking in the tropical waters and surfing along the coast before heading north to Alaska.

Along the way, Kucera, 69, spread his friend’s ashes in places of significance to Borucki, Hanalei Bay in Hawaii, Kodiak Island, and other spots over the 16 days it took to get from Hawaii to Alaska. While Mar de Luz can travel up to 170 miles on a good day, Kucera said he mostly lets the ship run on autopilot and go between 4 to 5 knots to average around 140 miles per day. Though mostly alone for the trip, Kucera’s son joined him for a brief stint in Alaska, where they waited out inclement weather for several days before setting sail together.

During the trip, Kucera took in a staggering number of birds, whales and fish. He endured bad weather, but nothing he wasn’t prepared for. There was a particularly rough day in the Aleutians when he didn’t sleep for two days while navigating the notoriously strong tides and dodging freighter traffic on a narrow pass near Akutan Island.

In the last decade, Kucera, who works in real estate, has seasonally sailed off the coast of Mexico and Ecuador. He eventually made his way farther south, venturing into waters off Chile and Patagonia, mostly by himself. But completing the loop around the Northern Pacific Ocean was the longest trip he’s done.

“I used to jokingly tell people I sail solo because I don’t want to put anyone else in danger because I’m still learning,” Kucera said. “I still feel that in a way. But I work in a business where I am talking to a lot of people. And it’s nice to get away from that.”

While he prefers to travel the seas by himself, Kucera is happy to meet people along the way, from fishermen who are willing to share a meal to local residents on land who share stories and hospitality.

“When you’re sailing alone, you’re truly alone and it takes a couple of days to get that rhythm,” he said. “I don’t think I get lonely, there’s so much to do and see. But it’s nice when you come into a place and start meeting good people. The interaction is that much more poignant.”

As part of its Earth Day celebration, the environmental conservation organization Sempervire…