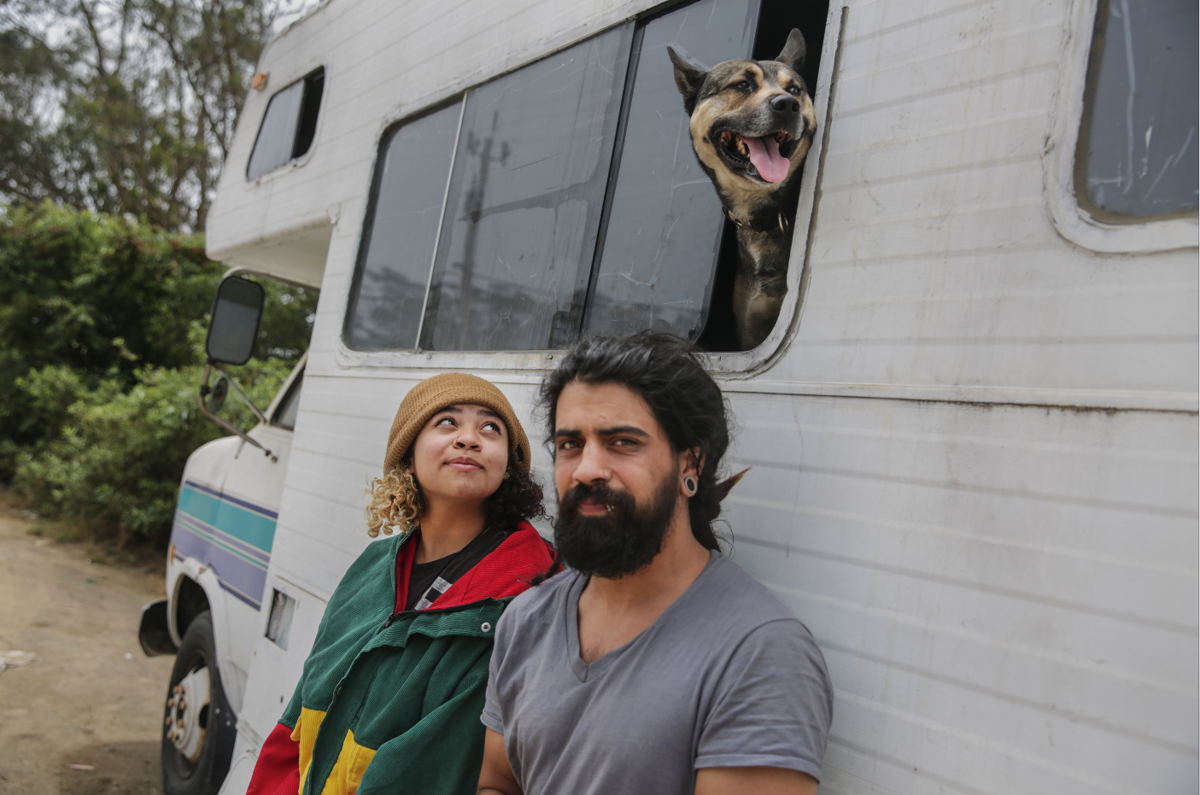 Leo Hotz, left, and Mikel Mepham are living with a dog and cat in their 1977 Chevrolet Itasca for now. They say their living expenses are about $500 a month and that they are saving to buy some land. Kyle Ludowitz/Review 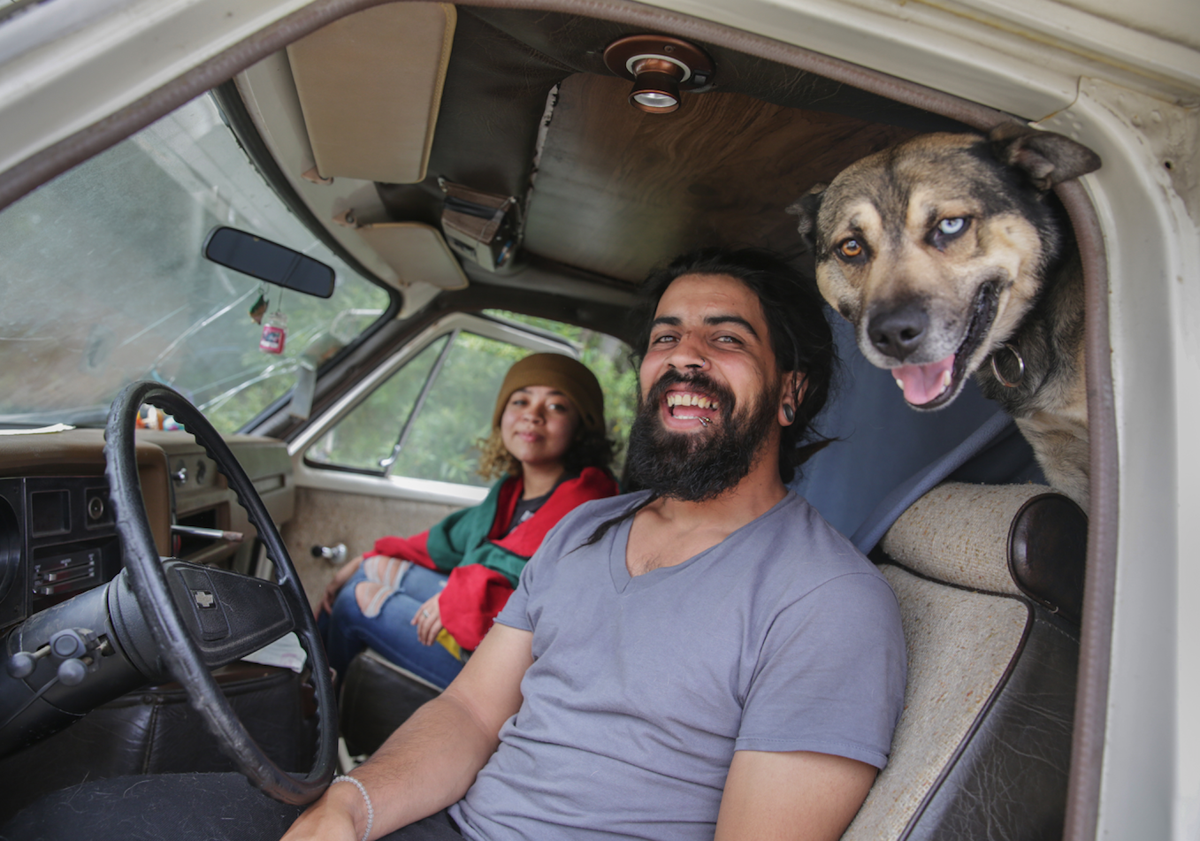 Mike Zajec says he doesn’t know where he would be without his RV.

Zajec, 53, was living in a tent behind Safeway at Strawflower Village when the city closed the homeless encampment there. An acquaintance knew someone selling a recreational vehicle, but Zajec couldn’t pay the $1,500 asking price. He waited to see if the price would fall. One day, he got good news.

“They’re giving it to you,” his friend said.

Zajec, a Coastsider since 1976, and his wife, Rua Rhodes-Zajec, have been living in the vehicle since last spring, moving between Moss Beach and Half Moon Bay.

They are a part of what appears to be a growing population of Coastsiders living in RVs, campers and vans. Earlier this month, San Mateo County released its biennial homeless count and reported 494 people living in RVs — a 127 percent increase over two years. Overall, observed homelessness increased from 43 to 54 people in Half Moon Bay and from 22 to 60 in unincorporated Coastside communities.

Some living in their vehicles say they are comfortable with their lives, some struggle and some are on the path to more stable housing situations.

“I suspect that is probably what increased the numbers (of reported homeless) here on the Coastside and in Half Moon Bay,” Deputy City Manager Matthew Chidester said.

In the past, some people living in vehicles have set up camping sites on the streets, which brought San Mateo County Sheriff’s Office intervention, Chidester said. The deputy city manager added that residents are “unlikely” to be cited if they comply with parking ordinances and keep their belongings off the street.

Mikel Mepham, who grew up in Foster City, loved living by the bay, but couldn’t stomach paying $1,250 in rent for a room in an apartment. He and his girlfriend, Leo Hotz, have been living on the Coastside in their 1977 Chevrolet Itasca for nearly a year.

Hotz, originally from Aurora, Colo., estimated their monthly costs at $500, including food, phone bills and taking care of their two pets, a cat and a dog. Hotz works at Dunkin’ Donuts and Mepham at the Flying Fish and Grill in Half Moon Bay.

The inside of their vehicle features a flatscreen TV, an Xbox gaming system, WiFi and a Tempur-Pedic mattress. Like many people their age, Mepham, 31, and Hotz, 19, play Fortnite and watch Netflix.

“We got everything we need in here,” Mepham said, gesturing to his motorhome.

Mepham said they haven’t been bothered by law enforcement, but someone recently stole their generator, and a nearby RV was egged and vandalized.

Hotz and Mepham are saving money to eventually buy a plot of land.

Others have been struck by misfortune.

Tim, who asked not to be identified by his last name, was a truck driver until he suffered a brain hemorrhage. Unable to drive professionally, he subsists on $1,100 a month in disability insurance, most of which goes toward auto insurance, gas and food. He has been in his camper for five years, bouncing between the Coastside and San Francisco for the past two years because he can no longer afford to stay in an RV park. He estimated he could afford $350 a month in rent, a near-impossibility in the Bay Area.

“They just want a ton of money,” he said.

Marie, who asked to be identified by her middle name, has been living in her car for four years after leaving an abusive relationship.

“I walked away from everything,” she said.

Now an employee at a furniture restoration store, Marie struggled to find a job initially and couldn’t afford to rent a room on the Coastside.

“You weren’t allowed to use the kitchen,” she said of one place she toured in Pacifica. “And you had to share the bathroom. And this place smelled like cat piss.”

Marie said she will move into an apartment with friends in August, paying $800 a month. She criticized the lack of affordable housing options on the Coastside.

Zajec lost his job at his family’s company after a falling out with his father. He and his wife pool together her Social Security income and money he earns from odd jobs to get by.

They say their situation will change soon.

Zajec and Rhodes-Zajec are planning to move to the Central Coast to live with Rhodes-Zajec’s granddaughter, who will help them get back on their feet. Zajec said he’s looking forward to an apartment of his own.

Here is what I would do to change my lifestyle: There are 2 able bodies here.

Multiply by 2 and that's plenty of rent.

This would work even without transportation, buses are just fine and Thousands of people use them daily.

We should have counselors encouraging this instead of pointing to more socials services.

These should be reserved for people who are really challenged and cannot function without help.