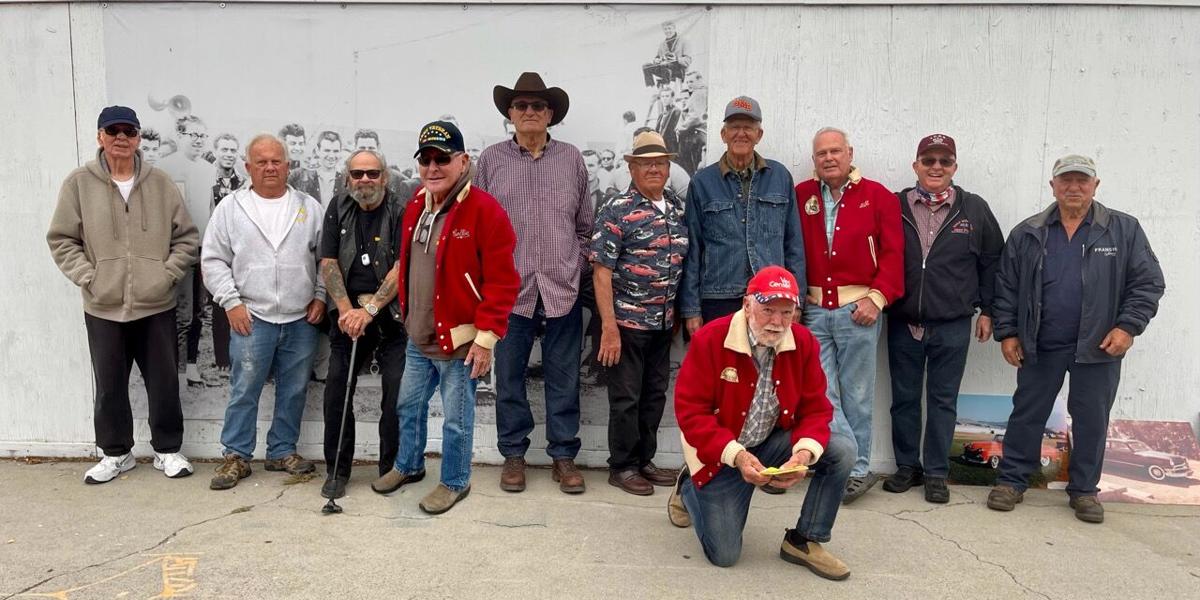 The Coast Riders were reunited recently after a photo of them in their prime was hung from the wall at Main Street and Kelly Avenue in Half Moon Bay. Photo courtesy Jan Tiura 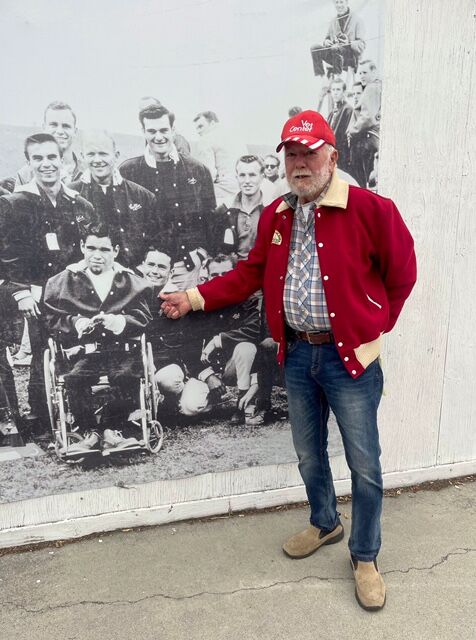 Bill Terry was among those Coast Riders who got together for a reunion. Photo courtesy Jan Tiura

In 1960, a group of local young men met at what was then called the Polka Dot Cafe on Main Street to form the historic Coast Riders in Half Moon Bay. On Sept. 25 of this year — more than 60 years later — the remaining members of the Half Moon Bay Coast Riders along with relatives and people who knew them gathered at the corner of Main Street and Kelly Avenue, where historic photos of the group and the old gas station now hang.

“I knew some of the Coast Riders and I knew of the club but I wasn’t a part of it,” said Joe Brennan who has been on the coast since 1958 and helped organize the reunion and the mural of photos. “Then, many years later, I saw the pictures of them at a class reunion and then got the idea of putting them up where that blank fence was just to show what had been there. Just sort of a historic peek at the past. So about a year after we got together the survivors we could find and had this little reunion and a reshoot of the picture some 50 years after it was taken.”

“I was just enthralled watching the guys have so much fun,” said Cunha. “I mean it was heartwarming. Collin Tiura and Billy Claudino could still fit into their jackets and they couldn’t recognize each other so they had to look at the name on their jacket and they hugged and hugged and hugged. It just melted my heart.”

Also wearing the classic red Coast Riders jacket, former Coast Riders president Bill Terry addressed the crowd. He shared the history of the group as others chimed in with stories.

The Half Moon Bay Coast Riders car club was a social and service club of local car enthusiasts. They helped stranded motorists they passed and took part in numerous community projects. They had courtesy cards they would sign and give to each motorist they aided. The Coast Riders also organized the first adult softball and basketball leagues in Half Moon Bay.

“If somebody was pulled over on the side of the highway we would stop and help get their cars started,” said Terry in an interview. “We whitewashed the Main Street Bridge. With the Odd Fellows, we would help clean the cemeteries. We put numbers on the houses down in Arleta Park so the fire and police departments would know where to go. And we partied a lot. We would go down to the beaches and have bonfires and do what you do when you’re a kid.”

In sharing stories of racing up and down the canyons, playing poker and drinking from kegs of beer, Terry added, “I can’t believe some of us lived this long.”

Terry’s family has been in Half Moon Bay since the 1880s. His father was born in the Johnston House and his great-uncle built Cameron’s Pub and Restaurant in 1930. Terry was 19 at the time the Coast Riders began and served as president for 20 years. The car club was active until 1982, though Terry was drafted for the Vietnam War and missed a few years.

“In the ’50s and ’60s there wasn’t much to do as a kid in Half Moon Bay,” said Cunha. “There was a show and you got to go to the show on Friday nights. You were lucky if you got to go Saturday night and watch the same movie again. You had surfing and then you had the drags.”

Cunha’s first husband was a Coast Rider and shared that back in the ’60s the club put money together and built a car. As a woman, Cunha couldn’t participate in the club but she drove the car they built in the Powder Puff race.

“It was just fun,” said Cunha on hanging out with the Coast Riders back then. “They are just a great bunch of guys.”

Officer Dick Beale of the Half Moon Bay Police Department was the liaison to the Coast Riders.

“He and his wife were mentors to the boys and it was a good deal in that way,” said Brennan. “They did a number of community projects that were a benefit to the community.”

The Coast Riders originally met at what is now the Cunha Intermediate School, but at the time was Half Moon Bay High School. They eventually moved their clubhouse to Smith Field in the concrete bunkers left over from World War II coastal defenses.

The bunkers used to be covered in barn wood and looked like old buildings. In one of the bunkers they created a rec hall with a 1901 Brunswick pool table, a dart board and a ping pong table.

“We used to meet on Tuesday and we would play cards after the meetings,” said Terry.

Terry also recounted a time that they tried to get rid of the bats flying around the rec hall with baseball bats and pool cues.

“Lucky we didn’t kill each other trying to get those bats,” said Terry.

Terry spoke of a different time when there were no trespassing signs and one would often drive around with a deer rifle in the back of the truck. Members of the club would go hunting and fishing and hang out at the Main Street gas station run by the Cunha brothers.

“They had cool cars and it seemed like they were always having fun picking up chicks,” said Brennan. “I was more the nerd type in high school.”

At the reunion the men shared memories, talked about cars and reminisced about friends who have since passed away.

“It was just a great thing and it was great to do this reunion and for people to come to it,” said Cunha. “It was great to see these old farts really enjoying themselves.”

Rad.....just F'n RAD! Good on you all for organizing this and keeping the stories and culture going. Good group and a great cause.