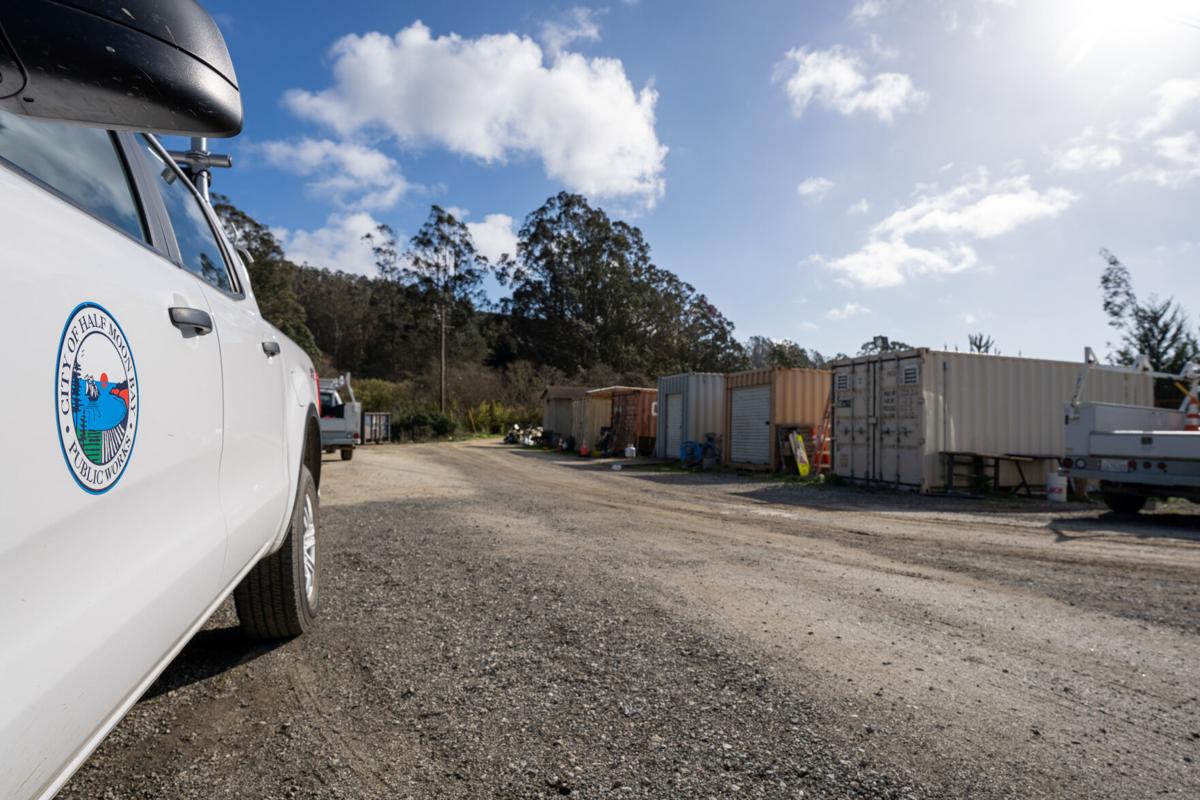 Storage containers lined up at the public works property off of Stone Pine Road in Half Moon Bay on Monday, Jan. 25, 2021. Adam Pardee / Review 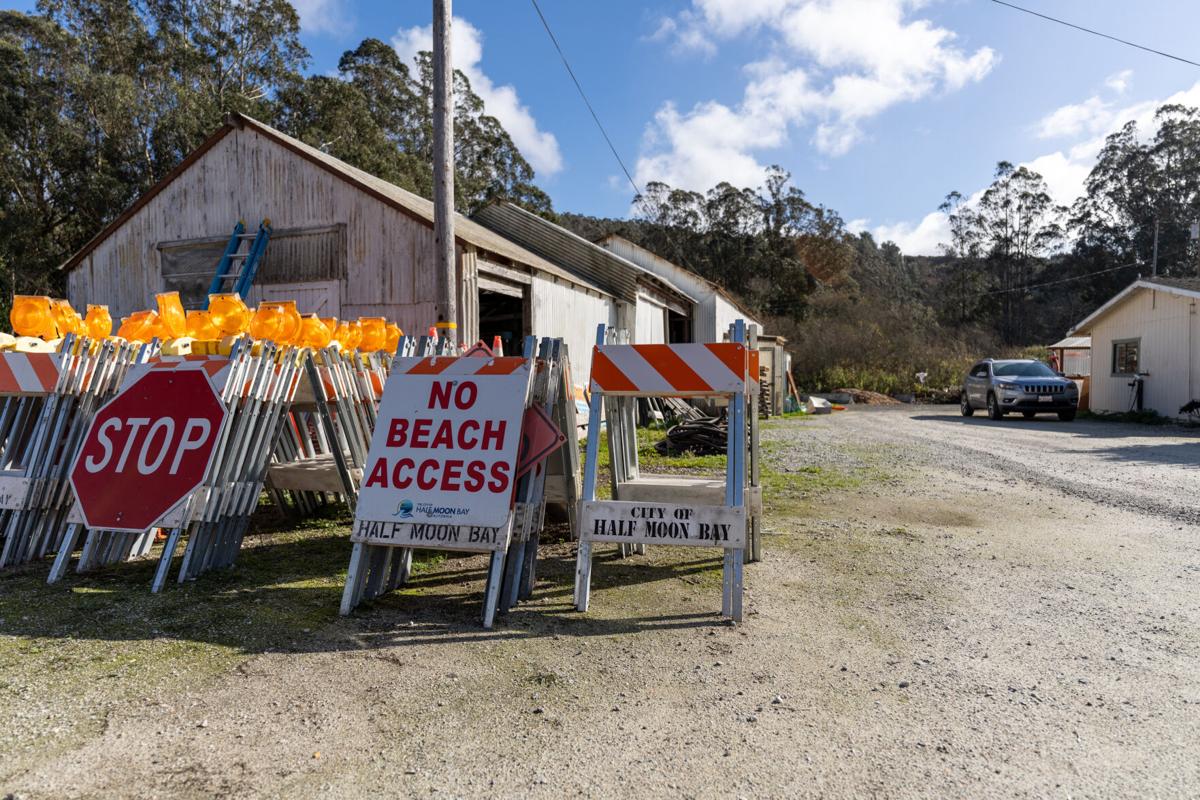 Road signs stacked at the public works property off of Stone Pine Road in Half Moon Bay on Monday, Jan. 25, 2021. Adam Pardee / Review 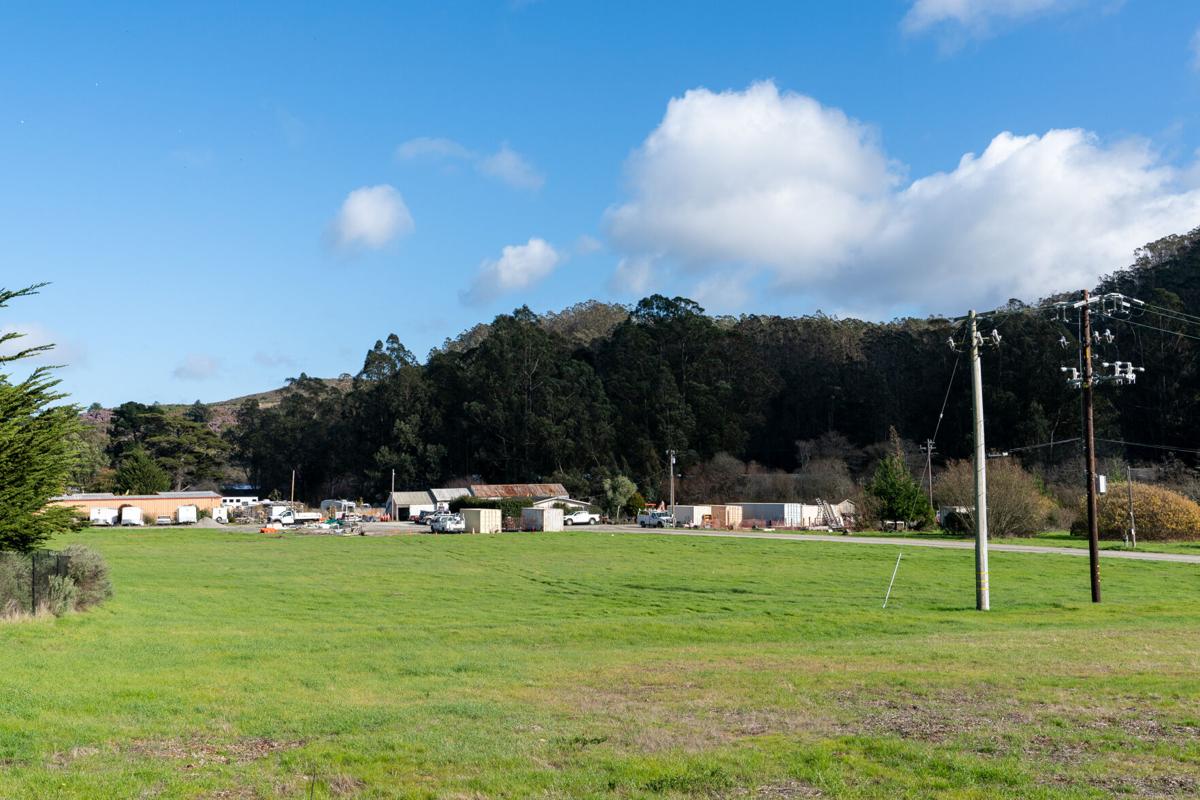 A large vacant field sits alongside public works vehicles and storage at the public works property on Stone Pine Road in Half Moon Bay on Monday, Jan. 25, 2021. Adam Pardee / Review

The city of Half Moon Bay now owns the 21-acre lot at 880 Stone Pine Road following a multiyear saga of failed repayment and a jettisoned park design.

The purchase will give the Public Works Department a permanent home. And in so doing, it paves the way for facility improvements alongside the creation of a public walking trail — a detail negotiated as part of the agreement with the property’s longtime owner, Peninsula Open Space Trust.

In the nearly two decades the Public Works Department has used the space as a mix of equipment storage, vehicle parking and workshop — commonly called a corporation yard — dreams for improvements abounded. But nothing substantial could be done without ownership.

That changed on Jan. 15 when the city closed escrow on the property, which was valued at $2.18 million. This brought the city one step closer to taking over title from POST, which had held on to the property after an initial repayment deal with the city fell through in 2009.

Last year, the city renewed its commitment to acquire the property and forged ahead despite the pandemic. This month it was successful with financing provided by the California Infrastructure and Economic Bank, or iBank. The city agreed to borrow $3.2 million from iBank, which it will pay off over 30 years.

About $1 million was reserved for improvements which Public Works Director John Doughty said are badly needed.

Soon after the purchase closed, Doughty and his staff initiated conversations with the design firms behind the Carter Park and the city hall remodel to begin work on a master plan for the site. He envisions a large single storage facility that will replace the multiple shipping containers, which now hold maintenance equipment, as well as covered parking for city vehicles.

“When you don’t own the property and don’t know what the future is, it’s hard to make investment,” Doughty said. “With the closing on this

land, we’re able to literally tear down buildings that should have been taken down a year ago.”

There are some interim improvements the city can make, Doughty said, namely heightening the site’s security system. This is a priority following an incident last year when a thief drove off with one of the city’s vehicles.

There are plans to install a card-access gate at the entrance, a project that involves running fiber optic cables through the property — an infrastructural change not possible before.

In 2004, the city purchased the lot from Nurserymen’s Exchange for $3.1 million with an interest-free loan granted by POST. At the time, the city planned to develop a new park that at one time included a conceptual plan for a soccer field and community garden. But just before loan repayment was to begin in 2007, concerns about exorbitant costs to build the park led to a loan extension until the city ultimately abandoned its plans in 2009, handing over ownership to POST.

In 2018, POST announced plans to sell, giving the city courtesy priority. Talks to purchase the land resurfaced with broader possibilities for how the space could be used. The idea of a park was floated once again, along with affordable housing. By then, the site had been used as a Public Works corporation yard for more than a decade.

Public Works maintenance worker Nate Caravalho said he believes that with infrastructural improvements, his team can streamline its work and tackle some of the bigger projects so the city doesn’t have to look to contractors.

Public Works Superintendent Todd Seeley said he was excited for the future of his staff, which he said had to be resourceful in all the years the department lacked a "permanent home.”

“By having a nice, shiny building we can help build a more cohesive team that takes pride in the work they do in Half Moon Bay,” Seeley said.

- 2004: City purchased lot from Nurserymen’s Exchange for $3.1 million with no-interest loan from POST.

- 2005: City authorized to spend up to $250,000 for planning services for a planned park, with Moore Iacofano Goltsman hired as the design firm.

- 2007: Concerns surface about the potential park costing as much as $14 million.

- 2020: Council voted to approve purchase of property for about $3 million. Under terms that city would set aside some of land to be used for a public walking trail.

- December 2020: City begins talks with iBank on $3.2 million loan — $2.8 million to cover cost of purchase and the remainder for property improvements.

This is really amazing! The City is struggling with a major reduction in income due to the pandemic. They also have made themselves too dependent on one tax item for most of their revenue. All financial advisers would say diversify so it one revenue source hiccups, you have alternatives to pick up the slack.

But the City facing a big shortfall goes out and borrows $3 million dollars when they can’t even afford to pay their current obligations. To paraphrase a cliche “ when you’re broke, stop spending”

And why does the City need a $1 million garage! Not only is that incredible amount of money for a structure, but what are they storing? Ferraris and Mercedes?

What’s also amazing is who would lend a borrower with the financials like the City 150% of the purchase price? You trying going to your lender and tell them your income is down and you can’t pay your obligations and want to borrow 150% of your home’s value and see what they say.

A better and cheaper solution wasfor the City to park its F150s on the $25 million Beachwood Lot they own and grossly overpaid for. Surely there are a few patches without sensitive weeds or red legged frogs to park their precious fleet

Steve. The city did not pay for Beachwood. An insurance company did. Other than the fraudulently obtained high interest loan with no payments applied towards principle for a decade, which cost us 10 million, we came out smelling like artichokes.

Add to that interest legal fees, Ecco reports and years of wasted city time comes to a big number. Not to mention the booboo of not knowing to ask for all those valuable water connections. At the time the lot was worth around $2 million. Lot isn’t worth much without water connections now

Heck, that kind of money could be used to hire another assistant!!

"There are some interim improvements the city can make, Doughty said, namely heightening the site’s security system. This is a priority following an incident last year when a thief drove off with one of the city’s vehicles."

BS. They could have mad security improvements at any time.

“By having a nice, shiny building we can help build a more cohesive team that takes pride in the work they do in Half Moon Bay,” Seeley said.

Really? The current team is not cohesive and doesn't take pride in their work?

Our city is going broke. We can't meet our obligations with regard to paying the debt on the library. We just added a few points to the transient tax and then lost a generator of transient tax revenue. The council refuses to admit that we had a spending problem prior to Covid.

What to do? Incur more debt!!! Notice that the story fails to mention how much interest we will pay on the loan. Also notice all the inconsistencies between the story and the time line the Review puts forth.

December 2020: City begins talks with iBank on $3.2 million loan — $2.8 million to cover cost of purchase and the remainder for property improvements.

About $1 million was reserved for improvements which Public Works Director John Doughty said are badly needed.

I wholeheartedly agree with both Steve Hyman and John Charles Ullom regarding the wacky financing and timing of this purchase. Not only did they default on this same property before, but this is a huge amount of acreage for a Corporation Yard, 20.5 ACRES? Then, coupled with the fact that at the end of very long (over 5 hour City Council Meeting on Dec.1st,2020 mainly about the Homeless Hotel) they waited until all the County Big Wigs were logged off the Zoom video before discussing the purchase of 880 Stone Pine You can watch the meeting on Youtube starting around 5 hours and 19 minutes: PCTV HMBCC MEETING 12/1/2020. The plan back then, per the meeting zoom video, but not mentioned by the Reporter, was that they were spending $2.18 Million dollars of the HMB City Operating Reserves to complete the sale as an ALL CASH Offer, then, using I-Bank to do a Cash-Out RE-FI for $3.2 Million dollars, so they can then reimburse themselves for the Cash reserves outlay. I guess they are getting a second appraisal to justify a new price of $3.2 Million, after just closing at $2.18 million, it they are over-leveraging their new purchase. What is the perplexing thing to understand is that they are "deferring" payment on the Library Loan for a year, AND they have a BIG LAWSUIT coming up in March 2021, which The City initiated against the other Member Agencies of the Joint Powers Agreement at SAM (Sewer Authority MidCoast) and you would think that spending money (from an already very tight City Budget due to the loss of TOT, their Transient Occupancy Tax, due to a reduction of Visitors thanks to COVID-19, on a FANCY over-sized Corporation Yard was just frivolous, or at best "Magical Thinking" by those in Power. There are signs that a more contagious strain of the virus is already here in our County. What happens to the City budget if Tourists spending the night, in local hotels, do not return as soon as hoped? What if the Judge rules that they are in the wrong regarding the Sewage lawsuit? What happens after a year of potential "The Glass is Half-Empty" scenarios, IF events do not go "their way". Will the County defer their library loan repayment for another year? Will they default on the estimated $160,00 annual debt servicing on the New 20.5 acre Corporation yard ? No one predicted the Fires just south of us from Lightning Strikes. What if all the additional legal fees their SAM Lawsuit don't buy them a win? Hubris is just that!