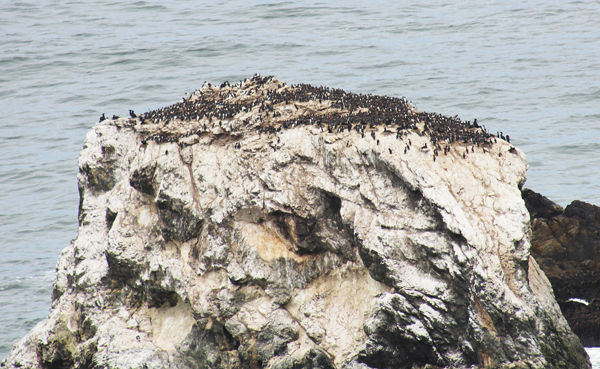 Experts have seen an alarming increase in the number of dead juvenile common murres on the coast of California this summer. The murres congregate off the Midcoast, including on Egg Rock near Devil’s Slide. 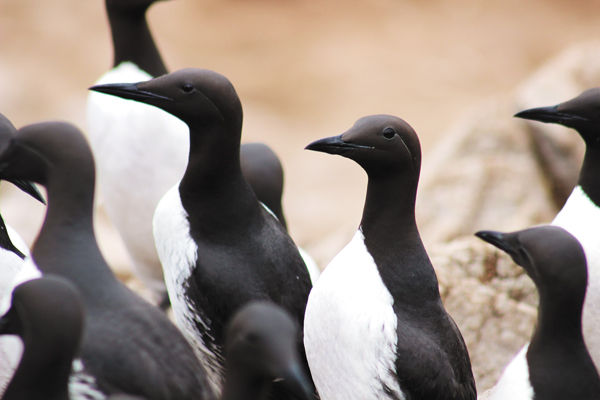 Common murres are a common sight on the California coast, but lately many of them are dying due to current ocean conditions.

Experts have seen an alarming increase in the number of dead juvenile common murres on the coast of California this summer. The murres congregate off the Midcoast, including on Egg Rock near Devil’s Slide.

Common murres are a common sight on the California coast, but lately many of them are dying due to current ocean conditions.

The influx began in August, when the first of them arrived at the International Bird Rescue’s Fairfield center. They were young, emaciated seabirds with coloring akin to a penguin.

“We started to get a smattering of birds and it never stopped,” says International Bird Rescue spokesman Russ Curtis.

Over the last two months, more than 300 sick and starving common murres have been brought to the International Bird Rescue’s San Francisco Bay Area location for care. It’s part of what wildlife experts are calling a “die-off” of common murres that’s particularly affecting juveniles.

While periods of increased mortality among seabirds occur — they’re actually most common this time of year following young ones fledging the nest — the magnitude of and reason for this die-off is perplexing to experts. Though unable to give an exact count, Greater Farallones National Marine Sanctuary research coordinator Jan Roletto said in an email that it has observed four to five times more dead and dying common murres than average for this time of year, 80 percent of them chicks.

“We do anticipate these higher numbers through October,” Roletto said.

There have been noticeable changes in the Pacific Ocean that have caused difficulties for marine life of late. A toxic algae bloom off the Pacific Coast has led to domoic acid poisoning in birds, sea lions and others that feed on anchovies and other types of fish that eat the algae. A strong El Niño has also led to warmer ocean temperatures off the Coastside, with the Monterey Bay up to San Francisco seeing a 5- to 8-degree temperature increase, according to Curtis. The warming Pacific Ocean is causing fish to venture to colder waters, forcing the sea creatures that feed on them to do the same.

Gerry McChesney is manager of the Farallon National Wildlife Refuge and the common murre restoration project for the U.S. Fish and Wildlife Service. Since gill net fishing and an oil spill killed thousands of common murres in the 1980s, the common murre population has rebounded. Thanks to restoration efforts, the birds have recolonized Egg Rock off Devil’s Slide Trail and the population is considered “quite healthy” in terms of its numbers, according to McChesney.

Both domoic acid poisoning and starvation due to a lack of accessible fish are being investigated as possible causes for the die-off, McChesney says.

“All summer through the north Pacific Ocean there has been a lot of warm water, and it usually means low prey availability,” McChesney said. “But we’ve had a strip of cold water near the coast (of Half Moon Bay), concentrating anchovies and mackerel. With what seems to be all this food up against the coast, why these murres are dying, I’m still baffled by.”

Roletto pointed to lack of appropriately sized fish for the chicks due to warmer water as a possible reason for the die-off.

“There are coastal sardines and anchovies in the area, but these are too large for some species of chicks to swallow and many of the murre chicks still cannot fly, so they are limited to prey resources wherever they can float or swim,” she said.

All this has led to a spike in dead murres appearing on beaches up and down the coast. Those that are rescued in time are being brought to area wildlife centers.

At the International Bird Rescue’s Fairfield center, starving common murre chicks are tube fed a “fish smoothie” upon arrival and kept indoors until they appear strong enough to go outside. Then they’re released into diving pools, where they feed on fish.

“It’s been a hard summer for a lot of these common murres,” Curtis said.

The good news, according to McChesney, is that this die-off isn’t expected to affect the overall common murre population since it’s primarily afflicting birds that are years away from breeding. If more adult murres began dying, which McChesney said is possible with El Niño’s presence, that would raise concerns.

With the exact cause of the die-off still unconfirmed, wildlife experts will continue to track common murres, as they’re considered a good indicator of overall ocean health.

“I hope that documenting this will tell us something about what the problem is, but we might have to see some other problem in the ocean before we understand what’s causing the die-off,” McChesney said.