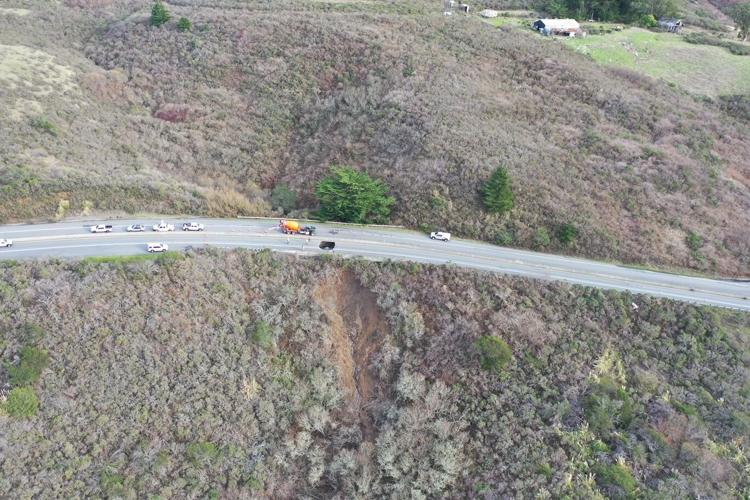 The sinkhole on Highway 92 can be seen clearly from above. Photo courtesy Caltrans 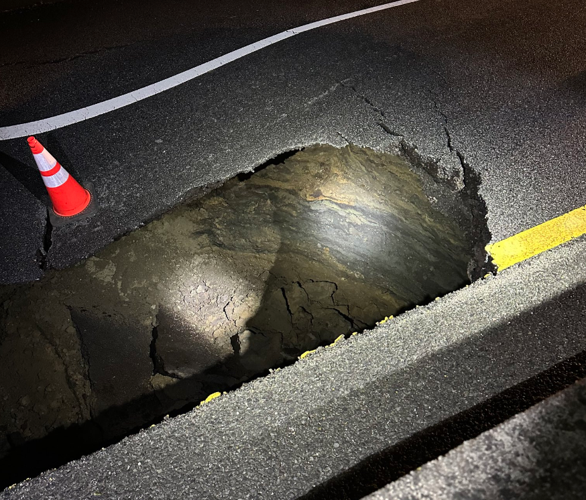 Highway 92 is shut in both directions on Thursday morning as traffic engineers deal with a sinkhole. Photo courtesy CHP

The sinkhole on Highway 92 can be seen clearly from above. Photo courtesy Caltrans

Highway 92 is shut in both directions on Thursday morning as traffic engineers deal with a sinkhole. Photo courtesy CHP

Updated 5 p.m.: Highway 92 was closed in both directions early Thursday morning while Caltrans crews worked to discern whether any of the lanes were safe for travel after a large sinkhole opened up in the westbound lane.

There was one-way traffic getting through for the Wednesday night commute after crews began to evaluate what was causing a dip in the westbound lane just west of upper Highway 35. But Caltrans spokesman Pedro Quintana said it was closed entirely after crews became concerned about the eastbound lane as well.

“I know this is a big inconvenience for residents," said Quintana, who added he once lived in Half Moon Bay. "We should have a better idea this afternoon."

What they learned through the course of the day was apparently not good. There was little word on when the problem would be resolved or what it would take to fix it. Quintana said the concern was for a "pavement failure" that would occur if the pavement sinks along with the ground underneath.

The closure presumably also effects emergency vehicle access. At various times through the night Sheriff's deputies told dispatchers the road was closed to emergency vehicles, then open but that they couldn't get through quickly. It was not clear whether emergency vehicles could use the eastbound lane in an emergency.

I think it will be “better” in a few days when they “patch it” and figure out a more suitable repair after the the rain stops. Meanwhile, weed those drainage grates and clean out the debris and trash that has been collected but neglected!

How about some new news and photos?

In the aerial picture you can see the gully in the upslope that channels water directly down to the road and that gully continues below the road. The road is basically interrupting the natural flow of water through the gully. They have to build a bridge across the gully and let the water flow uninterrupted below the road. This is a major project to fix.

Deep breaths and go to your happy place for a while.

Uhh yeah. This does not seem like an easy fix for Cal Trans folks. The entire section of roadway in this area seems like it needs to have its underlying foundation rebuilt with proper drainage installed under the foundation to prevent this from happening again. Worst case: Cal Trans takes months to fix like 2005 Devil's slides closure. Alternate case: Cal Trans does a quick fix and kicks the can down the road, risking future problems.

Next time you are out there, look on the north side of the passenger side barrier. See if the soil that used to be in this cavity has flushed down the slope. A challenging fix indeed.

A smart cookie told me that you can see the metal pipe that used to be at this location by using Google Maps. You'll need to max zoom. Looks like a broken pipe connection over time led to the undermining.

I think this is the section of the road in question

The area where the "pipe" is/was is not the same as where the sinkhole is. There's no large cypress tree directly across from the pipe on Google maps. The sinkhole looks to be 100 yards further down from where the pipe is/was.

Odd, but the cypress tree shows up in Google street view.

I can envision beam supported highpass road to bypass the corners starting from Crystal Springs to the Northpole tree farm or even to the Main St. Can't rely on natural soil to support road surface forever. Most modern highways and high-speed rails are built on high beam supported structures. We the old USA infrastructure still has ways to catch up.

Should be super fun during the next round of storms when the traffic lights predictably fail again on Hwy1 at Main St, Coronado, and Linda Mar.

Sure hope Caltrans gets Hwy. 92 fixed for All the commuters in a timely manner....this is going to make traveling up and over thru Pacifica a mess...Hopefully things will be better in a few days for all...

UPDATED 10:25 a.m.: Rain let up a bit late Monday morning on the coast, but Californians fro…

Recent rains rank among wettest days ever recorded on coast

It was dry on the coast on Saturday morning, but area residents cast a wary eye to the threa…

Coastsiders gird for next wet-weather system

There are now widespread power outages across the coast. PG&E reports that thousands of …

2022 brought life back to Coastside

The past year demonstrated the determination, and tested the patience, of many people trying…