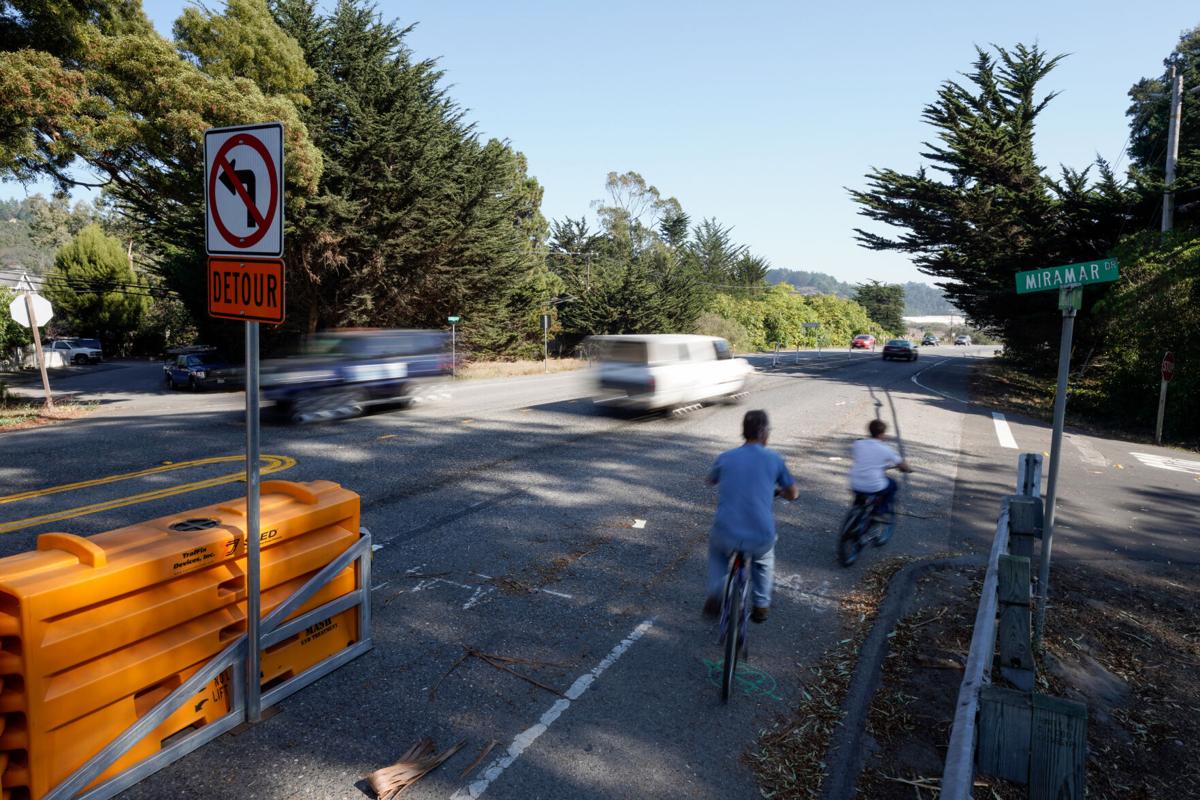 Two bicyclists make their way off of Highway 1 and on to Miramar Drive while the Medio Bridge closed on Friday, Oct. 30, 2020. Adam Pardee 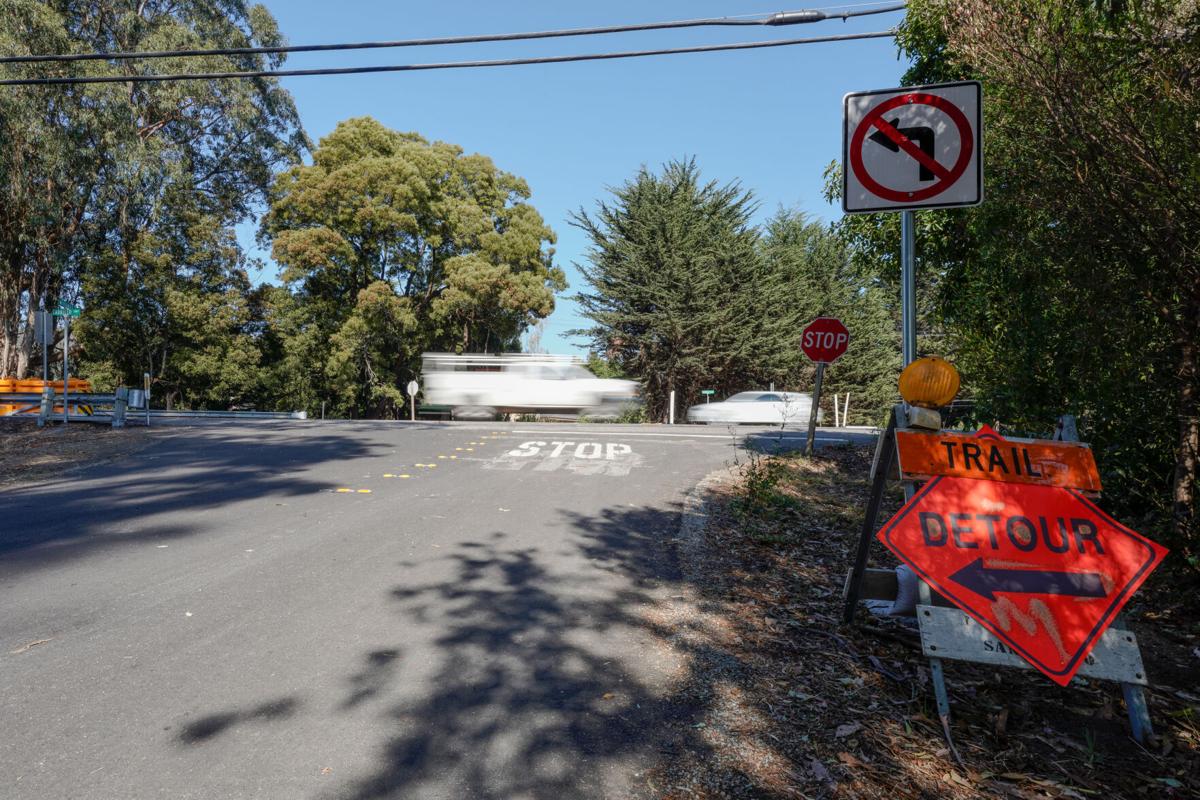 The current detour for pedestrians and bicyclists takes them on to the shoulder of Highway 1 while the Medio bridge is closed on Friday, Oct. 30, 2020. Adam Pardee / Review 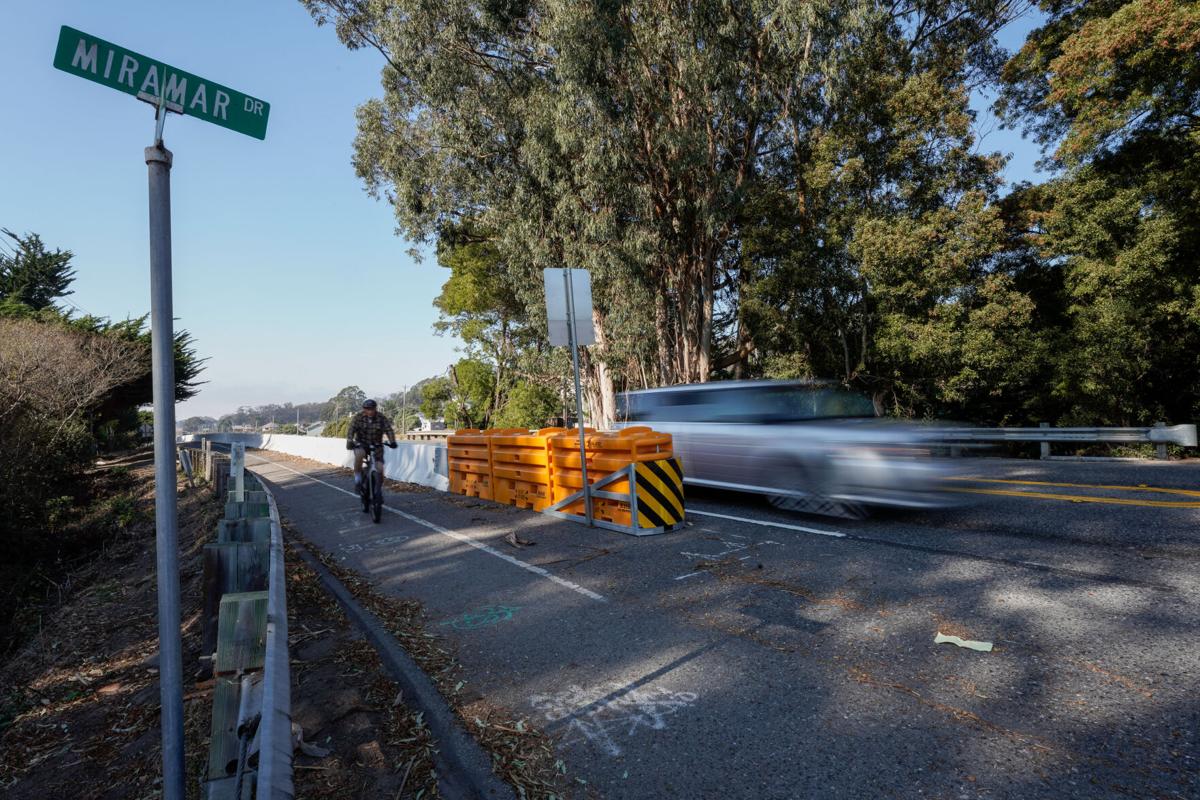 A bicyclist makes his way off of Highway 1 and on to Miramar Drive while the Medio Bridge closed on Friday, Oct. 30, 2020. Adam Pardee

The closure of a key segment of the California Coastal Trail through Miramar and its reroute along Highway 1 has prompted discussion and backlash among Miramar residents.

In late July, San Mateo County officials closed the Mirada-Medio pedestrian bridge, a key connector of the Coastal Trail, due to structural issues. County Public Works Director Jim Porter said the county plans to build a replacement bridge during the summer of 2021, rerouting the trail along Highway 1 until it is complete. Those plans are still in motion, but Midcoast residents have ideas of their own.

At last week’s Midcoast Community Council meeting, members approved a letter to Porter outlining concerns with the proposed replacement bridge, notably its location and effect on erosion. The letter proposes building the bridge farther inland at Alameda Avenue as a longer-term solution.

Residents of Alameda Avenue spoke against the letter and Councilman Dan Olson’s presentation displaying an alternate route through their neighborhood. They asked for more time and a deeper study of new routes.

“This took us by surprise,” Alameda Avenue resident Ethan Miller said. “No one reached out to us. This proposal ... would do incredible harm to our neighborhood.”

Porter said he will be attending the council’s Dec. 9 meeting to give an update, but that the bridge replacement at its current location is moving ahead as planned. Barring any permit denials, the bridge will be built come summer.

“We’re going full steam ahead unless there is a regulatory issue that causes us not to construct the bridge,” Porter said.

It’s not just residents on the west side of the highway who are affected by the recent route changes in the neighborhood. Miramar residents living east of Highway 1 say the new detour, which pushes traffic east on Highway 1 to make way for a protected bike and pedestrian lane, has made getting out of their neighborhood unsafe.

With east Miramar resident Joanne Brooks at the helm, they’re asking for an emergency response from Caltrans to create a safe crossing for the more than 50 households on the east side of the highway.

Brooks has been advocating for a safe crossing for east Miramar residents for the last two years. She is disabled, which makes safely crossing the highway with no pedestrian infrastructure particularly difficult. Now, with the detour blocking east Miramar’s access points and making a left turn virtually impossible, she and her neighbors are calling for a traffic light and crosswalk where Alto Avenue and Mirada Road intersect Highway 1.

“The way that they put up that detour has left us with one exit from our neighborhood and the visibility is horrible,” Brooks said. “I believe that this emergency detour requires an emergency response because of the added safety issues it created.”

Now, east Miramar residents, inspired by an idea from Brooks’ son, are advocating for a new solution to solve both their problems and those of their west-side neighbors: reroute the Coastal Trail down Mirada Road and across the highway to meet with the approved Parallel Trail segment along the east side.

“This is the perfect opportunity to connect the coast earlier in a more efficient and cheaper way,” Brooks said.

MCC Chair Len Erickson said he doesn’t believe it’s within the MCC’s purview to declare the situation an emergency, but he’s passed on the concerns and ideas proposed by Miramar residents to Connect the Coastside planners to integrate into their next draft, and is looking into removing some of the trees that block visibility sooner rather than later. He said the topics will be taken up again at the MCC’s December meeting.

“There isn't a simple answer at this point,” Erickson said. “The MCC is looking for further discussion.”