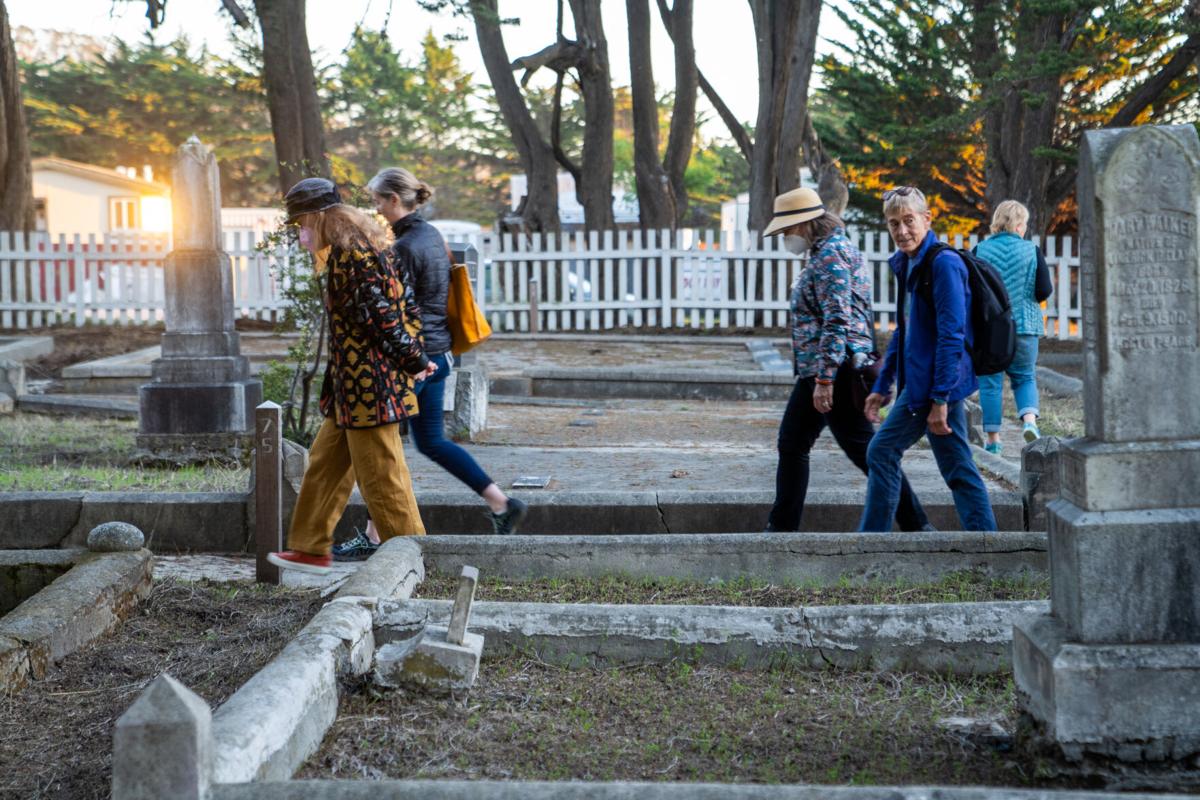 Attendees to the Odd Fellows Cemetery walk enjoy chili before embarking around the site in Half Moon Bay. Adam Pardee / Review 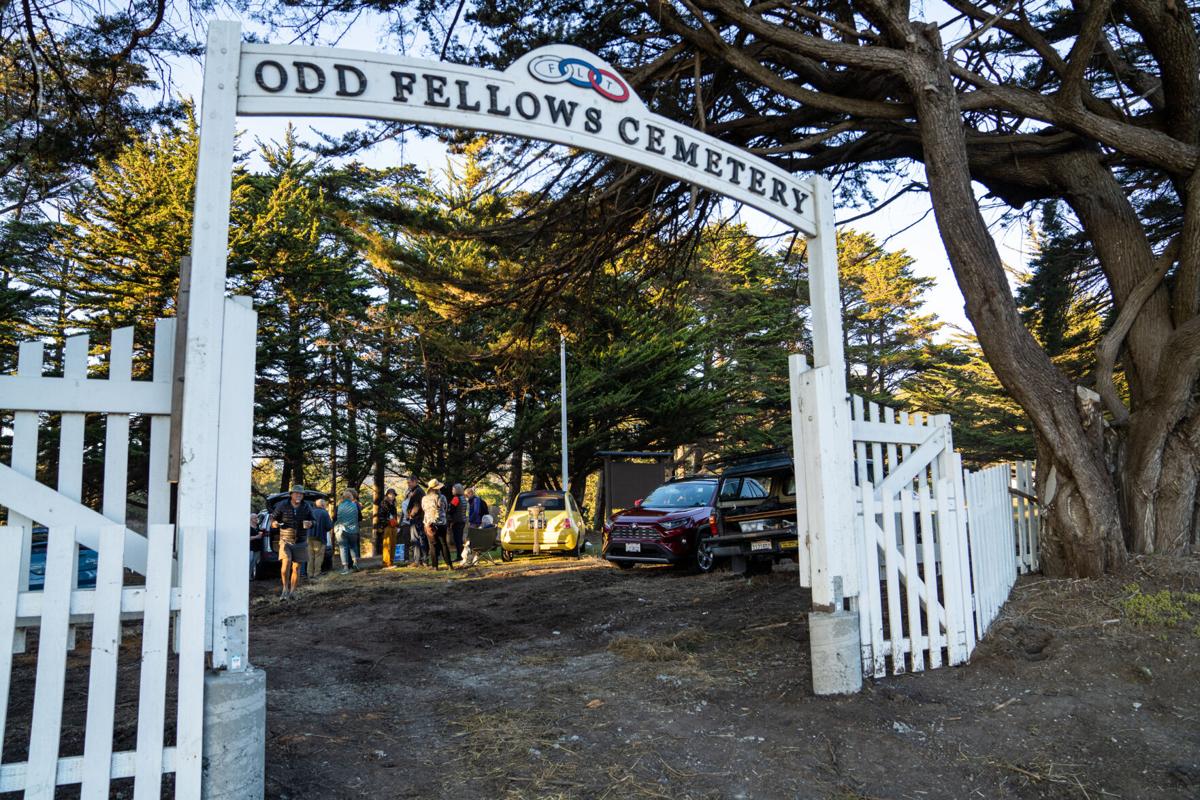 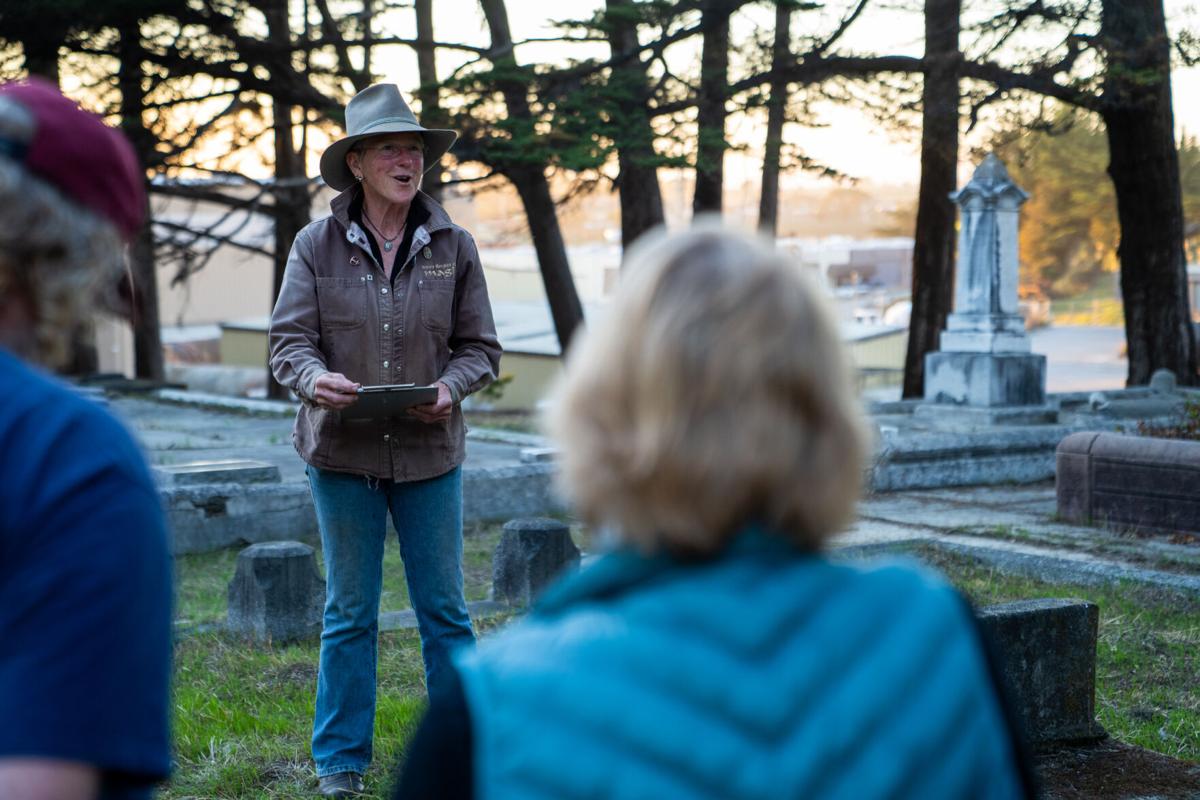 Jan Tiura speaks at the first stop of the Odd Fellows Cemetery tour in Half Moon Bay. Adam Pardee / Review

As the sun set on Thursday evening at the Half Moon Bay Odd Fellows Cemetery, members gathered clutching mugs of “Graveyard chili,” in the organization's annual visit to the cemetery.

“Every year we gather together and have a tradition of meeting and visiting the gravestones,” said Joe Brennan, member and board member of the Odd Fellows.

Every year, on the Thursday before Halloween, members meet and walk to different graves around the cemetery and people share stories about those they knew or the stories that have been passed down about them over the years. Some years they have historians and anthropologists come as well to talk about the history of the people who are buried there.

“I think it’s a reverence for our forebears and the people who were prominent in the history of Half Moon Bay,” said Brennan. “It’s keeping alive our heritage and honoring them.”

Many names from the graves like Hatch and the Johnstons are commonplace on the coast now.

“As time goes by it becomes more and more important,” said Marty Steiger, noble grand of Half Moon Bay Odd Fellows. “This place is history; it’s been around since the town was founded.”

Nestled just off of Highway 92, the three-acre cemetery can be seen as one enters Half Moon Bay. Established in 1875, the cemetery hosts an estimated 500 people, according to a recent cemetery historical report conducted by Laura Jones, an archaeologist and historic preservation specialist at Stanford University.

“Because most of the graves have no surviving tombstones, that is very difficult to be precise about,” said Jones in an email to the Review. “We decided to document as many of the graves with people’s names as possible, as close to their actual locations as possible, so that family members would have some place to visit.”

Using the records from the Odd Fellows, information from local residents, the original cemetery map and funeral home records, Jones built a spreadsheet with the names and a map of the cemetery. They were able to confirm 500 burials, by name and another 30 that couldn’t be confirmed.

“The funeral home records were especially sad to read,” said Jones. “So many tragic stories and grieving family members. I printed the booklet to serve those families and provide them some peace of mind, so that their relatives' final resting places will not be lost. The Odd Fellows have been a terrific community partner in providing that information to family members who are looking for someone.”

The Odd Fellows originally organized in England in the 1700s with a mission to “visit the sick, relieve the distressed, bury the dead and educate the orphan.” The lodge on the coast was founded in 1868, the cemetery was constructed soon after in efforts by members to bury locals who died.

The land and cemetery now belong to the Andreini family in Half Moon Bay, but the Odd Fellows are still involved in upkeep of the historic space.

“What’s a community if it isn’t the people that built it in the first place?” said Jan Tiura, a member of the Odd Fellows. “Understanding that and appreciating these people is important. By coming to the graveyard, you get an understanding of where the street names come from and the very founders of Half Moon Bay.”