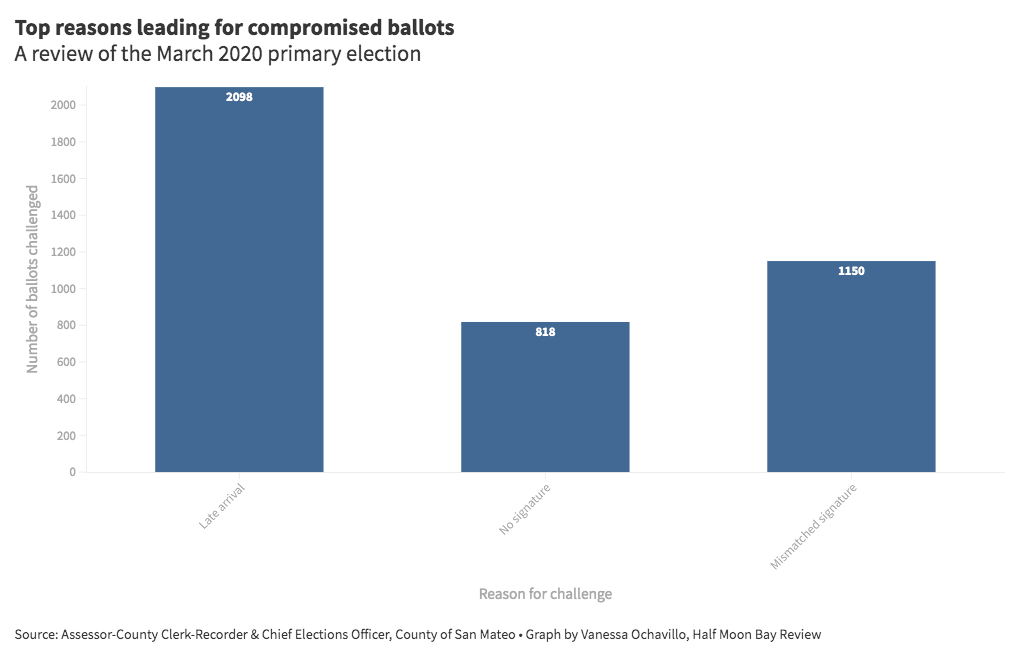 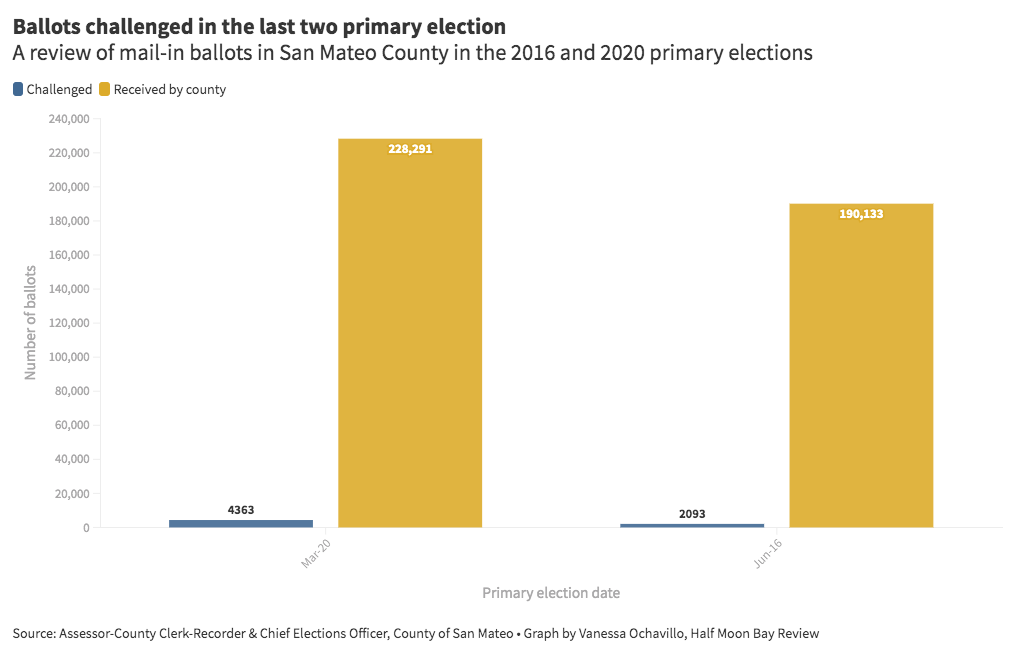 In the March primary election, just over a thousand ballots were rejected because of mismatched signatures, late arrival or any number of problems. With the election about a month away and some voters just days away from receiving their mail-in ballot, the Review looked into the most common mistakes people make when voting.

Data from the San Mateo County Assessor-County Clerk-Record and Elections Office showed that the top two reasons for ballot rejections for mail-in ballots in past primary elections were late arrivals and mismatched signatures.

We looked at some of those errors and how to avoid them this election cycle.

Late ballots: Ballots are considered late and are therefore not counted when they are postmarked after the day of the election, received three days after Election Day or — after a request for a correction usually made through a “cure” notice — are not received within two days of certifying the election.

In the March 2020 primary, 48 percent of challenged ballots arrived late. These were automatically rejected.

Signatures: Every mail-in ballot envelope must be signed in order to be counted. Problems with signatures lead to hundreds of challenged ballots each year.

First, people forget to sign the envelope — not the ballot, the envelope. In the March 2020 primary, 818 ballots were challenged because they lacked a signature.

Resolving ballots: Because ballot mistakes are so common, it’s not the end of the road if a ballot is “challenged.”

Jim Irizarry, assistant assessor-county-clerk-record and assistant chief elections officer, explained that every ballot is handled by humans, namely county election officials. These employees are aided by a computer program that processes each scanned document and compares, pixel by pixel, the signature on the envelope and digital signature in a voter’s registration file.

“Where there is a discrepancy, then it moves into different layers of review and approval. Then at the final layer — (and it) can go up to five times if it goes up to a supervisor — a letter is sent to the voter.”

Of the ballots that were challenged due to a mismatched signature, 1,194 were “cured,” meaning these ballots were correctly signed and received within three days of the election being certified.

Some advice: Since March, new provisions have passed that Irizarry hopes will make for a smoother election.

In the upcoming election, the county can begin processing ballots as they come in, through mail-in voting and early in-person voting, as early as 29 days before Election Day. In the past, the county could only begin counting 10 days prior to the polls closing.

Additionally, mail-in ballots received within 17 days of the election — so long as they are postmarked by Election Day on Nov. 3 — will be counted. Before, ballots needed to reach the county within three days.

Though the new 17-day grace period should help, Irizarry said, if voters want greater assurance, they can drop off their ballot at any of the 39 drop-off locations or 42 voting centers in San Mateo County, including New Leaf and in the parking lot of City Hall in Half Moon Bay, and the La Honda Fire Brigade and Station 59 in Pescadero.

Voters who wish to track their ballot can use the online tracking tool at smcacre.org/wheres-my-ballot, but must register for the service ahead of time. The tool will tell voters when the county mailed out the ballot and when it arrived at their doorstep, but the tracker does not provide information about a challenged ballot.

Voters can get more information on whether a ballot has been challenged by logging onto the voter registration website at https://www.smcacre.org/my-election-info or by calling the county elections office.

In the March 2020 primary some San Mateo County ballots were rejected for fairly unusual reasons.