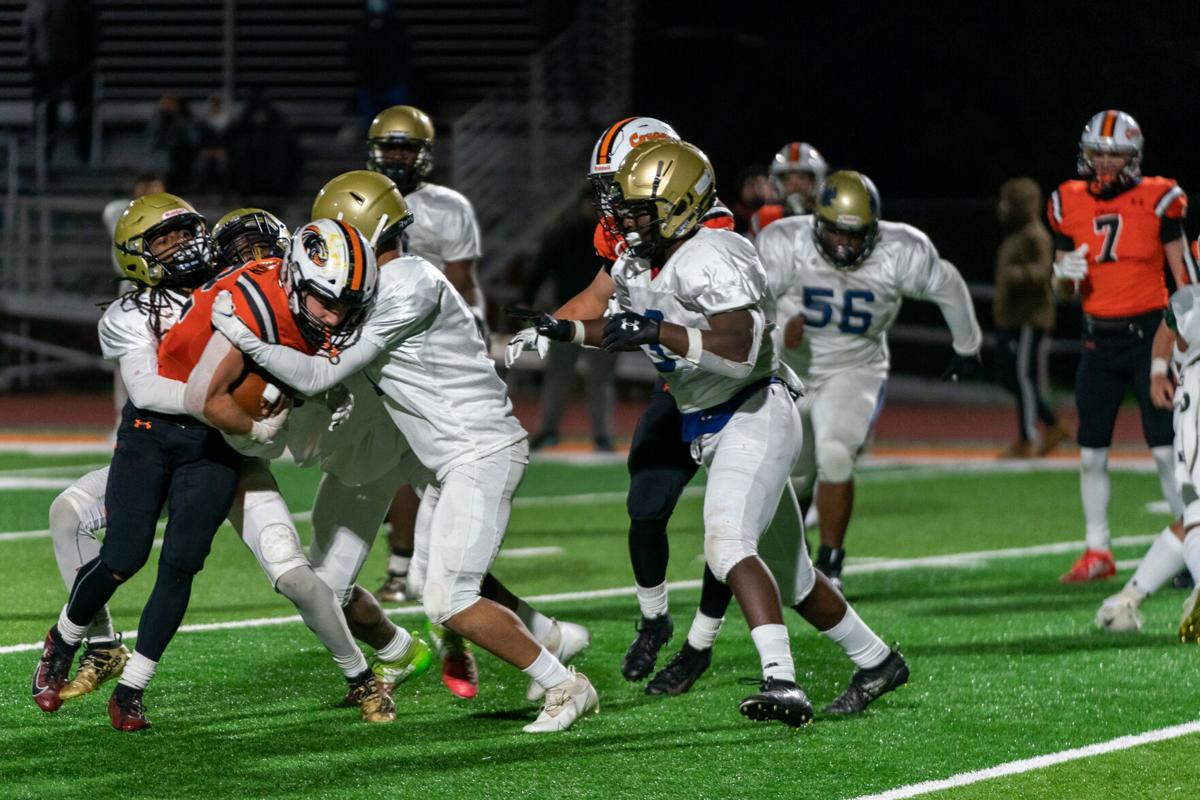 Running Back Tristan Hofmann runs the ball during the Cougars' win over Stellar Prep 47-14 on Friday, March, 26, 2021. Adam Pardee / Review 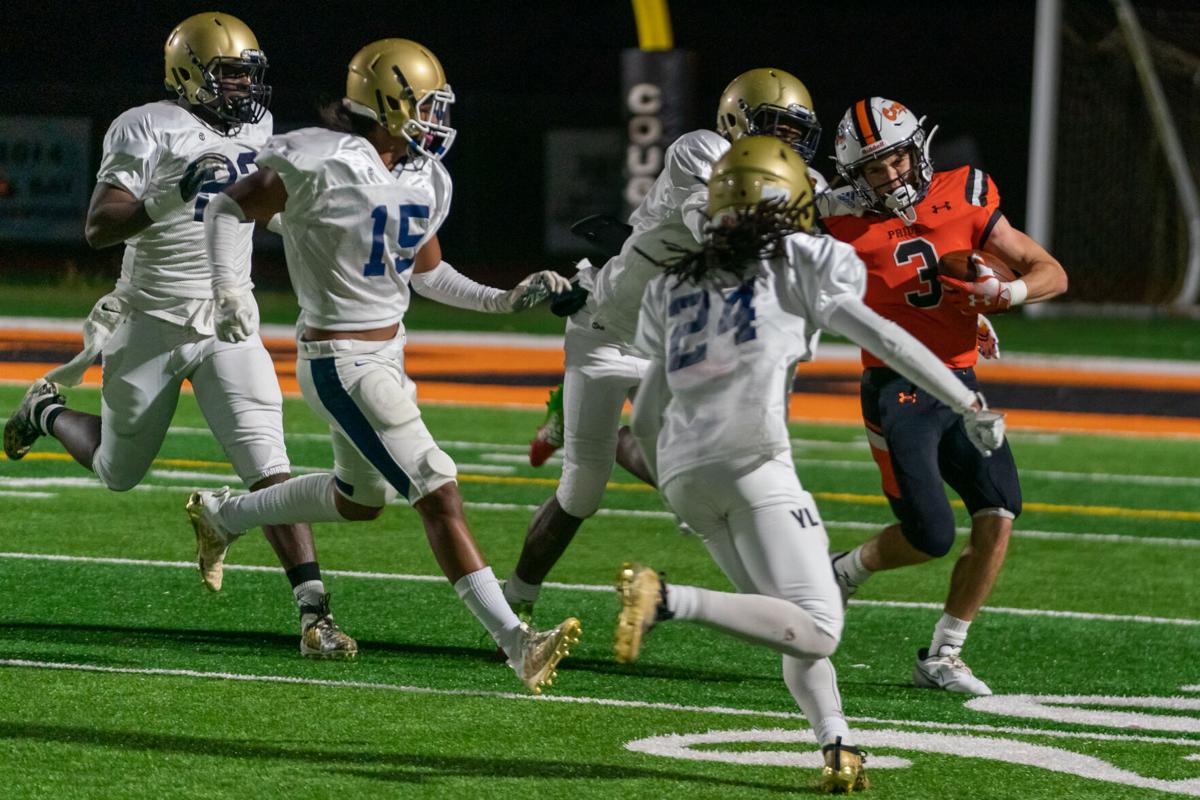 Quarterback William Moffitt sprints down the sideline during the Cougars' win over Stellar Prep 47-14 on Friday, March, 26, 2021. Adam Pardee / Review 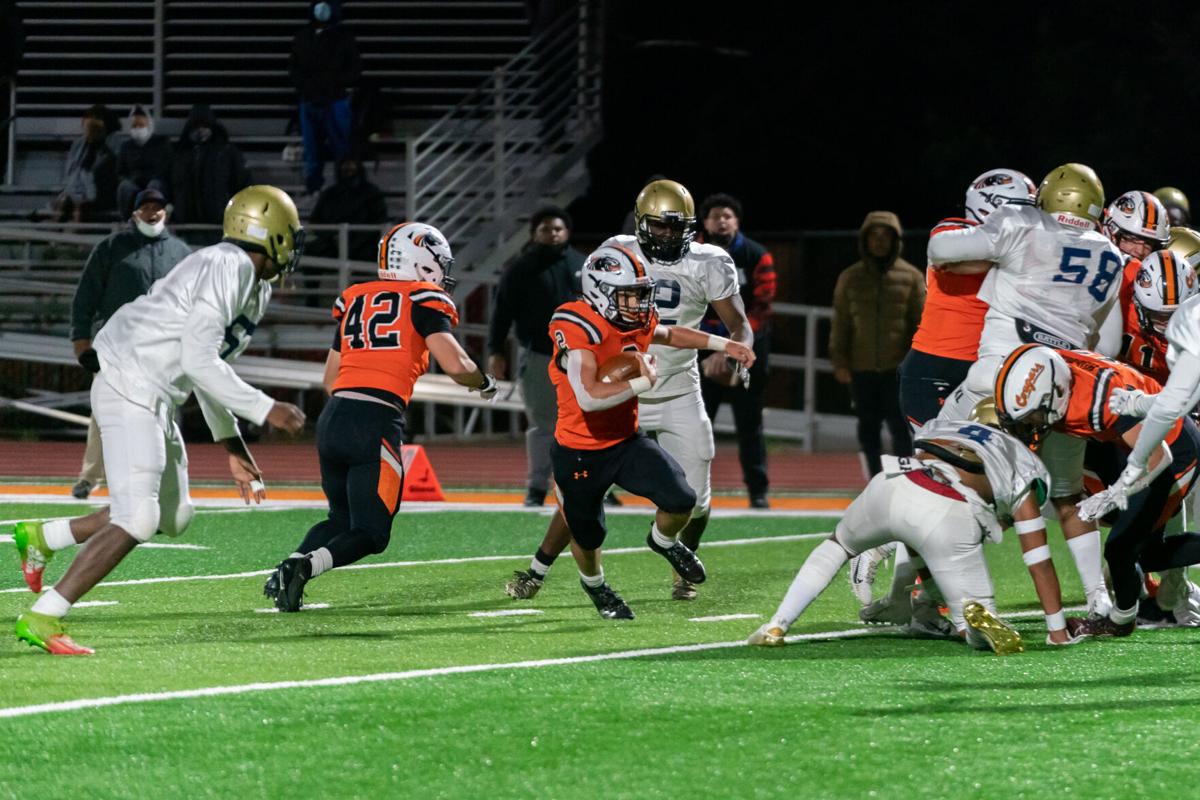 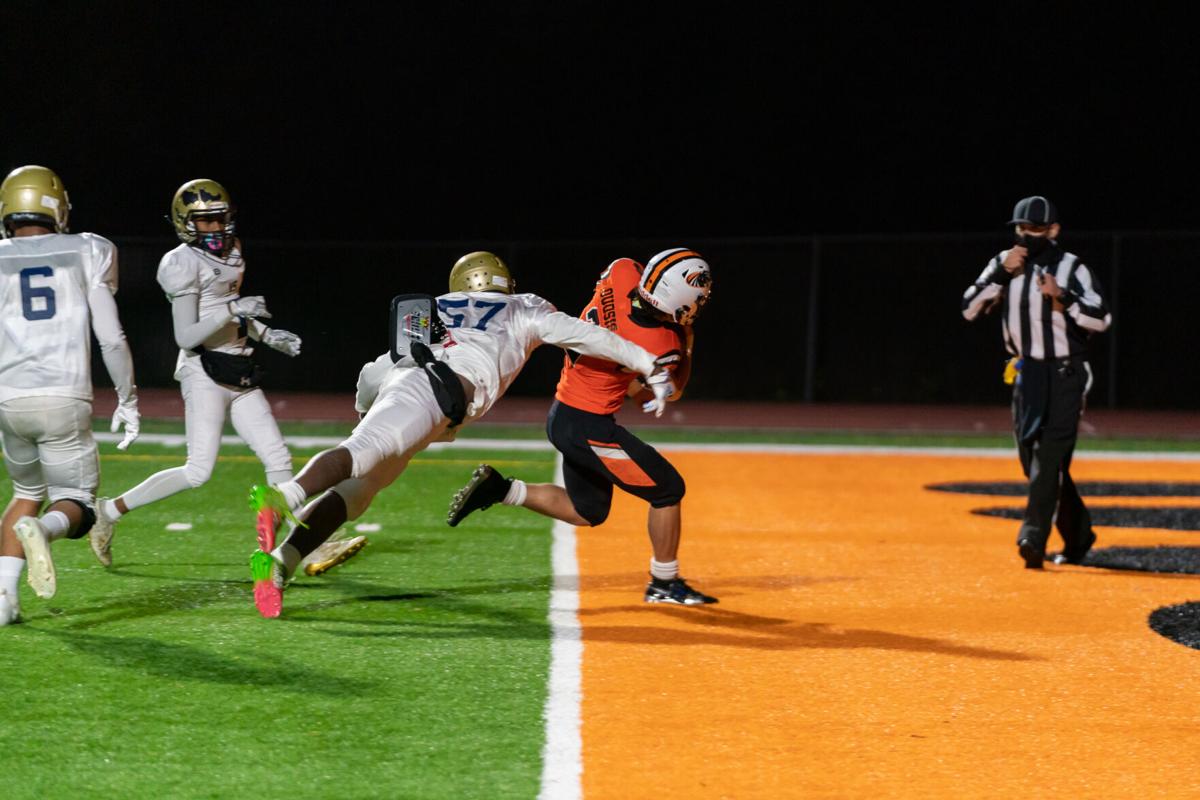 Connor Quosig rushes for a touchdown during the Cougars' win over Stellar Prep 47-14 on Friday, March, 26, 2021. Adam Pardee / Review 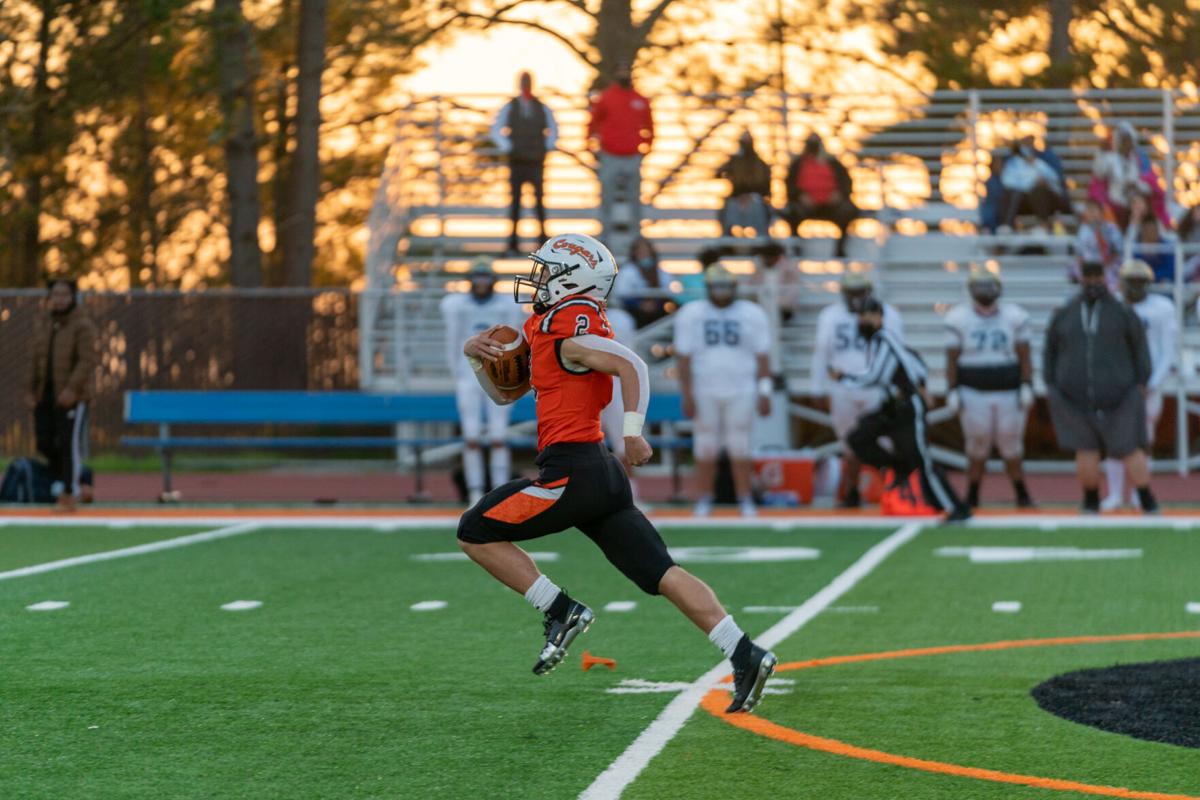 Connor Quosig returns the opening kickoff for a touchdown during the Cougars' win over Stellar Prep 47-14 on Friday, March, 26, 2021. Adam Pardee / Review

By the time the lights went out — as Half Moon Bay High School’s Tristan Hofmann was carrying a host of defenders into the end zone with 5:41 left in the third quarter — this was already the strangest football game in Coastside memory.

It began 15 minutes late, as a skeleton crew of only three referees (there are supposed to be seven) was still assembling at game time. The first play of the game was a squib kick that Cougar speedster Connor Quosig scooped up before sprinting 70 yards to put the Cougars up 6-0. On that very play, it at first appeared that a member of the Stellar Prep Thunder special teams had been hit with an unsportsmanlike conduct penalty and ejected, but he remained in the game. All this in the first 12 seconds.

The game was marred with a 45-minute first-quarter delay due to a scary injury suffered by Cougar defender Peter Valdez. It was eventually won by Half Moon Bay, 47-14, and included some vicious hits and a whole lot of smack talk.

The game itself came together in unusual fashion. Stellar Prep Coach Desmond Gumbs said he got a call from Cougar head varsity Coach Keith Holden. “He called a couple of weeks ago and said do you guys need a game?”

Gumbs, whose Thunder play in North Coast Division 7, was grateful. His Hayward team had yet to play this year. He also knew what he was getting into traveling to Half Moon Bay, which had already played two games this surreal pandemic season. He knew the Cougars to be a regional powerhouse.

“We only have 16 kids,” he said before the game. “It’s ironman football for sure. But we’re just glad to be playing.”

“It was a weird one,” Holden acknowledged. He said the game came about through a series of scheduling headaches, including efforts to accommodate Terra Nova and an evolving football plan from Jefferson Union High School District. Holden said he was left with a dark week until a St. Ignatius assistant coach suggested he call Stellar Prep.

Ironmen, the visitors were. Most of the outnumbered Thunder played both ways and hard. The game was tied at 14 at the half.

The Thunder went up 8-6 in their drive following Quosig’s kickoff return for a touchdown. The score came on a Sefa Stephens to Damani Burrell 5-yard pass play. The 2-point conversion was good. Later in the quarter, Stephens found Dairione Coleman near the goal line and the Thunder were up 14-6.

The Cougars went to their jumbo package late in the first quarter and the combination of Quosig and Hofmann proved formidable. Quosig got his second touchdown and also ran the ball in for a 2-point conversion with 9:52 remaining in the half to tie the game at halftime.

A third quarter fumble gave the Cougars good field position and they capitalized for Quosig’s third TD of the game to make it 21-14 and the rout was on. The Cougars scored the last 41 points of the game.

Hofmann’s “lights out touchdown” with 5:41 to play in the third quarter made it 27-14. Half Moon Bay High School Principal John Nazar said the lights were on a timer and no one considered a football game extending beyond 10 p.m.

Hofmann scored again later in the quarter. Wideout Nohea Sharp made a beautiful catch in the corner of the end zone in the fourth quarter, and quarterback Will Moffitt ran it in for the last touchdown of the game.

In the end, the Cougars went 2-1 on the season and showed they could come together after falling behind.

“I thought in the first half we got distracted from the fundamentals,” Holden said. “Our kids didn’t do what they needed to do. In the second half we started taking the emotion out of it and played fundamentally sound and good things happened from there.”