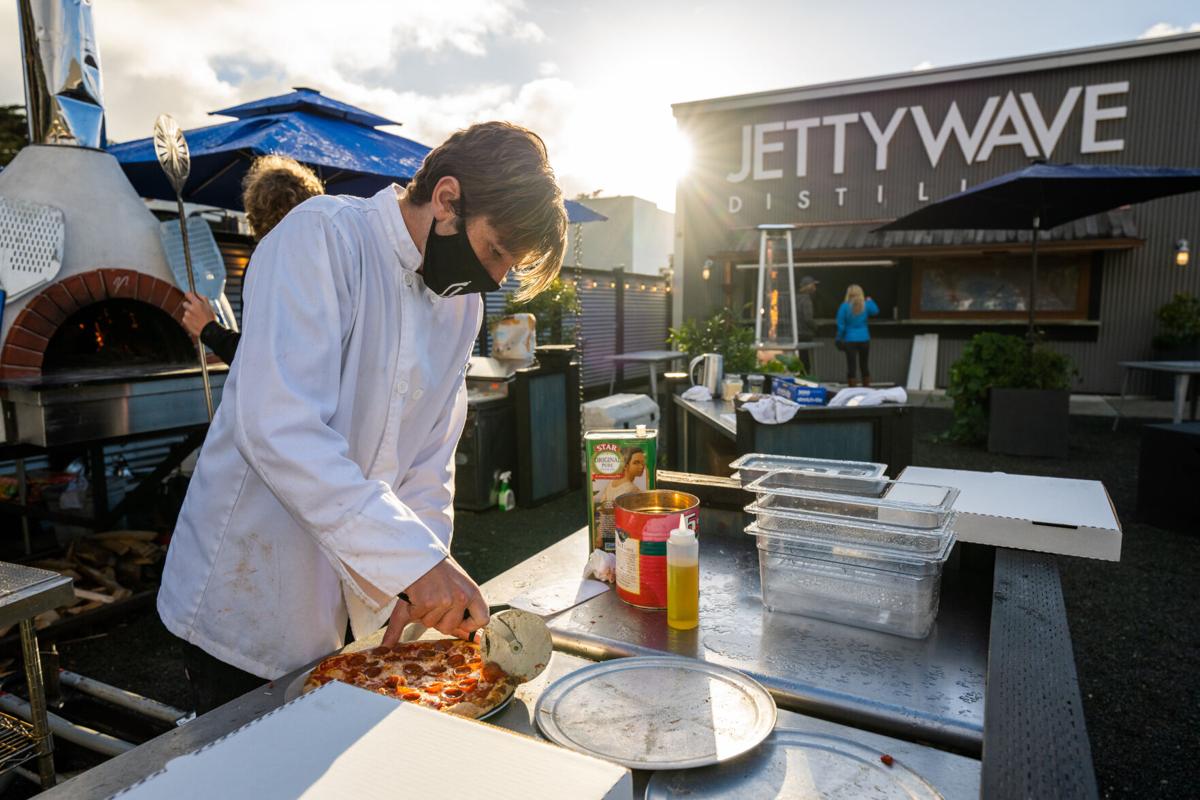 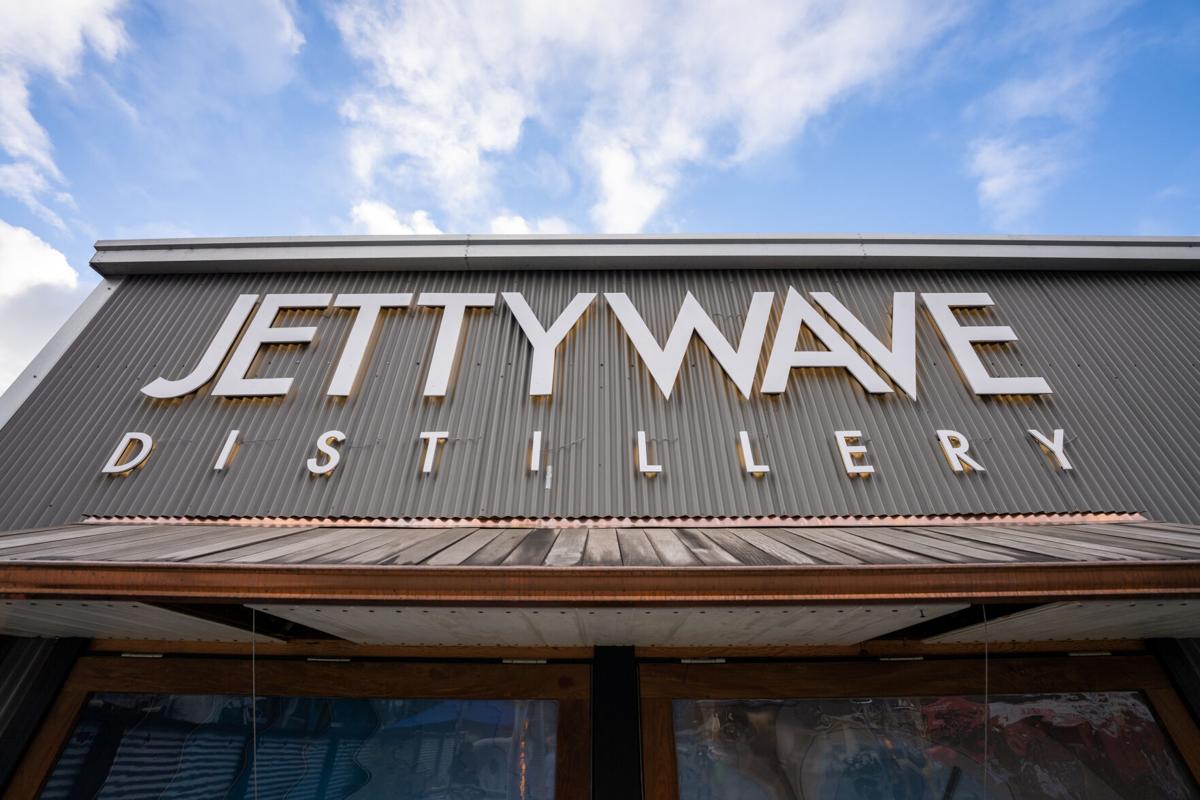 Jettywave Distillery's sign is the first thing you see as you drive down Prospect Way in Princeton on Friday, Jan. 22, 2021. Adam Pardee / Review 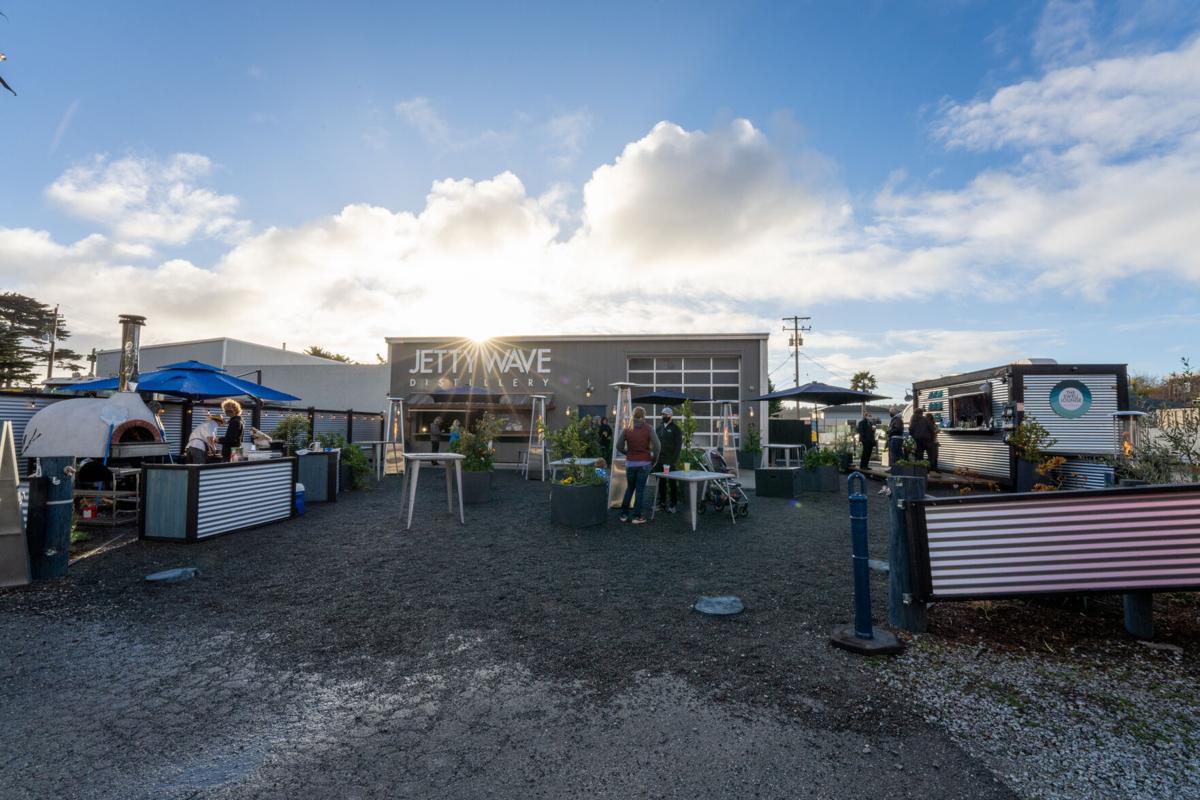 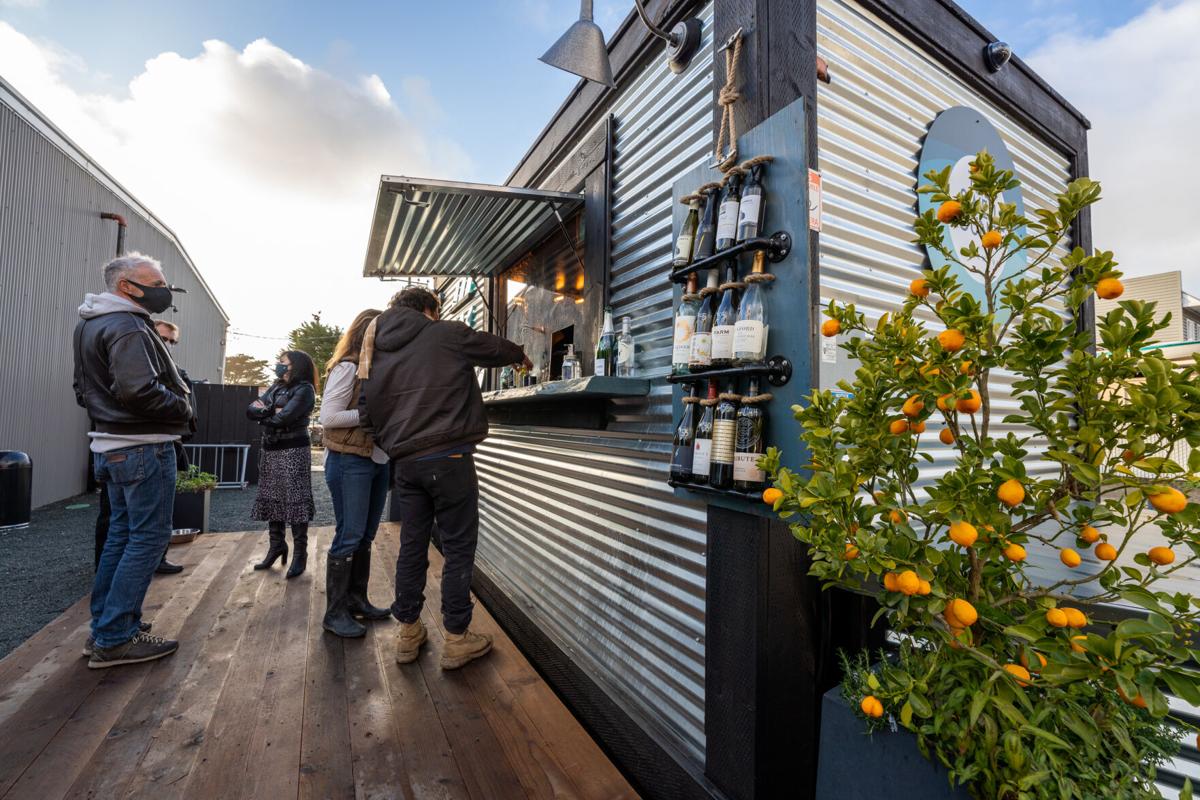 To understand what Jettywave Distillery is all about, look no further than its outdoor Swell Lounge. The assortment of potted limes, mint, rosemary and thyme are not just for aesthetics. Each plant is used in the assortment of original cocktails, with names like “Beach Trail Bingo,” “Humpback Migration” and “Harbormaster’s Old-Fashioned” now available from Princeton’s newest watering hole.

Jettywave is the result of a lot of work from many individuals, but it started with Coastsiders Mishelle and David Westendorf. The couple have established business backgrounds. He works with tech startups and Mishelle is a business owner. But Jettywave, located in what used to house the Half Moon Bay Distillery, is a new venture for them and their partners.

The distillery’s philosophy centers around organic and locally sourced ingredients, but the ownership group has its sights set for Jettywave to become a family-friendly community gathering space. The plans to utilize Jettywave’s space are as creative as its cocktails and go beyond outdoor showers and bike racks.

Eventually, the plan is to host corporate events, nonprofit fundraisers, movie nights and even a farmers market. There will also be classes for those interested in learning about the distilling process, in which you can tour the distillery, study the methods, and practice bottling and labeling the alcohol firsthand.

“We want to make this place open to the whole community,” said Mishelle Westendorf, who is the distillery’s CEO.

While it will be roughly eight weeks until it’s fully operational with stills installed, Jettywave is now open for takeout from 11 a.m. to 7 p.m. Friday through Sunday. There is also fresh pizza from the outdoor stone oven. To learn more about the new distillery, visit jettywave.com.

The Westendorfs conceptualized the distillery just as the pandemic began. When Half Moon Bay Distillery made plans to move operations a few blocks away, the Westendorfs and their partners leased the old warehouse. The building has been under renovation for the last six months. The result is a slick modern design, with an expansive stainless steel and copper facade mixed with an ocean-themed colorway throughout the premises. The drink menu is displayed on surfboard fins handmade by David Westendorf. Jettywave’s style is a direct result of diverse ownership, which is composed of five partners, each of whom brings a different skill set to the table. David Westendorf, a Stanford Research Institute entrepreneur, carved and installed the building’s reclaimed wood. Mishelle and Lucy Gilles, the chief operating officer, both know real estate. Tanya Syle and her husband, Richard, are both responsible for the distillery’s herbs and landscape design.

Anthony Marinese beat out 11 other competitors for the head distiller position. For the Westendorfs and the other partners, Marinese has been a dream hire who they say is full of creative foresight, ingenuity and talent. They say Marinese has the patience and imagination to work on a community-centered service rather than an industrial operation.

“We all had an interest in making sure whatever we do here, our family and community can come to it,” Mishelle Westendorf said. “And the distillery isn’t a bar, it isn’t just for 21-year-olds. That was important to us. We want dogs and kids here.”

Marinese will produce vodka, gin, whiskey and the distillery’s new trademarked moonshine, Half Moon Shine, in six stills that are being forged in Colorado. Some will be as large as the 150-gallon stripping still, others smaller, like the 26-gallon column for finishing gins and vodkas. And don’t be surprised if at some point the vodka is made from salty seaweed pulled by Marinese just down the street.

Marinese earned national acclaim for his work in New York. But it wasn’t just his expertise in brewing spirits that made him an ideal candidate for Jettywave. Marinese is using a sustainable and eco-friendly approach throughout the distilling process. This includes using reclaimed wood for mash tanks, conserving water and even giving leftover mashed grains to Pescadero farmers for their livestock. This “circular economy” is a driving force for Marinese to keep all aspects locally sourced.

“Everything is coming in from less than 100 miles,” Marinese said. “It’s going to be something totally unique to this area.”