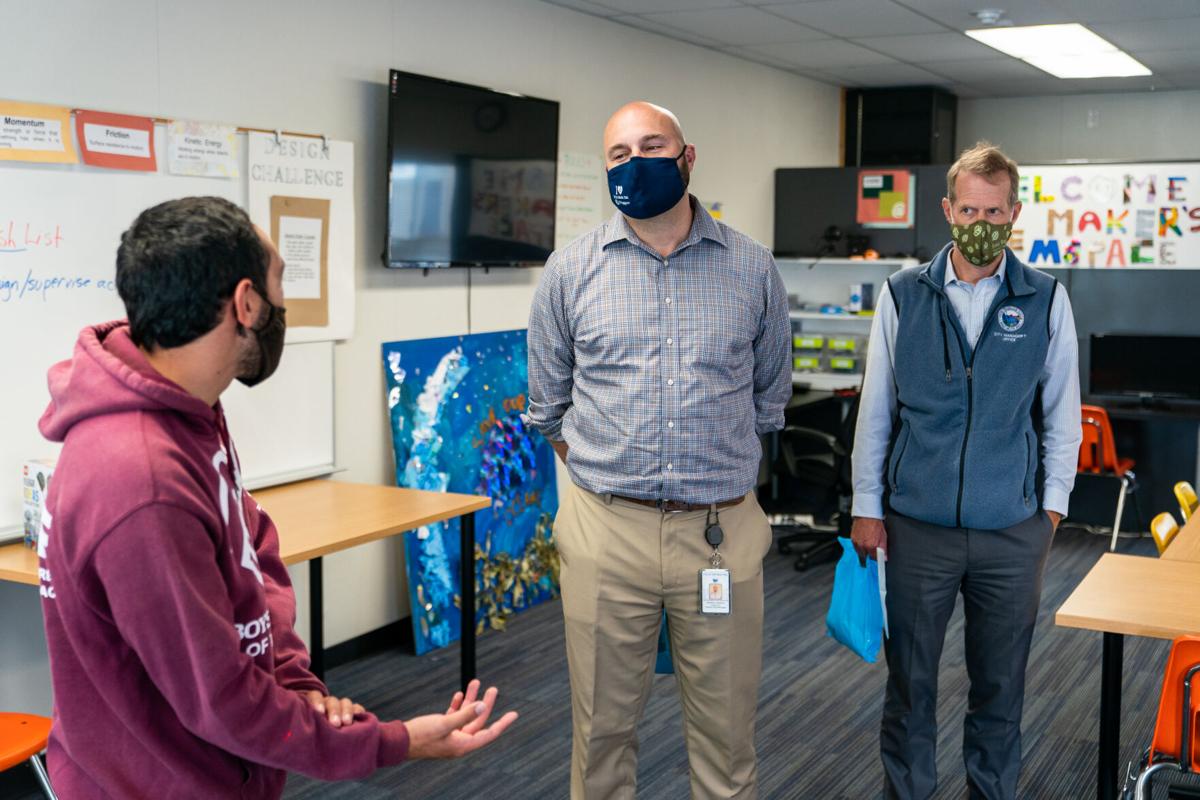 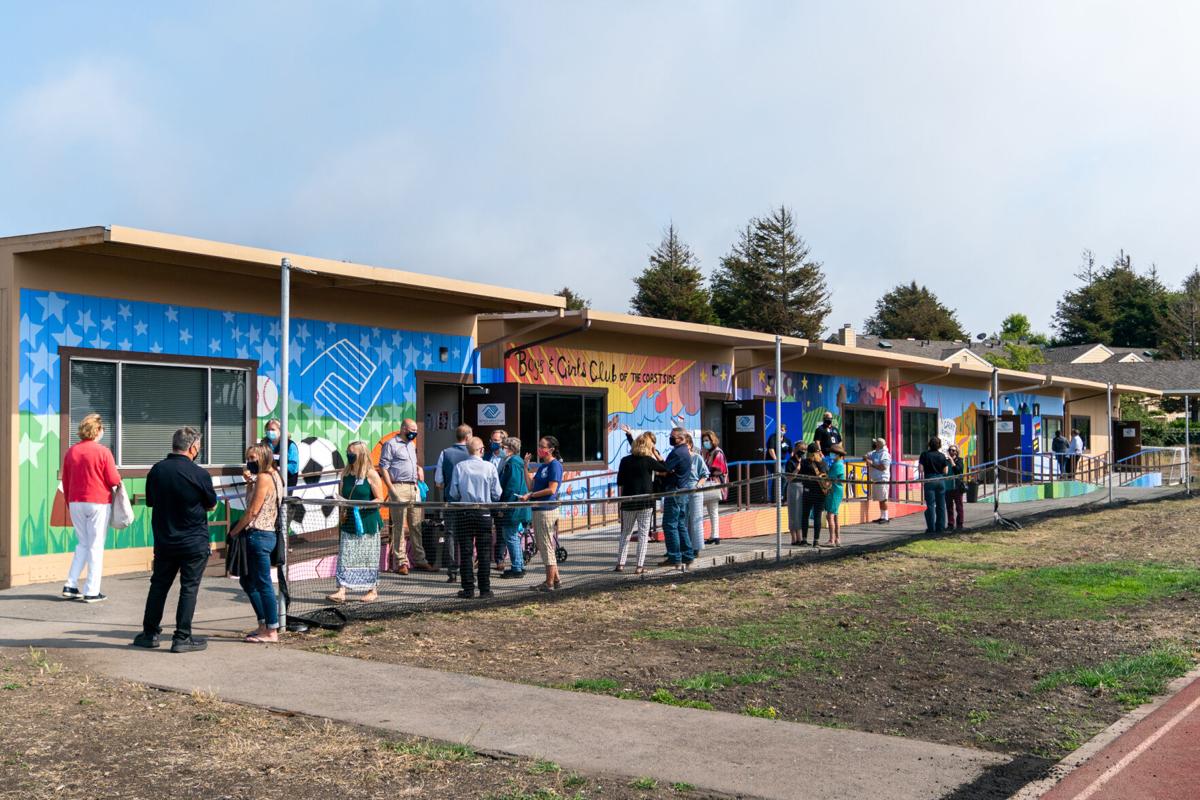 People gather and explore the classrooms dedicated to the Boys and Girls Club at Cunha Intermediate School during their ribbon cutting ceremony in Half Moon Bay. Adam Pardee / Review 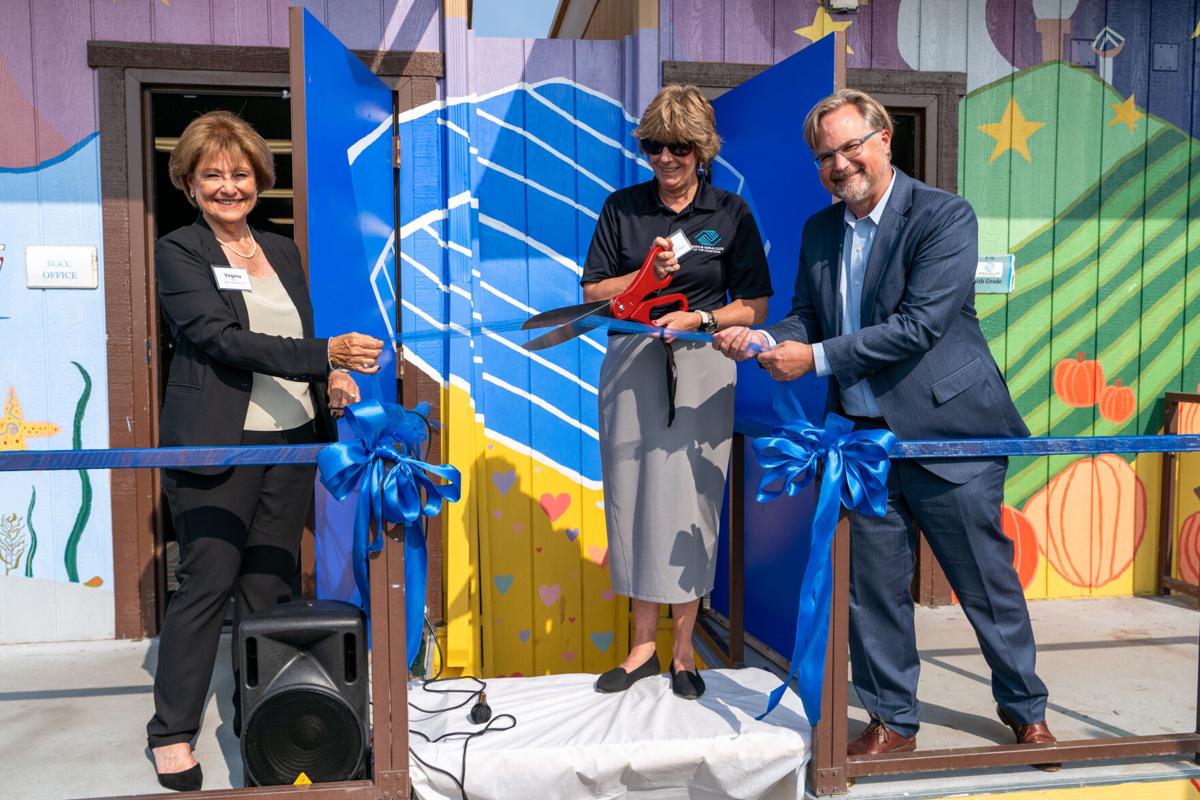 These days, the portable classrooms at Cunha Intermediate School, just beyond the soccer field, are visible to traffic on Highway 1. Before the Boys and Girls Club of the Coastside moved in, the portables could easily be missed, but now a colorful mural fills the entire face, bringing to life the vibrant youth organization that operates within.

“Before, the walls were brown and yellow and I didn’t take much notice of it, but now (with the new mural) I realize how warm it is,” said Jill Jacobson, executive director of the Boys and Girls Club of the Coastside. “It just makes the space much more personal.”

Jacobson was moved when club members showed parents the flowers they painted on the mural as they stopped by Thursday’s open house and ribbon-cutting ceremony.

Amanda Larson, education director at the club is also a community-based artist who specializes in working with communities and groups of people in helping to design and implement an art project in a public space.

While the mural is what immediately grabs attention, the excitement doesn’t end there. For the Boys and Girls Club and its members, the opening of the new, permanent space is a dream come true.

“Knowing the history and the process of the Boys and Girls Club to have this space, it’s just really exciting to be able to have so many rooms available and to have the teen center here,” said Larson. “We want to incorporate both of those programs and be able to strengthen those collaborations. It’s just really awesome.”

In June 2020, the club took over the four portables next to Cunha and, over the winter break of that year, added two more portables. Previously, it had been operating out of a single classroom on campus. The club was invaluable during the remote-learning phase of the COVID-19 shutdown of local schools because it gave students a socially distant, in-person, supervised workspace.

The new space consists of six refurbished portables, a garden, a maker space and a teen center.

Local supporters of the club and club members gathered on Thursday for a ribbon-cutting and open house to show off the new space. The event had originally been postponed due to COVID-19.

Thursday was also the first day of school on the coast, and while the club did have in-person learning services this past year, members are looking forward to more flexibility in activities. Previously the club was split into cohorts and activities were limited.

“It’s one of those things, like you don’t really appreciate it when you have good health, until you get sick,” Jacobson said. “I don’t think we really appreciated how much we enjoyed life until we all had to take a step back over the last 18 months or so. It’s a silver lining to just be grateful for the normal.”

Alex Padilla has only been in the U.S. Senate for four months, but California’s first Latino…

Kirsten Hagen, a Realtor with offices in Burlingame and Half Moon Bay, was honored with the …

Water agencies are eyeing another dry year across the state, and local water districts are t…

As part of a multiyear, statewide energy policy in California, Pacific Gas and Electric Comp…

When James Brumder and his wife, Louise Gonzalez, moved into their home tucked up against th…

Local author invites all to help save planet

“The Sea is Rising and So Are We: A Climate Justice Handbook” invites all to learn how to bu…