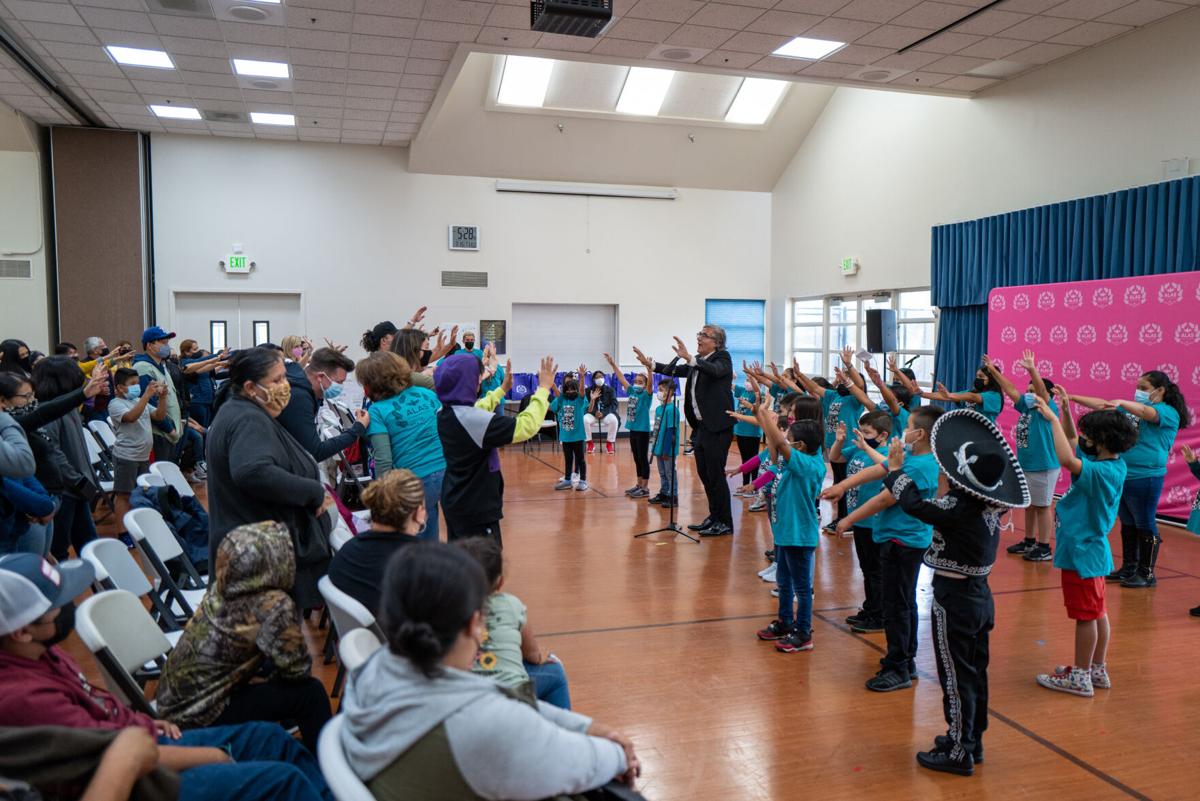 Claudio Santome leads the children of the El Jardin Summer Camp and invites the audience to participate in a vocal exercise at Ted Adcock Community Center on July 15. Adam Pardee / Review 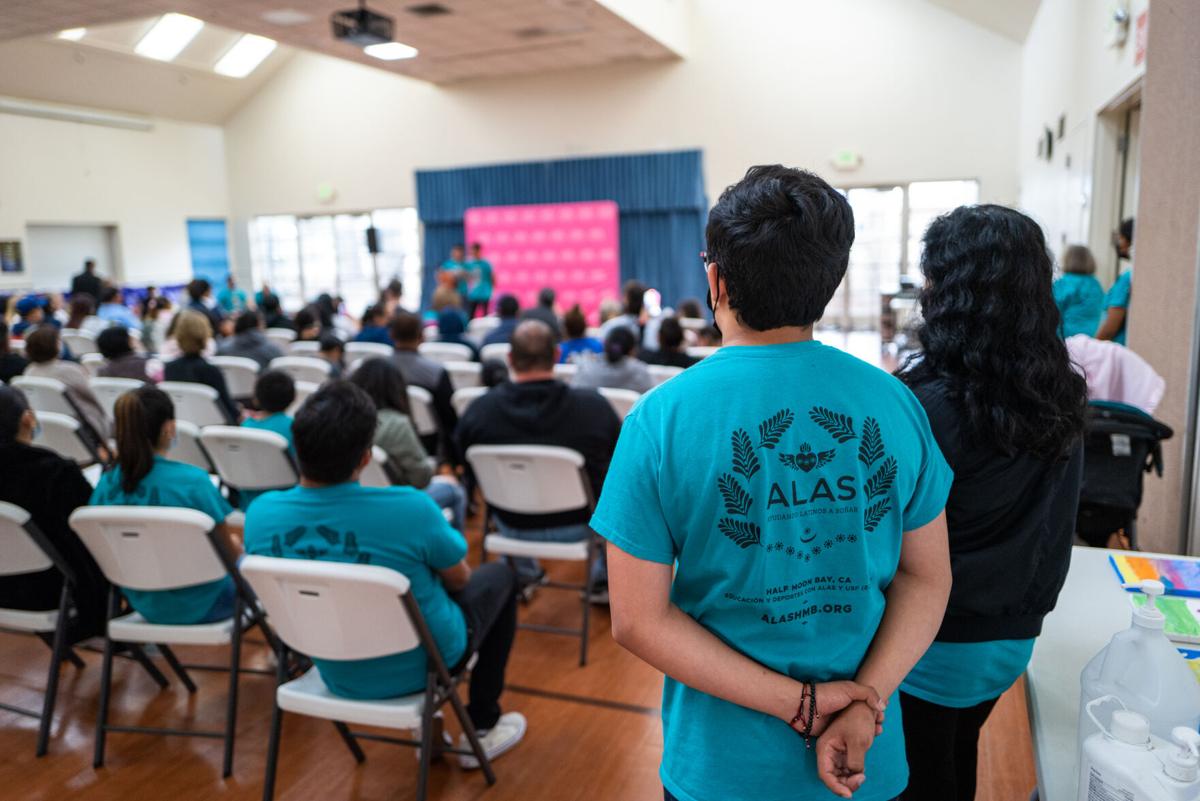 ALAS El Jardin camp counselors watch the campers they watched over all summer perform for their parents and friends at the Ted Adcock Community Center on July 15. Adam Pardee / Review 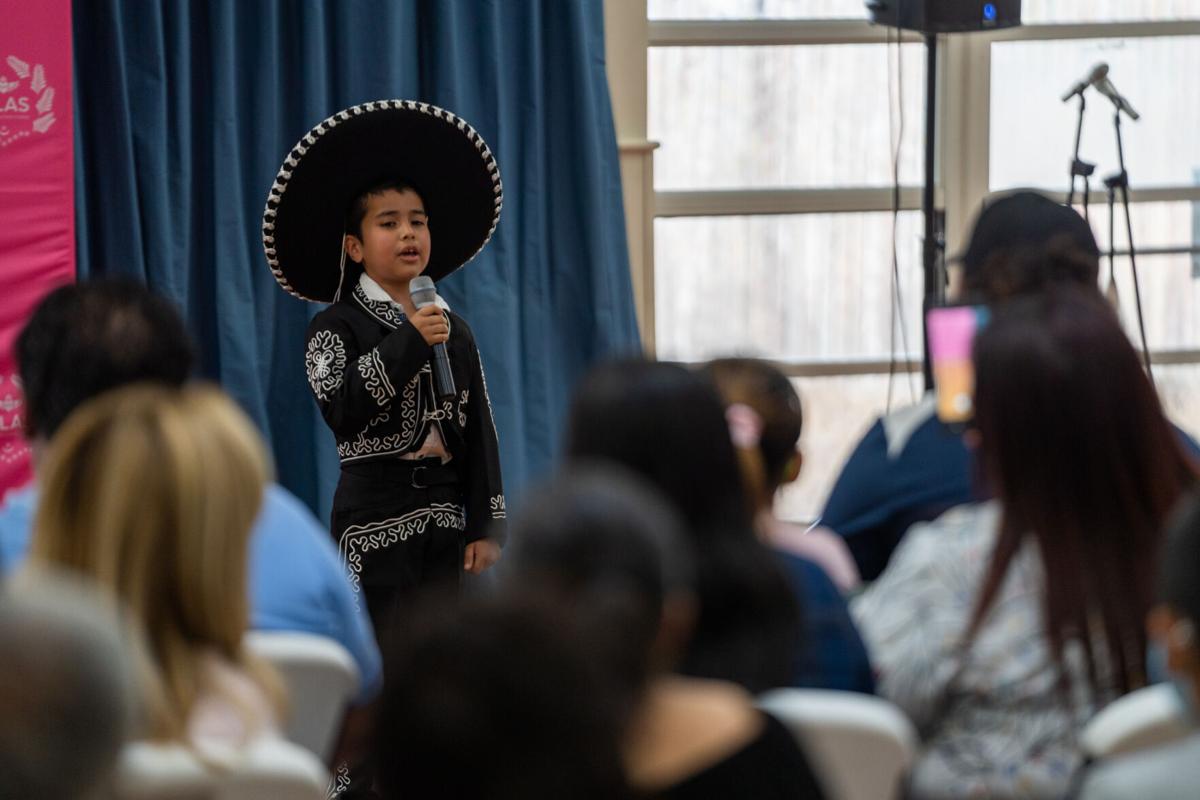 When Ayudando Latinos a Soñar identifies a need in the Latino community, the people behind the effort find a way to meet it. The pandemic has created no shortage of needs.

“We had a lot of parents reaching out, asking for help,” said Vanessa Rodriguez, an ALAS board member.

Latino parents voiced their concerns that their kids were falling behind after a year of online learning. They feared that they could not bridge the gap alone.

In response, ALAS created El Jardin Summer Camp. For five weeks, the downtown home of the cultural arts and social services center was alight with music and laughter.

“Our goal was to help heal the children from the pandemic and prepare them for reentry into school,” said the executive director and founder of ALAS, Belinda Hernandez-Arriaga.

When stay-at-home mandates were passed, non-English speaking parents suddenly had to support their children through online learning. Some did not have electronic devices or adequate internet services to ensure that their kids didn’t fall behind.

“During the pandemic, kids were learning at home through packets that were completely in English,” said Rodriguez.

Partnering with the University of San Francisco School of Education, ALAS created an immersive summer experience in education, art, music and community. Volunteer teachers worked to equip both children and parents with the resources they needed to succeed in school.

“We’ve made packets with parents that give them steps to help kids prepare for the return to school,” said USF Professor Jane Bleasdale. “And we made sure that everything is translated into Spanish.”

Equity gaps due to these same barriers were present prior to COVID-19, though the pandemic made them more apparent. Camp instructors have passed on lessons they have learned through teaching over the summer to the Cabrillo Unified School District in order to help bridge the gap, come fall.

“It’s important to look at immigrant kids as assets and ask, what do they bring to our community? How can we connect to them in culturally relevant ways?” said Bleasdale.

In addition to being out of school, many children were confined to their homes for extended periods. The toll of isolation on children’s mental health was evident at camp.

“The No. 1 barrier was reintroducing socialization,” said Rodriguez. “We had to get the fear out.”

As a licensed clinical social worker, Arriaga believes in the importance of cultural arts as a healing space for children. In particular, music and dance play a crucial role in empowering them to step outside of their comfort zone.

“Starting off, there were a lot of kids hiding in the corner,” said camp counselor Roman Rodriguez. “Five weeks later they were in the middle of all of it, starting the dances and singing the loudest.”

“We just want them to be free, to have fun, to be kids, and to be able to stimulate their creativity again after being shut down for so many months,” said Arriaga.

“If camp wasn’t here I would feel like I was locked up in a cage,” said one camper.

In the midst of a difficult year, summer camp became a lifeline towing children back to their normal selves. This is due to the unwavering sense of community that ALAS provides.

“COVID has been a lot of exclusion and isolation, and this is about inclusion,” said Rodriguez. “ALAS is about family; everything we do revolves around the support of family.”

The ALAS family has grown bigger in recent years. Children that learned to sing, dance and play instruments at ALAS are now camp counselors.

“You can see that the ALAS mission has grown in them,” said Rodriguez. “It shows that the community that we have been building is working.”

Evidence that the hard work of the ALAS community is paying off lies in the camp’s turnout. It was the highest ALAS has seen throughout all of its programs. Key partners and collaborators, including the National Charity League, International Flavors and Fragrances Inc., Half Moon Bay Library and Bay Area Border Relief, made the camp possible.

At the final recital, students shared what they had learned at camp with family and friends. Camper Jonathan Garduño, took to the stage to perform a solo, demonstrating not only the singing lessons he learned, but a great deal of confidence.

The song is called “Mochila Azul.”

No puedo leer no escribir.

It left me with great concern and low grades.

I don't even want to go out at recess, I don't have fun with anything.

I can't read or write.

Lyrics that will no longer ring true if ALAS can help it.

Such an uplifting story! Great work, ALAS and students!

Whatever your costume needs, soon you can secure just the right look at Fancy Pants Costume …

Live music returns to the Coastside

To Cafe Society owner Harpo Marx, a return to normal life wouldn’t be complete without live …

A masked and socially distant audience was able to enjoy a performance of “Love Letters,” di…

For Kai Guevara, graduating from high school and leaving Half Moon Bay is part of growing up…

During her four years at Half Moon Bay High School, Hayley Sperinde found her community.

Jackie Nabor knows her life will be different in the fall. She’s graduating from the comfort…