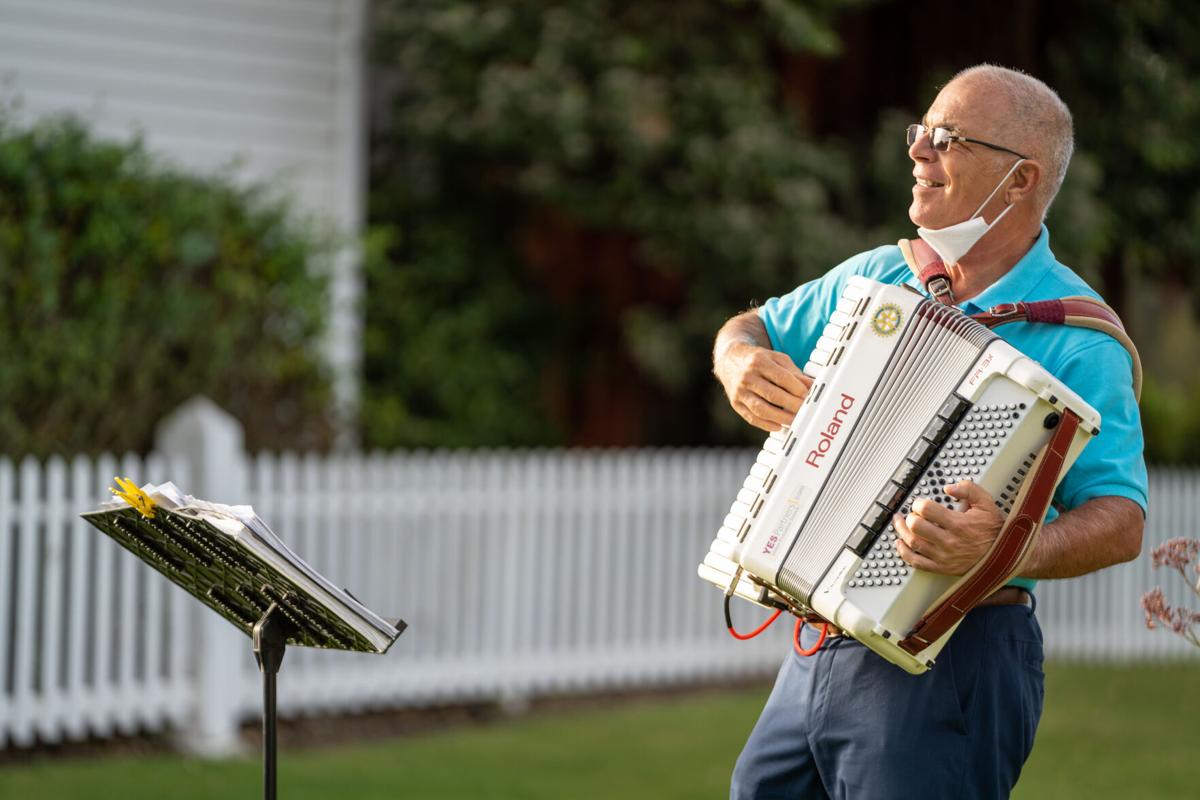 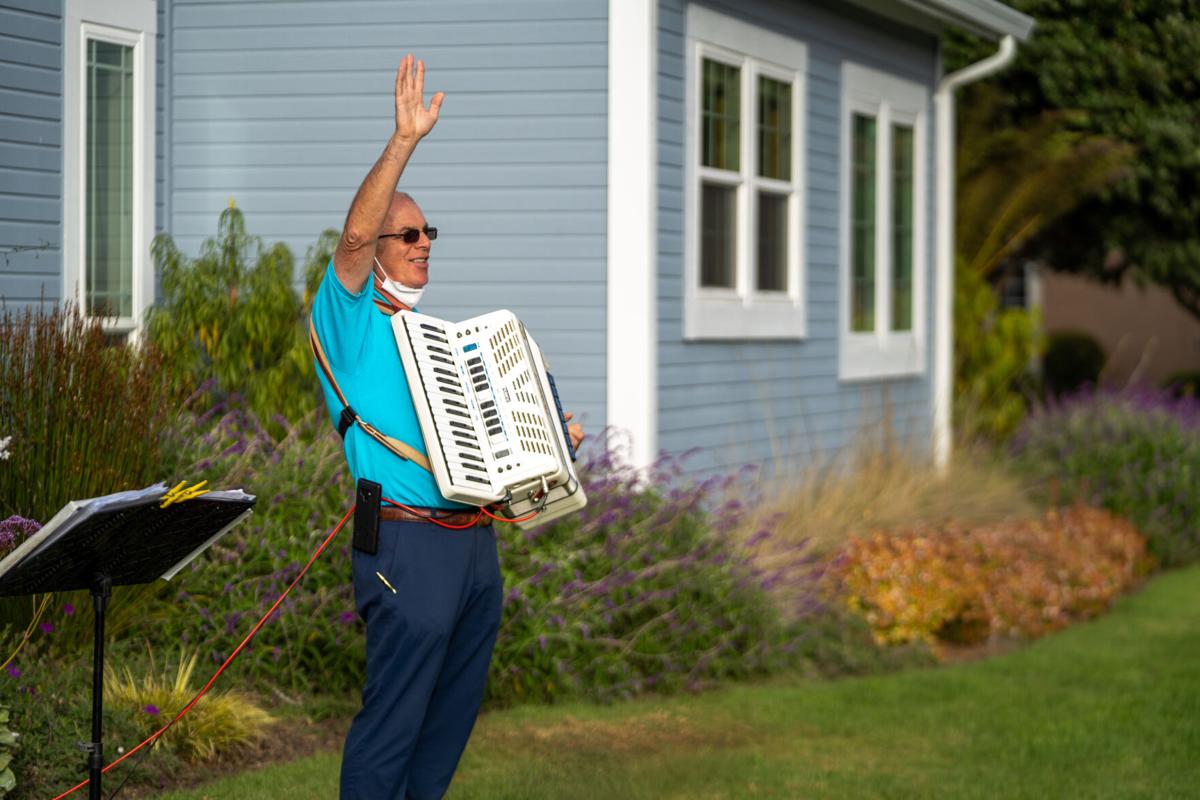 Between songs, Eliot Dieterle waves to a neighbor who stopped to listen to him play accordion in his yard in Ocean Colony on Friday, Sept. 25, 2020. Adam Pardee / Review 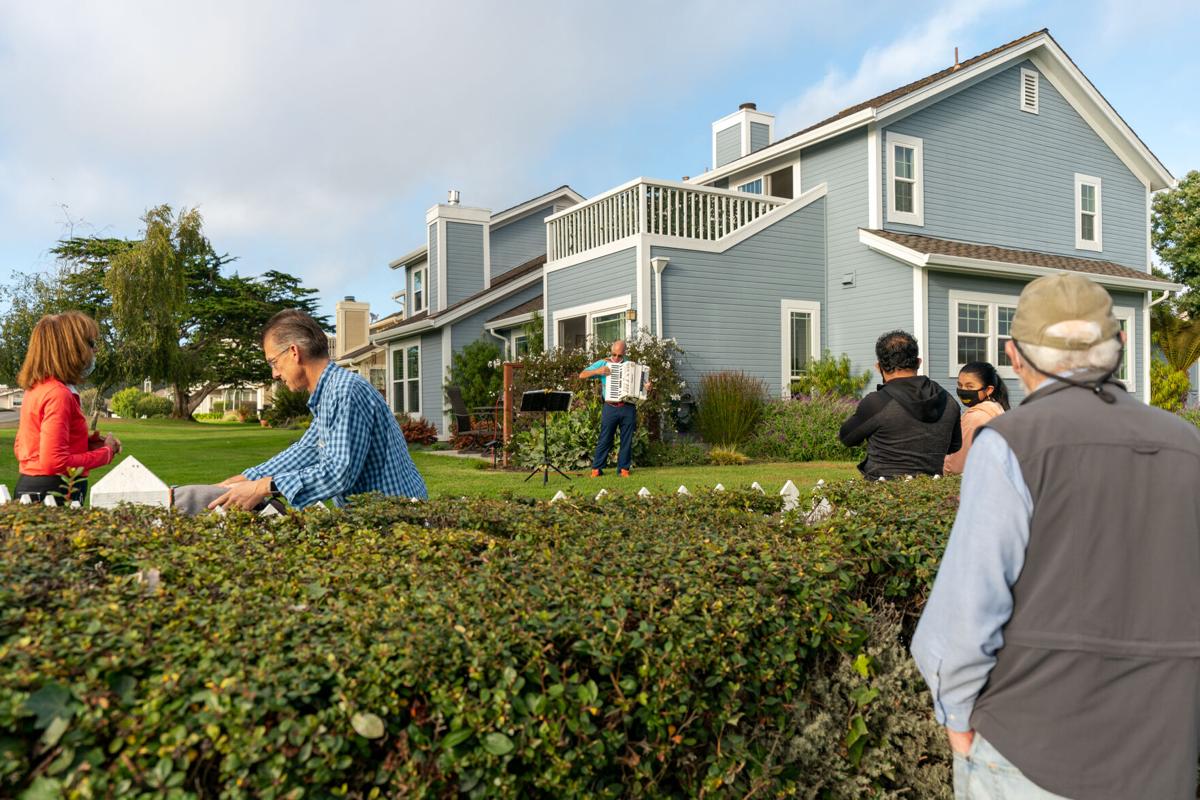 Between songs, Eliot Dieterle waves to a neighbor who stopped to listen to him play accordion in his yard in Ocean Colony on Friday, Sept. 25, 2020. Adam Pardee / Review

E.J. Dieterle stood next to his massive songbook while he played his accordion for over an hour, but for much of the performance he hardly glanced at it.

Dieterle, an Ocean Colony resident, played a variety of songs on his front lawn Friday evening while more than a dozen neighbors and passersby gathered on the street. With some wine in hand and the sun setting behind them, the audience listened to Dieterle’s eclectic accordion tunes amplified through speakers.

“Thank you for making the quarantine a little easier,” a bystander said at one point. Dieterle even played a song for two newlyweds driving by on a golf cart.

Dieterle played for neighbors every day from mid-March, when the state announced shelter-in-place orders until May 31, with the exception of one rainy day. Now, because of popular demand from Ocean Colony residents, he’s transitioned to monthly sessions, typically on the last Friday of the month.

“I heard from neighbors that they were playing music just because everyone was stuck, and that’s when I started it,” Dieterle said.

Dieterle originally hails from the German countryside, where he developed his affinity for music. He first learned to play the euphonium, a type of brass horn, then bass guitar, clarinet, saxophone and, of course, accordion. A Half Moon Bay Rotary Club member for the past 17 years, Coastsiders may recognize Dieterle for solo performances at the Half Moon Bay Brewing Co. and Cameron's Pub and Restaurant. But Dieterle displays his skillset and passion for music throughout the Bay Area.

He’s part of MusikatenStammtish, a multi-ethnic musical group combining Austrian, German and Swiss music that performed monthly at Esther’s German Bakery in Los Altos. He also manages a German-style Oktoberfest band called AlpineSound, which had 25 gigs over a two-month period last year. Because of the coronavirus pandemic, both groups have put their live shows on hold, leaving Dieterle with an itch to play some live music. Though he’s practicing virtually with fellow band members, playing for a live audience brings about a special kind of joy.

Dieterle said he grew to love the accordion while teaching himself because of its versatility and ability to emulate other instruments on its own. It works well solo or with a group, and it’s easily portable.

“What I love about this one is you can get traditional accordion sounds, like some Italian music I played,” Dieterle said of the model he used on Friday. “But, in addition, you get the tuba, trumpet, and all the other stuff.”

Simply put, Dieterle is a maestro with an accordion. He can slip seamlessly between international styles, including Austrian, Italian, Swiss and Mexican. He also played notable tunes such as the signature theme from Francis Ford Coppola’s “The Godfather,” “Edelweiss” from “The Sound of Music” and baseball’s classic seventh-inning “Take Me Out to the Ball Game.”

“The idea in these challenging times,” Dieterle told the socially distanced audience, “is just to bring some smiles out.”